Flying the Throne: TAP Air Portugal (A330) in Lie-Flat Business From Newark to Lisbon 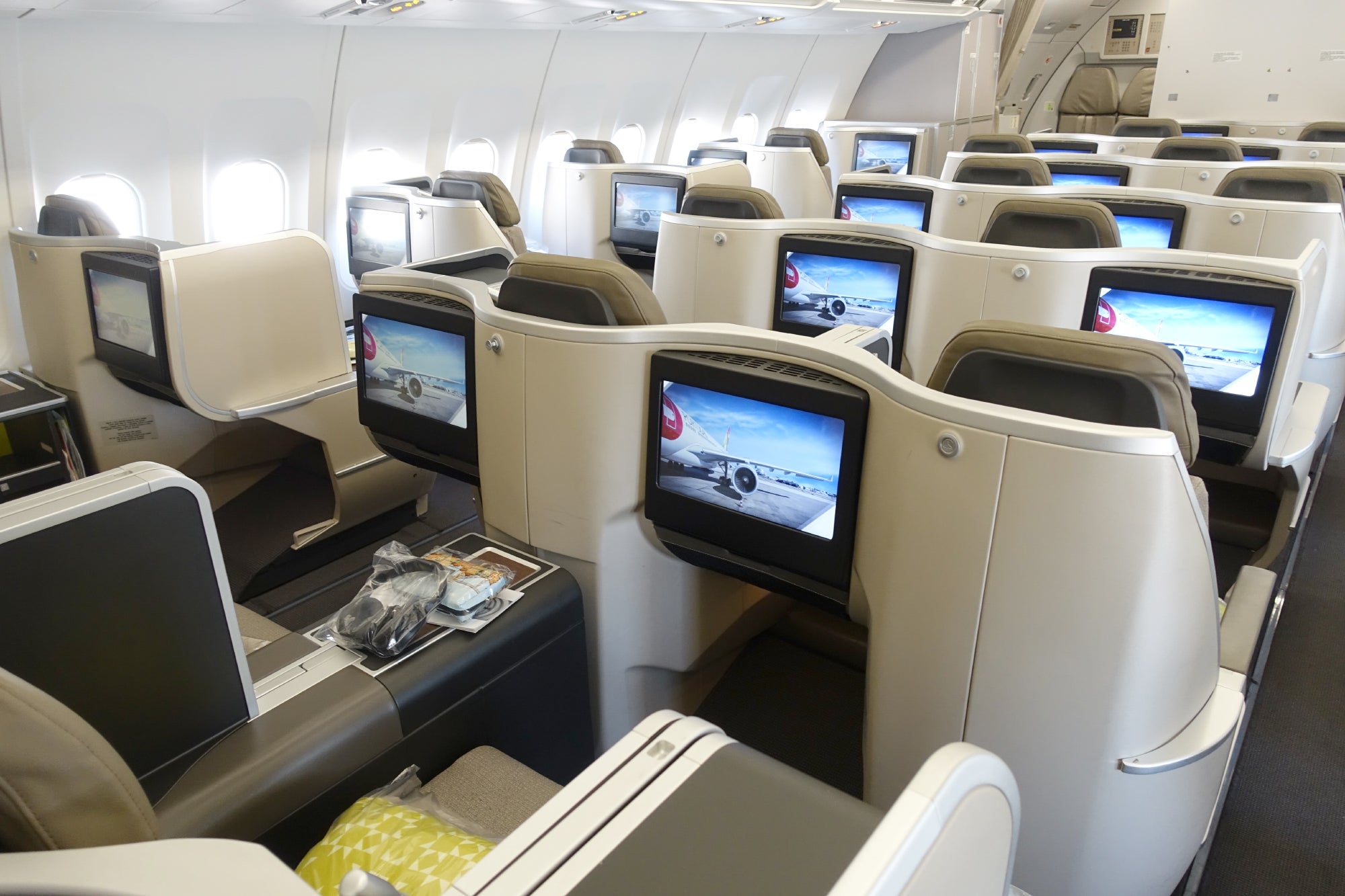 Until recently, TAP Air Portugal has offered a pretty lousy business-class product, but fortunately, those aging, angle-flat seats have since been replaced, first by a staggered model on A330s leased from Azul and then with an even better product on TAP's own A330 fleet.

While both seats are decent, they're easily upstaged by the product TAP's introducing with its first A330neo, when deliveries begin later this year. The airline's previous-generation seat will continue flying for a while, though, and given TAP's often-excellent award availability and decent paid fares, I decided to take one of the airline's retrofitted A330s for a spin on a recent trip to Europe for Norwegian's annual "Fill-A-Plane" flight.

I stumbled upon a decent one-way business fare of $1,397 about a month before departure, bringing me from Newark (EWR) to Copenhagen (CPH) via Lisbon (LIS). Even with that relatively low fare, our preference would have been to book with miles — had awards been available, I could have booked the trip for 55,000 Aeroplan miles, an American Express transfer partner, or 70,000 United MileagePlus miles, transferred instantly from Chase Ultimate Rewards.

I decided to credit my flight to United MileagePlus, earning me a grand total of 4,921 Premier Qualifying Miles and 6,152 redeemable miles, worth $86 based on TPG's valuations. We also earned nearly 7,000 Membership Rewards points, worth $133, since we paid with the Platinum Card® from American Express.

Most importantly, I had booked early enough to score access to one of two "throne" seats onboard, which offer substantially more personal space and privacy. It was sure to be a good ride.

As I outlined in a separate post, I decided to begin my journey at Terminal C so I could visit United's new Polaris Lounge, which long-haul Star Alliance business- and first-class passengers have access to as well. Though the lounge was fairly crowded, I had a great time, and transferring to my TAP flight from Terminal B was straightforward enough to make the extra effort worthwhile.

I arrived full after an hour at the Polaris Lounge but wanted to check out Terminal B's offerings, which included an SAS lounge and a pair of nearly identical Lufthansa lounges.

As a Star Alliance Gold member, I had access to the ever-so-slightly better-equipped Senator Lounge. It was more or less identical to the Business Lounge around the corner, but with a marginally more robust food and liquor selection.

There was a mix of hot entrees at the buffet, though there was no a la carte option like at the Polaris Lounge in Terminal C.

There were also salad fixings, sandwiches and wraps.

The self-service bar was nothing fancy but did the trick.

I arrived just before several Star Alliance departures, including SAS and Lufthansa flights, so there was a bit of a crowd.

After a few minutes, I walked the short distance to my departure gate, where I made my way aboard CS-TOQ, a 16-year-old A330-200 that flew for TAM beginning in 2002 before making its way to TAP's fleet in 2014.

This TAP seat is available on a handful of carriers and aircraft, ranging from Malaysia's A350-900 to flyDubai's new 737 MAX.

During its retrofit, TAP made the wise decision to remove the center overhead bins, giving the cabin a more airy feel. However, there was just barely enough space for everyone to store their belongings.

Some seats offered far more space than others, though — in general, I'd avoid the paired window seats, pictured below.

Aisle-facing aisle seats should also be avoided, if you can help it.

My top picks are TAP's two throne seats, 3J and 5J, since they offer far more space than any other seats in the cabin. After that, I'd grab the window-facing window seats at 3A and 5A, followed by the center seats with a second armrest, including 2F, 3E, 4F, 5E and 6F.

Of course, any business-class seat will offer a comfier ride than what you'd get in coach, although TAP's economy did look pretty decent — with 18 inches of width and at least 32 inches of pitch, you could certainly do worse.

After a minute checking out economy, I was feeling pretty fortunate to have grabbed 5J at booking — that amount of space was hard to beat for a transatlantic business product.

In addition to the two tables, I had a compartment to the side of the seat.

Plus another storage area above the left armrest.

And a small drop-down pocket for loose items just below the inflight entertainment system.

I also had a decent amount of space for my feet, though the footwell was a bit more compact than what I'd have gotten elsewhere in the cabin, since "throne" passengers were effectively tucking their feet under the center console in front.

The seat controls were simple — too simple, in fact. You were limited to four presets, so it was challenging to position the seat exactly the way I liked.

You could move to lie-flat mode with the push of a button, though, and I found the air-filled cushion to be comfortable in bed mode.

There was a fun amenity kit waiting at my seat, with a mix of products, including a dental set, hairbrush, eye mask, earplugs, socks, lip balm, cream and a pen, plus a mysterious sealed pouch that turned out to be a scented luggage freshener of sorts. I also got a decently large pillow and a comfy blanket, pictured above.

There were noise-canceling headphones, too — decent, but no match for my Bose set.

TAP had a high-definition on-demand entertainment system at each seat, with movies, TV shows, music, games and kids' programming.

There was a mix of new releases — not the most robust selection I'd encountered, but if you haven't flown recently there's a good chance you'll come across a few films you haven't seen yet.

There was also a diverse selection of television shows. I was surprised to see "Last Week Tonight with John Oliver" listed, for example.

And there was an airshow, too, with aircraft positioning, ground speed and more. It wasn't as modern as the moving map I've found on other new or recently retrofitted aircraft, however, so I got bored with that pretty quickly.

When I last flew TAP, in 2016, the catering was definitely a highlight — a smelly cheese I tried, in particular. So I was excited to see what was on offer this time around.

Our flight time was about six and a half hours in total, which didn't give the crew much time to get two meals out while also allowing passengers to get a good night's sleep. They were fairly efficient about the service, though.

The appetizers and drink cart appeared on the other side of the cabin about 40 minutes after takeoff, with the crew reaching my seat some 15 minutes after that. I enjoyed the shrimp appetizer, but the soup was only lukewarm by the time it got to me, and the bread was cold.

Similarly, the entree took too long to make its way from the other side of the cabin, sitting on the cart an extra 15 minutes. It was warm but not hot as a result, and the steak was tough, but I enjoyed the sauce quite a bit.

The crew came through with dessert about 90 minutes after takeoff — not terrible considering that the service felt like it was moving at a snail's pace. Sadly, that stinky cheese was only available on flights departing Portugal.

Finally, flight attendants came through with small boxes of chocolate, and I asked for some chamomile tea.

About an hour before landing, a flight attendant came on the VERY LOUD PA system and slowly read off all of the flight connections, waking everyone up. I was exhausted at that point, so I quickly fell back asleep, and must have just barely missed breakfast — I woke up again with the double chime, just before landing in Lisbon.

I had a comfortable and spacious seat, slept well and we arrived early, giving me a chance to grab a Portuguese custard tart at the lounge before continuing on to Copenhagen. All in all, it was a good flight.

TAP's business fares are also hard to beat, especially on one-way flights, where other carriers tend to gouge quite a bit. If you find a fare you like or award availability that works for you, I wouldn't hesitate to book TAP's A330 biz. And try to work in a Lisbon stopover if you can — it's a great city, and the perfect destination for a one- or two-day trip.