Articles
Nick Ellis joined The Points Guy in 2016 as an intern and is now Reviews Editor, primarily responsible for arranging, writing (some of), editing and publishing reviews of hotels and airport lounges along with helping manage, write and edit travel content.
Follow
Aug. 09, 2021
•
9 min read 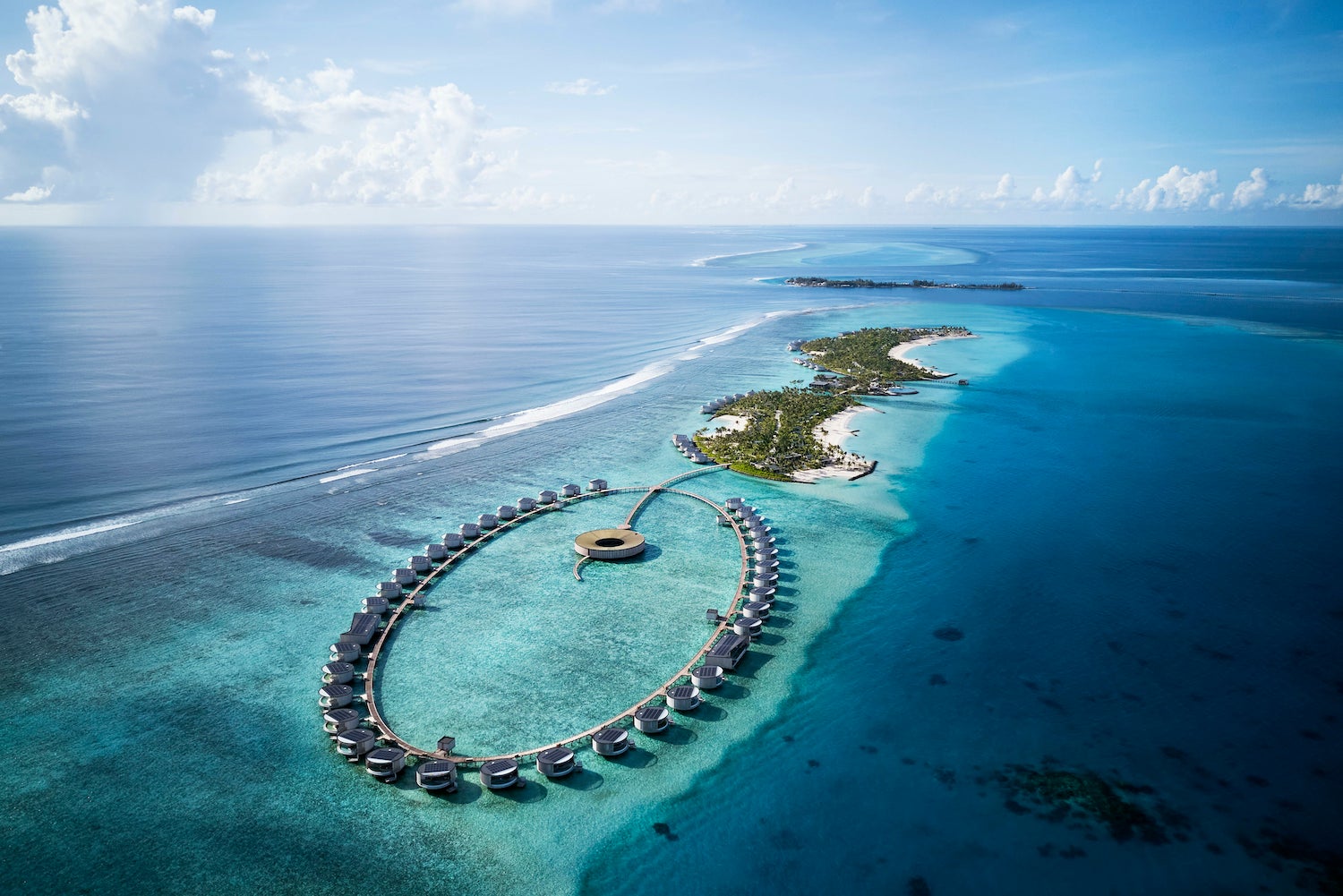 Construction stoppages and a near-total lack of demand for travel throughout much of last year meant few new hotels opened in 2020. This year, despite concerns surrounding the delta variant of the coronavirus, the travel recovery is accelerating and hotels are once again opening around the world.

After a year of staying at home, travelers are spoiled with more choices than ever for where to spend those dollars or points.

Let's take a look at some of the hottest hotels that have opened -- or are still set to open -- this summer.

Travelers heading to the Seychelles, one of the world's most desirable island destinations, now have another luxury resort to consider. Mango House Seychelles, LXR Hotels and Resorts, which opened in July, is part of the Hilton Honors family, meaning you can earn and redeem Honors points for stays and elite members will be able to leverage perks like room upgrades and complimentary breakfast. This exclusive resort features a total of 41 guest rooms and suites, as well as five dining outlets, three pools (one of which has an infinity edge), an emphasis on wellness and more -- all with views of the Indian Ocean.

Rooms can be had from 95,000 Honors points per night. Typically high cash rates make this property a great candidate for using points or the free-night certificates that come with certain Hilton cobranded credit cards like the Hilton Honors American Express Aspire Card.

Slated to open in September, the third outpost of Montage's rapidly growing Pendry brand will serve as an anchor of a new development in a freshly reinvigorated part of Manhattan near the brand-new Moynihan Train Hall and the still-developing Hudson Yards neighborhood. Pendry Manhattan West will feature 164 guest rooms, including 30 suites, a restaurant, lounge and an outdoor terrace bar. The rest of the development will be home to more than six million square feet of office space, gardens and retail that will include a "Peloton Studio" as well as a Whole Foods grocery store.

Hotel 1000 Seattle will join Hilton's LXR portfolio in August, becoming the growing brand's first foray into the Pacific Northwest of the United States. The hotel has 120 rooms and is well located in Downtown Seattle's Waterfront District, near Pike Place Market, the Seattle Art Museum and the city's business and shopping centers. In the hotel, guests can expect rooms with high-end residential-style furnishings, soaking tubs and freestanding showers.

Rooms can be booked from 90,000 Hilton Honors points per night.

Resorts World Las Vegas, which opened in June, is not just one resort but rather three resorts in one massive development -- the Las Vegas Hilton, Conrad Las Vegas and Crockfords Las Vegas, LXR Hotels and Resorts. Resorts World is a big deal for Las Vegas -- it's the first all-new development on The Strip in over a decade. The complex has a massive pool area, about 40 options for eating and drinking, a concert venue that fits 5,000 people and, of course, a massive casino and sportsbook.

Set on over 300 acres in between Santa Fe National Forest and downtown Santa Fe, New Mexico, Bishop's Lodge has been carefully restored -- with updates to original structures as well as new ones -- to reflect the history of this special piece of property, which came to be in the 1860s when the first archbishop of Santa Fe built a chapel and an adjacent lodge on the site.

A stay at Bishop's Lodge is all about embracing the setting around you. The hotel has a dedicated "adventure staff" to help coordinate activities both on property and in the local area; on-site stables with several horses; and a trout stream. Guests can also pamper themselves at the Turquesa Healing Arts Studio, ride horses to arrive at a special mezcal tasting and indulge in local cuisine at the property's signature restaurant, SkyFire.

The Big Easy has a new crown jewel when it comes to its hotel scene. The Four Seasons New Orleans opened just a few days ago at the end of Canal Street adjacent to the Mississippi River and near the city’s Central Business and Garden Districts, as well as the world-famous French Quarter. The hotel has 341 rooms and 61 suites, plus a spa, gym, rooftop pool and an observation deck on the 34th floor providing sweeping views over the entire city. Food is serious business in New Orleans and the Four Seasons doesn't disappoint on that front. It features several outposts for sampling the city's world-famous cuisine, including Miss River, helmed by Alon Shaya.

The Ritz-Carlton, Turks and Caicos

Marriott's Ritz-Carlton brand debuted at the end of June in the Turks and Caicos islands. The resort has 155 guest rooms and 27 suites offering guests views of the turquoise waters of Grace Bay Beach, along with two swimming pools; a Ritz-Carlton Club Level lounge; several restaurants and bars; a full-service spa; a fully equipped gym; a Ritz Kids club; a casino and more.

Another highly desirable Ritz-Carlton property opened at the end of June, this one in one of the world's most sought-after destinations: the Maldives. The Ritz-Carlton Maldives, Fari Islands is a brand-new resort located within the Fari Islands development, which also is home to two other resorts. The Ritz-Carlton has 100 villas in total, with a combination of beach and overwater accommodations. The resort also has an array of dining and drinking establishments, a fully equipped gym and, of course, a signature (and very eye-catching) spa where guests can treat themselves to a day of relaxation and peace.

The hotel boom in Nashville, Tennessee continues with the upcoming opening of the W Nashville in September. Located in the heart of The Gulch neighborhood, the W will embrace its local environment with a specially chosen soundtrack, "garden-to-glass" cocktails and, in true W fashion, inviting and oh-so-trendy public spaces. The hotel will have 346 rooms and suites; an outdoor pool and deck lined with cabanas and overlooking the surrounding neighborhood; a rooftop bar; two restaurants from Andrew Carmellini of the NoHo Hospitality Group and more.

While not an entirely new hotel, the Park Hyatt Toronto has undergone an extensive renovation and is preparing to open in September. The hotel and its guest rooms will exude the feeling of a high-end home, while the 17th floor cocktail bar known as the Writers Room will likely continue to be a popular watering hole for locals and visitors alike. This luxe hotel will also boast a "signature" dining experience when it opens, though details are not yet available.

As a Category 6 World of Hyatt property, award nights will cost you 25,000 points apiece. Remember, since Chase Ultimate Rewards points transfer to World of Hyatt at a 1:1 ratio, it’s easy to acquire the points you need for an award stay.

Another new hotel for Music City, the Hyatt Centric Downtown Nashville opened mere days ago two blocks off the city's world-famous Broadway. The hotel features 252 rooms, including 11 suites offering floor-to-ceiling glass windows with river views; several outlets for drinking and eating; a rooftop pool and bar and more. The hotel pays homage to Nashville with artwork created by more than 20 local artists.

Related stories
The ultimate guide to earning elite status with United cards
American Airlines forgot it had landing slots at JFK. Then it lost some of them.
After 19 months, United Airlines is officially suspending flights at New York's JFK airport — again
17 ways to earn lots of Marriott Bonvoy points
Featured image by Ritz Carlton Maldives (Photo courtesy of Marriott)
Editorial disclaimer: Opinions expressed here are the author’s alone, not those of any bank, credit card issuer, airline or hotel chain, and have not been reviewed, approved or otherwise endorsed by any of these entities.