How I'm saving $4,600 with points and certificates this Memorial Day

Articles
Andrew Kunesh is a senior editor at The Points Guy covering loyalty programs. He's been a miles and points fanatic since 2014 and previously wrote for Upgraded Points and Credit Karma. Outside of the travel world, Andrew is a cyclist, craft coffee aficionado and — despite now living in NYC — a Chicagoan at heart.
Follow
April 30, 2021
•
13 min read 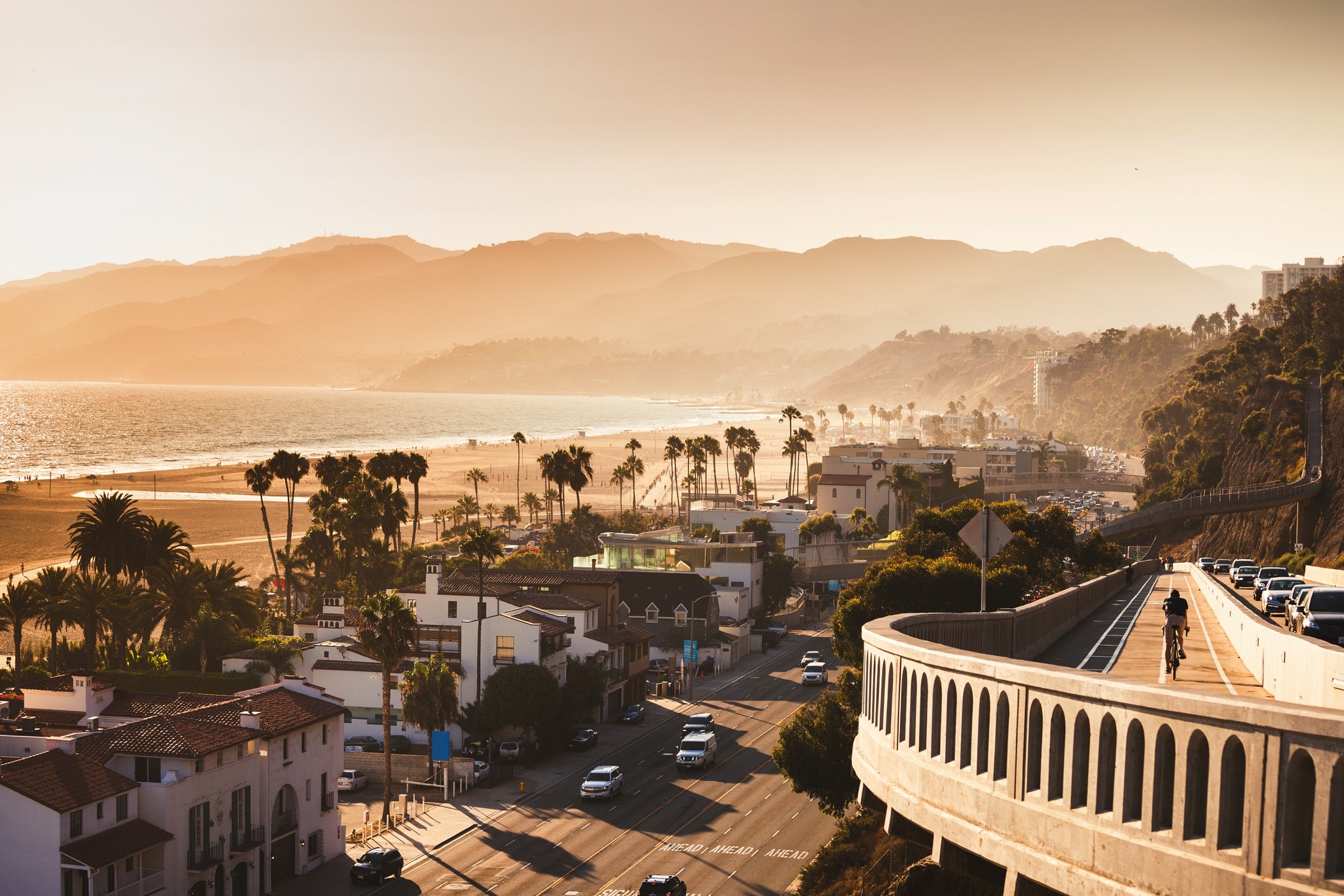 Memorial Day is coming up fast, so my girlfriend and I spent last weekend scrambling to come up with an itinerary and I. We tossed around a handful of destinations and settled on Los Angeles and Houston. LA for vacation, Houston to visit friends on the way home to New York City.

As you'd expect, however, LA isn't cheap Memorial Day weekend or the week after. So, we turned to our growing points balances for help in reducing the overall cost of the trip. This ended up saving us over $4,600 after redeeming points, miles free night certificates and other credit earned with credit cards.

Here, I'll show you how we booked our trip from New York to LA and Houston with points and miles. Use this article as inspiration for booking your own points-fueled domestic trip this year.

This is my girlfriend's first major vacation since the start of the pandemic, so I wanted to make it special. My requirements are flying a premium cabin from New York to LA. Economy class is OK for the other flights and we're not opposed to using low-cost carriers for short flights if there's a need. Here's a look at what we booked.

New York City to Los Angeles is one of the longest and most competitive routes in the U.S. Because of this, airlines have upped their game and fly either specially or internationally-configured aircraft on these routes. You'll find American flying its three-cabin A321T, United flying a new 787-10 and select Delta routes with true Delta One business class. Plus, JetBlue's Mint business class is on nearly all transcontinental routes from NYC.

All four of these products are great, so I started pricing out each option. Unfortunately, dynamic pricing made Delta and JetBlue incredibly expensive at over 50,000 miles one-way per person in business class. To make matters worse, American and United didn't have award space, so I had to get creative.

While not the ideal situation by any means, we ended up booking a business class flight from Miami (MIA) to Los Angeles (LAX). Flights on this route are operated by an American Boeing 777-300ER equipped with lie-flat seats, so it's hard to complain about comfort. This Web Special award cost just 21,000 AAdvantage miles per person one-way.

I wasn't super stoked on the idea of a short layover, however, so we booked a cheap Frontier Airlines flight down to Miami the night before. This gives us a Friday night in Miami before continuing to Los Angeles the following afternoon. We couldn't build the New York to Miami flight into our LA to Miami award because there was no award space.

Sure, we could've burned more miles or paid cash to fly directly from New York to LA, but this option is actually pretty fun after some consideration. My girlfriend has never been to Miami before, and — after months of being cooped up at home — exploring another city for a day isn't a bad thing by any means. Consider doing the same if your travel plans are flexible and you can't find award space on a hard-to-book route.

Want to stock up on American miles? Consider applying for one of these credit cards:

The information for the CitiBusiness AAdvantage Platinum Select has been collected independently by The Points Guy. The card details on this page have not been reviewed or provided by the card issuer.

Los Angeles to Houston was super easy to book. There's no shortage of flights on this route, and we opted to use 12,500 Delta SkyMiles per person to book an evening flight in Main Cabin economy. The cash flight cost $169 per person, so the redemption yielded 1.30 cents per point in value after taxes. I'd say this is a solid redemption for SkyMiles — especially since Delta award tickets earn Medallion Qualifying Dollars, Miles and Segments through the end of the year.

It's not the most luxurious flight, but it is operated by Delta's A220 aircraft. This is one of my favorite planes in the sky, and I'm excited to fly it again.

You can earn Delta SkyMiles with these credit cards:

Unfortunately, there was no great award space available from Houston to New York, so we used Delta flight credits from a canceled flight to book paid tickets. We booked paid first-class tickets, which cost just $125 more than Main Cabin per person, and it helped us both use the entirety of our flight credit.

Related: How I leveraged credit card perks to save almost $800 on a trip to Chicago and Boston

Another huge part of this trip is hotels. We have one night in Miami to account for, two hotels in LA and one in Houston. We're planning to spend three nights visiting friends in Long Beach and another three nights in Santa Monica when in LA. Then, we'll spend two nights in Houston.

Here's how we booked our hotels.

We'll have roughly 24 hours in Miami, so I looked for a place near the airport but not at the airport. I wanted a place where we could be in the city but close to the airport when we fly to LA the following afternoon. Thankfully, Miami airport isn't far from downtown, so this was an easy feat.

I booked us a night at the AC Hotel Miami Midtown using a 35,000-point Marriott free night certificate. It's nearby the Wynwood neighborhood — my favorite in Miami — and an easy trek to/from the airport. Further, the cash rate was $313 after taxes and fees, so it was an excellent use of the certificate. I earned this certificate with the Marriott Bonvoy Business® American Express® Card, so the stay more than offsets its annual fee.

Here are a few great credit cards you can use to earn Marriott points:

Related: The best Marriott properties for every budget in Miami Beach

Long Beach is our first stop in California. We'll stay there for three nights when visiting friends in the area. We ended up booking the Hyatt Centric The Pike Long Beach for 12,000 World of Hyatt points per night. My girlfriend transferred 36,000 Chase Ultimate Rewards points to Hyatt points to cover the booking.

The same booking would have cost $708.13 after-tax, so we're getting just under 2 cents per point in value. This isn't the world's best redemption but still saves a huge out-of-pocket expense. Plus, the property's location is great and puts us near where our friends live.

Related: How to redeem points with the World of Hyatt program

We're also spending three nights in the Santa Monica area before heading to Houston. Santa Monica and Venice Beach are my favorite places in Southern California. At the same time, hotels are expensive in Santa Monica from both a points and cash perspective, so I had to get creative.

Another great part of LA — Marina Del Rey — is located just down the coast from Santa Monica. Plus, prices there are a lot more reasonable. I booked three nights at the Marriott Marina Del Rey for $688 after taxes with the AAA Hot Deals rate. .

Related: Promotions that will make your next hotel stay more rewarding

We're visiting Houston to see friends who are also visiting the city over Memorial Day. They're staying downtown, so we tried to pick a property nearby.

In the end, we decided to book the Hyatt Regency Houston for two nights by transferring Chase points to World of Hyatt. This property costs just 8,000 World of Hyatt points per night. The same two-night stay cost $372.06 after-tax, so we got a huge 4.6 cents per point in value. This is an excellent redemption value for both Hyatt and Chase point.

Related: What is World of Hyatt elite status worth in 2021?

In the end, we saved $4,605 by redeeming 119,000 points and miles, one hotel certificate and $300 in hotel credits from a credit card. This made an otherwise impossible trip feasible and let us travel in style. This reminds me just how powerful points and miles are for domestic travel and makes me even more excited for international travel to resume soon.

Related stories
Here are the best Black Friday travel deals of 2022
Great deal: Book business class tickets at premium economy prices with this Avianca LifeMiles sale
Holiday gift guide: TPG’s 22 travel-friendly picks for 2022
Vail Resorts lift-ticket sales capped; buy your Epic Pass by Dec. 4
Featured image by (Photo by Natalia Macheda / Shutterstock.com)
Editorial disclaimer: Opinions expressed here are the author’s alone, not those of any bank, credit card issuer, airline or hotel chain, and have not been reviewed, approved or otherwise endorsed by any of these entities.