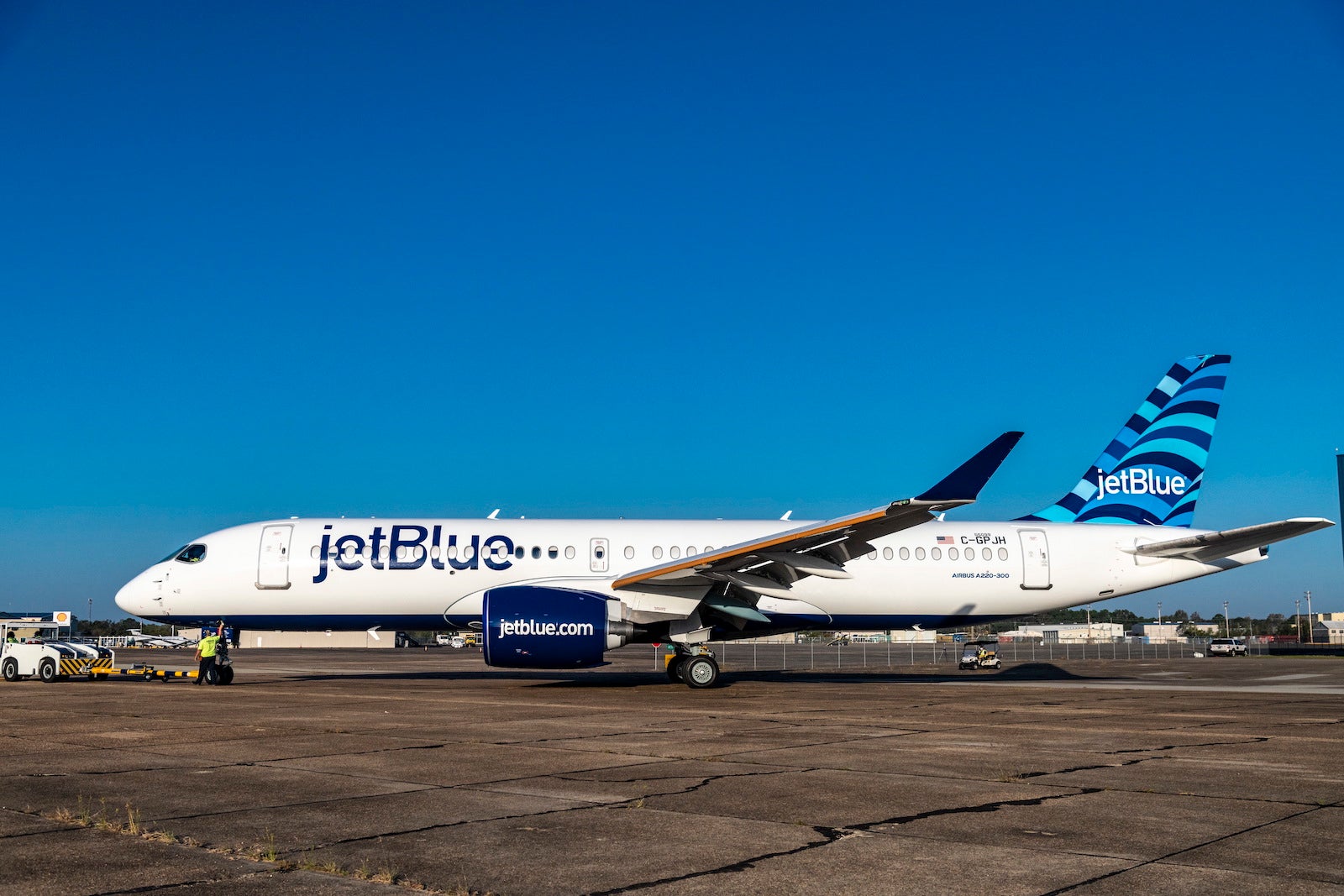 JetBlue to offer free COVID testing as it looks towards more travel returning in 2021
This post contains references to products from one or more of our advertisers. We may receive compensation when you click on links to those products. Terms apply to the offers listed on this page. For an explanation of our Advertising Policy, visit this page.

JetBlue Airways will begin offering free COVID-19 testing at its New York-JFK terminal as part of its focus on the safety of flyers and staff as it looks to the new year.

The hometown carrier will offer any travelers and staff — not just its own — free tests at new site in Terminal 5 at JFK airport, JetBlue president Joanna Geraghty told TPG in an interview as part of Airlines Week at the 2020 TPG Awards. Walk-in testing will be available, though results will take up to 48 hours.

This is only the latest in JetBlue's coronavirus pandemic response. The airline has doubled down on its "safety from the ground up" initiatives keep travelers and employees safe even as it moves towards selling all seats again on Jan. 8.

"We know there is a lot of pent up travel demand," said Geraghty. "As case counts get under control and people get more comfortable flying, we want to be there."

And the focus on local case counts is important. While some people are willing to visit relatives or go on holiday, many others are not as COVID-19 infections hitting record levels around the U.S. New cases nearly topped 200,000 on Nov. 12 — a national record — and the seven-day moving average stood at 157,112 daily infections and rising on Nov. 15, according to Centers for Disease Control and Prevention data.

Many corporations are holding off on allowing the majority of their staff return to the road until case counts come down again. This will put a damper on airlines' recovery — including JetBlue — for some years to come.

But Geraghty believes the airline has positioned itself well for that recovery.

Free coronavirus testing is just one thing JetBlue flyers can look forward to into 2021. Cleaning and mask requirements will remain in place, and so will travel flexibility after the airline dropped change fees, said Geraghty. In addition, inflight service on both its posh Mint flights and on its standard, all-economy seat flights will slowly return.

But JetBlue has more up its sleeve for the new year, even with safety precautions in place. The carrier will debut its all-new Airbus A220 sometime early in 2021 after the first jet arrives in December. Geraghty was mum on where the plane will initially fly, though she did say the aircraft could help restore some of the suspended routes it previously flew with Embraer E190 jets — albeit at a lower frequency.

Prior to the pandemic, JetBlue concentrated its E190s at its Boston (BOS) base, according to Cirium schedule data. The jets also flew up and down the East Coast on thinner routes from Fort Lauderdale (FLL), New York-JFK and Orlando (MCO).

The carrier plans to replace its 60 E190s with A220s. However, the timeline remains in "flux," said Geraghty.

The Airbus A321LR is another new jet that will join the JetBlue fleet in the new year. An extended range version of the A321neo that the airline already flies, three A321LRs are due in 2021. The jets will allow JetBlue to add London to its map by the end of the year.

What London airport JetBlue will serve was another topic Geraghty was mum on — except to say that flights will begin in the "back back half" of 2021.

Related: JetBlue says likelihood of London Heathrow flights has improved because of pandemic

London is not the only addition flyers can expect for JetBlue's map next year. The airline plans to implement a new partnership with American Airlines that, according to Geraghty and JetBlue CEO Robin Hayes, will create a strong third competitor to Delta Air Lines and United Airlines for travelers in the Northeast.

While details of the new tie-up are scarce until the airlines receive sign-off from U.S. authorities, the pact will include a codeshare covering at least 60 American routes and 130 JetBlue routes — primarily from Boston and New York-area airports. Executives have mentioned the possibility of shifting slots at JFK and LaGuardia (LGA) so JetBlue flies more shorter flights — like ones to Pittsburgh (PIT) or Richmond (RIC) — and American longer international flights.

In addition, the pact is expected to include reciprocal frequent flyer benefits for members of both airlines' loyalty programs. And on Tuesday, American chief revenue officer Vasu Raja teased the possibility of reciprocal upgrade benefits for elite flyers as well.

"We'll really be able to leverage having a robust legacy carrier partner," Geraghty said about the benefits to JetBlue.

Related: Register now for this Friday's TPG Talks on the TrueBlue loyalty program

The partnership complements the more than 60 new routes that JetBlue plans to launch this year. The focus of those additions are new bases in Los Angeles (LAX) and Newark (EWR), as well as new seasonal service to Montrose (MTJ) near Telluride in Colorado and a greatly expanded presence in Hartford (BDL).

The additions come even as JetBlue flies significantly less than it did before COVID. The airline plans to fly just 53% of its 2019 schedule in November and roughly 63% in December, Cirium shows.

Geraghty said more out-of-the-box route additions are likely where JetBlue sees "customer demand" in 2021. However, she stops short of saying the airline aims to resume its 2019 schedule by the end of 2021, citing the many uncertainties that remain in the recovery.

Featured image by Tad Denson - Airwind.com
Editorial disclaimer: Opinions expressed here are the author’s alone, not those of any bank, credit card issuer, airline or hotel chain, and have not been reviewed, approved or otherwise endorsed by any of these entities.
Related stories
News
The 5 biggest hotel industry changes that could affect your next stay
News
7 reasons we're obsessed with Aruba's new family-friendly Embassy Suites Resort
Guide
The best increased card offers to sign up for this February
Deals
2-for-1 Valentine's Day sale on business class to France and Italy