CEO chat: Frontier bucks pandemic trend with growth, but says masks are a must 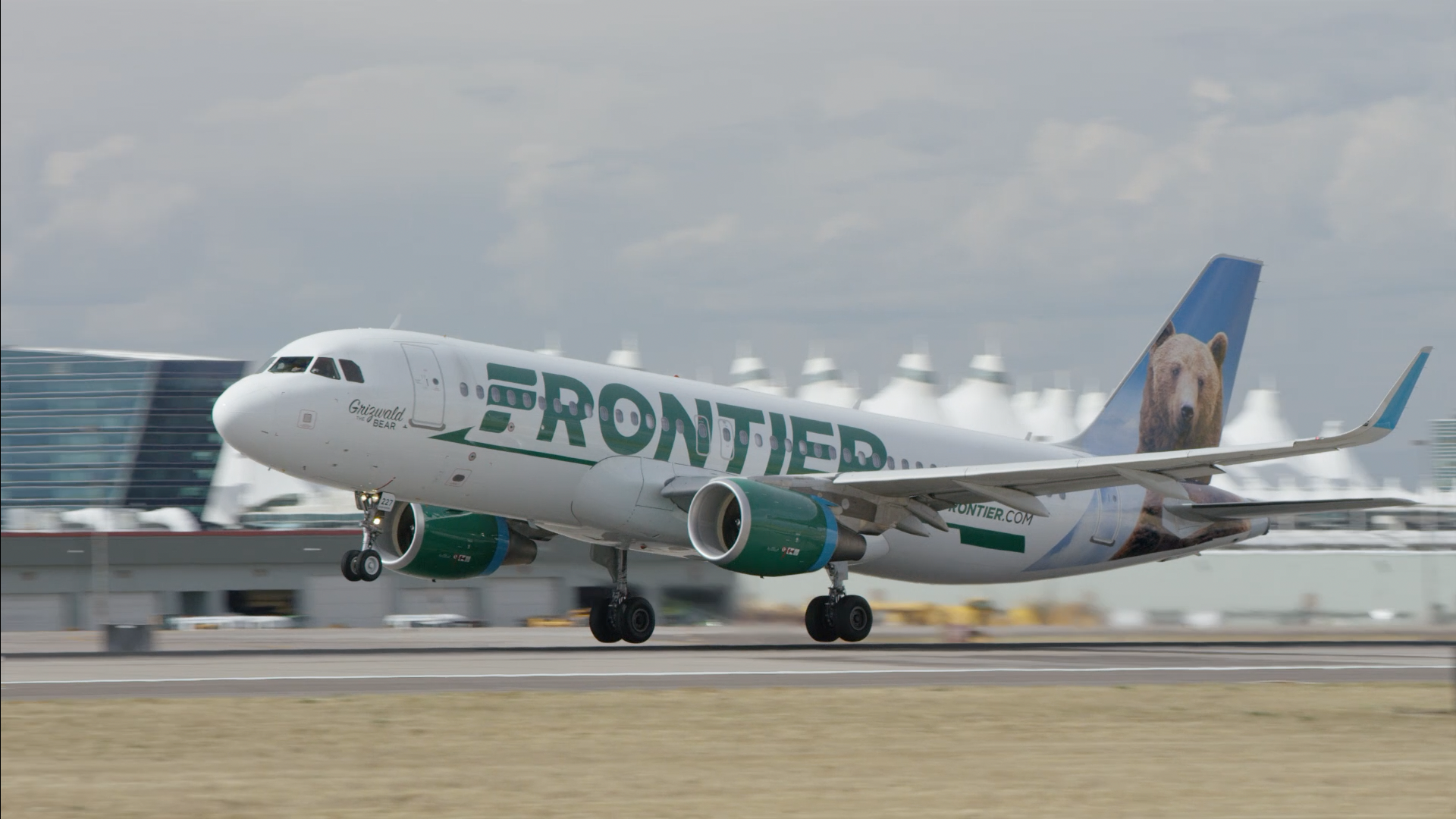 CEO chat: Frontier bucks pandemic trend with growth, but says masks are a must
This post contains references to products from one or more of our advertisers. We may receive compensation when you click on links to those products. Terms apply to the offers listed on this page. For an explanation of our Advertising Policy, visit this page.

A lot can be said about Frontier Airlines' strategy over the past few years. The carrier isn't known for its passenger comforts, but its aggressive growth has turned it into true national discounter and one whose growth barely slowed even during the coronavirus pandemic.

Now, as it stays in growth mode, the Denver-based carrier is staying true to its former tagline as "A Whole Different Animal." While the majority of the industry zigged during the pandemic, gradually adding back flights, Frontier zagged. It's restored many flights and even unveiled 18 new routes to take advantage new travel patterns emerging during this summer's nascent recovery.

"We’re pretty pleased with the recovery so far," Frontier CEO Barry Biffle told TPG in an exclusive interview. Travelers "want to be outdoors, they want to go to a lake, they’ll go to a beach... They’ll come to Colorado" -- which is conveniently Frontier's home state.

Biffle is not kidding when he says people want to travel. Frontier expects its flights to be roughly 70% full in June, an impressive number considering fewer than 20% of the airline's seats were filled during the depths of the crisis. Still, the number is also off of a low base; Cirium schedule data shows it flying only around 45% of it did this month a year ago.

But Frontier's numbers are also better than many of its competitors. Alaska Airlines only anticipates filling around half of the seats on its flights in June and American Airlines about 62% of its seats. Spirit Airlines, the nation's biggest ultra low-cost carrier, projects to fill around 60% of seats, according to its latest guidance.

"The improvement in demand continues to be driven by leisure travel, while corporate remains non-existent," Cowen analyst Helane Becker wrote earlier in June. This means airlines like Frontier and Spirit, who generate almost all their revenues from holidaygoers, are likely to recover first. Airlines that rely more on corporate pocketbooks, such as American, Delta and United, could recover at a slower rate.

Biffle does not think Frontier's low fares and holiday-oriented map are the sole drivers of its recovery. Instead, he believes the airline's clear and early messaging on safety from the coronavirus is a big driver that gives people confidence to fly. The new procedures include everything from enhanced cleaning onboard its Airbus A320 family jets, to temperature checks prior to boarding and a policy mandating that masks be worn onboard.

“We saw our sales nearly double when we announced masks," said Biffle. "What that tells you is that those customers went, ‘aha, that’s [someone] I’d like to travel with.'"

Biffle was not afraid of wading into the debate over wearing masks to prevent the spread of COVID-19. If a traveler is going to fly a Frontier flight, they better wear mask.

"We’ve made it very clear that we require it," he said. "We’re not an airline that’s friendly to come onboard and [then] we’ll just pretend you wore a mask.”

Biffle would not say whether Frontier will ban a traveler who refuses to wear one as some of its larger competitors have done. However, he would say that cabin crews are instructed in a "de-escalation protocol" that includes notifying flyers that non-compliance could be considered a federal offense.

The subject has made the news with other airlines recently. American made good on its threat to ban flyers after a public challenge by a self-proclaimed online provocateur who refused to wear a mask on a recent trip. Delta and United also say they will also bar travelers who refuse to wear masks onboard, with Delta CEO Ed Bastian calling it a matter of "respect."

Related: Frontier is now screening passengers’ temperatures, a first in the US

Frontier is also the only U.S. airline checking the temperature of each traveler before they board a flight. This is done with a scan of the forehead during boarding and has not, as yet, raised any outcries from passengers or negatively affected operations, said Biffle.

But Biffle does not think Frontier, nor any airline, should be checking passenger temperatures at the gate. He supports the Transportation Security Administration (TSA) taking this over — something the agency said it was evaluating in May — in a move that would help prevent an infected traveler from spreading the virus in an airport.

"From a practical perspective, TSA is probably the best place" for temperature screenings, said Biffle. "People are already there, and given the [screening] volumes they have the headcount."

It is hard to say how much Frontier's safety emphasis is driving the people onto its flights. As Josh Barro at New York Magazine put it, every airline is marketing cleanliness with the hope it will attract would-be flyers who are wary to climb back aboard an airplane "at any price."

Not everything Frontier has done has worked. An added fee that travelers could pay to keep the middle seat open next to them for "extra peace of mind or simply additional comfort" was rolled back within days of its debut after a public outcry.

"There was a lot of confusion," said Biffle of the so-called "More Space" fee that he said was rolled out in response to passenger demand and not to provide social distancing onboard. Frontier was developing the offering prior to the pandemic and will likely offer it again once the recovery is firmly in place, he added.

Frontier is ramping up its schedule and resuming its fast-paced growth. By September, the carrier plans to operate about 75% of what it flew last year, and 80% to 90% of its 2019 schedule by year-end, said Biffle. It aims to surpass 2019 flying levels next year, which would be an impressive feat given multiple estimates project that it could take the broader industry up to five years to return to those levels.

On top of this, Frontier will add two new routes and expand service on 12 others this winter. One place where it is expanding is Cincinnati (CVG), where the future of Delta's long-standing base is in question with the closure of its pilot base there by the end of the year.

"We’re a growth airline and we’re still taking delivery of a lot of aircraft this year, so we have to grow," said Biffle. Frontier did not delay or cancel any deliveries of new jets due to the pandemic but will take fewer A320neos than planned due to the temporary closures of Airbus' assembly lines.

Related: These are the up to 1,000 airplanes US airlines could send to the boneyard

With growth still very much on the Frontier playbook, Biffle is not overtly looking for openings created by the crisis. Some opportunities at airports that are restricted by gates or slots may present themselves, but the airline's expansion is limited by its Airbus orderbook, he said.

Other airlines are publicly using the crisis as an opportunity to grow. Southwest Airlines commercial chief Andrew Watterson told TPG in May that the carrier expects to repeat its history of capturing "substantial demand post the downturn." The airline plans 11 new routes this winter and a nearly full schedule — though not a full map — by year-end.

“It’s been a lot of hard work and hopefully people are good about travel," said Biffle. "I just hope there are more masks that are required in a lot more states so that we can slow down the spread that’s starting to pop up in a few places.”

This is the third in our "CEO chat" series of interviews with airline executives on how they are navigating the recovery from the coronavirus pandemic. Read the our interviews with the leaders of Cape Air and Spirit Airlines.