My experience flying across the country during the coronavirus pandemic

Articles
Benji Stawski is a former reporter for the site, covering all things points, miles, credit cards, travel and aviation.
May 06, 2020
•
11 min read 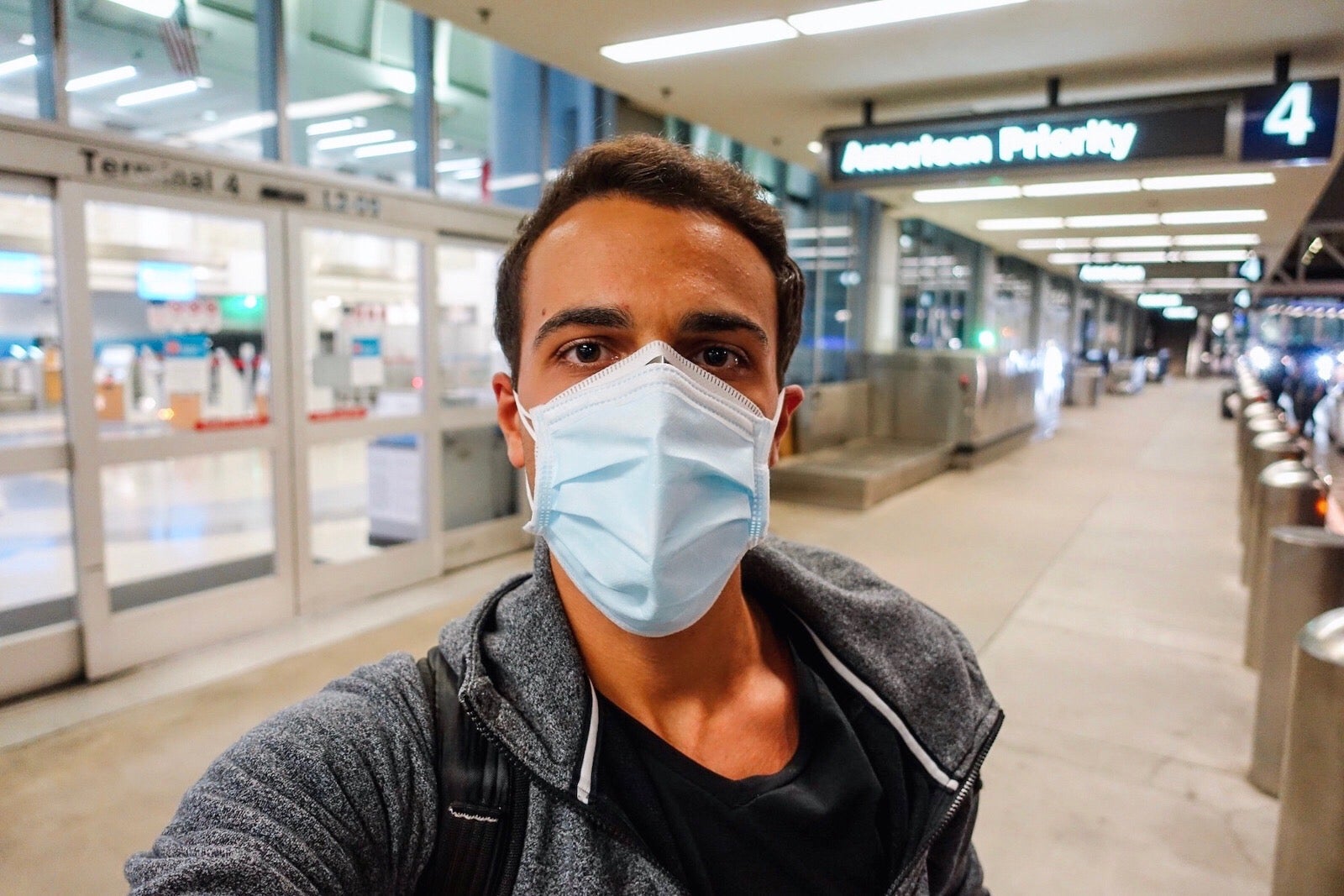 Editor’s note: At TPG, our top priority is providing our readers with the information needed to make educated decisions about travel and rewards-earning strategy. This is not the best time to travel, domestically or internationally. But we are sharing this information to provide value for essential travel plans you may have.

Last Thursday, I flew from Los Angeles (LAX) to Boston (BOS) amid the global coronavirus pandemic. The TPG team has paused all work travel and does not recommend any nonessential trips at this time, but this was urgent.

Prior to my flight, I saw a mix of photos of completely empty planes and ones that were jam-packed so I didn't really know what to expect. Although demand for air travel is at a record low, airlines have been canceling and consolidating their remaining flights to try to maintain passenger loads. Here’s how it went.

For more TPG news delivered each morning to your inbox, sign up for our daily newsletter

Why I had to fly

As much as I missed flying, for the first time ever I did not want to fly, but rather had to.

I am a senior in college. In the first week of March, before COVID-19 became widespread in the U.S. and the World Health Organization classified the outbreak a pandemic, I flew home to Los Angeles for my last-ever spring break. The situation quickly escalated, so when my school announced that it would be switching to online learning, it became clear that I wouldn't be taking my return flight to Boston. I had no trouble canceling my ticket, but I knew in the back of my head that I still needed to eventually fly back to move out of my apartment.

Sure enough, nonstop flight options were drying up, as was the time on my lease, so after waiting two months, I pulled the trigger and booked a seat on one of American Airlines' last nonstop flights between the cities before they would be temporarily suspended. After this cut, this popular route that once offered over a dozen nonstop options would only have a single nonstop flight, operated by JetBlue and likely more crowded. Unfortunately, flying private wasn't in my budget.

Related: Airlines that have suspended operations in light of coronavirus

LAX is notorious for its gridlock traffic, but that wasn't an issue this Thursday evening, at rush hour. While there were some cars, there were no horns honking and no sounds of airplanes taking off or landing.

Most airlines, including American, have temporarily suspended curbside check-in.

Every terminal entrance had a stop sign advising people not to enter if experiencing any symptoms of respiratory illness and to practice social distancing.

With the Tom Bradley International Terminal usually busiest at night, I decided to stop by there before continuing on to Terminal 4, where my flight was departing from. While there were still a few flights departing from the terminal, it was an eerie, empty scene. It smelled clean and looked spotless.

The security area that usually has a long snaking line was completely empty. Passengers were vastly outnumbered by airline and airport personnel.

Terminal 4 was equally quiet. While a priority line was still available, the usual Priority and private Flagship First Check-In areas were closed. Check-in was consolidated to a few kiosks and counters.

There were signs advising travelers to maintain distance from one another and all check-in agents were wearing masks, even though the airline technically only required flight attendants to wear them. I was pleasantly surprised to see plexiglass shields at many of the counters as the airline hadn't mentioned them before. But what was even more surprising, and slightly concerning, was that I only needed to provide my last name and destination to get my boarding pass and check my bag. I had my ID ready in my hand, but the agent didn't need me to show it.

The security area was consolidated to one checkpoint. I was asked for my ID here and needed to briefly lower my mask in order for the officer to verify my identity. Like the check-in counter, there was a plexiglass shield at the screening podium. Although there wasn't a separate line, TSA PreCheck benefits were still available. Clear expedited was not available (or needed).

Once through security, I was greeted by rows of empty seats. I used to be a regular here, and I had never seen the place like this before. It looked like a scene out of a movie.

Some seating areas were closed off entirely.

For the most part, everyone sat near their gate and appeared to maintain fair distance from one another. There were no hand sanitizer dispensers in the terminal.

While the airport was open, very few stores and restaurants were actually operating. Hudson News was, but some other big chains like Dunkin' Donuts were not.

American's Admirals Club and Flagship Lounge were closed, but the customer service desks were still staffed to assist with services like rebooking. Most other lounges in the airport were closed entirely.

The departure board looked awfully bleak for a major hub of one the world's largest airlines.

Several gate counters had the same plexiglass shields that were at the check-in and security areas. Otherwise, the boarding process was as usual. Some airlines, such as Delta, recently changed boarding processes, moving to back-to-front systems. There were no health questions asked.

I took all possible precautions before boarding my flight. This included picking a flight that looked emptier than others, selecting a window seat away from high-traffic areas and packing multiple face masks, disposable gloves and disinfectant wipes.

Related: How to protect yourself (and others) on a crowded plane

For better or worse, the aircraft didn't smell like cleaning products the way the terminal did, but it sure looked spotless. The Airbus A321 operating this flight spent over 24 hours on the ground at LAX before our flight so it went through a deep cleaning, which includes wiping of hard surfaces and fogging procedures. The airline is in the process of expanding these enhanced cleaning procedures and said that it will roll out to all mainline and regional flights in the next few weeks. Still, I disinfected high-touch areas such the seatbelt, tray table and armrest again when I boarded the flight.

Note that this was not the A321T version, featuring first and business class with lie-flat seats, that AA usually employs on transcon routes. The entire A321T fleet has been grounded as a result of falling demand, and this flight was operated by an A321 in standard configuration, with economy class plus first featuring recliner seats. The A321T will return to the JFK-LAX route on May 7, only on one flight per day.

The first class cabin looked about 50% occupied, while the main cabin was about 30%. My entire row, including the seats across the aisle, remained unoccupied throughout the flight.

While not everyone was originally assigned a row to themselves, passengers were allowed to switch seats within the cabin so many did end up with one. No middle seats or seats adjacent to flight attendant jump seats were occupied.

All flight attendants wore face masks, as is now required. Most passengers wore masks as well; beginning May 11, all passengers will be required to do so. Although passengers should bring their own, the airline will begin distributing sanitizing wipes and masks to travelers within the next few weeks.

Related: How US airlines are handling distancing, masks and more

As is the case with most airlines, to minimize interactions and risk, American has made some drastic in-flight service cuts. On all flights shorter than 2,200 miles (which is typically less than 4.5 hours), beverages are available on request only and limited to water, canned beverages or juice, as well as alcohol in first class. No snacks or meals are available in economy or first class. However, my flight clocked in at 2,611 miles so the procedure was a bit different.

The flight attendants came down the aisle to offer beverage service as usual. There were no snacks, food for purchase or alcohol available in the main cabin. First-class passengers would have been served a full meal, albeit on one tray instead of in courses, had this not been a red-eye flight.

Although I wanted to avoid eating or drinking on my flight, I asked the flight attendant if I could have an entire bottle of water instead of a cup and he obliged without hesitation. There were still magazines in the seatback pockets; other airlines like Delta and United have pulled them out.

While still quiet, upon deplaning in Boston, I was greeted by a slightly busier terminal than in Los Angeles. Still, nearly all airport concessions were closed.

There were no temperature checks, but there were numerous signs at all exists advising travelers entering the state to self-quarantine for 14 days. It was also quite difficult to get an Uber from the airport as the app showed no cars available for a while.

Flying during the pandemic was unlike anything I'd ever experienced. While I still don't recommend traveling unless absolutely necessary, seeing the numerous safety measures recently implemented firsthand was reassuring and gives me hope for the future of air travel.