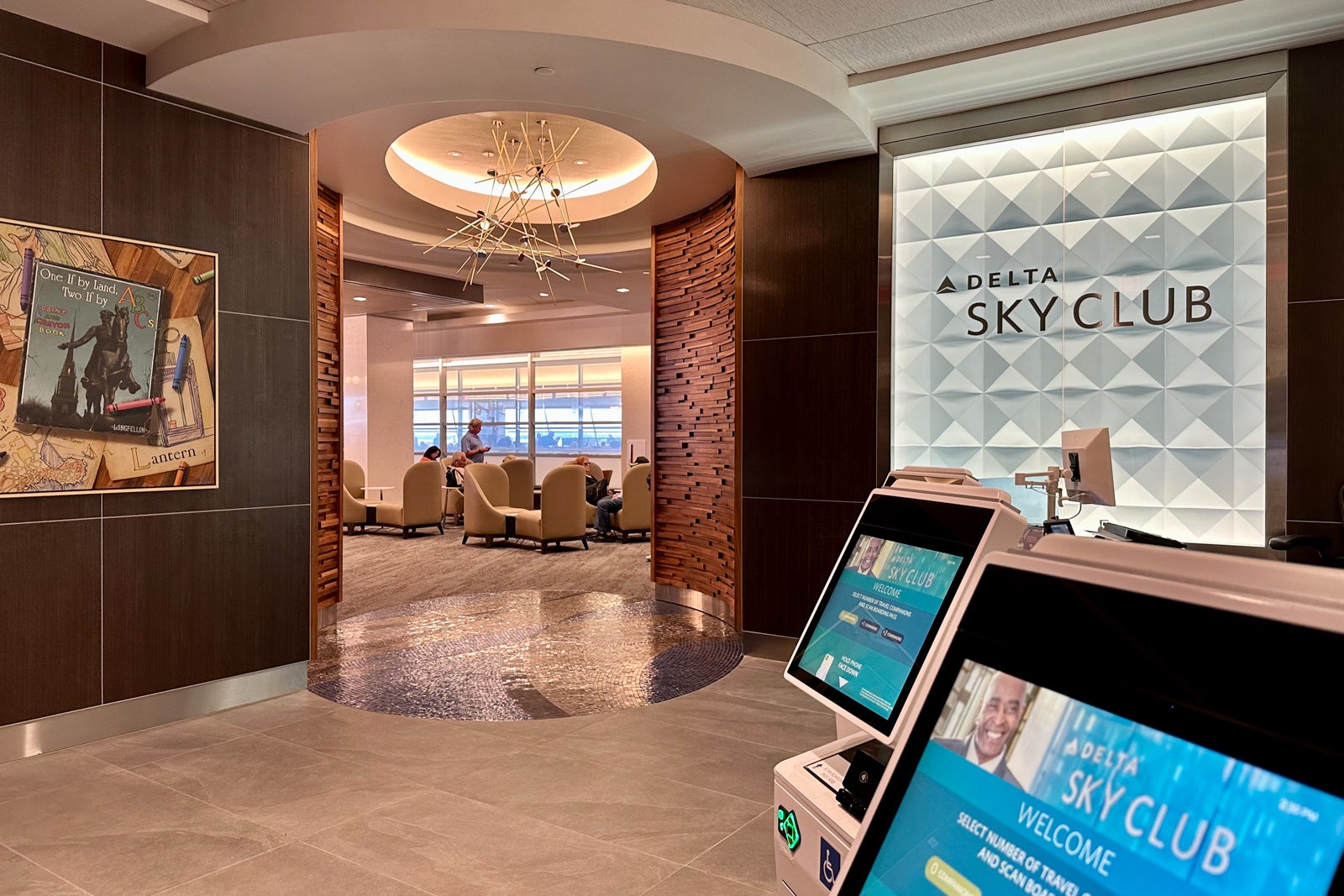 Delta Air Lines’ Boston hub is getting another round of upgrades.

This time, the carrier is making improvements to the terminal and lounge experience as the hub continues growing with more flights.

Delta just opened its first-ever Sky Club Express in Boston, which is designed to alleviate some of the lounge overcrowding in the international terminal, as well as an expansion to its existing Sky Club in Terminal A located near Gate A18.

Additionally, the carrier recently launched a new bus service between the domestic and international terminals, making for a more seamless connecting experience for long-haul travelers.

Delta turned the Boston Logan International Airport (BOS) into a hub back in June 2019, and has remained in growth mode since.

Now, as the carrier gears up for a busy winter travel season, it’s bringing its A-game to Boston, where it goes head-to-head with JetBlue Airways, among other carriers, to fight for the local market.

Boston is officially home to the world’s first Sky Club Express, a new style of lounge for the carrier.

Located on the lower level of Terminal E, this miniature club was designed as a temporary solution to address some of the lounge overcrowding in the airport’s international terminal. It's open daily from 1 p.m. until 10:30 p.m.

While that solution may have worked in the past, the airline continues to grow its international network from Boston, which has led to overcrowding at these partner lounges.

Delta’s long-term solution is to build a brand-new signature Sky Club in Terminal E, but that 20,000-square-foot space won’t open until summer 2023.

So, in the meantime, Delta decided to build a temporary Sky Club Express to give its long-haul flyers a better option.

This space is located just one floor below the departures level and is accessible by elevator.

The space itself occupies the former outpost of The Club at Boston, which closed during the pandemic and never reopened.

Delta decided to lease the space in April and open the lounge at the end of July, as it worked to quickly meet the increased demand for international travel, Duane Clark, Delta’s regional operation manager for Sky Clubs, told TPG during the tour.

While the layout is certainly not up to Sky Club standards, it works as a temporary solution. There’s seating for just around 100 passengers, which is split across three large rooms.

Even though this is an “Express” club, you’ll quickly recognize that the chairs, couches and recliners are in Delta’s signature style.

You’ll even notice some Boston-themed artwork lining the walls.

Fast, password-protected Wi-Fi, power outlets and USB-A ports are located throughout the space.

Unfortunately, there are no windows in the club, but again, this is a temporary solution that’ll disappear entirely when the new lounge opens next year.

There are two single-use restrooms, and both are outfitted with showers. However, Delta opted to disable the showers since it didn’t want long queues to form for the restrooms, Clark told TPG.

True to its “Express” name, the food and beverage service is scaled back in this club (though it’s still roughly on par, if not better, than what you’d find in many American Admirals Clubs or United Clubs).

The airline is “hoping to expand the kitchen a bit more to do more food here,” Clark told TPG.

The lounge recently received its liquor license, so you can now enjoy beer (Sam Adams, of course), wine and canned cocktails as well.

All in all, Delta’s new Sky Club Express is far from the carrier’s nicest outpost, but it fits the bill as a temporary space.

Something is better than nothing, and Delta deserves credit for filling the vacancy left by The Club with a temporary club, even while working on building a signature new lounge for Boston.

When I flew on Delta’s inaugural flight from Boston to Tel Aviv at the end of May, I briefly popped into the A18 Sky Club before making my way to the international terminal (the Sky Club Express wasn’t open then).

At the time, only a portion of the A18 lounge was open, as the carrier was working to expand the space and brings its signature new design to Boston.

Now, the expansion is fully complete, and it looks great.

With a capacity of 400 guests, the Sky Club seats nearly twice as many passengers as it did before.

As you enter the lounge, you’ll find three new self-check-in kiosks in the redesigned lobby area.

The new wing of the lounge is connected seamlessly to the entrance area by a wide hallway lined with locally inspired artwork, a conference table and some individual couch-style workstations.

This is also where you’ll find the lounge’s permanent buffet and walk-up bar, which are designed in the latest Sky Club motifs.

During my visit, Delta was promoting its partnership with Boston-based Chef David Bazirgan, and several of his dishes looked quite tasty, including the tomato-cucumber salad and roast beef sandwiches.

I even got to see the “surprise-and-delight” snack service — an affogato with a shot of Kahlua — making its way around the club. While it looked delicious, I’m still salty about the missing soft pretzel bites, which were recently removed from the lounge’s menu.

The expansion adds two more drink stations, each outfitted with an espresso machine and water dispensers.

You’ll also find a second set of restrooms, as well as two additional shower suites, bringing the total to four showers in the lounge.

There are tall floor-to-ceiling windows lining the perimeter of the lounge, which offer fantastic views of the ramp and airfield in the distance.

If you’re a VIP, celebrity or dignitary, you might soon be welcomed into the lounge’s private and hidden conference room, which is still in the process of getting furnished.

There are two concourses in the A terminal, which are connected airside by a short underground tunnel. Most domestic flights, as well as a handful of international flights, depart from these gates.

Then, there’s Terminal E, which is home to the airline’s long-haul flights.

In the past, getting between Terminal A and E has required exiting security and walking under a covered bridge before finally arriving in Terminal E, where you’d need to re-clear security — a big trek, especially if you have a short connection.

But now, the connecting experience is changing for the better with the introduction of a new bus service between Terminal A and E.

If you’re connecting in Boston to a long-haul flight, you can now make your way to Gate A11, where you’ll find an airside shuttle waiting to transport you to the E gates.

The ride itself takes about five minutes and offers fantastic views that are sure to make an aviation enthusiast giddy.

The bus service is operated by PrimeFlight and runs every day between 12:15 p.m. and 10 p.m. Just be sure to check your gate assignment before taking the shuttle to the E gates, as some long-haul flights do depart from Terminal A.

If you’re landing in Boston from an international flight, odds are that you’ll deplane in Terminal E. If you have an onward connection, you’ll need to collect your checked bags, clear immigration and pass through customs before re-checking your bags and making your way to Terminal A.

Though it’s not advertised, you can clear security in Terminal E and then take the bus from Terminal E to A, which should make for a more seamless connection between terminals.

Delta is growing in Boston in a big way with the expansion of its Sky Club network.

While the new Sky Club Express concept is only temporary, it offers a comfortable place to relax before your long-haul flight.

Of course, it’ll be even better when the new signature Sky Club opens, but this new pop-up location should help alleviate some of the lounge overcrowding we’ve seen in the international terminal.

Domestic flyers are also in for an upgrade with the now-complete Sky Club near Gate A18. This space offers great views, plenty of seating and an upgraded food and beverage experience.

Those with connections will now enjoy a more seamless experience getting to the international gates thanks to the new bus service, which will be especially appreciated by travelers who’ve needed to move between terminals during the winter.

Altogether, Delta's latest round of upgrades show that the carrier is committed to its Boston hub for many years to come.