At Boston, Delta pushes to become No. 1 airline, surpassing JetBlue in departures

Articles
Ted Reed has covered airlines since 1989. He was a reporter for six newspapers including The Miami Herald and The Fresno Bee, and he was a staff writer for pre-merger US Airways. He is co-author of the book "American Airlines, US Airways and the Creation of the World's Largest Airline."
Oct. 08, 2021
•
8 min read 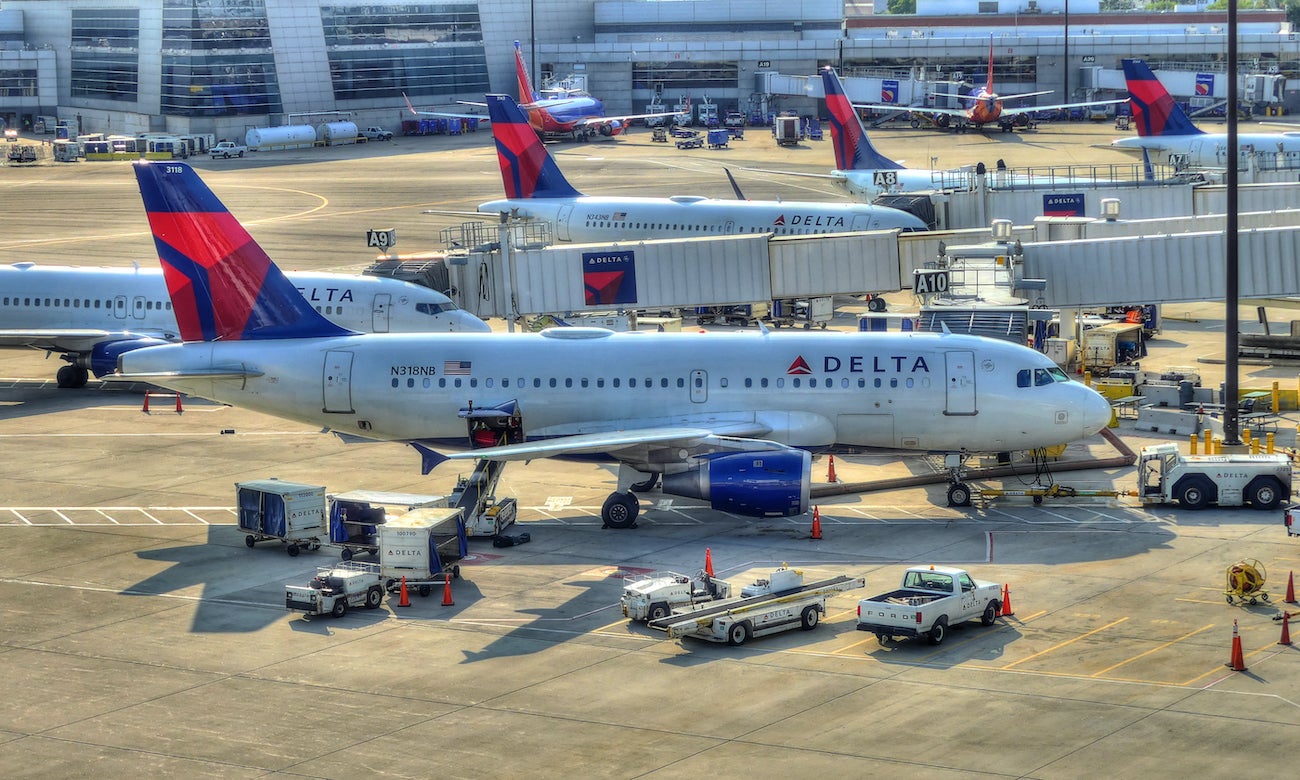 At Boston, Delta pushes to become No. 1 airline, surpassing JetBlue in departures
This post contains references to products from one or more of our advertisers. We may receive compensation when you click on links to those products. Terms apply to the offers listed on this page. For an explanation of our Advertising Policy, visit this page.

It's all eyes on Boston this week for three of the biggest U.S. airlines.

Delta helped put the spotlight on the city this week, kicking off a global airline industry conference there earlier this week by announcing plans to expand its Boston Logan hub with two new transatlantic flights, three new domestic routes and new Airbus A321 neo aircraft.

What Delta didn’t say is that in October, it will become the largest airline at Logan in terms of departures — with 3,140 for the month, compared to 3,074 for JetBlue and 2,016 for American, according to Cirium. That's a switch from September, when JetBlue had 2,888 scheduled departures, Delta had 2,797 and American 1,774, according to Cirium.

Based on current schedules, October will be the month that Delta's departure count passes JetBlue, long the airport leader. For now, JetBlue remains ahead in the number of seats, but that advantage could erode too as Delta adds transatlantic flights on high-capacity wide-body jets. Delta now serves Amsterdam, Rome and — starting later this month —London Heathrow. Next up are plans to add Paris early in 2022 and then Athens and Tel Aviv in the summer as well as the resumption of seasonal routes to Dublin, Edinburgh and Lisbon.

Moreover, on Sunday, Delta will add two new destinations – Charlotte and Dallas/Fort Worth, the two largest hubs of rival American. Delta's Delta Connection affiliates will fly those routes with regional jets, so the seat count won’t be high — but the challenge to American is obvious.

But that status quo is being challenged as Boston emerges as an increasingly competitive aviation market.

By summer 2022, Delta will operate up to 160 daily departures from Logan to 55 destinations, representing 20% more capacity than it operated at its highest pre-pandemic level in October 2019, Delta said. JetBlue, the current leader, said it plans 154 summer departures, while American has not released its summer schedule.

JetBlue spokesman Philip Stewart said the carrier will maintain its seat advantage into the summer. August schedules show JetBlue with 631,027 seats and Delta with 615,2307 seats.

“We will offer more seats (as) a result of all mainline aircraft,” he said. Many Delta domestic flights are on regional aircraft operated by Delta Connection affiliates.

What Delta is doing in Boston is the same thing it did in Seattle, where – starting in 2014 -- it built a domestic hub largely on the strength of international service that was superior to what incumbent carrier Alaska could provide.

Now Delta sees a path to becoming the number one carrier at Logan as it continues to grow, particularly in international flights.

“We always did very well domestically in Boston, but internationally it’s mostly foreign flags flying into Boston,” Joe Esposito, Delta senior vice president for network planning, told The Points Guy. “It hasn’t had a U.S. anchor carrier for transatlantic, so I think there’s a great opportunity for us.”

He said that Delta will eventually serve eight of the top 10 transatlantic destinations from Boston – “That’s a pretty good portfolio to go to market with” — and that 25% of the international passengers will make domestic connections.

Aiding Delta in Boston is joint-venture partners Air France-KLM, which strengthens its transatlantic position at Logan. KLM operates three weekly departures to Amsterdam, where it offers connections throughout Europe.

KLM CEO Pieter Elbers told The Points Guy that 15% to 20% of KLM's Boston passengers connect via Delta. KLM serves nine U.S. cities including Atlanta and New York. “We do best to Delta strongholds,” he said during an interview at the IATA conference in Boston. Boston is a strong market, he added with leisure travelers as well as business travel involved in universities and corporations including pharmaceutical companies. Esposito of Delta said Boston provides “a high level of business traffic (that is) well diversified with education, high tech, pharmaceuticals and other corporations. In 2019 Delta moved to Terminal A, adding a half dozen additional gates.

KLM’s strategy during the pandemic was to cut back on frequencies but to continue to provide connections, Elbers said. For instance, for much of 2020, “Amsterdam was the only way to connect Bilbao with Billund, Denmark,” he said. During the week of September 23-29, Amsterdam was the busiest airport in Europe by flight count, with 1,049 total flights (arrivals and departures), ahead of No. 2 Istanbul with 980 flights and No. 3 Frankfurt with 926 flights, according to Eurocontrol.

Back in the U.S., Esposito said Delta sees Northeast and Boston Logan travel recovering from the pandemic. As the region’s recovery began, he said, “We started out with leisure, flying heavily to Florida and to our hubs.

“Then we started adding where we saw customers were booking,” which meant flights to bigger cities including Chicago, Los Angeles, Salt Lake City and Chicago, and then to mid-sized cities as business travel has grown. Besides Athens and Tel Aviv, Delta's summer 2022 schedule additions from Boston include Baltimore, Denver and San Diego on July 11. Baltimore will have five daily Embraer regional jet flights, while Denver and San Diego get Boeing 737s.

The three new cities mean that Delta will operate in all of the top 20 domestic markets at Logan. Of course, its centerpiece is Atlanta, which has 12 daily departures from Logan. Many Northeast passengers make connections in the two Southeast hubs.

More on Delta: Sayonara, Narita: The Rise and Fall of Delta’s Tokyo Hub

Arguably, Delta’s strength at Logan may help American and JetBlue make a case as they contest the Justice Department’s opposition to the codeshare agreement they plan at both Boston Logan and the airports serving New York City.

American spokesman Andrew Trull said American’s winter schedule at Boston will exceed pre-pandemic capacity levels by 9%, with 106 peak departures to 29 destinations including eight international destinations, mostly in the Caribbean. The only transatlantic destination, however, is London.

On Nov. 2, American will begin Boston-Los Angeles service with an Airbus 321T aircraft, the swankiest in its fleet with just 102 seats. In 2022, every transcon flight from Boston operated by the Northeast Alliance — the name American and JetBlue have given to their partnership — to Los Angeles, San Francisco, San Diego and Seattle will be on either the American A321T or JetBlue aircraft equipped with that carrier's lie-flat Mint business class seats.

The stepped up competition comes as Delta advances previously announced plans to create a hub in Boston. It was in June 2019 that Delta disclosed that it would build a hub at Logan, where JetBlue has been the largest carrier for about a decade.

Out West: Alaska Airlines defends its home turf in newest spat with Delta

It is unclear when JetBlue declared Logan a hub, but by the winter of 2014 it was operating 118 daily departures, many to Florida and more than any other airline.

For the full-year 2021, however, Logan airport stats show that Delta still has a ways to go to catch up with JetBlue. JetBlue carried 33% of the airport’s passengers, compared with 21% for American and 19% for Delta, the airport said. In terms of flights, JetBlue operates 35%, while Delta operates 18% and American with 17%, the airport said.

Going forward, though, the top spot in Boston may be up for grabs.

Featured image by (Photo by QualityHD/Shutterstock)
Editorial disclaimer: Opinions expressed here are the author’s alone, not those of any bank, credit card issuer, airline or hotel chain, and have not been reviewed, approved or otherwise endorsed by any of these entities.