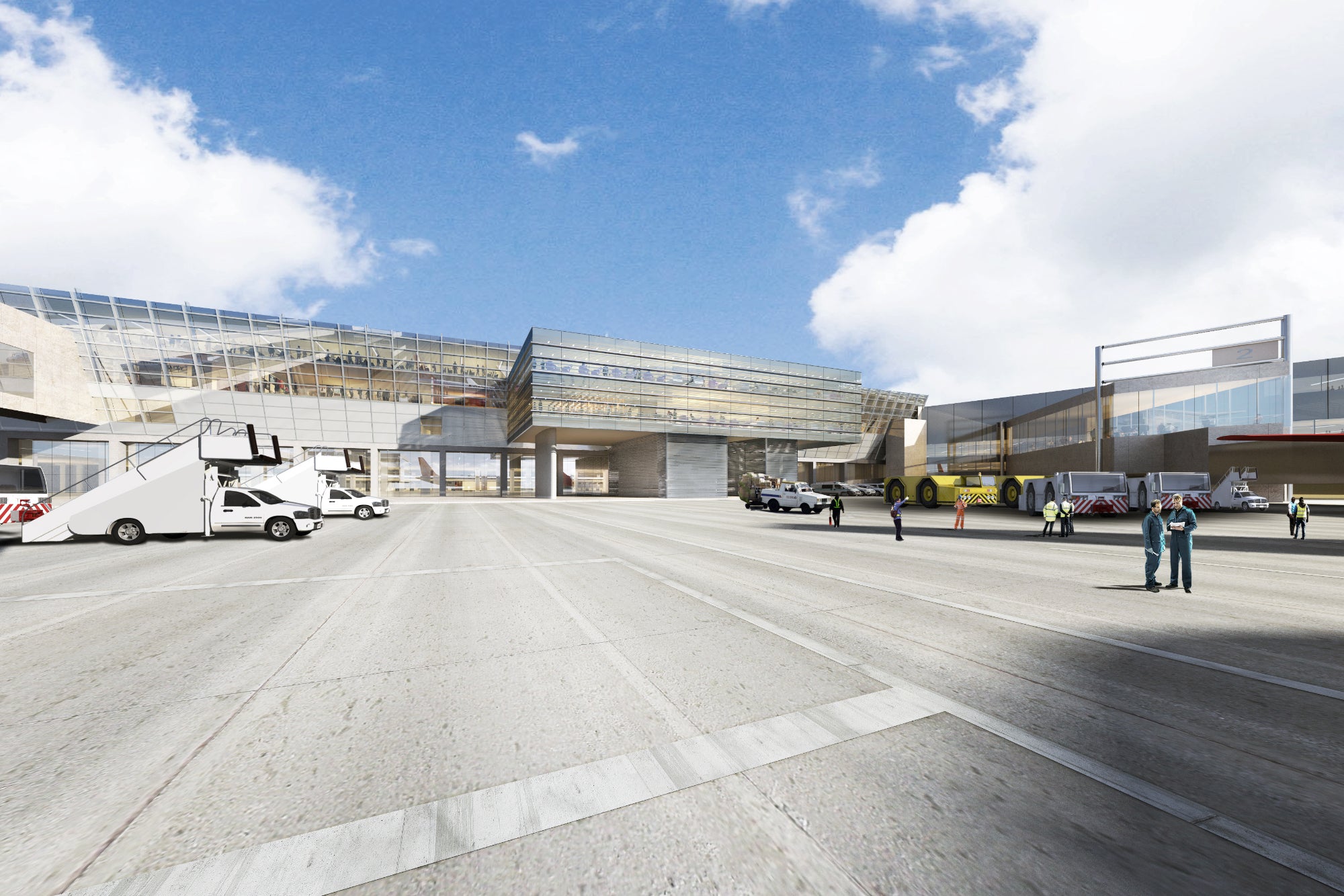 American Express Starts Building New York JFK’s Centurion Lounge
This post contains references to products from one or more of our advertisers. We may receive compensation when you click on links to those products. Terms apply to the offers listed on this page. For an explanation of our Advertising Policy, visit this page.

Wednesday marked a big moment for both American Express and New York’s JFK airport when the company broke ground on what will become the largest American Express Centurion Lounge in the country.

The space will be located in JFK's Terminal 4, which is home to Delta and international carriers like Asiana, Emirates, Etihad, KLM and Virgin Atlantic. When originally announced, Amex said the lounge would open in early 2019, however, it's now looking like the space will open around this time next year.

With eight Centurion lounges in the US and one in Hong Kong, Amex is working at a swift pace to open up more of the spaces for its members. Aside from JFK, it has plans to open Centurion Lounges at airports in Charlotte (CLT), Denver (DEN) and Los Angeles (LAX) over the next two years.

Measuring 15,000 square feet, the JFK project will be the largest lounge in Amex's network and the second in New York City after the New York LaGuardia (LGA) location. To put it in context, it's 2,500 square feet bigger than the Dallas Centurion Lounge, currently the largest Amex lounge in the US.

Having a groundbreaking ceremony for a lounge is a little unordinary since lounges are located inside airports, where the ground has long been broken. However, JFK's Centurion lounge actually did have to break ground since the space is expanding Terminal 4 itself.

It will exist partly in what already exists of Terminal 4, but will also extend from the terminal by what appears to be about 60 feet. The lounge will feature two floors, large windows and sit about 20 feet above the tarmac.

Floor plans show the potential layout and include areas for showers and a hot food bar.

For those who don't want to make the somewhat arduous trek to the Delta SkyClub, the Centurion lounge will be a much more accessible option since its located immediately post-security, right next to the Etihad Lounge. Once the JFK location opens, Amex Platinum cardholders will have access to the three lounges in the terminal, Delta's Flagship SkyClub (only when flying Delta), the Centurion Lounge and the Wingtips Lounge (through Priority Pass).

JFK's Terminal 4 is one of the busiest terminals in the country, and its lounges can get quite crowded. Hopefully the Centurion Lounge will more evenly distribute travelers throughout the terminal and help ease the issue of overcrowding.

American Express, JFK Airport and Port Authority leaders all stressed how Terminal 4 was a "premium" terminal at the groundbreaking event on Wednesday, and that's why it made sense to place a "premium" lounge there. Amex's relationship with Delta didn't hurt its case either.

"I think this is really the right place, at T4, at JFK... the center of the world when it comes to international facilities and gateway to the United States," said Huntley Lawrence, Director of Aviation for the New York Port Authority. "This is the right place for this product."

While details of what will be inside of the lounge are still slim, we do know it's going to be a great place for AvGeeks — American Express told TPG that visitors can expect 270-degree views of the tarmac, making it a great place to plane spot.

Since Terminal 4 houses so many airlines, expect to see a variety of aircraft and liveries — I saw an Aeromexico 787, SWISS A330, El Al 747 and Emirates A380 among others during my time touring the grounds Wednesday. The control tower will take up the right side of the field of view, but you'll be able to see runways 13R-31L, 4L-22R and 4R-22L.

We were let onto the tarmac right up to the where the lounge will be located and got views from the ground level.

Although you won't be as close as we were to the aircraft, you'll definitely not be disappointed with the view from the coming lounge.

We spoke to Chris Cracchiolo — SVP, Global Loyalty and Benefits at American Express about the JFK lounge and other locations. Travelers should expect to see new features at the JFK Centurion that aren't at any other lounges.

The soon-to-be implemented rule that only allows visits to Centurion Lounges three hours before departing flights will apply at the JFK location, too, Cracchiolo said.

Cracchiolo wouldn't give any specifics on other lounges, but he did say the coming location at London Heathrow (LHR) is now moving along. However, the new locations that have been publicly announced will definitely not be the last we hear about new places for flyers to relax.

"We are always looking at other airports," said Cracchiolo about other potential lounges. "When we see an opportunity, we're going to go after it."

When American Express grows its cardmembers in a certain markets, it will start looking at adding lounges at relevant airports. It can also work in reverse, where product refreshes or opening a lounge can drive card sign-ups — which was the case with the Philadelphia Centurion Lounge, Cracchiolo said.

An American Express spokesperson told us to expect one lounge to open this year, and Cracchiolo added that "you can probably expect that we'll look to improve the experience in existing lounges" this year — similar to the recent renovations of the Dallas and Miami lounges.

With JFK's coming $13 billion overhaul, Cracchiolo and Terminal 4 CEO, Roel Huinink, both told TPG that the renovations will not affect the new lounge. Platinum cardholders departing from other terminals, but who still want to visit the Centurion Lounge, will be able to access the lounge as long as they have a same-day boarding pass. The airport's renovations include plans for better connections (possibly even airside), which could make visiting the new space even easier.

All images by Brendan Dorsey / The Points Guy.

Related stories
Real ID requirements for air travel in US delayed until 2025
Another major cruise line to sharply hike onboard fees
Save money with these travel-related offers on your credit cards this month
Use these shopping portal bonuses to earn extra miles this holiday season
Featured image by Exterior view of the planned JFK Centurion Lounge. Image courtesy of American Express.
Editorial disclaimer: Opinions expressed here are the author’s alone, not those of any bank, credit card issuer, airline or hotel chain, and have not been reviewed, approved or otherwise endorsed by any of these entities.