The Grown-Up's Guide to Spring Break 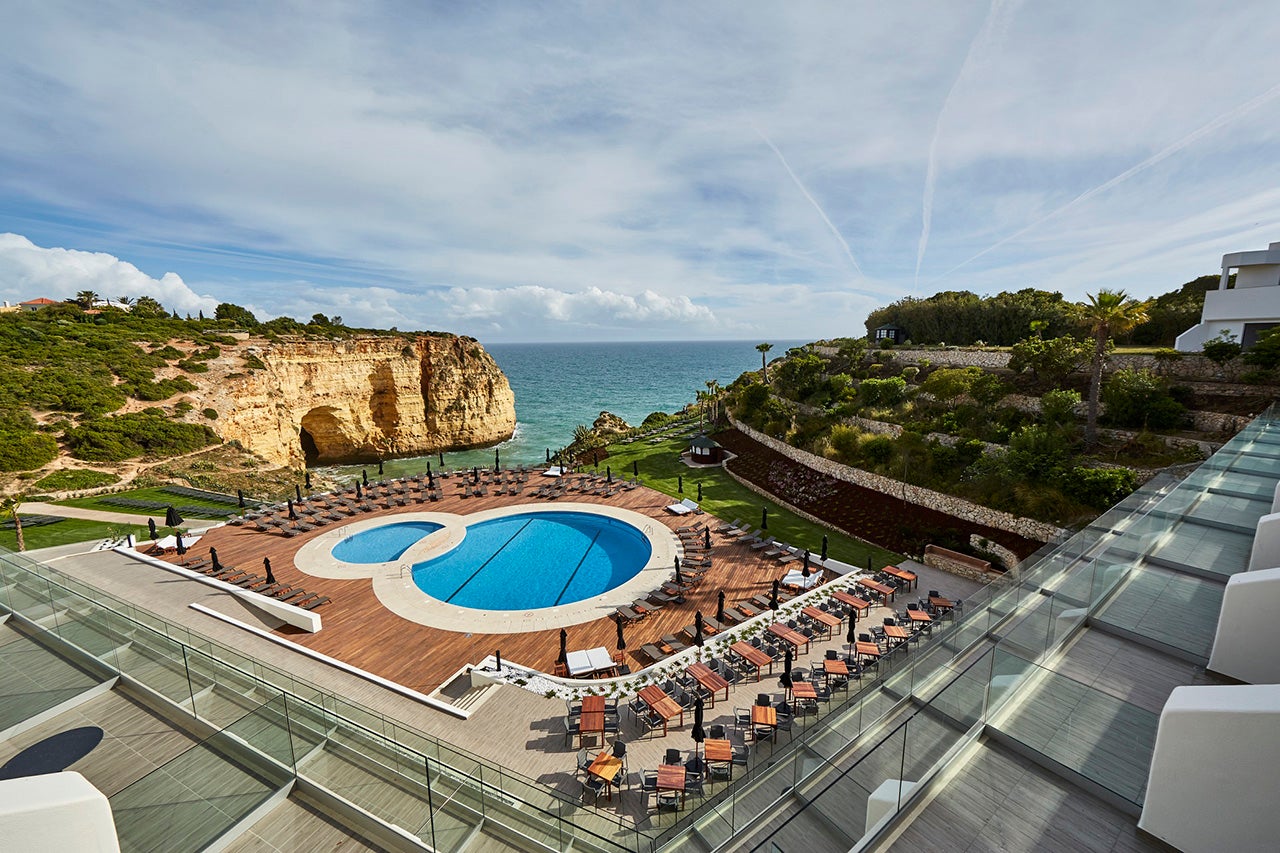 If memories of Spring Breaks past — all-night hedonistic romps fueled by cramped bunk beds and caramel-colored tequila shots — leave you shuddering, fret not. Beachfront tangles with intoxicated strangers may no longer be the end game of this annual travel ritual, but indulging in a transporting vacation before the summer crowds descend is always a good idea. This time around forego the hostels and debauchery and try one of these 14 posh upgrades instead. Their warm-weather locales and personalities are different, but each one is decidedly classy.

Where to find it: St. John's, Antigua

The gist: Fresh off the final phase of a massive renovation, the all-inclusive Blue Waters Resort & Spa — found amid 17 acres of tropical gardens in the northwest corner of Antigua — is a dream for those who covet a traditional yet upscale Caribbean experience. Even if the pricey villas or Cove suites are out of reach, superior hillside and deluxe beachfront rooms, with views onto greenery or the Caribbean Sea, await. Days will likely unfold at one of three almost-secluded private beaches or the adult-only pool, punctuated by piña coladas at al fresco bar Veronica’s and spa treatments like the lime and ginger salt glow.

Where to find it: Scottsdale, Arizona

The gist: Mountain Shadows first opened in Arizona’s Paradise Valley in 1959, and it fast became an oasis for stressed-out Hollywood cliques. A few years ago, this resort underneath Camelback and Mummy mountains was rebuilt from scratch, but its guestrooms still exude enticing mid-century modernism. Days will surely be spent splashing in one of two pools linked by a groovy waterfall feature or lazing on chaise lounges under the palms, a cold-pressed watermelon and pink Himalayan salt juice in hand. It’s a fitting, feel-good prelude to dinner at Hearth ’61, where dishes like wood-fired prawns and polenta are made with from-the-farm ingredients.

Where to find: Los Angeles, California

The gist: Shunning sand for sidewalks is sometimes the right Spring Break move, especially when the city slated for exploration is Los Angeles. No matter how vast the lineup of culinary and art excursions, the balmy film mecca promises a relaxing aura. One place that captures this laidback vibe particularly well is the petite Hotel Covell in Los Feliz, conjured by the travels of fictional namesake George Covell. Each one-of-a-kind suite, outfitted with Smeg refrigerators and details such as a claw-foot bathtub or mirrored headboard, feels like a pied-à-terre. There isn’t a bustling lobby to hang out in, but there is a sun deck and the wines-by-the-glass lair Bar Covell.

Where to find it: Bluffton, South Carolina

The gist: A peaceful Southern sojourn is sometimes all one needs for a reboot. That’s when Montage Palmetto Bluff, in South Carolina’s Lowcountry, beckons. Found between Hilton Head and Savannah, nestled along the May River, friends and families flock here for a healthy dose of the outdoors, exploring the nature preserve, boating, golfing and sipping bourbon on their balconies in the sunshine. When these activities tire them out, they doze off in the company of coastal-inspired furnishings and ceiling fans — lucky are those with their own cottages — or get slathered with therapeutic May River mud in the spa.

Where to find it: San Juan, Puerto Rico

The gist: In the wake of Hurricane Maria’s devastation, Puerto Rico, thankfully, is increasingly springing back to life. It’s the perfect time, then, to visit the island and help pump much-needed tourist dollars back into the struggling economy. Head to the capital San Juan and hop around from restaurant to bar to shop to museum in soothing, sultry climes. The Dreamcatcher in Ocean Park is a prime spot to balance this urban adventure with a bit of tranquility. A vegetarian B&B steps from the beach, each of its colorful rooms — seek out the Goddess suite for a private terrace and outdoor shower — features vintage furniture and of course snooze-friendly hammocks. Kick off the morning with a bountiful organic breakfast, sign up for a yoga or meditation class, and then curl up with a fresh-squeezed juice and the owner’s hand-drawn map of favorites to plot the rest of the day’s itinerary.

Where to find it: Lanai, Hawaii

The gist: Maui is indeed magical, but for a more unconventional Hawaiian getaway consider Lanai, the 90,000-acre island just a few minutes away. At the Four Seasons Resort Lanai, the oceanfront rooms and suites are so heady it’s hard to leave. Yet guests do manage to pull away for Nobu feasts, hula performances on the Hulopoe Terrace, and the Ocean Ritual, a seaweed scrub and Lomi Lomi massage combo at Hawanawana Spa. Outdoor fiends won’t want to miss snorkeling and off-roading on dirt roads beautifully colored red from volcanic rock.

The gist: Shiny resorts aren’t the only way to savor the Dominican Republic. Santo Domingo’s Colonial Zone is paradise for history buffs. This UNESCO World Heritage Site is the oldest permanent European settlement in the New World, and in the center of it all is Hodelpa Nicolás de Ovando, the one-time home of its namesake governor, dating from 1502. Wander through sites like the Museo de las Casas Reales, and retreat to guestrooms adorned with hacienda shutters and ochre tile floors, with pool breaks and rum nightcaps at Taberna 1502 in between.

Where to find it: San Antonio, Texas

The gist: Sprawling King Ranch, founded in the mid-19th century, is a proud emblem of South Texas. This equestrian haven is the inspiration for La Cantera Resort & Spa, part of the Destination Hotels portfolio, located atop one of the highest points in San Antonio. It wows with Texas Hill Country vistas, and calms with elements such as rustic wood beams and a fireplace in the lobby. Loma de Vida Spa, with its salt-infused pools, private garden cabanas and thoughtful treatments like the Absolute Texas, mingling beeswax, honey, and lavender, is undoubtedly the centerpiece. Make your way through the resort’s numerous restaurants, including the Tex-Mex Primero Cantina, but don’t let that stop you from partaking in a puffy taco crawl through the city.

Where to find it: Parish of St. George, St. Kitts

The gist: Take in the dreamy Narrows, the strait separating St. Kitts from Nevis, at the Park Hyatt St. Kitts, the luxury brand’s first foray into the Caribbean. Situated within the megayacht and resort development Christophe Harbour, the resort overlooks Banana Bay. In comparison to its more developed neighbors, St. Kitts remains relatively untouched, and that sense of serenity feels especially profound at the striking adult-only Rampart Pool. Those who abandon the water, though, will be rewarded with volcano hiking and catamaran cruising, followed by an innovative water-based Vasudhara therapy session at the Miraval Life in Balance Spa. Have a hearth-cooked dinner at the no-kids-allowed Stone Barn, housed in a building that once gave refuge to crops, and then retire to a guestroom flaunting cool Caribbean hues and a deep-soaking tub.

Where to find it: Porto Cervo, Italy

The gist: It doesn’t open for the season until mid-May, but Hotel Pitrizza, a Luxury Collection Hotel, is a hypnotic Italian destination for late spring travels. This rustic, elegant property on Costa Smeralda, in the northern part of Sardinia, elicits Mediterranean vibes in guestrooms through simple, airy design schemes that juxtapose dark wood and white walls. Leave the saltwater pool, dramatically carved into rock, to shop for locally made ceramics or peep at nearby archaeological ruins, and then cap off the evenings with fresh seafood dinners relished alongside views of Liscia di Vacca Bay.

Where to find it: Puebla, Mexico

The gist: Southeast of Mexico City, Puebla, with its brightly hued colonial architecture and addictive plates of mole poblano, is one of the country’s most enchanting cities. Rosewood Hotel Puebla, conveniently near the central Zócalo, captures that aura through a breezy courtyard, works by Mexican artists and plenty of Talavera tile. While the days away gawking at the 17th-century Puebla Cathedral and artifacts inside the Amparo Museum before returning to the hotel for an herb-centric spa treatment that honors remedies of yore — rosemary and cinnamon, for instance, is an ancient fix for weary legs — followed by a rooftop margarita.

Where to find it: Carvoeiro, Lagoa, Portugal

The gist: There isn’t a beach on the premises of southern Portugal's Tivoli Carvoeiro Algarve Resort — that's a short five-minute drive away — but there is a remarkable circular pool surrounded by limestone rocks and the Atlantic Ocean at this recently revamped property, part of the Tivoli Resorts & Hotels collection, on the Vale Covo cliffside. Scope out the charming whitewashed villages synonymous with the gorgeous Algarve coast, and succumb to the two-hour foot soak, scrub and massage that comprise the spa’s Algarve Experience. Frosty smoothies at the poolside Turquoise Bar easily morph into Porto Tonics up at the Sky Bar Carvoeiro.

Where to find it: Goa, India

The gist: Beachside yoga and trippy trance music instill Goa, in western India, with a certain intoxicating energy. This spirit is celebrated, albeit with the brand’s signature upbeat panache, at W Goa. Set underneath the historic Chapora Fort, at the edge of Vagator Beach, its rooms crackle with bright pink and showcase playful touches like Bodhi leaf-shaped mirrors. Scour markets for bold, chunky jewelry and detour to Goa’s capital, Panjim, to stroll past buildings from the Portuguese colonial era. Come dinner, W’s restaurant Spice Traders satiates guests with goat cheese-stuffed wontons and ma po tofu, getting them revved for fiery, made-to-order dosas at the Kitchen Table the next morning.

Where to find it: Clearwater, Florida

The gist: Frolicking on a Florida beach is a never-goes-out-of-style Spring Break pastime, and it’s all the more appealing when it happens far from the madness of Miami. With views of the Gulf of Mexico and the Intracoastal Waterway, Wyndham Grand Clearwater Beach exhibits Sunshine State comfort without pretense, whether it’s Painkillers and grouper nuggets at Docks Pool Bar & Grill, or a green tea detox wrap at the spa Pallavi. Field trips to the Salvador Dali Museum and Imagine Museum filled with glass art bolster a carefree schedule with cultural curiosities.

A reminder when booking hotels: Be sure to use a credit card that earns extra rewards for travel or hotel stays. Check out the TPG list of The Best Hotel Credit Cards for some of the top choices.

Related stories
Legislation that could gut credit card rewards set to move through Congress
Would you stay at 1 of these 8 haunted hotels this Halloween?
Southwest winter flash sale: Get one-way flights for as low as $29
You can currently buy points and miles with up to a 100% bonus — but should you?
Featured image by FILIPE FARINHA / STILLS