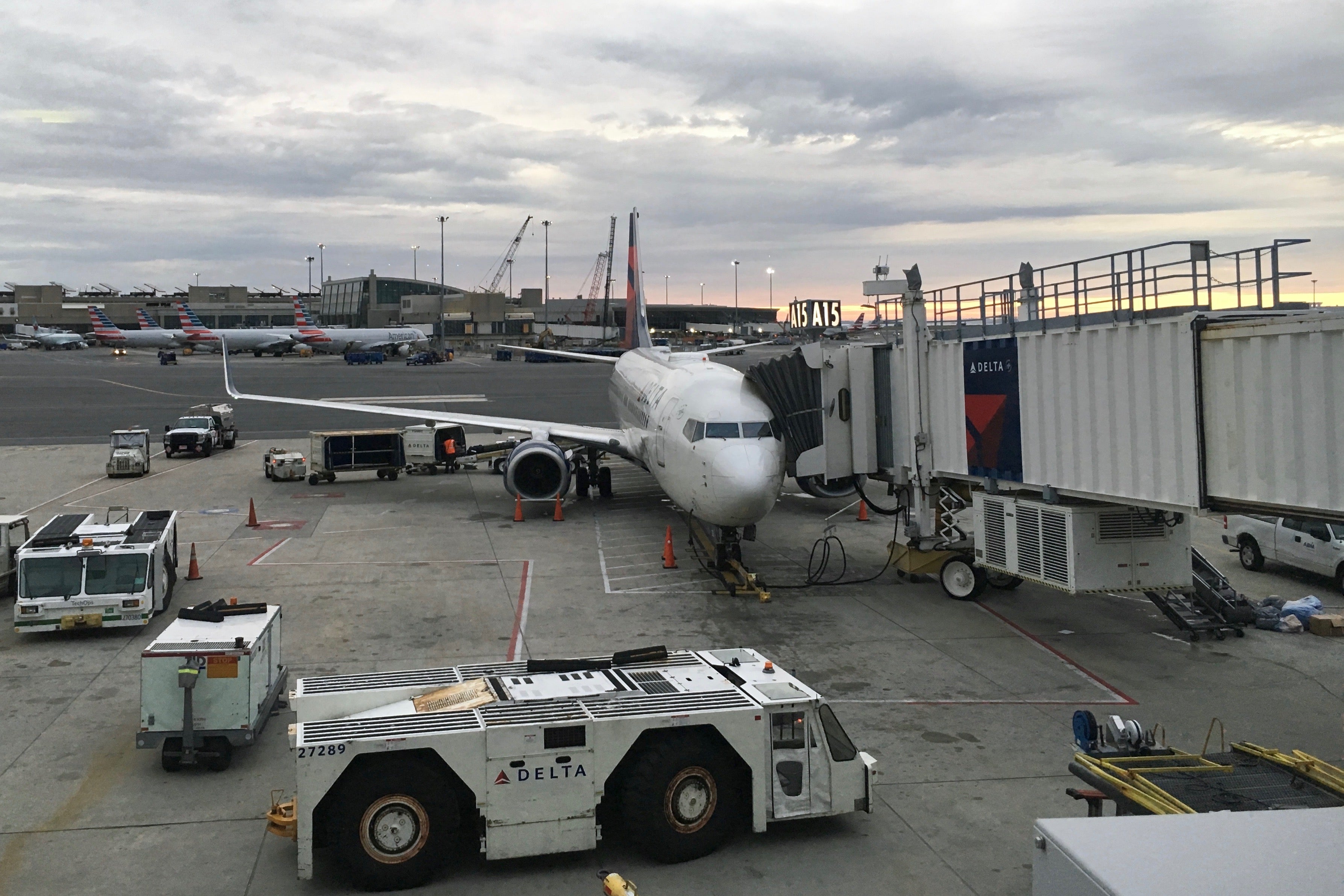 Now that all three major US legacy carriers have introduced their own versions of basic economy, I was curious to see how the new offerings compared. After testing out United’s version, the most restrictive of the three, I decided I would try my best to avoid experiencing it again. Today, we’ll take a look at how Delta’s version, the least restrictive of the three, sized up.

Domestic awards are still booking as standard Main Cabin fares and aren’t subject to basic economy restrictions yet. I used my Chase Sapphire Reserve Card to pay $148.20 for my one-way ticket from Boston (BOS) to Los Angeles (LAX). Since the card gives you 3x points on travel purchases, I was able to earn 444.60 Ultimate Rewards points. I also ended up with 625 Delta SkyMiles, and unlike on United, which does not award elite-qualifying credit for basic economy fares, I got 2,611 Medallion Qualifying miles (MQMs) and 125 Medallion Qualifying Dollars (MQDs.)

When I selected the basic economy fare, a pop-up window appeared, listing out all the restrictions that come along with basic economy and offering the option to switch to a standard Main Cabin seat for an additional $15.

There was another opportunity to “upgrade” to standard Main Cabin on the next page. While not as flashy as on United’s site, I still felt well aware that I was booking a basic economy fare.

Ironically, while my basic economy ticket didn’t allow me to choose my seat, I did have the option of requesting a special meal — as Boston to Los Angeles is among the transcontinental routes where all economy passengers are served a complimentary meal. With the promise of free food on a domestic flight, my basic economy experience was already off to a good start.

It was before the crack of dawn so the departures area was pretty empty and there was no line in the main check-in area. Unlike my experience with United, which does not allow basic economy passengers traveling only with carry-on baggage to check in online, I was able to skip the check-in kiosks and head straight to security with my carry-on since I'd checked in online ahead of time. Note that Delta is the only carrier to allow all passengers to bring a free carry-on bag plus a personal item when you've got a basic economy ticket.

While Delta’s website notes that seats will be assigned either at check-in or at the gate, I was pleasantly surprised to find that I was able to select one when I checked in online about 24 hours before my flight. I initially selected 30A, a window seat in one of the last rows of economy since that was one of the only window seats available. However, a couple of hours before my flight, I got a seat alert notification from ExpertFlyer that 20A, a window seat toward the front of the cabin, had opened up, so I switched to that. While the two seats are practically identical, I prefer being near the front so I’m not the last person to get off the plane.

As a basic economy passenger without Delta Medallion status, I was supposed to be among the last to board in Zone 3. However, similar to TPG Community Manager Wallace Cotton's recent Delta experience, before boarding began, the gate agents asked for volunteers to gate-check their carry-on bags in exchange for Zone 1 boarding — and I happily obliged. While gate-checking carry-ons is not a new practice, this was the first time I’ve seen incentives offered for doing so.

I’m glad I did this because our flight ended up being completely full and I would have probably been forced to gate-check my rolling bag anyway by the time my boarding zone was called. The gate agent told me this flight typically runs out of overhead space about two-thirds of the way into Zone 2 boarding. Had I been flying in basic economy on American or United, I would’ve had to pay the applicable checked bag fee plus a $25 gate handling charge for gate-checking my carry-on.

Our 737-800, a 2001 build registered N3753, featured a standard 3-3 layout in economy. While the plane was not configured with the Boeing Sky Interior, it was equipped with blue mood lighting — which was only turned on briefly during taxiing and not at all during the flight.

Each seat had 31 inches of pitch, and that shouldn’t change anytime soon now that Delta CEO Edward H. Bastian promised it will never go below that as long as he’s CEO. At the front of the cabin were six rows of Delta Comfort+ seats, which featured the same width of 17.2 inches but instead had 34 inches of pitch. Those sitting in Delta Comfort+ also received other perks such as better snacks and free alcohol.

I found my seat to be comfortable and had no issues on this 6.5-hour flight. Despite each seat having its own in-flight entertainment screen, there were no entertainment boxes beneath any of the seats. While I would’ve liked to have had an adjustable headrest, that's not an issue anymore with Delta’s newer 737s.

Each seat was equipped with seat-back IFE screens featuring the airline’s Delta Studio entertainment system. It was quite impressive, with free access to 300 movies, 750 TV shows, 18 channels of live satellite TV, more than 2,500 songs, podcasts, games and flight information. There was even a “Sky Kids” section with entertainment tailored for younger travelers. Despite being an older system, I had no issues regarding the responsiveness of the touch-operated screen. That said, I could have also streamed Delta Studio entertainment to my own device via the Gogo Entertainment App available on smartphones, tablets and laptops.

Complimentary Billboard earbuds were available for anyone who needed them.

Because we were on such a long transcontinental flight, I was initially disappointed to learn only First and Delta Comfort+ passengers had power outlets beneath their seats while economy passengers had access to USB plugs. However, once on-board, I was pleased to find that the information listed on Delta’s website was inaccurate and all passengers on this flight would have access to power outlets as well as USB plugs.

The power outlet definitely came in handy after I drained my laptop’s battery using Gogo’s high-speed 2Ku Wi-Fi, which was available onboard. The new satellite service worked pretty well and was definitely an improvement over its predecessor.

As with all other Delta Gogo-equipped planes, free messaging was available to all passengers as well as an hour of free Wi-Fi just for T-Mobile customers. Remember, you can save a few bucks by buying a Wi-Fi pass in advance.

There were two bathrooms accessible to economy passengers in the rear of the plane. While not the cleanest — this photo was taken soon after takeoff — I thought the vanity was nicer than usual.

Delta really shines when it comes to food and beverage for economy passengers — everyone is served a free meal on this route. Waiting at my seat was a printed menu listing out all the options. Since breakfast was being served on my flight, I had the choice of a fruit and cheese plate, turkey waffle sandwich and a protein pack, though I could have also pre-ordered a special meal.

The options differ slightly based on whether you’re flying eastbound or westbound. I could have still purchased food from the Flight Fuel menu had I still been hungry.

In addition to the free meal, complimentary snacks accompanied the second beverage service. I went with the Kind Oats & Honey Bar, but Snyder’s Pretzels, Biscoff Cookies and Squirrel Brand Almonds were also available.

After a disappointing basic economy experience with United, I was blown away by this one with Delta. Despite needing to wait until check-in, I still got to pick my seat, travel with the regular carry-on allowance and enjoy a free meal on-board. The crew were friendly and the captain did his best to keep us informed when we were delayed and later on, after a bout of turbulence. I’d probably still pick standard economy over basic economy for the ticket flexibility, advance seat reservation and option to upgrade if the price difference were under $25, but I wouldn’t hesitate flying it again.