Flight review: United's A320 in Economy Plus from New York to Denver 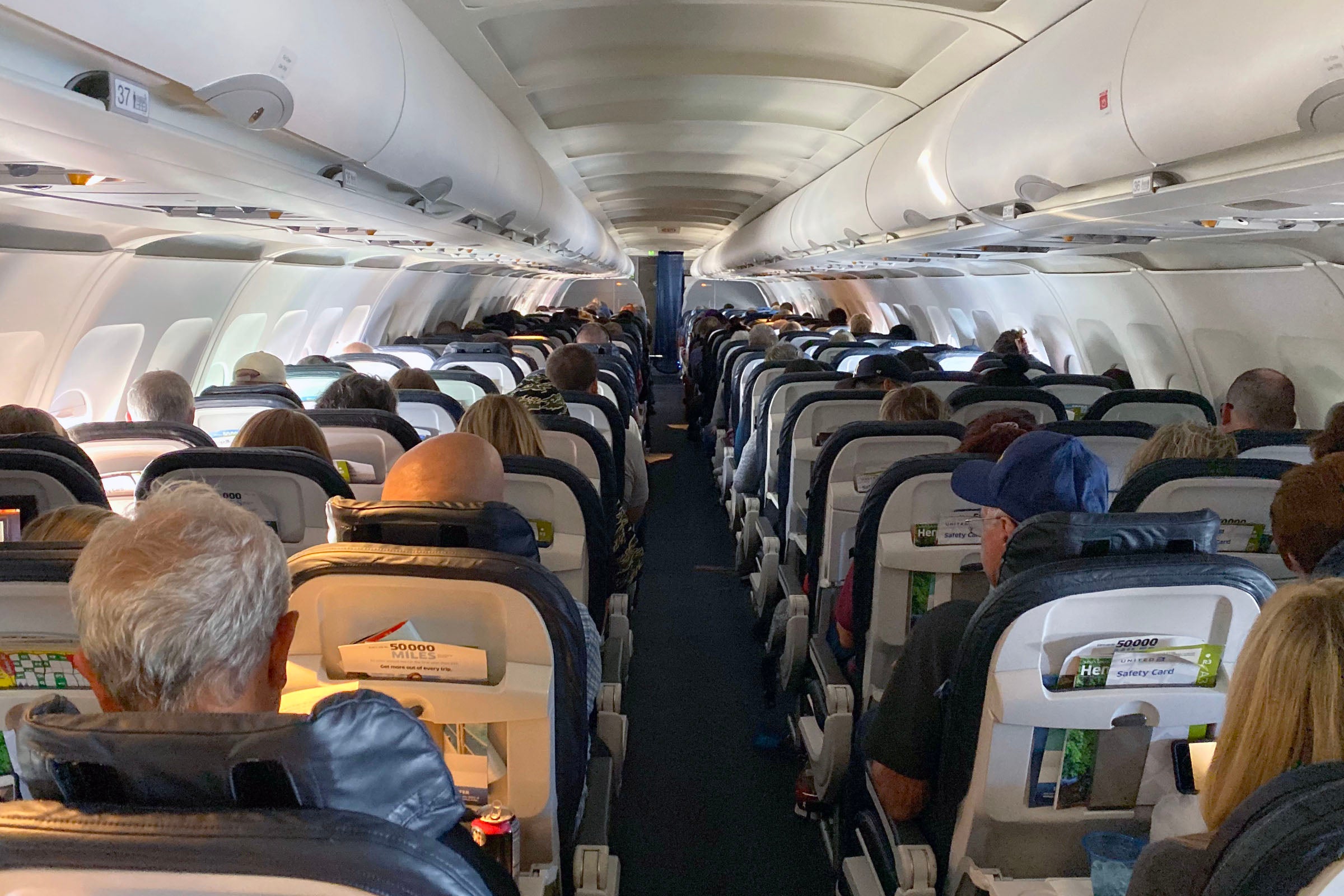 Flight review: United's A320 in Economy Plus from New York to Denver
This post contains references to products from one or more of our advertisers. We may receive compensation when you click on links to those products. Terms apply to the offers listed on this page. For an explanation of our Advertising Policy, visit this page.

Editor’s note: During the COVID-19 crisis, our team has temporarily ceased taking review trips. Instead, we have been publishing a selection of popular reviews from recent years — like this flight review from December 2019 — as well as resuming publishing of new, previously unpublished flight, hotel and lounge reviews, from trips taken before the lockdown. We hope this will help you choose once we’re all ready to start booking trips again.

This review covers a flight from 2019, and you can expect your experience to be different today.

Last fall, I needed to make my way from New York to Anchorage for a very special northern lights adventure in Alaska. Fares were fairly consistent across the board, and since I was working my way to requalifying for United Premier 1K elite status, I searched for an itinerary that would help get me closer to my goal of 100,000 Premier-Qualifying Miles.

I settled on a one-stop journey from New York LaGuardia (LGA) to Denver (DEN) and on to Anchorage (ANC), one of my most direct options, given that the carrier's nonstop flight from Newark (EWR) had already come to a close for the season.

There wasn't any saver award availability on the date I needed to travel, but if there had been, I could have booked the one-way journey for 17,500 MileagePlus miles, worth about $228, based on TPG's most recent valuations. Instead, I booked a cash fare for $309 with the airline, and paid with The Platinum Card® from American Express, earning 5x points for airfare* for a total of 1,545 points, worth about $31.

As a Premier 1K member, I was eligible for a complimentary space-available upgrade to first class. With just 12 seats in the Airbus A320 cabin, not a single passenger cleared, however, and I certainly didn't have a chance, being fourth down on the list.

I earned elite-qualifying credit and redeemable miles, as well. As a Premier 1K, I earned 11 miles per dollar spent on the base fare, for a total of 2,948 for the entire journey, worth about $38.

I arrived at LGA around 12:10 p.m., roughly two hours before departure, knowing that I'd be able to pass the time at the airport's latest and greatest concourse -- at least at the time --Terminal B. The construction at LaGuardia has made a ton of progress since then.

At check-in, the kiosk said my flight was overbooked and offered a chance to bid for compensation in exchange for taking a later flight. I selected the highest suggested bid ($800), and resigned myself to the likelihood that the one and only open seat on the plane — right next to me — wouldn't go out empty after all.

From there, I began making my way to the new gate area, past some of the terminal's yet-to-be-refreshed components, such as this dated food court.

As a Premier 1K member (and Star Alliance Gold elite), I was able to access the Air Canada Maple Leaf Lounge, but I won't be including impressions here, since access isn't included for all economy customers.

There were a few shops and restaurants open including Kingside, an American restaurant at the far end of the concourse.

There's also a Mexican restaurant called La Chula, which was especially busy during my lunchtime visit. Of course, today, you likely won't encounter crowds like these at the airport.

Best of all, Terminal B now offers a Shake Shack, but the line was far too long for me.

After touring the terminal, I headed over to wait at the gate. Everything was fresh, and the area was kept clean, but I much prefer the new gates at Newark Terminal C, which offer more spacious seating, iPads for ordering food and plenty of power outlets.

Soon enough, it was time to board N438UA, a 23-year-old Airbus A320. Since everyone made it on, that overbooked-flight bid didn't pan out.

As a United elite, I'm eligible to select Economy Plus seats free of charge. My pick, 21F, would have otherwise cost $109 here.

Personally, I prefer the second exit row on United's A320s. Seats in Row 21 offer significant legroom, and unlike those just in front, they also sport full recline.

There was decent under-seat storage — more than enough room for my large Tumi backpack.

There were universal power outlets as well, two for each set of three seats, meaning there's a decent chance you'll need to share. In fact, both of my seatmates plugged their devices in as soon as they sat down, so I ended up going without an outlet for the entire flight.

The foldout tray table was large and clean, with two slightly recessed spots for holding cups or beverage cans.

I don't love the Airbus windows, though. They're especially small on the A320, compared with just about any other aircraft type in United's fleet.

And since I was sitting in the over-wing exit row, my view was obstructed a bit by the engine and wing.

The passenger behind me also wasn't fantastic about respecting my personal space. She ended up kicking me throughout the flight.

The generous legroom made most of that worthwhile, though — there was so much space that I was able to get in and out of my window seat without asking the other passengers to move.

Row 21 is a huge improvement over the regular coach seats, which sport just 30 inches of pitch.

As I mentioned, United doesn't offer seatback entertainment on the A320, though the streaming entertainment worked well — just be sure to update the United app on your tablet or phone before departure!

There were 123 movies to choose from. I tested things out with a few minutes of the new-ish "Aladdin" film, which looked sharp enough on my iPad Pro, before spending the rest of the flight working.

Wi-Fi was fairly expensive given the short duration, although you could pause the packages, stretching that entry-level hour to the full flight. But I just paid $5 more for an unlimited plan.

This was actually some of the speediest Wi-Fi I've ever experienced on United, making it easy to be productive throughout the journey to Denver.

Though United typically offers free meals to all Economy Plus passengers traveling on select premium transcon flights, the same doesn't apply to the rest of the carrier's domestic network. Instead, flyers can order items from a buy-on-board menu, though Premier 1K and Global Services members are entitled to one item free of charge.

Now, due to the coronavirus, meal service has been altered, and you can expect a prepackaged snack bag in economy on flights longer than two hours and 20 minutes.

I had the cheeseburger. It was served on a brioche at the time but now comes on an everything bun for $10.

As a Premier 1K elite, my burger was free, as was a beverage of choice. I went for a fantastic On the Rocks Old Fashioned, which ordinarily retails for $12.

The burger was served hot. It was well-done and didn't have much cheese, but it was still quite flavorful, especially once I added some ketchup.

Later in the flight, I requested a Diet Coke, which was served with a standard plastic cup.

I wasn't expecting much from a domestic economy flight, but the crew turned out to be friendly and accommodating. They also offered a second full drink service, and I didn't go thirsty on this four-hour flight.

While I was initially bummed that my upgrade didn't clear, I didn't miss out on much during this flight. As a Premier 1K member, I was able to select a superb Economy Plus seat free of charge, and my cheeseburger and cocktail were on the house. The service was top-notch and the Wi-Fi worked well. As long as I can continue to score a seat in Row 21, missing out on a first-class upgrade shouldn't sting much.