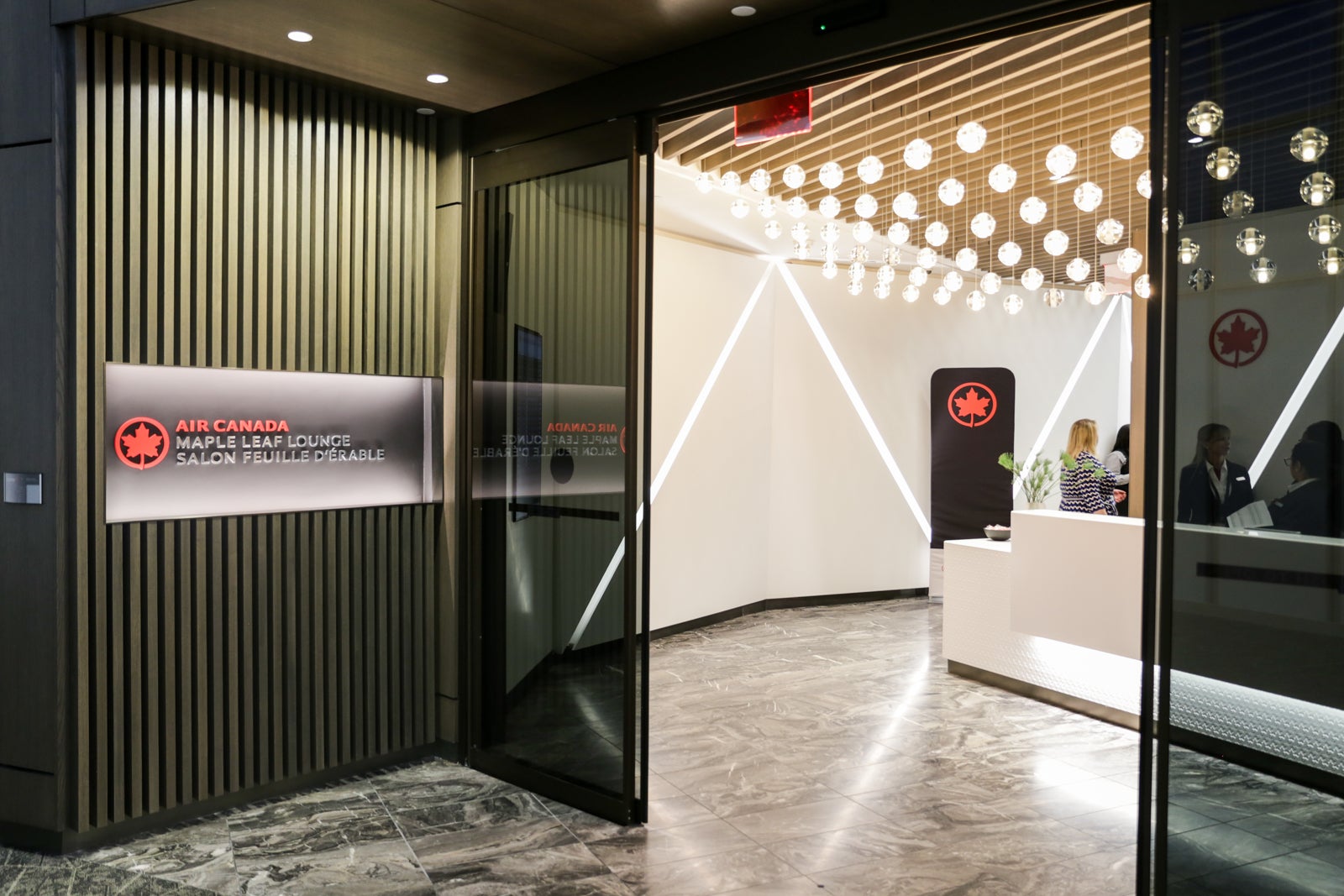 Over the weekend, LaGuardia Airport opened a brand new concourse as part of its long-awaited $8 billion revitalization project. The new Eastern Concourse of Terminal B is home to Air Canada, American and Southwest. With 11 gates, the new concourse is a massive upgrade over LGA's old drab, dark space.

This week, the terminal's newest airline lounge is being opened to the public. TPG had a sneak preview of Air Canada's new Maple Leaf Lounge, which is the airline's third lounge in the US and 23rd overall.

Right after going through security, you'll see a sign for the new lounge.

The lounge is located in LGA's Terminal B new Eastern Concourse, where you'll see a massive rendering of what the airport will look after construction is complete. Renovations to Terminal B's Western Concourse will be complete in 2020.

Once you enter the main hallway of the concourse, you'll see a series of escalators which you'll have to take to get up to the lounge. A United Club will also open on the second level in late 2019.

There's another map guiding you to the different gates, restaurants and shops in the new terminal.

This concourse feels so much less claustrophobic than some of LGA's other terminals that feature low ceilings and crowded walkways. During the daytime the space is flooded with light thanks to the concourse's massive windows.

Air Canada has claimed three of the new gates and has already moved its entire operation to the Eastern Concourse.

There's even a large model of Air Canada's Boeing 787 — I wish I could have nabbed one for the TPG office!

The lounge has a moderate capacity of just 126 travelers, although that's double the size of the airline's old lounge at LGA. Still, there's plenty of seating throughout the space. You'll find traditional tables were you can nibble on light bites.

There were about three dozen of these large sofa chairs spread across the 7,015-square foot lounge — the tables next to them featured USB and AC power outlets so you shouldn't have trouble finding a place to charge up.

Most of the seats have some sort of platform or table where you can place your computer or food. Original art is placed throughout the lounge too, Air Canada reps said that it's incorporating Canadian artists into the space, including this abstract series by Johanna Reynolds.

There are a few communal areas with couches.

A large open kitchen is located in the center of the lounge.

More seats overlooking the Eastern Concourse which flows into a private area with a large couch.

The nook could be a good place if you want more privacy.

At the far end of the room is a business center with a color printer — PCs should eventually be installed too, according to the airline's press release.

Bar-style seating is adjacent to the business center and overlooks the airport's gates and apron, making this a prime place for plane spotting.

Hidden behind the business center is a secluded area with five chairs. This could be a great area to catch some shut-eye or take a business call.

There was a small but elegant bathroom with mirrors that nearly touched the ceiling.

A small self-serve bar is available and includes four beers on tap.

You'll be able to pour yourself a glass of wine or champagne. Air Canada says it's incorporating Canadian alcohol selections into its choices — including the iconic Canadian beer brand Molson.

There a nifty water station that dispenses still, sparking or boiling water.

Coffee drinkers won't be disappointed with the Lavazza coffee machine.

There will be a variety of lite bites to pick from. I found a plate with assorted cheeses, cups of fresh veggies with dip and an extra colorful fruit plate. This food may not be representative of what's actually served now that the lounge is open to the public.

Pizza bread, pita bread and more were up for grabs.

Andrew Yiu, Vice President, Product at Air Canada spoke about the carrier's history at LaGuardia, mentioning that the airline has a 75-year history with the airport — it made its first flight from Toronto to LGA in 1945. HOK, the design and architecture firm that's heading up the entire LaGuardia renovation, also designed the new Maple Leaf lounge.

"The location of this lounge is a significant upgrade for our customers," said Yiu. Air Canada's old lounge was located pre-security which made for a bit of a headache when planning how much time you needed to get to the gate.

The airline will also launch its "Premium Agent" program which places specially trained agents at the lounge and check-in area.

"We have this program in Canada and it's been highly successful. And New York is the first city in the US where we are launching [this program]," Yiu added.

San Francisco International (SFO) will see an Air Canada lounge open in late 2019. There will also be a new Maple Leaf lounge at St. John’s in Newfoundland (YYT).

Air Canada's LGA Maple Leaf lounge is open from 5am to 8:45pm Monday through Sunday.

Unlike Air Canada's lounge in Newark, this space won't be a part of the Priority Pass Program.