Review: LaGuardia's New Terminal B Creates a Tale of Two Airports for Passengers

Articles
Max Prosperi is a part-time frequent flyer and travel writer and full-time student. Based in St. Louis, Missouri, Max covers a variety of topics with a focus on points, miles, and aviation.
Follow
Dec. 02, 2018
•
12 min read 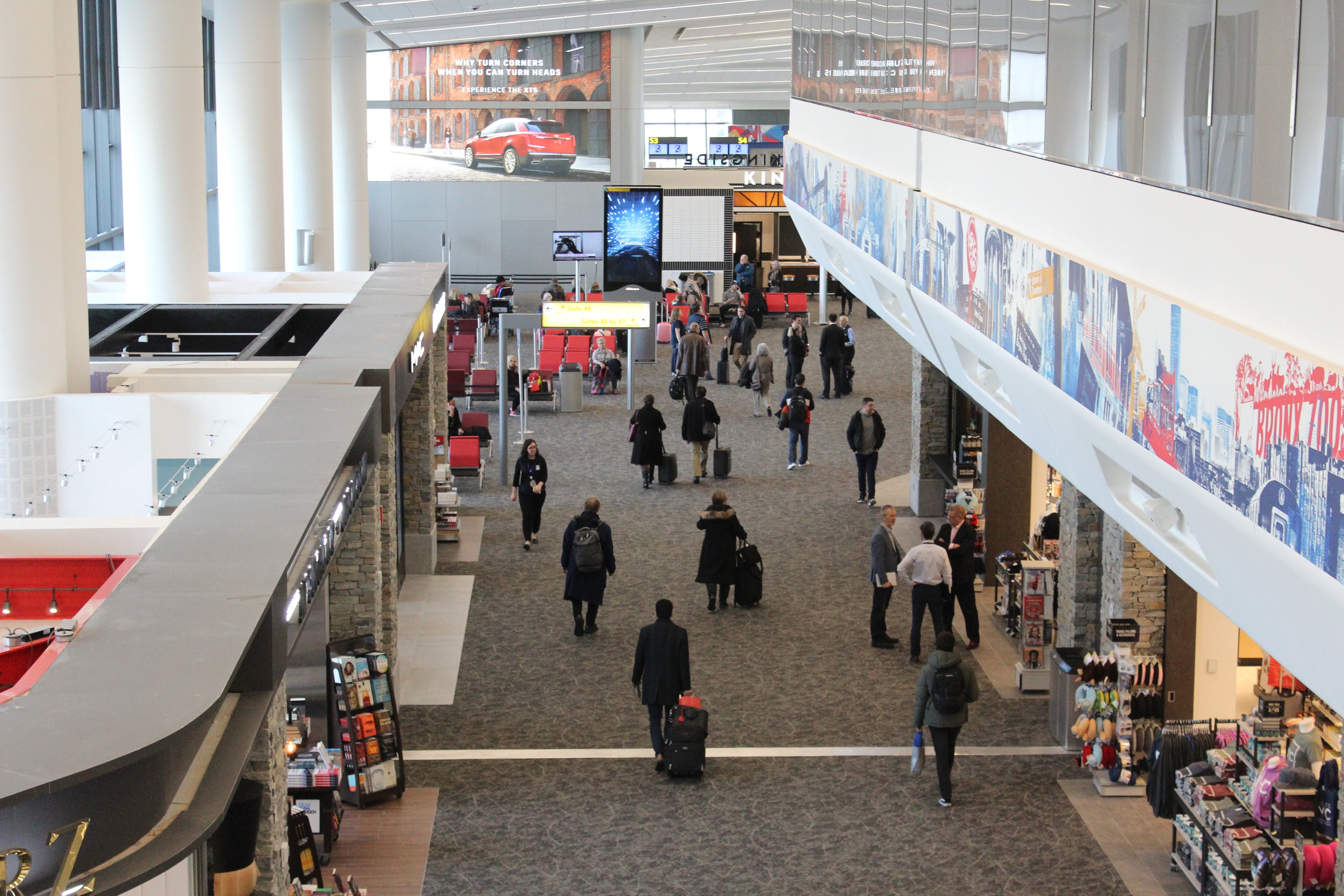 Many passengers thought the day would never come, but it has. The first new concourse in the multi-billion dollar overhaul of New York's LaGuardia Airport (LGA) opened to the public Saturday morning. Though just 11 of the airport's 72 gates are currently housed within the new space, the concourse gave passengers a glimpse of what's to be expected in the coming years.

With local restaurants and shops, new airline lounges, an abundance of natural lighting and modern passenger amenities, the new concourse, a part of Terminal B, felt more like New York-Kennedy's modernTerminal 5 than anything at LaGuardia previously.

Passengers arriving for flights out of one of the new concourse's 11 gates (seven more gates have yet to open) will still be greeted by the ugly and chaotic pre-existing facade of LGA's Terminal B. The new "headhouse," which will house all of Terminal B's airlines, doesn't open until 2020.

Passengers still have to walk through the dark and grim check-in hall to get to their gate. Even the recently re-opened security checkpoint, Checkpoint A, still reflected more of the old LaGuardia than the new LaGuardia. There was also a brief reminder of what life is like for passengers traveling through the old Terminal B gates as you made your way to the new concourse from the security checkpoint. It was almost as if you were at two different airports.

If you're lucky enough to be departing from a gate in the new Eastern Concourse, you will instantly notice a huge difference compared to other parts of LaGuardia.

The new concourse at LaGuardia's Terminal B

Passengers familiar with the existing concourses and terminals at LGA will likely recall how low the ceilings were or how dark and disgusting the structures had been. Even former Vice President Joe Biden made a now-famous remark about the airport, saying it was like something found in a "third-world country."

The new concourse featured tall ceilings, wide passageways and an abundance of natural lighting. The color scheme was airy and inviting. It felt initially more like a shopping mall or convention center than an airport.

The layout of the new concourse gave a feeling that operations flowed much better. Each gate was common use, meaning any airline that had leased gates at Terminal B could use any of the gates. Additionally, inside the concourse, a lack of walls, barriers and restrictive seating made for an open and flow-y feel. The openness of the new space made navigating the concourse seamless.

The New Concourse in Pictures:

Seating in the New Concourse

At each passenger gate, there was ample standard terminal seating. The traditional seating could be found in a blue and red upholstery, depending on which side of the concourse and which gate you're located.

While LGA is one of the worst airports for finding power outlets, there was no shortage of outlets at the new concourse. Most seats had power outlets between every other seat, and outlets could be found throughout the concourse in common spaces and at restaurants.

Restrooms in the New Concourse

Even the restrooms were remarkable. Not only were the restrooms gigantic, but they also felt very high-end. Another area in which LGA had severely lacked was restroom appearance and upkeep.

The bathrooms were some of the nicest airport restrooms I've come across in my travels. However, only time will tell if the airport is able to keep the new restrooms as clean as they were on day one.

As for common area seating, there was no shortage of innovative and comfortable seating. One of the more noteworthy seating areas was the concourse's parks. A representative from LaGuardia Gateway Partners spoke to me about these new innovative seating areas saying, "We designed our parks to resemble one of the iconic New York City parks. We wanted to make it seem as if passengers were actually in a park." Within the park, areas had bench seating and traditional tabletop seating, offering sweeping views of the apron and runways.

Mommy Points and other travelers with young and adventurous children will be delighted to know that the new concourse even featured a play area. Aviation enthusiasts might even recognize one feature of the new play area: a model of the iconic LaGuardia control tower. The play area could be found just to the right of and behind the information desk.

Dining in the New Concourse at LaGuardia Terminal B

Every restaurant in the new concourse had its roots in the New York City area. Passengers could choose from 5 Boroughs Food Emporium, Irving Farm Coffee Roasters, Kingside, La Chula Bar and Taqueria, Osteria Fusco and Shake Shack. While at the new concourse, I sampled a few of the restaurants.

At Irving Farm Coffee Roasters I enjoyed a non-fat flat white and marble loaf, both of which were quite tasty.

At Kingside I indulged in a spicy tuna sushi roll which, even outside of an airport, would have been amazing sushi.

Finally, at Osteria Fusco, I enjoyed a surprisingly fresh and flavorful burrata salad.

Shopping at the New Concourse at LaGuardia Terminal B

Shops, like the concourse's restaurants, were also locally-inspired or sourced, while there were also some traditional airport staples. Local stores included the famous FAO Schwartz and an area of the District Market which featured products from around NYC.

Notably absent from LGA had always been the premium shopping element. This was no longer the case. See for example MAC cosmetics.

Other retailers included a McNally Jackson bookstore, Hudson News and a duty free shop. The new concourse also featured a SPA Here, which offered spa treatments on the go.

The new concourse will also feature two airline lounges. Air Canada will open a brand new Maple Leaf Lounge in the coming days. United will also open a new lounge in 2019 when the airline moves its LGA operations to the concourse.

Though the Air Canada Maple Leaf Lounge was not officially open, I was able to take a photo of the entryway, which was beautiful and felt quite premium. I could also see the lounge through the glass wall on the second floor. The Maple Leaf Lounge will feature a variety of seating, boast warm colors and offer views of the terminal and the apron.

A Glimpse Into the Future of LaGuardia

Overall, the new concourse lived up to the hype. If the new Terminal B Eastern Concourse was any indication of what passengers could expect at the new LGA, LaGuardia will undoubtedly be classified as a world-class airport serving as a convenient gateway for those traveling to the New York City area.

The second phase of the new Terminal B project will be completed in 2020 and includes the brand new Central Terminal or headhouse and the Western Concourse. Until then, passengers will be able to experience the future of the airport at Terminal B Gates 40 - 59.