Great service, thin seat: Review of Aer Lingus on the A321neo in economy from Dublin to Philadelphia 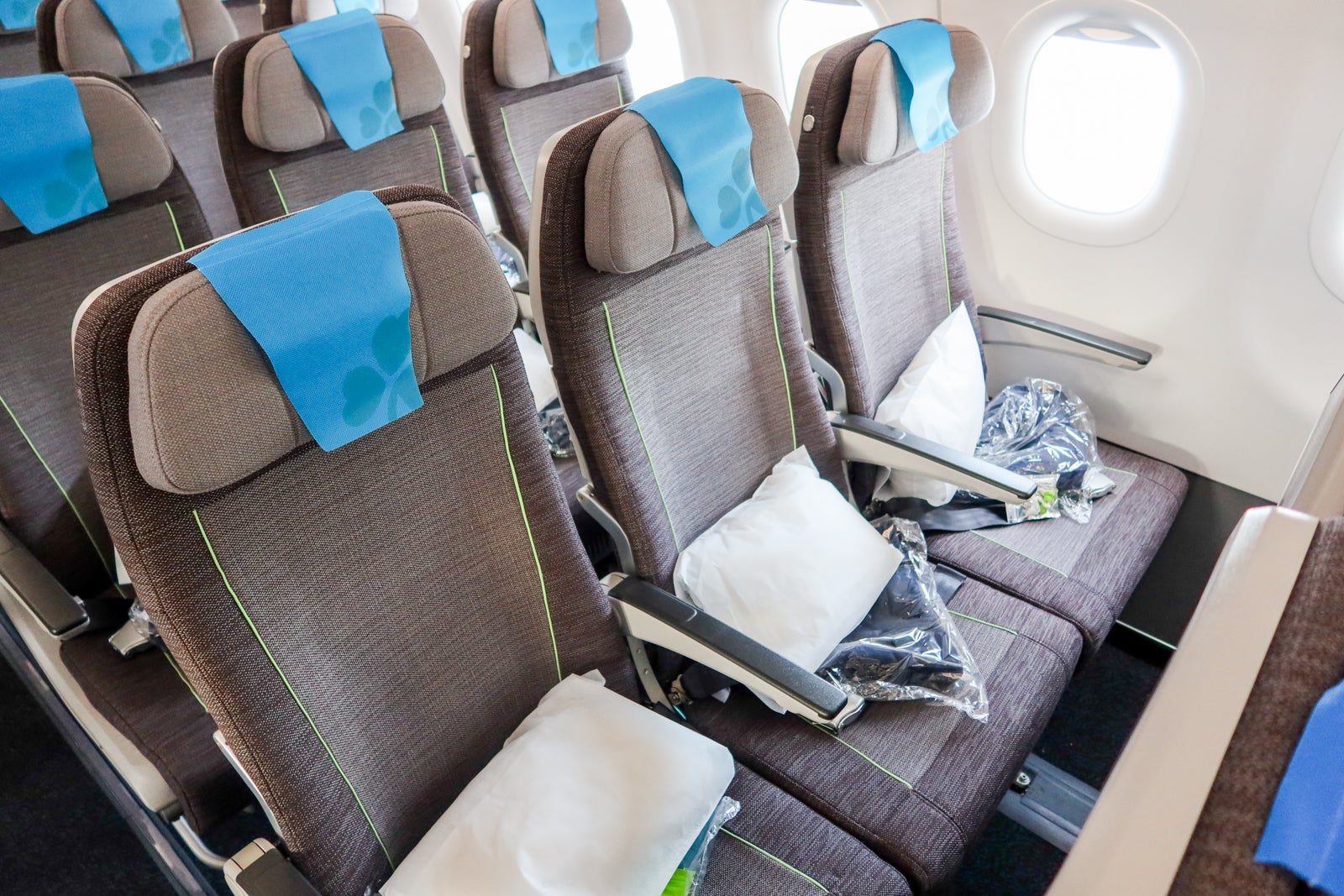 Great service, thin seat: Review of Aer Lingus on the A321neo in economy from Dublin to Philadelphia
This post contains references to products from one or more of our advertisers. We may receive compensation when you click on links to those products. Terms apply to the offers listed on this page. For an explanation of our Advertising Policy, visit this page.

Here at The Points Guy we’re all about testing out new ways to get from A to B. The launch of Aer Lingus' new A321neo routes to North America in 2019 was the perfect occasion to try out the Irish flag carrier’s latest product, in lie-flat business class and economy. The A321neo is an interesting aircraft: a single-aisle plane crossing the Atlantic, something that used to be rare but is becoming more common. So when we had to fly TPG UK staffers from London to New York for the 2019 TPG Awards in December, UK Director of Content Nicky Kelvin took the Aer Lingus A321neo in business class from Dublin to Philadelphia, and I did the same, in economy.

Most of Aer Lingus' 14 destinations in North America are served by twin-aisle Airbus A330 jets and a single-aisle Boeing 757, but the A321neo is appearing on more and more routes across the Atlantic. It currently flies from Dublin to Philadelphia, Newark and Hartford, Connecticut, as well as Shannon to Boston. With three in the fleet of the long-haul A321neoLR variant and five more to come, plus six of the even longer-range XLR model, you can bet that Aer Lingus will put it on flights to more destinations soon.

One of the advantages of flying with Aer Lingus is that you can use Avios to book, with significantly cheaper taxes and booking fees than other airlines. For example, if you’re flying during off-peak dates you can find availability from Philadelphia (PHL) to Dublin (DUB) for 13,000 Avios in economy and just over $100. Booking an award seat on British Airways from PHL to London Heathrow (LHR) during an off-peak period would also cost 13,000 Avios, but with $229 added in taxes and fees.

For this flight, however, we took advantage of the partnership between Alaska Airlines and Aer Lingus to make a last-minute booking. We redeemed 30,000 Alaska Airlines' Mileage Plan miles plus $57.75 in taxes and fees.

Do check however cash fares, as Aer Lingus tickets across the Atlantic can be remarkably cheap, which makes using points less attractive.

I arrived at a quiet and clean Dublin airport and was quickly directed to the fairly vast Aer Lingus area in Terminal 2. Minutes after arriving, I’d tagged my hold luggage using a self-service kiosk and dropped my bag at check-in, all without seeing another passenger. There were a few people in the security line, but it moved quickly and I breezed through.

Now, by far the best thing about flying out of Dublin is the ability to clear U.S immigration and customs before even stepping on the plane. This is a potentially massive timesaver given that immigration queues arriving in the U.S. can easily add hours to your journey after a long flight.

While the pre-clearance line was already short, I was able to pass through in literal seconds thanks to Global Entry – another worthy investment for U.S. citizens and frequent visitors to the States.

My coach-class ticket didn’t come with any lounge access, so I grabbed a quick coffee before heading to boarding gate 406 with a full hour to go before scheduled departure.

Note that there is a lounge at Terminal 2 accessible to holders of credit cards that offer Priority Pass membership, but also that you cannot enter it after passing through U.S. pre-clearance.

The space was fairly busy, clean and otherwise unremarkable. Boarding was completed quickly at the advertised time of 12.40 p.m..

I was greeted by a friendly crew as I stepped on board and I immediately got the sense this was a brand-new aircraft. Aer Lingus features 168 economy seats and 16 business class seats on board its A321neo; all looked immaculately kept as I walked towards my seat. The economy cabin featured six seats per row in a 3-3 layout and was finished with a smart blue and charcoal color scheme, with the airline's shamrock logo on the headrests.

After a brief inspection it was evident that this cabin was spotless from top to bottom. After all this A321 wasn't even two months old.

While my 22A window spot looked good to the eye, I was a little disappointed by the feel of the seat. 18-inch width and 31-inch legroom are pretty standard in coach, but slimline seats like these can feel hard and poorly padded. They sacrifice padding and seatback thickness to maximize legroom in the small space available.

I wouldn’t go as far to say the seat was noticeably uncomfortable, and thankfully I managed to secure an entire row to myself for the duration of the flight. But had the cabin been full I certainly would have felt cramped, not least because the armrests were thin and plasticky. The adjustable headrest was sufficient for the eight-hour day flight, but had this been a longer journey my chances of sleeping would have been minimal.

I stand at 5"11" on a good day and had a decent amount of legroom. Storage was limited to a small pocket in the seat in front of me along with overhead lockers.

The tray table was standard size, and sadly no match for my 15-inch MacBook, making it fairly difficult to get much work done during the flight.

The economy cabin had access to three toilets, all located at the rear end of the aircraft and kept clean throughout the flight.

The A321neo — that stands for "new engine option" — is an advanced derivative of the A321 familiar to many American Airlines, Delta and Spirit flyers in the U.S. I was pleased to see the inflight entertainment was as technologically up to date as the aircraft.

The screen was 9" and felt like the most responsive I've come across to date.

From new Hollywood blockbusters to TV shows and from flight-path tracking to games, there was an abundance of entertainment options.

The seat also featured a two-prong headphone jack along with handy USB and AC power sockets, with the latter located under the seat in front.

Aer Lingus didn't offer an amenity kit in economy, but a blue blanket, pillow and earphones were waiting for me at my seat when I boarded.

The blanket was large and soft, and certainly would have kept me warm enough if I had needed to sleep during the flight. The pillow, however, was cheap, thin and already coming out of its cover.

The headphones, branded with the Aer Lingus shamrock, unfortunately didn't perform particularly well. As a rule of thumb it is always worth bringing your own noise-cancelling headphones for economy flights rather than relying on those provided by the airline. If the aircraft uses a two-prong jack, like it did in this case, then you'll also need an adapter with you.

Aer Lingus offers free text messaging in coach at some fare levels, but my award-redemption ticket did not include that, so I had to pay for Wi-Fi, which comes with various pricing and allowance options. I opted for the most expensive package, 270 MB of traffic at €29.95 ($33.20). Speed wasn't suitable for streaming video (and video would have eaten up those 270 MB quickly) but was perfectly adequate for sending messages and scrolling through Instagram.

The first drinks service came around about an hour after take off. I asked for a Bloody Mary and was impressed that I was given the choice between Smirnoff and Grey Goose vodka. The drink was delicious and refreshing, though it did set me back another £6 ($7.80). Disappointingly there was no complimentary beer or wine either; I would have had a free glass of either at a higher fare level.

About 20 minutes later the meal service began, and I was offered the choice between chicken breast or pasta bolognese for my main course. I opted for the chicken, which was then handed to me on a tray with a handful of side dishes.

The chicken breast was served with carrots, potatoes and a rich pepper sauce. It all came together beautifully and the chicken in particular was cooked really well.

The side dishes were hit-and-miss. While the container of pasta and salad had almost no taste, the raspberry chocolate mousse dessert was light, creamy and absolutely delicious. With the meal service cleared away, the crew then proceeded to bring coffee or tea.

While I didn't need to order anything extra on this flight, I did look through a fairly extensive menu that allowed you to buy additional meals, snacks or sandwiches should you want to.

With around an hour to go until landing I was handed a small chicken wrap and chocolate brownie. It certainly wasn't enough to constitute an entire second meal — which is why we gave a one-and-a-half meal count rather than two in this section's summary — but it was a nice touch nonetheless on this relatively short day flight.

As you might expect on Ireland's flag carrier, the service on this flight was friendly and receptive from start to finish. Food and drink were always served efficiently and with a smile.

I tested the crew service button around an hour after the first meal service and was attended to in just under 20 seconds. Less than a minute later I had a cold Diet Coke sitting in front of me, which I thought was really impressive.

While I didn't have any standout interactions with the crew, I did overhear a passenger in front of me mentioning the fact that her pre-ordered gluten-free meal had been forgotten about. The crew were extremely apologetic and rushed back to the galley to fetch an appropriate meal, which they brought back almost instantly.

On the whole this was a really solid economy flight. The experience got off to a great start with a smooth check-in and ability to pre-clear U.S. customs. I loved the fresh, clean feel of the aircraft, and it was an absolute delight having a free row for the duration of the flight. The seat itself left much to be desired, and had the flight been operating at full capacity I don't think my experience would have been nearly as enjoyable.