Dublin' Down: A Review of Aer Lingus' New A330 Business Class 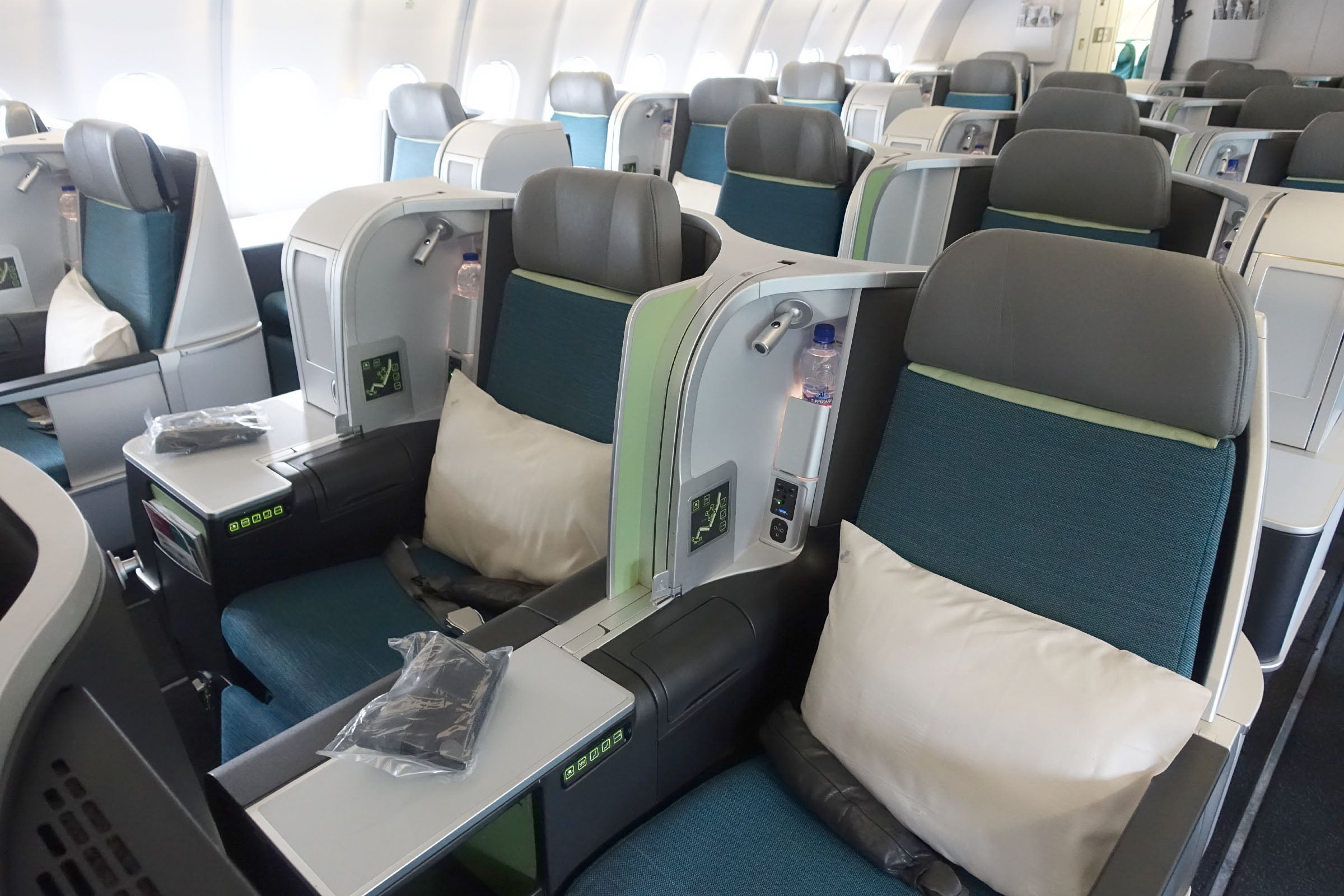 After a great flight on Qatar Airways' first Airbus A350-1000, I needed to make my way back home. TPG grabbed a seat on the airline's nonstop A350-900 flight to JFK, but we were after something a bit more creative for me, so I'd have an opportunity to do another review. The solution: Fly Qatar's Dreamliner from Doha (DOH) to Dublin (DUB) and hop an Aer Lingus A330 — with the new(ish) lie-flat business class — to New York.

Although Aer Lingus isn't a member of Star Alliance, the carrier does partner with United, and you can confirm award availability on United's site. I kept checking United.com to see if business-class awards would pop up, but they never appeared. Instead, we ended up booking a round-trip from Dublin (DUB) to New York-JFK with the outbound in business and the return in economy for about $1,875.

TPG took advantage of the 50% Pay With Points rebate offered by his Business Centurion Card, redeeming a total of 93,750 Membership Rewards points for the trip. I credited the flight to United, earning 3,179 redeemable miles.

Had we been able to book an award, the best option is via British Airways, since a one-way flight costs just 60,000 Avios. Alternatively you can book for 70,000 miles through United MileagePlus.

Ireland's main international airports — Dublin (DUB) and Shannon (SNN) — offer a unique amenity: US Customs and Border Protection Preclearance. As a Global Entry member, I never have to wait at US immigration, but Preclearance can be a big timesaver for international travelers. It also allows you to arrive as a domestic passenger — in this case directly into JetBlue's airside terminal at JFK.

There's even a new lounge in the Preclearance area, so you can grab a snack and drink once you're on the "US side."

I actually prefer this lounge over the Aer Lingus lounge in the main terminal area, so I didn't mind passing the time there until boarding.

The breakfast spread was modest, though, and not especially high-quality.

There were a couple of hot items, but they were honestly pretty gross — the scrambled eggs were crispy and dry, and the avocado was in terrible shape.

I didn't have long to wait before my in-flight meal, though, so I had a couple nibbles and headed to the gate.

This version of Aer Lingus' A330-300 offers a total of 30 lie-flat business seats, arranged in a staggered configuration.

Some seats are far better than others, so be sure to choose carefully!

This cabin has just two "throne" seats, which you'll find on a handful of other carriers as well — I had just flown in one on Malaysia's A350, for example.

While I could see which seats were open on ExpertFlyer, unfortunately I wasn't able to make my pick online.

The two thrones were already reserved, so I called Aer Lingus and requested 6A, a window-facing seat on the port side of the plane.

While 6A didn't have quite as much personal space as one of the two thrones, I found it to be especially private, given that it was at the back of the cabin and there wasn't much foot traffic.

The seat didn't have a ton of storage, but I did appreciate the large compartment just above the side table. There was plenty of room for my cables, phone and camera in there.

The seat controls were straightforward, but fairly limited. For example, instead of adjusting the back position my only option was to select one of the presets.

Going into lie-flat mode was cinch, though.

I was also very happy to see that there were dedicated air vents overhead — often an amenity that international carriers seem to either overlook or intentionally exclude.

Aer Lingus' small business-class amenity kit had the usual suspects, including a dental kit, eye mask, earplugs, socks and creams. It wasn't exactly a kit I'd toss up on eBay, but it did the trick.

I also got a large pillow and a nice comforter.

The other "amenity" was a set of noise canceling headphones, which weren't great.

Aer Lingus' in-flight entertainment system was modern, but the screen was on the smaller side. The content selection was decent, though.

There was also a moving map, of course, which I used to track our progress to New York — as much as I enjoyed this trip, I was pretty eager to get home by that point.

Aer Lingus offers Wi-Fi, but it doesn't come cheap. My 270MB "Aer Max" plan cost $33, for example, though you can buy a 120MB package for $16. Minutes after I made my purchase, a flight attendant came through the business cabin with 400MB vouchers — I sure wish I had known those would be coming before I made my purchase! I didn't even end up using all 270MB, though, since the Wi-Fi was exceptionally slow.

Just after boarding, a flight attendant came by with a beverage tray, including Champagne, water and juice. I went with a glass of bubbly — Aer Lingus serves Jean Pernet Champagne Tradition Brut NV, which retails for about $30 on the ground.

I had a second glass after departure, which was served with a mix of canapes.

The starter came after that. I was offered a choice of prawn cocktail or a goat cheese salad. Since a feta and yellow tomato salad was listed as the next course, I went with the prawns. The salad was great, but I wasn't a fan of the prawn dish.

Entree choices included a fishcake with sweet chili noodles, chicken with spinach and potatoes or beef fillet with potatoes and gravy. I asked the flight attendant for her recommendation, and she suggested the chicken. I was not disappointed.

Dessert options included a raspberry and white chocolate cheesecake or a selection of Irish cheese. I requested the cheese, which tasted great, even though it didn't look terribly impressive.

At that point I took a nice long nap, before waking up for the afternoon tea service just before landing. It wasn't a full meal, but the chicken pesto and egg salad sandwich slices seemed to do the trick.

I was also served a warm scone with clotted cream and strawberry jam. A flight attendant came through a couple minutes later with more scones, so there was definitely an opportunity to stuff myself full of carbs if I had so desired.

With less than seven hours of flying time, Aer Lingus biz was a great, no-frills option for getting from Europe to New York City. The food was good, the crew was friendly and there was free Wi-Fi (even though it didn't work very well). Preclearance in Dublin also makes US connections fairly seamless, especially if your next flight is on JetBlue.

Featured image by Photo by Zach Honig / The Points Guy.