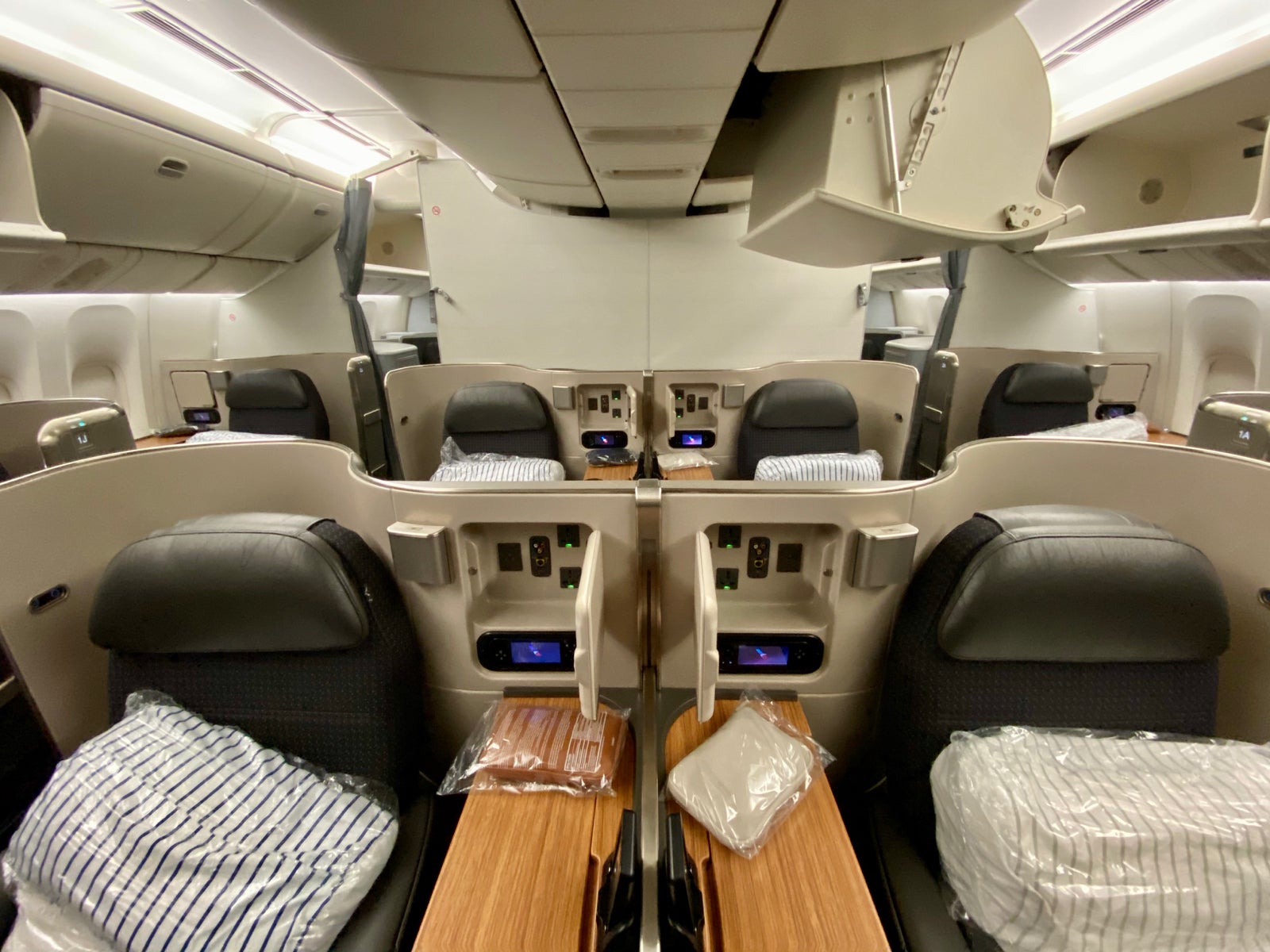 During the COVID-19 crisis, our team has temporarily ceased taking review trips. However, we are still publishing new flight, hotel and lounge reviews, from trips taken just before the lockdown. This article refers to a review trip taken in January. Please note that the route between Dallas and Hong Kong mentioned here is currently suspended due to the coronavirus and will resume on July 10, according to route-tracking site Airlineroute. When it does resume, you can expect a very different experience both on the ground and on board, with reduced service.

Record long flights were all the rage at the end of last year. When American Airlines' Oneworld partner, Qantas, tested nonstop flights from New York and London to Sydney, everyone was excited to hear what it's like to spend almost 20 hours stuck in a metal tube (we were aboard the New York one, and it was fine).

I, too, was enraptured by all the coverage. So much so that I decided to review the world's longest commercial flight. It was great, and I wanted more. So, as a newly minted American Airlines Executive Platinum member, I booked myself on the carrier's longest nonstop flight, from Dallas to Hong Kong.

What follows is what I learned in seat 2G, one of only eight in first class.

Everyone is using an upgrade certificate

You used to find first-class cabins on every major airline. As business class has become nicer and more private, that's no longer the case. So much so that American is now the only U.S. carrier to offer an international first-class product, and only aboard the Boeing 777-300ER.

While fares can get as high as $15,000 for a one-way flight from DFW to HKG, no one in their right mind should pay that much. And if they are, they should definitely choose Cathay Pacific over American. Instead, you should either be using miles or a systemwide upgrade to confirm a first-class seat.

While you can upgrade with miles, on my flight almost every passenger used a systemwide upgrade to get into first. Each year, four of these one-cabin upgrades are given to AA's top-tier elites. Though American has been getting much stingier about releasing business-class upgrade space, that's not the case with first. If you have expiring SWUs, this is a great way to use them; I did. I had booked a $3,300 round-trip business-class ticket from Hong Kong to Dallas, with the outbound on Cathay Pacific and return on American. I used an SWU when I booked the ticket to immediately clear into Flagship First (there's tons of confirmable first-class upgrade space on this route).

How much cargo are we carrying?

Though we were originally delayed due to a late arrival of the inbound aircraft, something else also slowed down our departure. When I got the gate, not only was it packed, but the gate agents were begging six customers to accept a $1,200 voucher in exchange for taking a later flight.

It took lots of coaxing to finally get passengers to agree to the offer. If I hadn't had a connection, I would've offered my seat. The whole volunteer process took so long that we ended up departing 15 minutes later than originally delayed.

I asked the captain about the situation when he got out of the cockpit for a rest break. (On flights this long, there are relief pilots.) He explained that due to the strong winter winds, combined with the amount of cargo AA is taking on these flights, there are often weight restrictions. Since my flight was totally sold out, we were overweight. And it's much cheaper for AA to bump passengers than it is to deny a cargo shipment.

The ground experience would've been much better in Hong Kong

American Airlines has invested tons of money into its lounges. With the recent opening and expansion of the Flagship Lounge network, AA elites and long-haul business- and first-class customers have access to above-average lounges, with substantial food offerings and relaxing spaces.

As a first-class customer, I had access to an even more exclusive area, called Flagship Dining. While the Flagship Lounge only has buffet service, the dining facility is basically an upscale sit-down restaurant. My meal was good, and the service was great.

However, had I been originating in Hong Kong, I would've had access to a true first-class lounge. In fact, when I arrived in HKG, I used The Pier lounge during my layover. Not only was there a sit-down restaurant, but I got a 15-minute massage, spent some time in a private day suite and drank top-notch liquor.

American's lounges are nice, but, just like the first-class product itself, pale in comparison to some competitors'.

Welcome to my office

American's first-class seat isn't cutting edge. There's barely any privacy and there's almost no storage space. The good news is that it's definitely larger and better than the reverse-herringbone biz seats.

Though the seat isn't great, relative to the competition, there's one really unique feature — it swivels. For taxi and takeoff, you need to be facing forward, but once airborne, you can have some fun. Most passengers will just rotate the seat ever so slightly inwards to better align it with the footwell. However, it keeps going.

If you go a full 90 degrees, you'll end up in the desk position. There's even a table that folds out if you'd like more space to work. I turned my seat into a desk for a bit, and really enjoyed the thrill of being at a "desk" while flying more than five miles above Alaska at 500 mph.

Keeping in touch while traveling abroad has only gotten easier. Inflight Wi-Fi has become a standard feature on planes across the world. However, there's a wide spread in what it costs to access the internet and the speeds you'll get.

On the one hand, take Singapore Airlines. On the world's longest flight, you may end up paying over $1,000 to stay connected throughout the entire flight. On my flight to Hong Kong, American charged just $19 for Wi-Fi coverage the entire flight. Plus, there were no data caps.

Much of American's operation needs improvement, but internet access isn't one of them. Wi-Fi was fast enough to load a website before you could even text "Hi Mom."

Throughout my flight, there wasn't much first-class service. To start, the flight attendants' bags were in the overhead bins when I got to my seat. Not only wasn't I welcomed or thanked for flying American, but meal orders were taken as "beef, chicken or fish?" Drink orders weren't served tableside and were never refilled.

In fact, throughout the night, flight attendants congregated in the first-class galley to discuss their plans for the Hong Kong layover and share their upcoming trips. Though there are definitely exceptions, I was underwhelmed by the level of service I experienced in this first-class cabin.

I didn't really like the food on this flight. It was totally average and unmemorable. The primary meal service was lunch, which began right as we leveled off at cruising altitude. There were five courses, and nothing was great.

The caviar starter was tiny, they ran out of lobster and my fish was overcooked. But, to be honest, I don't remember any of that. Why? Because any meal becomes a good meal when dessert is served. And American takes the cake for serving a great dessert.

I had the signature sundae, and it didn't disappoint. The Haagen Dazs vanilla ice cream was great, but the toppings were better. I loaded mine with hot fudge, berry sauce and whipped cream. It was one of the best sugar comas I've had in a long time.

Is this Emirates first class?

During the middle of the night, I woke up in a pang of hunger. I had to interrupt the chatty flight attendants to take a look at the snack cart in the galley, and I wasn't really impressed with any of the prepared or packaged foods. I took pistachios, but I wasn't full.

So I went back to my seat and ordered one of the two midflight meals (c'mon American, you can do better than serve two appetizers as midflight snacks on a 17-hour flight). I ended up eating two mezze samplers filled with hummus, baba ghanoush, olives and warm pita bread. I went back to sleep and dreamed that I was back in Emirates first class.

The first-class experience could definitely use some improvement. The ground experience and inflight Wi-Fi was above average, but the seat and meals were mostly underwhelming. Coupled with lackadaisical and inattentive service, AA's offering isn't the world's best in long-haul first class.

But with that said, American's longest flight was one for the books for me as an aviation geek. I loved the long flight. If you have American Airlines upgrade certificates to burn, this is a good way to use them.