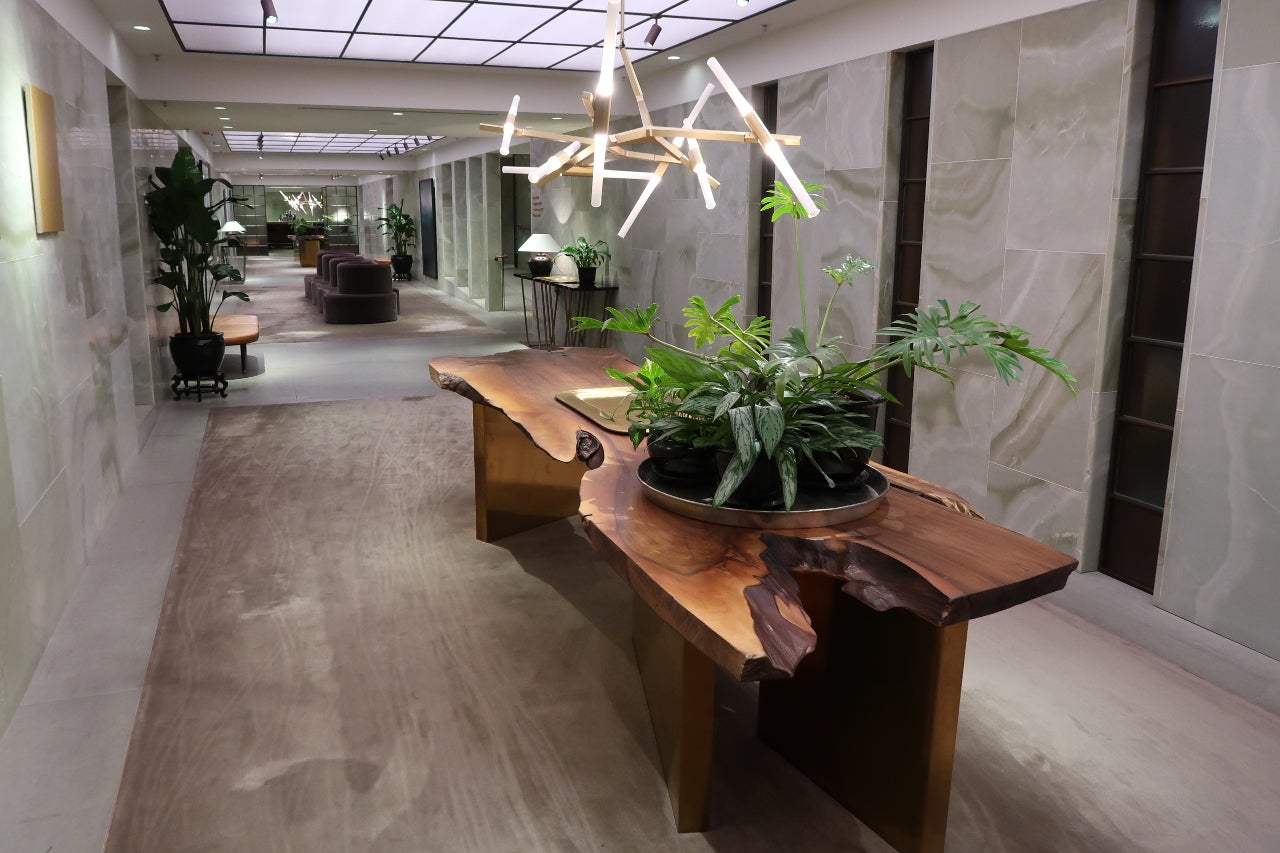 The Pier First Class lounge, open daily from 5:30am to 12:30am, feels like a comfortable living room or a posh country club. It's a relatively small lounge but its design and lighting make it feel even more intimate. Join me on my most recent visit.

As Oneworld Emerald elites departing on a Oneworld airline, my husband, TPG Points & Miles Writer JT, and I had access to any of Cathay Pacific's HKG business class or first class departure lounges. We each could've brought a guest as well. Oneworld Sapphire elites would only have access to Cathay Pacific's four business class departure lounges, but they'd get to bring a guest as well.

On the way to The Pier, you'll pass other Cathay lounges. Be careful not to miss the understated entrance near Gate 63.

To the left from the wooden table is a short hallway. To the left down this hallway is "The Pantry" and straight down the hallway is the bar and a large seating area.

The bar area has light music, but otherwise fits in with the relaxed, low-key feel of the lounge.

To the right of the large wooden table is a longer hallway. Down this hallway to the left is "The Library." "The Library" connects to the large seating area already mentioned. Most seating is soft plush chairs, but there are more supportive choices if desired. Most of the seating areas feature views of the apron and a few gates.

Down the hallway on the right you'll first see "The Bureau" which features 6 large work desks with Apple computers.

In "The Bureau" each computer gives users the opportunity to use MacOS or Windows. However, during our visit everyone in "The Bureau" was using their own laptop.

After "The Bureau" is "The Retreat" on the left and the bathroom area on the right. There's a large seating area in this part of the hallway.

At the end of the hallways is the dining room.

"The Library" features a selection of magazines and newspapers. English-language magazines available during our visit included Wired, Cosmopolitan, Global Health and Travel, Fortune and Golf Digest.

Three complimentary 15-minute spa services — "Signature Gentlemen's Tonic Foot Massage," "Reinvigorating Neck, Shoulder & Scalp massage" and "Signature Gentlemen's Tonic The Traveller Eye Revitaliser" — are offered at "The Retreat." Although the lounge didn't feel crowded, the first open spa appointment at "The Retreat" when we inquired at 3:30pm was 6:20pm. Our flight was scheduled to depart at 6:20pm though so we didn't get to enjoy any spa services this time.

The shower rooms at "The Retreat" certainly pass the test. JT was able to get a shower room immediately when he inquired. In addition to having a high rainfall shower head, the shower rooms feature a chair, bench, hanger, hair dryer, make-up mirror and great-smelling toiletries.

"The Retreat" also offers eight day suites. Each features views of the apron as well as a daybed, reading light and privacy curtains. Although they seem perfect for taking a nap, we didn't have time to enjoy a day suite on this visit.

Most seating in the lounge features USB and three prong UK-style power outlets hidden in pull out drawers. We were easily able to get a UK-to-universal power adapter from the customer service desk.

I found the Wi-Fi to be quick enough for web browsing and emails. One gripe: the password wasn't obviously posted throughout the lounge, but I found it in "The Bureau."

The large refrigerators in "The Pantry" contain various cold items in cute little mason jars and a wide variety of drinks including canned sodas and beers, teas, coffee and bottled juices. When we visited mid-day, the mason jars contained salads, fruits and puddings. There was also beer on tap.

Interestingly, the Signature Drinks listed at the top of the beverage and wine list are non-alcoholic. We tried all three: Ginger Forest is crisp and refreshing, Cathay Delight is like a good-tasting health smoothie and Orange Dream tastes exactly like an orange creamsicle.

Self-serve Harveys Bristol Cream Sherry and Taylor's Fine Ruby Port, as well as chocolate-covered nuts, are available on a tray in the main seating area.

The Dining Room had eight other groups when we arrived, but the servers did a good job of spacing out the groups so that it still felt quiet.

The appetizers were small but nicely presented. The Indian Paneer Tikka had light seasoning, but the paneer was overcooked.

The Tropical Shrimp Salad on the other hand was fruity and fresh with two shrimp sitting atop pineapple salsa with a coconut glaze drizzled around the plate.

Shortly after we finished our appetizers, our main dishes arrived. JT's Stir-Fried Duo Scallop came on a rounded tray. The tray included a bowl of stir-fried vegetables and lightly marinated scallop chunks as well as a bowl of rice.

My Gnocchi al Formaggio came in a bowl with mushrooms, spinach and Gorgonzola cheese. There was a light cream sauce that fit the occasion well since a heavier sauce wouldn't have been appealing before a 14-hour flight.

There are ample staff working in The Pier. Used plates, glasses and other items were quickly and quietly removed. Service in the dining room was quick. Any request — including obtaining a power adapter and storing a carry-on — was met quickly and with a smile.

The only time we had to wait was at the bar. Although the bar wasn't crowded, it took the bartender a while to notice we were ready to order. Even once we ordered, she made the task of making two Signature Drinks seem like a burden.

The à la carte dining, massage services, day suites and comfortable, quiet seating areas make The Pier a very attractive lounge option. The massage services and day suites can fill up quickly though, so if you're interested be sure to put your name on the list as soon as you reach the lounge.

Both times I've visited The Pier First Class lounge in HKG, I've wished I had more time to enjoy. So if you get the chance to visit, make sure to arrive at the airport earlier than normal or book a longer layover. You won't regret it.