Articles
Zach Griff is a senior reporter at TPG. He writes travel and product reviews, deep dives into loyalty programs, news about the airline industry and more.
Follow
May 23, 2021
•
7 min read 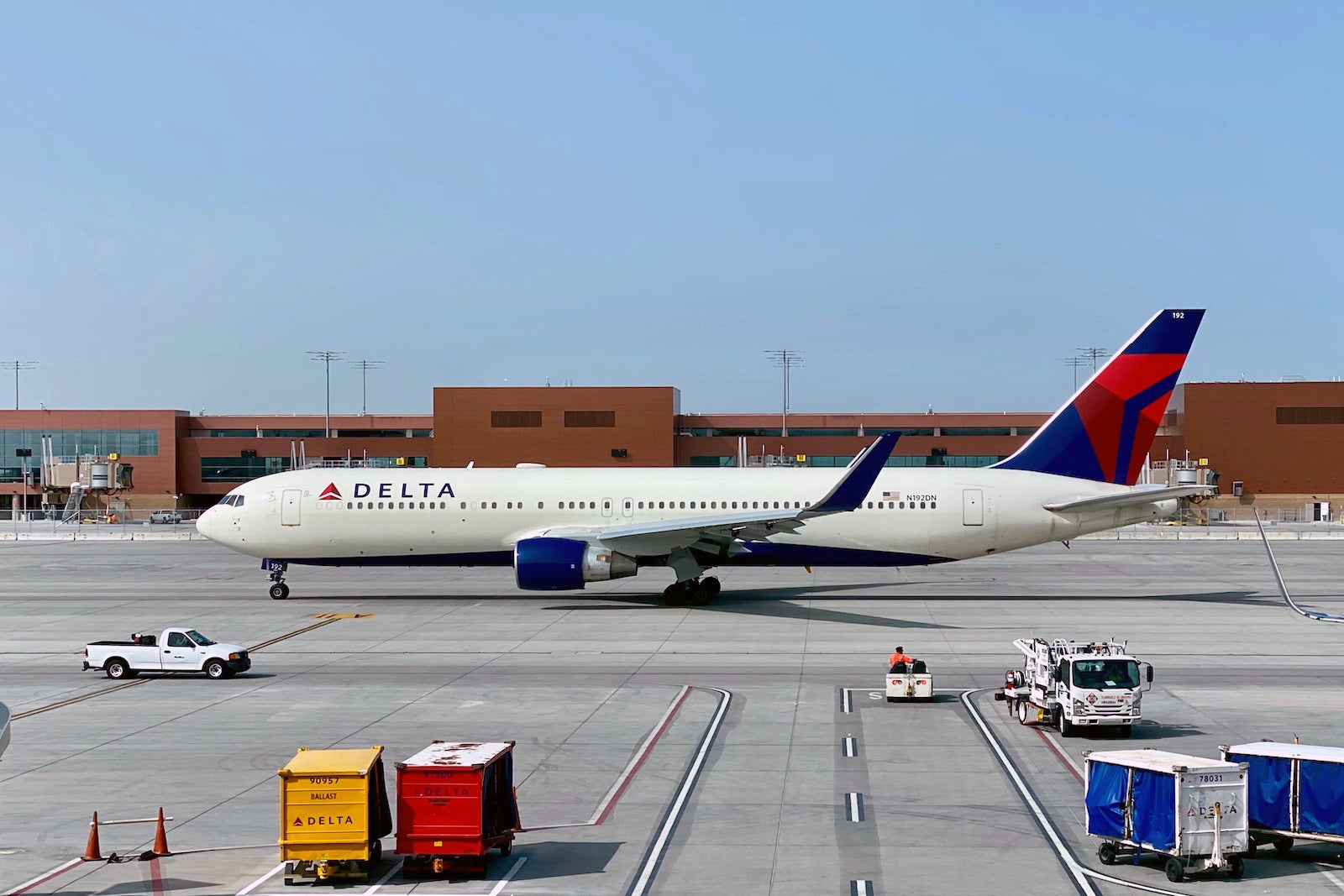 With long-haul travel still largely suspended, airlines have plenty of spare wide-body jets. Instead of parking them in the desert, American, Delta and United are deploying their largest planes on high-profile domestic hops.

That represents a massive upgrade for flyers in the pointy end of the plane. Relative to the traditional domestic first-class recliners, these jets sport lie-flat business-class pods up front, and some also feature dedicated first-class and premium economy cabins. Even coach flyers will appreciate that these jets are outfitted with seat-back entertainment from nose to tail.

Throughout the pandemic, I’ve re-routed some of my domestic travel to specifically fly a twin-aisle plane. I even joined a crew of TPG reporters for a four-cabin review of American Airlines’ Boeing 777-300 service between New York-JFK and Miami (MIA).

But despite the generally improved passenger experience, I’ve recently noticed some downsides to flying a wide-body domestically.

Have to fly to and from major hubs

This one’s simple. If you’re trying to snag a seat on a domestic wide-body flight, you’ll need to fly between two major airports.

For some, the inconvenience of getting to a hub could far outweigh the benefit of a lie-flat seat for a short domestic hop.

Case in point: this summer, American Airlines will exclusively fly Boeing 777s between New York-JFK and Miami (MIA). I live in lower Manhattan, so JFK is by far the least convenient of NYC’s three major airports for me. I’d need to leave my apartment earlier and pay a more expensive Uber fare to get to JFK, relative to Newark or LaGuardia.

In Florida, my family lives in Boca Raton, right between Fort Lauderdale (FLL) and West Palm Beach (PBI). Miami is (at least) an additional 30 minutes from my parents compared to South Florida’s two smaller airports.

For a two-and-a-half-hour flight from New York to Florida, I’d only consider taking the wide-body if the flight times worked best, or I was first meeting friends near the Miami airport. Otherwise, it’s LaGuardia or Newark to PBI or FLL for me.

In addition to trekking to a major hub, flying on a wide-body means that you’ll need to factor in additional time for a slower boarding and deplaning process.

With roughly double as many seats, boarding and deplaning take longer. Admittedly, there are two aisles to ease congestion, but nevertheless, boarding still starts earlier for large planes.

Going back to my example of flying from New York to South Florida, my goal is usually to minimize door-to-door time, especially if I have plans on either end.

Adding a wide-body to the mix, especially if I’m seated in coach, slows things down.

To stay connected when traveling abroad, the big 3 U.S. airlines have outfitted their largest jets with global Wi-Fi internet connectivity. American and United mostly partner with Panasonic, while Delta’s international fleet is split between GoGo’s 2Ku and Ku network.

While these networks work just fine for domestic segments, the speed and reliability are generally far worse than my preferred satellite Wi-Fi provider, ViaSat, which you’ll find on a good chunk of AA narrow-body jets, some Delta and United planes and on all JetBlue flights.

If I’m flying during business hours, having access to fast and reliable Wi-Fi is a must — one more reason to consider avoiding a wide-body.

There’s no question that twin-aisle planes offer a much better inflight experience up front. With lie-flat pods, large seat-back monitors and plenty of storage, business- and first-class flyers are in for a big upgrade compared to standard domestic recliners.

However, it’s a whole different story if you’re flying on coach. That’s because the odds of sitting in the dreaded middle seat are higher when flying on the largest wide-body jets.

The coach cabins on United’s mainline domestic narrow-body jets are arranged in an industry-standard 3-3 configuration, with an equal number of aisles, middles and windows.

Just note that smaller wide-body jets, like the Boeing 767, have fewer middles per row, thanks to its favorable 2-3-2 configuration. As such, you’ll want to pay close attention to the seat map and aircraft assignment when you’re booking.

Do note, however, that some travelers, especially families traveling with younger children, might prefer to fly in economy on a wide-body because most seats have built-in entertainment screens, whereas many AA and United domestic jets don’t feature them.

Also, elite frequent flyers might prefer widebodies since the premium economy cabin is often available for no extra charge.

Despite four reasons to avoid flying an internationally equipped jet on a domestic hop, it could still make sense to choose with the larger plane.

For one, the longer the journey, the more comfortable the premium inflight experience. I don’t need a lie-flat pod for a short hop from Dallas to Chicago or Miami to Charlotte. But Newark to Denver or Washington to San Francisco? You bet I’ll be searching for one.

Plus, if you’re looking to maximize onboard social distancing, you can’t beat a business-class cabin on a wide-body plane, where each seat is essentially its own suite.

With most international travel still off-limits due to the pandemic, the thrill of being on a heavy jet could be enough to sway an aviation enthusiast to give it a try — like it already has for me multiple times this year.

Related stories
Using miles and points to book airline tickets and hotels for others
Maui magnificence: A review of Kaanapali Alii, a Destination by Hyatt Residence
Target’s big annual gift card sale is this weekend
What are points and miles worth? TPG’s December 2022 monthly valuations
Featured image by (Photo by Zach Griff/The Points Guy)
Editorial disclaimer: Opinions expressed here are the author’s alone, not those of any bank, credit card issuer, airline or hotel chain, and have not been reviewed, approved or otherwise endorsed by any of these entities.