Articles
Christian Kramer is the General Manager for The Points Guy UK, based in London. Having lived in different countries and with a previous career in financial services, he is an Avios, Oneworld Alliance and general aviation travel expert.
Follow
May 15, 2019
•
13 min read 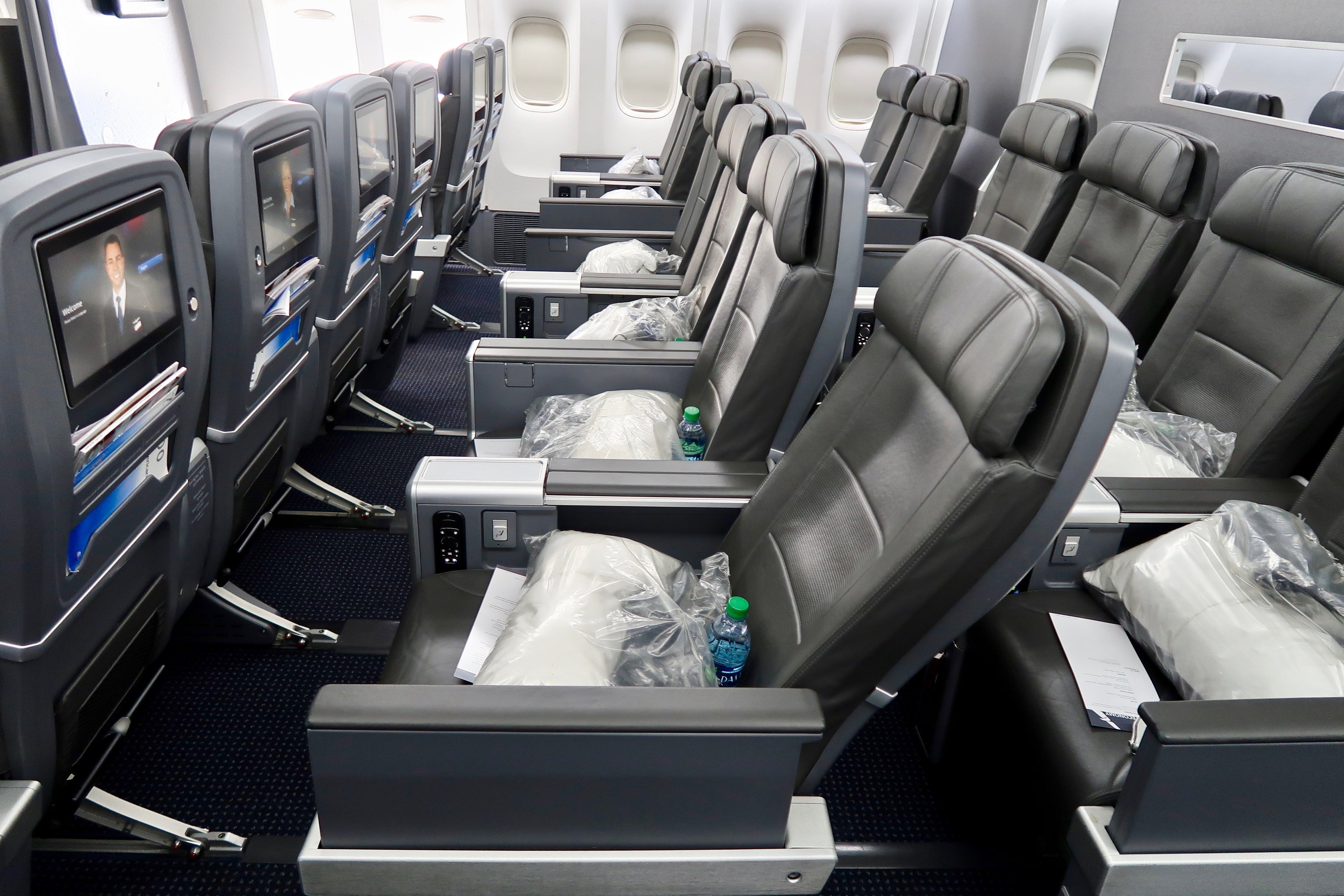 Just Premium Enough: American Airlines' Premium Economy on the Boeing 777-200ER From New York to London
This post contains references to products from one or more of our advertisers. We may receive compensation when you click on links to those products. Terms apply to the offers listed on this page. For an explanation of our Advertising Policy, visit this page.

American Airlines recently introduced a true premium-economy product. Previously, the airline had a Main Cabin Extra cabin, which essentially gave passengers in the first few rows of the economy cabin extra legroom. It was not a distinct product, though.

Having recently flown British Airways World Traveller Plus, I was keen to also try out the AA product and see how it compared. A day flight from New York City is a good way of avoiding those just-too-short red-eyes into London -- especially when not traveling in a lie-flat seat.

On the day that I flew, the jet stream was particularly strong, and our flight took a mere five hours and 50 mins!

We booked this flight as part of a round-trip ticket from Madrid (MAD) to New York-JFK and then from New York to London Heathrow (LHR) for €1,251 (about $1,402). American regularly charges 110,000 (or more) AAdvantage miles and the requisite $5.60 in taxes and fees for one-way premium-economy flights originating in the US on its own metal, which is an astonishingly high rate. Luckily, you can book through British Airways at much more reasonable rates: 40,000 Avios each way, though it's likely going to increase to 41,250 at the end of the month. BA is a 1:1 transfer partner of both American Express Membership Rewards and Chase Ultimate Rewards, meaning Avios are relatively easy to amass. Plus, Chase is offering a 30% transfer bonus to British Airways, making a redemption even more attractive.

American Airlines has its own dedicated terminal at JFK, Terminal 8. Though I've seen it busy in the mornings, it was quiet and calm when I arrived around 9am for my 11:05am flight. There are two daytime flights between Oneworld alliance partners British Airways and American Airlines, with BA operating the earlier one (currently scheduled at 7:55am) and American the later one (usually scheduled for 10:10am). I was flying during that window in late March when the clocks had already gone forward by an hour in the US but not yet in the UK, and thus all departures were adjusted to be an hour later, so that arrival times into London could remain the same.

Given my British Airways status, I was able to use the Flagship check-in area, which had no one else waiting. I have Global Entry for the US, which also gives me TSA PreCheck security, and was through check-in and security in less than 10 minutes, but lounge access isn't included in the price of a premium-economy ticket.

Terminal 8 is essentially two parallel long buildings connected via an underground walkway. For those with status or traveling in international business class, there is a flagship lounge in the main building (which houses check-in and security), as well as an Admirals Club in the same building and the outer building. Though walking distances can be big, there are moving sidewalks to help make the journeys, and I liked the simple layout, design and views from Terminal 8.

Boarding commenced a good 45 minutes before scheduled departure time, and I was one of the first premium-economy passengers to board.

My flight was operated by a 19-year-old Boeing 777-200 that had recently been refurbished to include the premium-economy cabin. It seats 24 passengers over three rows in a 2-4-2 layout, and the seats were 19 inches wide with a pitch of 38 inches between them.

My first impression of the cabin was positive: It seemed fresh, and I liked the look and feel of the seat itself and the cabin at large. There really is something classy about leather seats (compared to British Airways' World Traveller Plus seat).

I had chosen a seat in the front row to avoid climbing over others or being climbed over. All window seats were taken, but I was happy enough with my aisle seat in Row 13. Legroom was essentially unlimited, and there were a wall and curtain between the premium-economy cabin and the business-class cabin.

Each seat had a fold-down footrest, which worked slightly differently in the front, as it came out from the seat itself rather than the seat in front. I have never found those to be comfortable — it doesn't stretch out far enough (and I am by no means particularly tall).

The recline of each seat proved to be decent, and there was a good amount of storage space in the overhead bins for all passengers in this relatively small cabin.

The tray table folded out of the armrest and could be folded to half the size for holding drinks.

My left armrest, the one by the aisle, also folded down into the seat, to provide handicap access.

The seat had a small remote control and three simple seat functions, which worked fine and as expected.

The lavs for premium economy were shared with economy passengers. There were some halfway through the economy cabin as well as at the back of the aircraft.

Walking back to the toilets brought home just how tight a 10-abreast configuration on a 777 is. I saw passengers and crew walking sideways down the aisles to avoid bumping into others -- the 3-4-3 configuration that many airlines are now installing makes for very narrow aisles in the coach cabin.

I liked American's inflight entertainment system. I found it responsive, the screens came in a decent size, and the selection was attractive. In the front row, screens folded up out of the side armrest, while in other rows they were in back of the seat in front.

There were charging points between each seats, as well as Wi-Fi, which, though it took a while to get going, worked fine throughout the flight. I liked American's pricing structure -- I paid $19 for the duration of the flight. Compare that to Swiss, which charged me about $65 for 250 MBs.

There was a blanket and pillow on each seat, as well as a bottle of water, a basic amenity kit and very decent headphones (better than some airlines' business classes offer). The pillow and blanket were of good quality.

My only criticism is that I am not a fan of the plastic Cole Haan amenity bags. Not at all. Plastic just looks and feels cheap and nasty. I'm told that American is in the process of upgrading its amenity kits, but on this flight it was still handing out these subpar kits.

I had difficulty finding where to plug my headphones into the seat (as did my neighbor). The answer: under one of the armrests, right at the back. It's difficult to reach unless the armrest is flipped open. Otherwise, all in all, the amenities and IFE offerings were very good.

Menus were on the seats as passengers boarded, though they turned out to be the wrong ones (these were for a night flight rather than a day flight).

I have had bad experiences in past flights with AA where I haven't gotten my first meal choice, though that has usually been when flying on domestic US flights in first class during a service that started from the back. Since I'm generally not a fan of the second- or third-choice options that I've been presented with in the past, I usually preorder online. For this flight I selected the slow-roasted beef option.

Generally speaking, I find AA's food offerings to be quite decent in premium cabins. The portion sizes are bigger and tend to be more, well, American, but more often than not, I like the food.

Lunch on this particular flight was decent but bland. The salad dressing could have been more exciting, and the potatoes with the main course were borderline undercooked. The beef was tender enough, though there wasn't much of it. The cheesecake was good if generic.

The second meal was a ratatouille stromboli. Without a picture on the box, I would have had no idea what to expect. Essentially, it was vegetables in a pasty, and though it tasted OK, it neither looked nor tasted particularly premium. My understanding is that the premium element was that it was a hot meal, whereas economy-class passengers got a cold one.

Service on this flight was not memorable or overly attentive, but I never struggled getting a refill of my drink, and I appreciate that AA passengers get full cans of soft drinks, though I always have to tell the crew to go easy on the ice to avoid a glass full of ice with not much room left for a Diet Coke.

American Airlines was late to the premium economy market, but that means that they have a fresh, sleek-looking and generally very good hard product.

The soft product has been significantly improved over the recent years, too, and I am a fan of AA's IFE and Wi-Fi. While the food and service was not the most premium experience ever, it was good overall -- and significantly better than in economy.

As many airlines have continued to densify the economy cabins on their 777s to include 10 seats across, the economy experience has become much less comfortable. Premium economy, while at a very different price point, provides enough of a premium experience to justify the jump from economy, while at the same time not requiring passengers to shell out the many thousands of dollars it requires to purchase a business-class ticket.