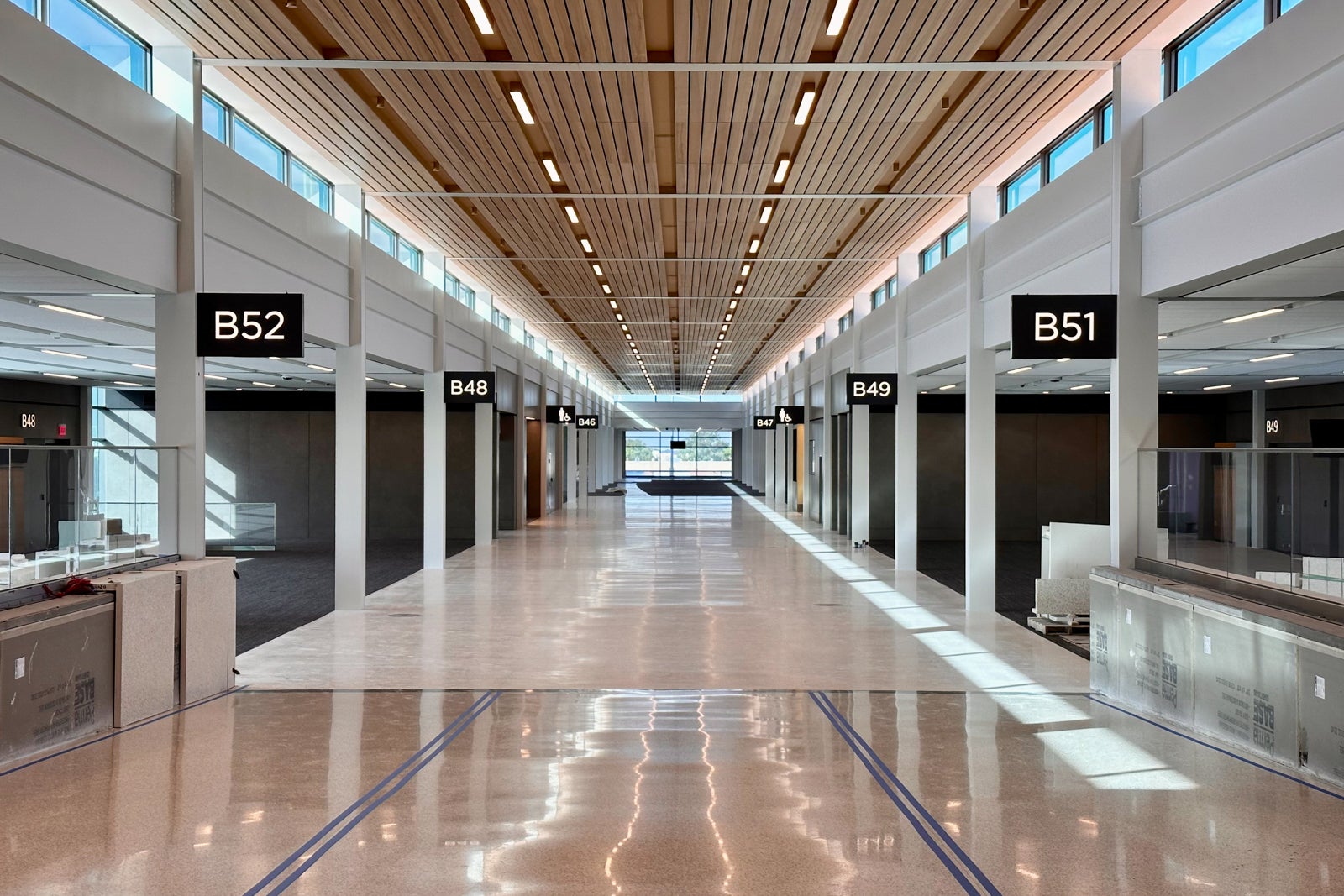 Airport construction is notorious for being delayed and way over budget.

Yet, the Kansas City Aviation Department is well on its way to pulling off a big feat in the aviation world — one that many locals in the surrounding community never thought would happen.

The airport authorities are building a brand-new terminal at Kansas City International Airport (MCI) in Missouri that’ll replace the existing, aging facility. When the project broke ground in April 2019, authorities estimated completion in 2023 with a budget of $1.5 billion.

Just more than three years later, the new facility is 90% complete and on track to open by March 2023, coming in well within the original budget.

Even in a perfect world, pulling off an on-time and on-budget airport construction project is challenging. A global pandemic and the associated supply chain and human resources bottlenecks make it even more difficult. So, it's easy to see why Patrick Klein and Justin Meyer — the airport’s director and deputy director of aviation, respectively — couldn’t be more excited about the outcome.

It wasn’t always good news for the airport authorities in Kansas City. The proposed new terminal ran into considerable headwinds getting buy-in from residents and politicians alike. It took substantial effort to sway public opinion to support the new construction.

As construction enters the final stages, the airport invited TPG for a hard-hat tour of the new terminal. Even though there’s still some work left to do, the new Kansas City Airport terminal is sure to impress even the most vocal critics.

The upgrades are noticeable from the minute you pull up to the departures curb.

For the first time in Kansas City, the arrivals and departures areas are split between a lower and upper level, providing more space for motorists and commercial vehicles to pick up and drop off passengers.

When you arrive, it feels like you’re entering a much more modern airport, thanks to the tall Y-shaped support beams holding up the roof that protects two of the vehicular lanes.

The massive check-in hall is designed for the 21st century, with floor-to-ceiling windows, modernized signage and plenty of space for airline check-in counters.

Kansas City’s current airport terminal was designed in a pre-9/11 era when you could pull up at the curb and essentially walk onto the plane.

The introduction of TSA screening made the airport considerably less efficient as most departure areas were no longer connected airside.

The new terminal centralizes the security checkpoints to one single location. There are currently 14 checkpoints spread across the existing airport, and the new terminal will feature 16 lanes on opening day, Meyer told a group of reporters.

The space can expand to accommodate 18 lanes if demand warrants, and Meyer told TPG that visitors can “expect Clear lanes to be here on opening day.” The airport is currently in negotiations with Clear to bring this expedited security program to Kansas City.

After you clear security, you’ll be located airside and can walk to any of the terminal’s 39 gates.

The first things you’ll likely notice are the tall ceilings and plethora of natural light. It became immediately clear that the passenger experience will be getting a big upgrade once the new terminal opens.

Concourse A North will be home to American Airlines and Alaska Airlines, both members of the Oneworld alliance. Concourse A South will house JetBlue, Air Canada, Allegiant Air and some other carriers.

Meanwhile, Delta Air Lines, Southwest Airlines and United Airlines will call Concourse B their home. Concourse assignments are subject to change in the coming months.

Bridging the two concourses is a 635-foot connector that’ll be lined with moving walkways. Meyer told TPG that it will take no more than seven minutes to get from the curb to the farthest gate in the B concourse.

This concourse connector boasts fantastic views of the apron and airfield in the distance; it’ll likely become a favorite for aviation enthusiasts passing through the airport.

Concourse B also features a centralized amenity area before turning into a north and south pier of gates.

In this central area, you’ll find a new City Market food hall that’s designed to resemble its namesake location in downtown Kansas City. The airport’s first lounge — an 11,000-square-foot Delta Sky Club — will be built in this area on the upper level above the main departures concourse.

Though the club is still under construction, it’s poised to boast some of the best views from the terminal.

Flyers can expect a plethora of never-before-seen amenities at the Kansas City Airport. This includes two information desks in each of the two central retail nodes, along with a meditation room, conference room and pet relief areas.

The gate areas are much more spacious than before. On average, they’ll seat 125 passengers, a nearly 70% increase from the existing ones in the old terminal.

As airlines deploy larger planes to Kansas City, there’ll be more seating space than ever before. Each seat will feature easy access to power outlets and USB ports.

Southwest’s Kansas City station manager, Dan Brownlee, joined the tour and offered some remarks about his excitement for the new terminal.

Though he didn’t comment on the future of the carrier’s local operations, he did tease that “the larger hold room areas allow for a lot more connectivity and just a lot more passenger traffic into and out of the area.”

Every terminal facility — including the check-in, ticketing and gate counters — is designed in compliance with the Americans with Disabilities Act.

While the gate areas are still a work in progress, TPG got a tour of one of the all-glass passenger boarding bridges.

The Kansas City Airport authorities are especially proud of their choice to go with these types of jet bridges, saying that passengers won’t feel claustrophobic when they’re boarding planes. Plus, these American-manufactured jet bridges feature HVAC capabilities both for the bridges themselves and for the aircraft parked at the gate.

Speaking of gates, Meyer was eager to explain the purposeful numbering sequence that he and the team designed for the new terminal.

For one, each gate will be designated by a letter and number, with the former corresponding to either the A or B concourse.

The airport even saved some numbers for a possible future expansion of Concourse A South.

One of the last pieces of construction work will be the airport’s 28 art installations commissioned specifically for the new terminal.

Once complete, the artwork will undoubtedly give the terminal an even more impressive look.

There are plenty of restrooms throughout the new terminal, which all feature a green/red light system to indicate if a stall is occupied.

There’ll be a mix of all-gender and gender-specific facilities, and all stall doors open outward — a purposeful design choice on the airport’s part.

In terms of concessions, Lovell Holloway, a general manager from Vantage Airport Group, was excited to announce that all 50 dining and shopping outlets will be open from day one. Roughly 80% of the concessions will be from brands local to the Kansas City region, including Pigwich and Parisi Coffee.

The airport negotiated that prices will be pegged to local stores within the vicinity of the airport, subject to a 15% markup.

The arrival experience in Kansas City will be completely overhauled with the new terminal.

Gone are the days of baggage claim sharing the same level as the departure area. Instead, there’s a centralized escalator and elevator bank located near the main Concourse A retail node that leads to a lower level, where you’ll find seven baggage claims.

From there, you’ll exit the airport by heading out to the arrivals curb or the 6,100-spot parking garage.

International arrivals will park at Concourse A South, which is home to a new federal inspection station. There’ll be one baggage claim and a Customs and Border Protection facility waiting on the arrivals level just steps from the plane.

This area spills out into the main arrivals hall after clearing customs.

The new Kansas City Airport is poised to bring some major upgrades to the passenger journey.

Travelers will enjoy a centralized check-in and security experience, which will then funnel into modernized areas with plenty of retail, food and relaxation options.

When you land, you’ll walk to a dedicated arrivals level, which features much larger baggage claims and a separate curb to ease the traffic congestion that’s sometimes present in the existing facility.

Of course, all these upgrades come at the expense of the prior airport design's convenience — it used to require just a few steps to reach the gate.

That said, many flyers are sure to appreciate the modernized facility, which brings plenty of enhancements to the end-to-end travel journey. It will turn the Kansas City Airport into a true 21st-century transportation hub.