The world's largest bounce house and planning ahead for theme park holidays: This month in family travel news

Articles
Tarah Chieffi is a family travel writer for TPG. Whether she’s sharing tips for planning the perfect theme park trip or finding a kid-friendly hotel, her goal with every story she writes is to inspire families to get out and explore the world.
Follow
June 30, 2022
•
8 min read 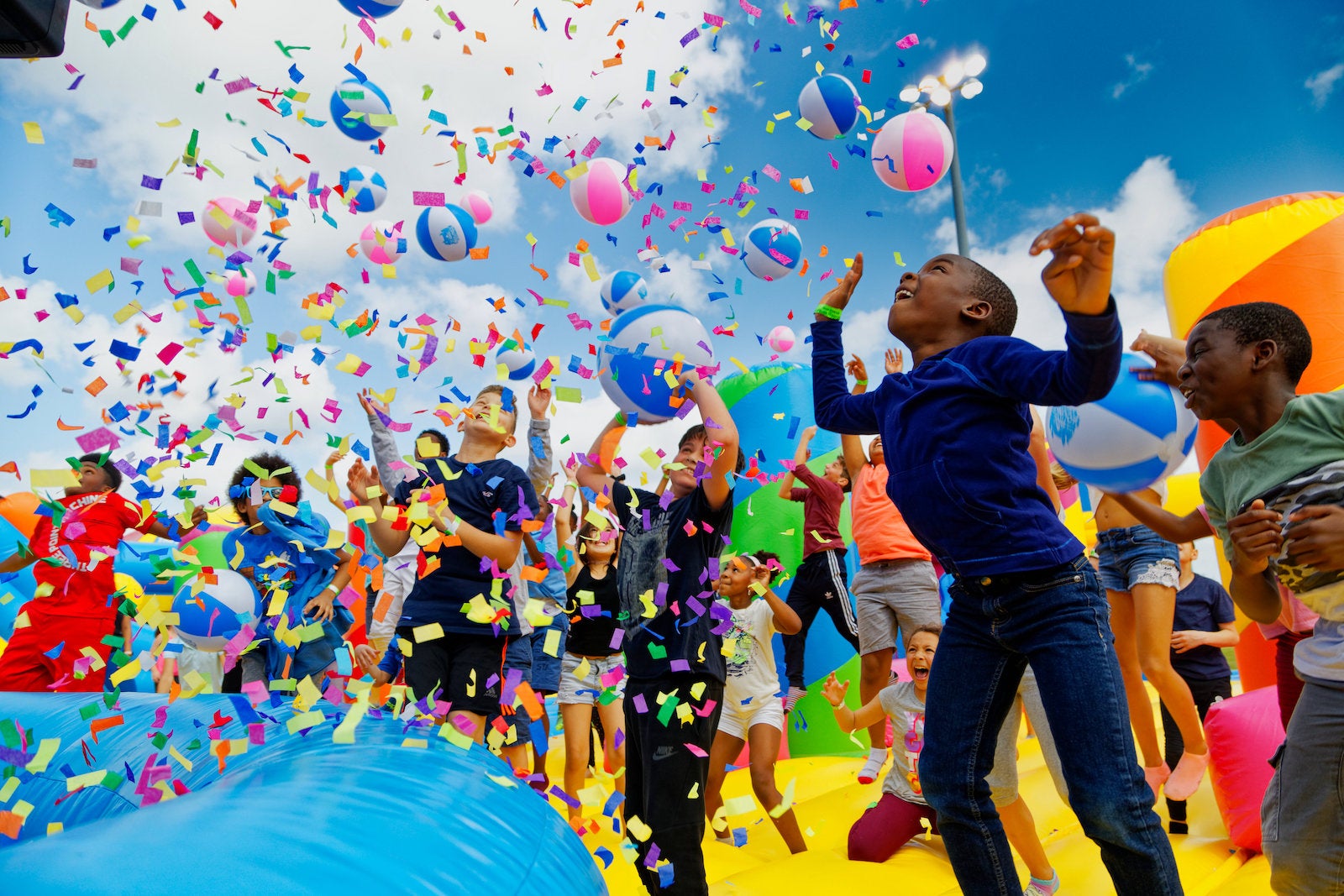 There aren't many things in this world I love more than a well-themed experience.

From clever design touches that turn an otherwise vanilla hotel stay into one you tell your friends about to elaborate theme park lands that teleport you into another world entirely, there are so many creative ways to keep the kids engaged and entertained this summer.

And, as TPG's family travel writer, something I love almost as much is sharing those experiences with you.

Unfortunately, there isn't enough time in the day to cover every bit of hotel, theme park or other family-friendly travel news that drops from the sky, but I'm trying my best and this new monthly family travel roundup is going to help me get there.

Each month, I'll bring you the latest and greatest (along with the weirdest and most wondrous) family travel news to help you make the most of your upcoming adventures.

This month, we're taking a look at theme park Halloween and holiday celebrations (they will be here before you know it), how you can visit the world's largest bounce house and more.

Sign up for the free daily TPG newsletter for more travel news and tips.

As Shanghai is reaching the end of a strict two-month COVID-19 lockdown, restrictions are easing and shuttered businesses are once again reopening. Among those is Shanghai Disneyland, though not all areas of the resort will reopen immediately and guests will need to follow certain safety protocols.

Related: Shanghai for families: What to know before you go

The park initially closed in early 2020, but reopened in May of the same year. It then closed again briefly in 2021 with tens of thousands of guests inside the gates when a single case of COVID-19 was detected inside the park. And, after reopening a few days later, it closed again in March 2022.

On June 30, the park will reopen to guests once again, with tickets going on sale June 29. Safety measures will be in place upon reopening, including limited capacity, temperature screenings, mask requirements, social distancing and presentation of health documents in accordance with current Shanghai guidelines.

There's a new way to save on your Disney World vacation

There aren't many ways to bring down the cost of a Disney World vacation (though we do know of a few), especially now that you have to pony up for offerings like airport transportation since the complimentary Disney Magical Express buses are no longer in service.

There are still ways to get from Orlando International Airport (MCO) to Disney World and back again, including the Sunshine Flyer. The Sunshine Flyer took to the roads of Orlando in December 2021, transporting guests in buses themed to 1920s train cars.

The standard round-trip cost is $34 for adults and $25 for children, but during the Sunshine Flyer summer sale, kids ride free on all tickets booked between now and July 31. Adult tickets are also on sale for $32 per person round-trip. Travel dates can be anytime in the future.

Universal Pictures' "Minions: The Rise of Gru" hits theaters on July 1, and the tiny, yellow creatures are taking over the Universal Studios parks in Orlando and Los Angeles.

At Universal Studios Hollywood, guests can meet costumed Minions outside of the Despicable Me Minion Mayhem ride, including Otto, a character from the new film (through July 17). Guests can also interact with a 16-foot-tall (!!!) Minion squishy and play a new Minion-themed game (through Aug. 14) during their time at the park.

At Universal Studios Florida, guests will find various Minion-themed photo spots around the park, along with character meet-and-greets, yellow-hued Minion treats and more.

For many years, Lego sets had a maximum age limit of 99. Most people assume they removed that upper limit to promote the idea that anyone can play with Lego bricks, but I think it's because Lego is getting up there in age and will soon be too old to play with its own toys.

Lego is celebrating its 90th birthday this year and Legoland New York Resort is throwing a brick-tastic party all summer long.

Between now and Aug. 19, children who visit Legoland New York Resort will receive a limited-edition lanyard. Each week 90 randomly chosen lanyards will have a card inside with surprises like free park tickets, annual passes, VIP experiences, Lego sets, treats and even an all-inclusive Legoland Hotel stay.

Whether or not you come up a winner, all guests can pose for a photo with Legoland's 20-foot-tall birthday cake, made from more than 180,000 Lego bricks. You can't eat this cake, but everyone knows apple fries are the best snack at Legoland, anyway.

I know we are technically only about a week into the summer season, but if you are considering visiting Disney World or Disneyland for Halloween or during the holiday season, you need to start planning now.

Mickey's Not-So-Scary Halloween Party kicks off on Aug. 12 and tickets are already on sale. As of right now, all dates including Halloween night are still available, but this event has been known to sell out in the past.

Oogie Boogie Bash at Disney California Adventure is going to be the tougher ticket to get. Last year, tickets completely sold out a couple of weeks before the first night of the event. Tickets for this year's party go on sale June 30 and I'd plan to snatch them up ASAP if you hope to attend.

Not to be outshone by ghosts and goblins, Santa is following behind hot on Halloween's tails.

Mickey's Very Merry Christmas Party is returning this year for the first time since 2019. The event officially begins on Nov. 8, but you'll see holiday decorations going up as soon as the last Halloween party ends. Tickets for this after-hours event go on sale July 7.

There is no similar after-hours event at Disneyland, but that doesn't mean things don't get festive. Disneyland Park and Disney California Adventure will have decor, treats and entertainment, including nighttime spectaculars at both parks. Official event dates have not yet been released.

As much as I love a good bounce house, I'm sometimes reluctant to jump in if it is already full of small kids. I think I've finally found a bounce house big enough to accommodate jumpers of all ages. Reader, meet Big Bounce America.

Big Bounce America is a massive inflatable theme park of sorts, with four different inflatable experiences, including a bounce house certified by Guinness as "The World's Biggest Bounce House."

The event is hitting the road this summer, with stops in St. Louis, Chicago, New York City, Denver and more.

Tickets include timed access to the aforementioned 16,000-square-foot bounce house and all-day access to a sports-themed bounce arena, an inflatable obstacle course and a space-themed bounce house. Sessions are available for various age groups, including adults-only sessions, and start at $19 per person.

Featured image by (Photo courtesy of The Big Bounce America)
Editorial disclaimer: Opinions expressed here are the author’s alone, not those of any bank, credit card issuer, airline or hotel chain, and have not been reviewed, approved or otherwise endorsed by any of these entities.