Disney's 'fanciest hotel', the Grand Floridian, grand once more with new rooms — here's how to book

Articles
Summer Hull , aka Mommy Points, ran the Mommy Points site for families who want to travel more for less using miles and points for seven years. She now heads up a variety of special projects at TPG when she isn't exploring the world with her own two girls.
Follow
June 23, 2022
•
9 min read 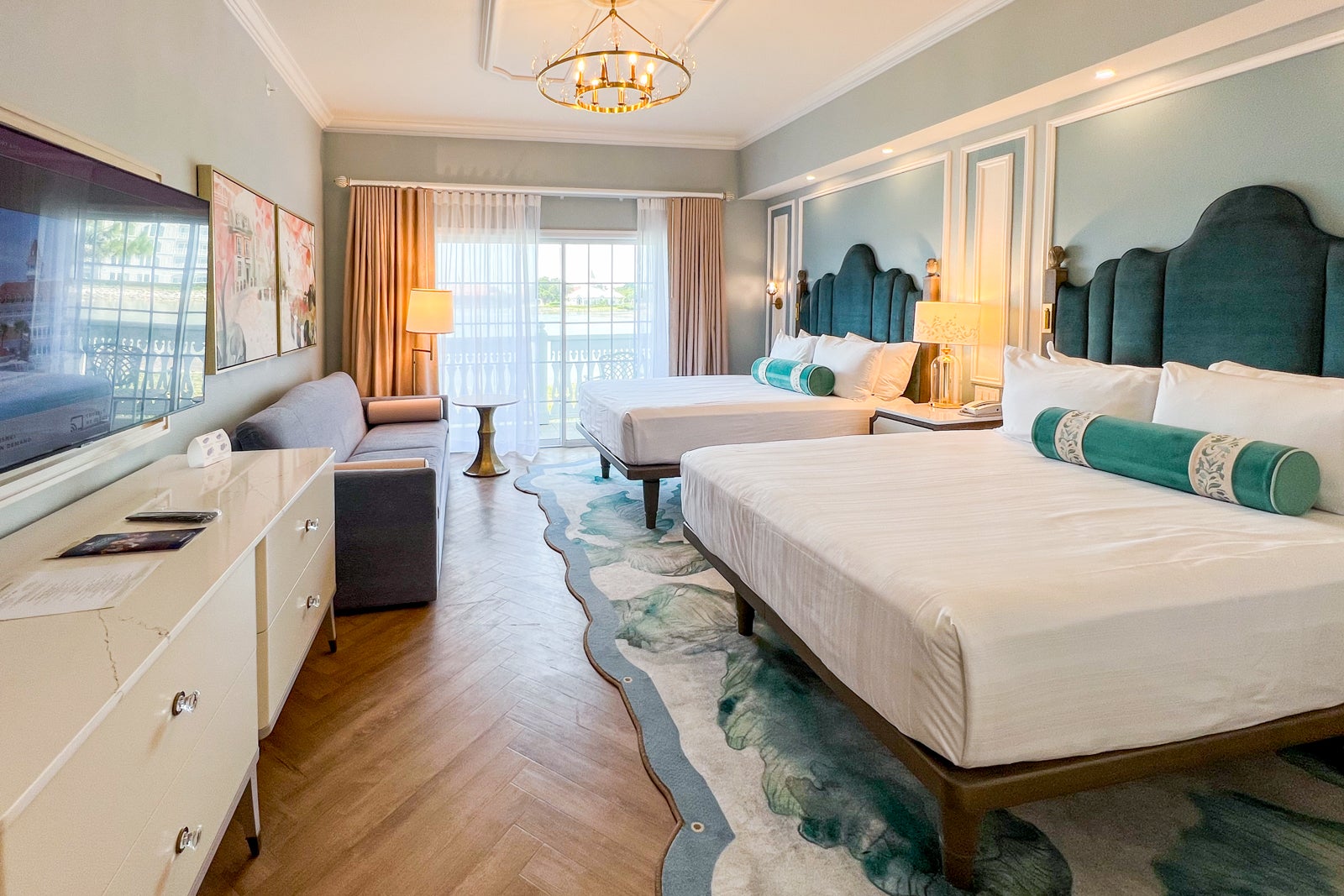 Editor’s note: Disney World provided the room for this first-look media stay. All opinions are the author's and were not reviewed by Disney.

It's a big day at Walt Disney World as the House of Mouse has debuted some brand-new, fancy rooms at one of its most famous properties. And, after a first look, I can say they appear to be absolutely fabulous.

Disney's Grand Floridian Resort & Spa is not only a crown jewel in the Disney World lineup of resorts in terms of being one of the most expensive and well-appointed options, but also one of the most visually recognizable properties.

Just about every kid who has been to Walt Disney World since the property opened right next to the Magic Kingdom in 1988 has spotted the sprawling resort with its Victorian-era design, white exterior and red roof.

Disney must have agreed — and it did something a little differently this time with 200 of the rooms.

Instead of just getting some new furniture and flooring, Disney took some existing space in the Grand Floridian's Big Pine Key building, otherwise known as Building 9, and converted all of the existing Grand Floridian hotel rooms in that building into 200 all-new Disney Vacation Club resort studio rooms.

These brand-new studios sleep up to five and look very modern and posh, but in a way that blends with the resort's timeless aesthetic. Here's what you need to know about the brand-new Disney Grand Floridian resort studio rooms.

You'll find "Mary Poppins"-inspired touches throughout the room, which makes sense given that it's housed in the Victorian-styled resort. The touches are easy to spot but, if you aren't looking for them, they also blend into the color palette of golds, greens, blues and pinks set against the wood-tone flooring in an on-trend herringbone pattern.

A Walt Disney Imagineer at the media preview event told me that the inspiration for the style of the new rooms was to bring the gardens of the Grand Floridian into the studios.

It's pretty clear that they accomplished that goal with the use of jewel-toned floral touches that often conceal a bit of "Mary Poppins" whimsy.

For example, the green pillows below not only bring in the greenery of the outside, but they have a nod to the penguins from "Mary Poppins" that also adorn the Disney Vacation Club lobby fountain.

My favorite touch in the room is unquestionably the chandelier flanked by some clear, glass birds.

If you look closely, you'll notice ... one bird is different. Think of it as a "Hidden Mickey," penguin-style. (But yes, the room is also home to some Hidden Mickeys, so happy hunting. I won't completely spoil the surprise.)

Related: These are the best suites at Disney World

Enough about style — what about function?

There is a variety of room and suite sizes at the Grand Floridian, but the new resort studio rooms are all the same: two queen beds and a sofa daybed.

This makes them a potential option for families of up to four or five people, as long as one is small enough for a daybed.

Unlike the DVC studios at the Polynesian Village Resort, this studio's bathroom is not a split design, but it is certainly spacious enough for a few folks to get ready at once. There is a large vanity consisting of two sinks and a tub-shower combo that is great for those with kiddos not old enough for a shower.

For prep and planning purposes, note that the tub and shower are in the same part of the bathroom in these room types.

Also note that unlike in many other DVC studios, you won't find a full kitchen in this room, though there is a minifridge and microwave. It's far more like a hotel room in design than the traditional DVC room. This is likely not a problem if you like to eat out and enjoy the best restaurants at Disney World on your trips, but it may be a drawback if you like to order groceries and cook some basic items in your room.

Only the 200 Grand Floridian DVC resort studios have this all-new look and design, but the other DVC rooms are also refreshed.

We got to take a peek at a larger suite and it has a similar color scheme to the new rooms, but not in the same totally new way.

If you stay in a different DVC room type at the Grand Floridian, you can expect these rooms to have just had their seven-year refresh, but think of that more as some Botox rather than a total face-lift. Those larger overhauls of Disney resort rooms are on a 14-year cycle.

So far we have been talking about the Disney Vacation Club rooms at the Grand Floridian — and not technically the traditional hotel rooms.

Logic would state that those hotel rooms (and perhaps even some additional hotel common areas) are up next for a new look. I was unable to get any specific, hard answers from Disney other than references to "expanding magic" and similar.

All that said, I would expect work to turn to other areas of the Grand Floridian in the relatively near term, but if you book a standard hotel room right now, don't go in expecting this new look.

As a refresher, here's what the hotel rooms look like based off of two stays I had here in 2021.

Related: Things to know about the Grand Floridian at Disney World

For the price, they really aren't as grand as they could be. Hopefully, that changes soon, but for now, go in with appropriate expectations for those non-updated room types.

How to book a new Grand Floridian resort studio room

These 200 new resort studios are Disney Vacation Club rooms, but as we've covered before, you don't have to be a DVC owner to stay in a DVC room.

First, you can rent points from an owner — either on a 1:1 basis via an individual or through a larger company like David's Vacation Club Rentals. Studio rooms at the Grand Floridian start at 16 points per night and it's common for DVC points to rent close to $20 per point these days. Frankly, getting these studios for anywhere close to that rate could be a great deal compared to cash rates.

Here's a guide on how to rent DVC points to stay here or wherever you like at Disney World, and potentially save some real money in the process.

But you don't have to own or rent DVC points to stay in the new Grand Floridian resort studios — you can also book directly with Disney like you would for regular hotel rooms.

The two tricks here are to make sure you are booking this exact room type and to note that availability is limited.

In my spot checks, I'm seeing availability for the new resort studios both very close-in to the travel date and many months in advance. Rates seem to start around $700 per night, which is usually about the same as the standard hotel rooms at this resort. If given the chance with the same pricing, I'd certainly pick the new rooms.

To be sure you get the right room type (and have someone help with all the other intricacies of a modern-day trip to Disney), I'd recommend booking via a free Disney vacation planner, such as TPG's partner, Mouse Counselors.

Related: What it's like to go to Disney World right now

The new resort studios at Disney's Grand Floridian are beautiful, functional and modern in every way.

There are outlets everywhere, the styling is lovely and it's a room that lives up to the Grand Floridian name in a way the other rooms are struggling to do.

If you get to stay here in a new room, you're in for a treat both when you get to take the monorail directly to Magic Kingdom and when you have a fresh space to return to at the end of a long park day.

Related stories
Chasing American Airlines elite status? Here are 14 ways to earn Loyalty Points
Fly to Greece from multiple US cities for less than $700
American Airlines restores free 24-hour hold option
Holiday airfare is rising: What to know if you haven’t booked yet
Featured image by (Photo by Summer Hull/The Points Guy)
Editorial disclaimer: Opinions expressed here are the author’s alone, not those of any bank, credit card issuer, airline or hotel chain, and have not been reviewed, approved or otherwise endorsed by any of these entities.