Articles
Summer Hull , aka Mommy Points, ran the Mommy Points site for families who want to travel more for less using miles and points for seven years. She now heads up a variety of special projects at TPG when she isn't exploring the world with her own two girls.
Follow
Aug. 24, 2021
•
9 min read 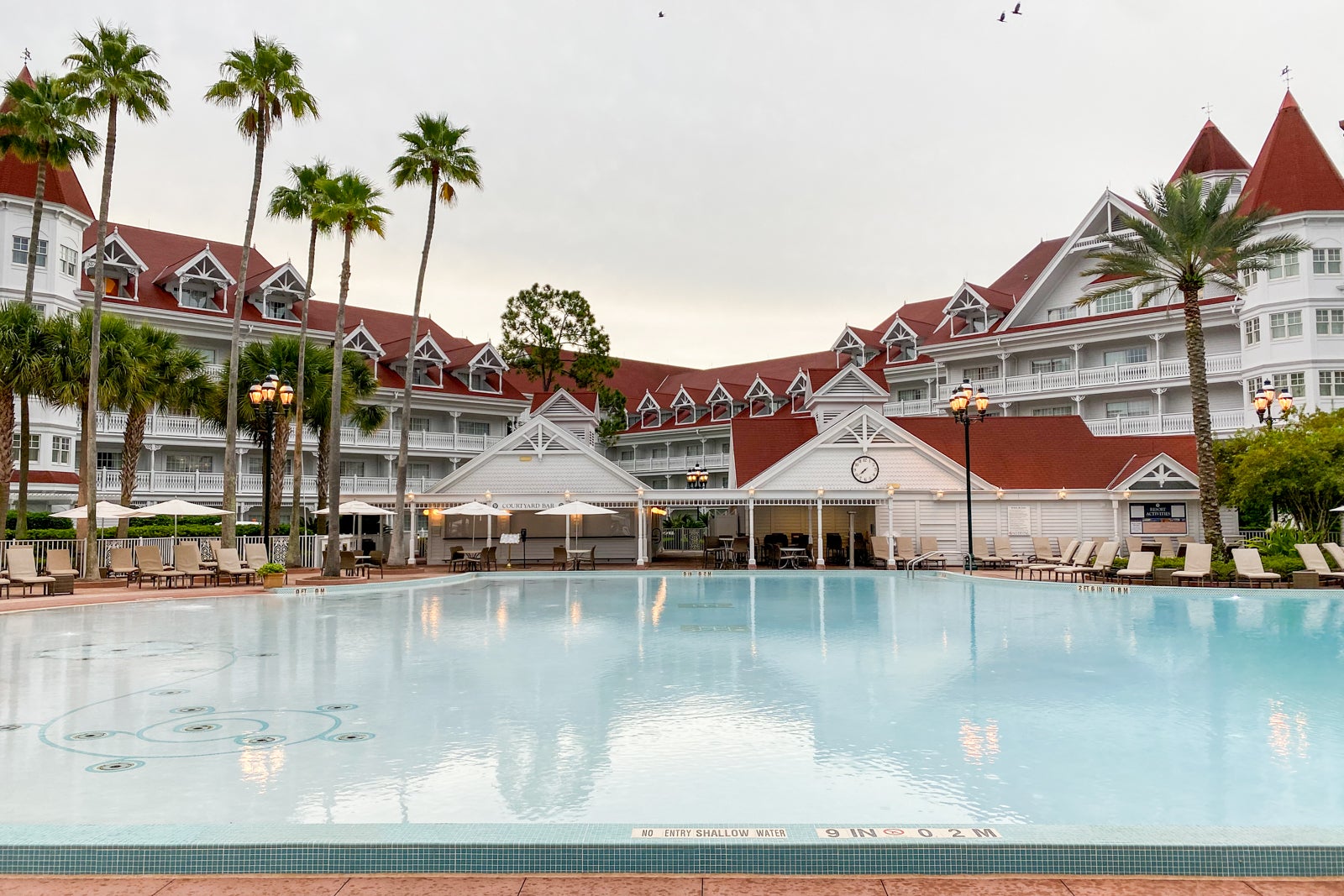 Editor’s note: I have stayed at the Grand Floridian on multiple press trips that were hosted by Disney World. In keeping with TPG editorial policy, this is not a formal review of the property since I have not stayed on a regular paid rate. All thoughts shared are my own to help you decide if this is the right spot for you.

When you think of the grandest, most opulent, iconic, crème de la crème of Disney World resorts, there's a good chance that images of the Grand Floridian Resort and Spa dance through your head. This resort exudes a Disneyized-version of turn-of-the-century Victorian charm that leans into the use of light colors, stained glass, chandeliers, marble, high ceilings, a cage elevator and even live piano music.

It's fancy without being too stuffy or intimidating. You'll see bathing suit-clad kids squealing through the sweeping lobby more frequently than you'll see suits and jackets walk by -- though you'll likely catch a glimpse of those, too.

There could be some healthy debate over whether the Grand Floridian is still the grandest of Disney resorts, but it unquestionably played a major role in transitioning Disney into an era of rapid resort expansion when it opened in 1988 as the first new resort to be added at Walt Disney World since 1971. If Disney's Contemporary has a connection to the Magic Kingdom's Tomorrowland and Disney's Polynesian Village Resort enjoys influences from Adventureland, then the Grand Floridian seems to fit best with the Main Street U.S.A. straightlaced and upbeat theme and era.

Even now, 33 years after it first opened, the bones of the Grand Floridian resort have held up exceptionally well.

The white paint and red roof exterior look just as timeless as the beachside resorts like the Hotel del Coronado in San Diego that likely helped to inspire it.

And there's no denying that its spot on the Seven Seas Lagoon, just a stroll or short monorail ride away from the Magic Kingdom, is some of the best real estate in all of Disney World.

But before you spend $600 or more per night to book a room at this deluxe Disney Resort, here are six things you should know about the Grand Floridian so you can decide if it is the right Disney resort for you.

One of the closest resorts to the Magic Kingdom

Depending on your strolling speed, expect this walk to take 10 - 15 minutes. Note that in the heat of the day or during a rain shower, there isn't a ton of shade or other covering on this walk. But you do get the added benefit of watching a monorail zoom by overhead.

Speaking of, if you want to save those steps, you can board the monorail from the lobby of the Grand Floridian and take it directly to the Magic Kingdom. As with all monorail resorts, this means you clear security when boarding the monorail at the resort so you're ready for the fun as soon as you arrive at the park.

FOR NO-COST ASSISTANCE WITH PLANNING AND BOOKING YOUR NEXT DISNEY VACATION, CHECK OUT TPG'S DISNEY BOOKING PARTNER, MOUSE COUNSELORS.

This is a large and spread out resort

The Grand Floridian isn't the biggest resort at Disney World as some are over 200 acres large with over 2,000 rooms, but at 40 acres in size and well over 800 rooms, it's still quite large by most standards.

At Grand Floridian, there are rooms in the five-story lobby that are club-level rooms (when that service officially reopens in mid-Sept. 2021). Then there are also five other buildings that house the hotel rooms at the Grand Floridian: Sago Cay, Sugarloaf, Conch Key, Boca Chica and Big Pine Key.

On top of that, there are the Disney Vacation Club Villas at Disney's Grand Floridian that have their own building on the opposite side of the main beach pool.

Related: How to rent Disney Vacation Club points and save money on your Disney vacation

On top of the hundreds of hotel rooms, here is also where you'll find a convention center, wedding pavilion, two pools (one with a waterslide) and a splash pad with a water play area.

Needless to say, if you are staying here with a group, you could end up being quite spread apart if you aren't careful with room requests, types and selections. Personally, I like Sago Cay and Sugarloaf for relatively close proximity to the main lobby, restaurants and dock, but those locations also lessen the walk to the Magic Kingdom.

Rooms are the biggest, and most expensive

Standard rooms are the Grand Floridian are the largest standard hotel rooms at Walt Disney World at around 440 square feet. But the bad news is that this resort is also pretty consistently one of the most expensive options.

Outside of a sale, these days it's quite common that standard outer building rooms at Grand Floridian go for $600 to $700 per night. Those with a theme park view are often in the $800 to $1,000 per night range and club-level rooms in the main building are often $1,000+ per night.

These prices are a big part of why I still haven't actually stayed here yet on a paid stay or actual vacation.

Related: These are the best Disney World resort hotels

There are many high-end restaurants and amenities

Those who pay the big wallet rates to stay at the Grand Floridian have easy access to some of the most high-end restaurants and activities at Disney World. Not all of these have yet reopened, but during times of normal operations, there is where you find the dinner-jackets-required, AAA Five Diamond Award-winning Victoria & Albert's Restaurant where kids under 10 are not allowed.

You'll also find Bibbidi Bobbidi Boutique for those princess and pirate transformations and the Senses Spa, along with multiple restaurants and lounges such as 1900 Park Fare, Citricios, Narcoossee's, Enchanted Rose lounge and more.

When compared to the food hall-only type of options available at the Disney Value Resorts, this is a ton of non-park entertainment available without leaving your resort.

It's been a while since it was renovated

Since this isn't a true full review, I'm trying to lean way more on facts more than my own decor-related opinions.

So, I'll frame this as a fact -- it's been years since this resort was renovated. I've read that Grand Floridian rooms were refreshed in 2015, which doesn't sound all that long ago, but many Disney resorts have opened or been renovated since that time and provide a more modern design, a larger number of outlets and have done away with the carpets, heavy drapery and large furniture.

I've spent a decent amount of cash to stay at Disney resorts such as the Riviera Resort that opened in 2019, the amazing Copper Creek Cabins and I won't hesitate to do the same to check out the just-renovated Polynesian Village resort rooms as soon as I can.

But as much as I love Disney, I haven't been able to bring myself to spend $600+ of my own dollars per night on rooms that ... have to be approaching the top of Disney's next-to-renovate list.

One of the five outer buildings currently being utilized for hotel rooms, Big Pine Key, will be transformed into 200 Disney Vacation Club resort studios that will accommodate up to five guests each with a projected opening date of summer 2022.

While we don't know exactly what those studios will look like, it's pretty safe to assume that, once completed, those rooms will offer a fresh look for those looking to stay at the Grand Floridian. Who knows -- maybe they will kick off a larger renovation project for the resort.

Related: Is this now the nicest suite in all of Disney World?

The Grand Floridian is unquestionably a can't-miss part of what makes Disney World special.

You can feel like a Disney princess walking up its lobby staircase, buy a gingerbread shingle to nibble on next to the over-the-top gingerbread house displays that adorn the lobby around the holidays and sit on the sofa listening to live piano music fill the lobby. This resort can serve as a perfect contrast to the hustle and bustle inside the parks (though it does get busy when the holiday decor is up, as shown from 2019).

Being just a short walk or monorail ride from the Magic Kingdom cements the deal that the Grand Floridian is indeed a top-notch resort option at Disney World.

But while I absolutely think everyone should visit this resort for a drink, nice meal, afternoon tea when that returns or to enjoy the holiday decorations, whether or not it's the best place for you to stay on a trip to Disney World really depends on your budget, tastes and priorities.

Related stories
Another major cruise line to sharply hike onboard fees
Save money with these travel-related offers on your credit cards this month
Use these shopping portal bonuses to earn extra miles this holiday season
Using miles and points to book airline tickets and hotels for others
Featured image by (Photo by Summer Hull/The Points Guy)
Editorial disclaimer: Opinions expressed here are the author’s alone, not those of any bank, credit card issuer, airline or hotel chain, and have not been reviewed, approved or otherwise endorsed by any of these entities.