The best places to see Fourth of July fireworks

Articles
Tarah Chieffi is a family travel writer for TPG. Whether she’s sharing tips for planning the perfect theme park trip or finding a kid-friendly hotel, her goal with every story she writes is to inspire families to get out and explore the world.
Follow
June 27, 2022
•
9 min read 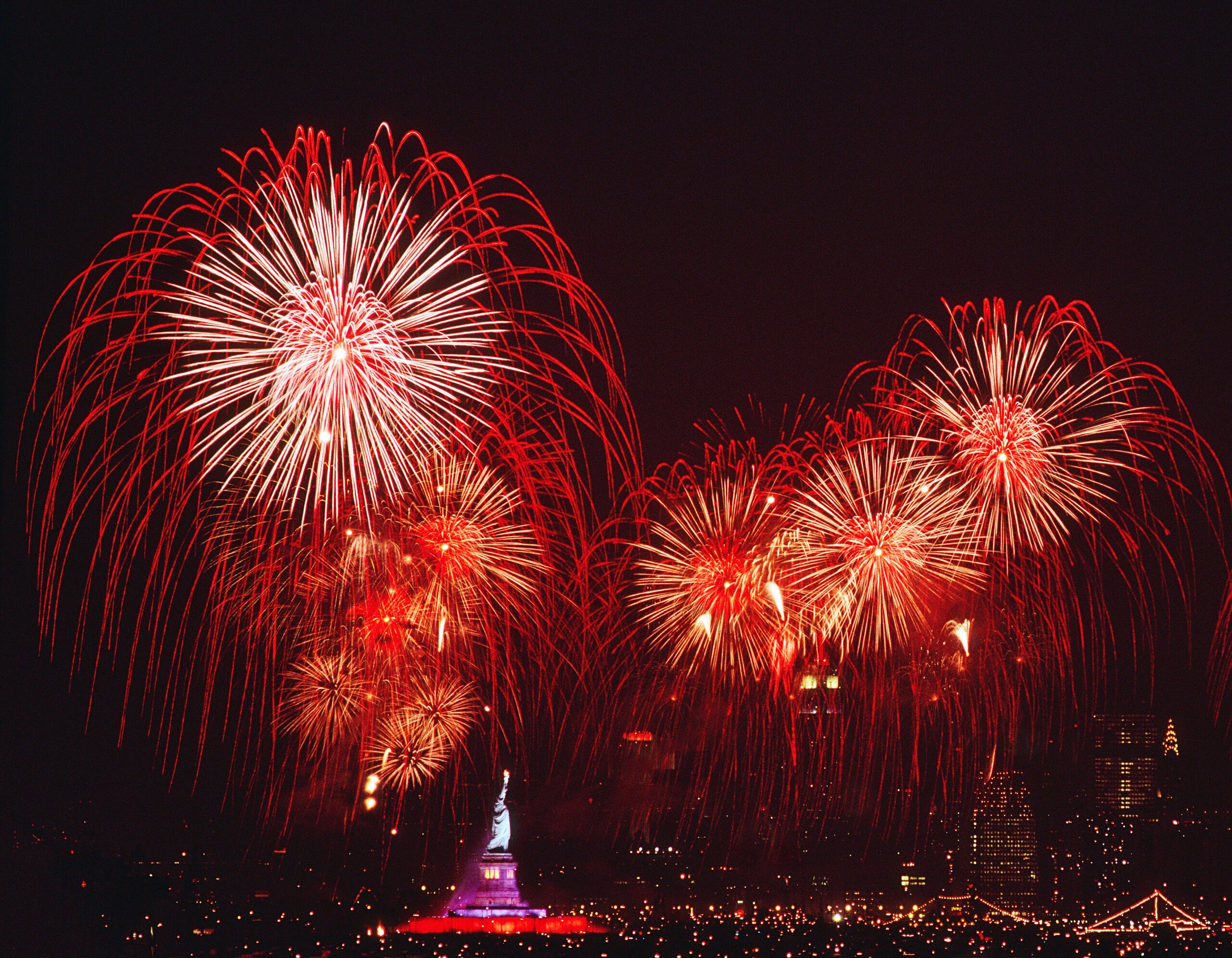 It's time to break out your best red, white and blue duds ... and maybe some earplugs.

America's birthday is upon us and cities across the USA are celebrating with patriotic pyrotechnic parties that will light up the night sky.

There's nothing wrong with backyard sparklers and poppers, but if you want to see the country's biggest, brightest and most spectacular fireworks displays, we've rounded them up for your viewing pleasure.

New Orleans' musical roots run deep, so it only makes sense that the city likens its "Go 4th on the River" July 4 fireworks spectacular to a dueling piano show. The fireworks are shot from two adjacent barges stationed on the Mississippi River for a unique back-and-forth effect.

Find a viewing spot in Crescent Park so you can watch the pre-fireworks concerts or reserve a special Independence Day riverboat cruise on the Creole Queen or Steamboat Natchez.

Related: 10 TPG-approved hotels for your next New Orleans stay

The Boston Pops Fireworks Spectacular is returning to its home at the historic Hatch Memorial Shell on the Charles River Esplanade after a two-year pandemic hiatus.

The fireworks at this free event are backed by a lineup of patriotic tunes performed by the Boston Pops orchestra and culminate with a powerful rendition of Tchaikovsky's 1812 Overture while canons fire in the background and hundreds of fireworks illuminate the sky.

Since 1981, St. Louis has marked the Fourth of July by throwing "America's Biggest Birthday Party." This year, there is a full weekend of festivities including live music, a parade, local food and service-member recognition ceremonies.

Framed by the iconic Gateway Arch on the banks of the Mississippi River, this year's fireworks display is reputed to be the largest to date, with nearly 30 minutes of colorful explosions in the sky.

It wouldn't be a Music City Fourth of July celebration without live music — and Nashville's "Let Freedom Sing!" event will have plenty of it, along with the largest fireworks show in Nashville history.

Related: 10 cool Nashville hotels to consider for your next trip to Music City

The event starts with performances by bands like Old Dominion and Cassadee Pope and ends with a bang as the Nashville Symphony plays a live performance synchronized to fireworks.

Event admission is free, but VIP packages are available for purchase.

This year is the 46th annual showing of Macy's 4th of July Fireworks celebration and it's celebrating by going bigger than ever, with thousands of fireworks set to a rousing mix of patriotic and popular music.

Related: Book this, not that: New York City hotels edition

There are various viewing spots along the East River, but you'll need to arrive early if you want a good spot. Some locations may close to additional guests once they fill up.

If you can't make it in person, you can see the show live on NBC or streaming on Peacock.

Denver is celebrating Independence Eve with a gathering at downtown's Civic Center Park. The event beings at 5 p.m. with local music, food trucks and a performance by the Colorado Symphony.

The fireworks will blast off from the roof of the City and County Building across the street from the park.

There aren't many places more appropriate to celebrate our nation's independence than in our nation's capital. Washington D.C.'s independence day fireworks display takes place on the National Mall, surrounded by memorials and monuments that honor important moments and individuals in American history.

The fireworks are launched from either side of the Lincoln Memorial Reflecting Pool and guests can access the National Mall from various points for the best viewing spots.

The event is free to the public, but you can purchase special event tickets to watch the show from the San Diego Midway Aircraft Museum, the Maritime Museum of San Diego or aboard a dinner cruise.

You can also purchase tickets to see Kool & the Gang at Jacobs Park. The show is scheduled to end just in time for the fireworks.

Like the meringue to a slice of key lime pie, Key West's Fourth of July fireworks show is the perfect way to top off five days of fruity fun at the annual Key Lime Festival.

The fireworks take to the sky from Edward B. Knight Pier, but you can party at the pier from the afternoon on with live music, food and more. The fireworks are also viewable from Smathers Beach, which is a bit further away, but may be less crowded.

There's much more to Houston's "Freedom Over Texas" celebration than just fireworks. The festivities start at 4 p.m. with family activities and live music, headlined by a Houston-area native, country singer and songwriter Clay Walker.

The event takes place at Eleanor Tinsley and Sam Houston parks on the banks of the Buffalo Bayou. Admission is $10 per person and kids 5 and under are free.

This year, two multi-talented actors, comedians and musicians — Steve Martin and Martin Short — are joining the Los Angeles Philharmonic at the Hollywood Bowl for three nights of music, fireworks and probably more than a few laughs.

Tickets start at $79 per person and kids 12 and under receive a 50% discount.

From Memorial Day weekend through Labor Day, the Tropicana Atlantic City will launch fireworks from the beachfront across from the hotel. With Independence Day landing on a Monday this year, the venue is adding a showing for America's birthday. The fireworks should be visible all along the beach and boardwalk areas.

Santa Claus, Indiana's Holiday World theme park has an entire land dedicated to the Fourth of July where you can celebrate Independence Day every single day on rides like Eagles Flight and the Firecracker.

The park's all-new-for-2022 Holidays in the Sky drone and fireworks show pays homage to all holidays — and for Independence Day the park is adding even more fireworks to the show. Guests can also pick up a pair of free, 3D fireworks glasses and a character mask ($.99) to see the show in a whole new light.

Admission to the fireworks show is included with park tickets, which start at $59.99 per person (kids 3 and under are free).

The Rose Bowl may be best known for its annual New Year's Rose Parade and Rose Bowl Game, but the stadium's annual AmericaFest Celebration is another of its long-running traditions.

This year marks the event's 96th year and guests will be treated to a motocross show, musical performances and a stunning fireworks display.

Tickets start at $20 per person and children 5 and under are free for general admission (2 and under for reserved admission).

Benjamin Franklin Parkway is the place to be if you are spending America's birthday in America's birthplace. Philadelphia is throwing an all-day street party with music by artists including Jason Derulo and Ava Maxon, games, food trucks, a kids' play area and fireworks to top it all off.

The event is the culmination of the 16-day Wawa Welcome America festival that celebrates Juneteenth, Independence Day and all of the diverse ways Americans experience liberty.

No matter where you are, there's a good chance you could open your front door on July 4th and see (or at least hear) fireworks. But if you want to go big, these are the biggest, brightest displays in the country.