Articles
Brian Kelly is the founder and GM of The Points Guy (TPG), the preeminent voice when it comes to loyalty programs, credit cards and travel.
July 06, 2020
•
10 min read 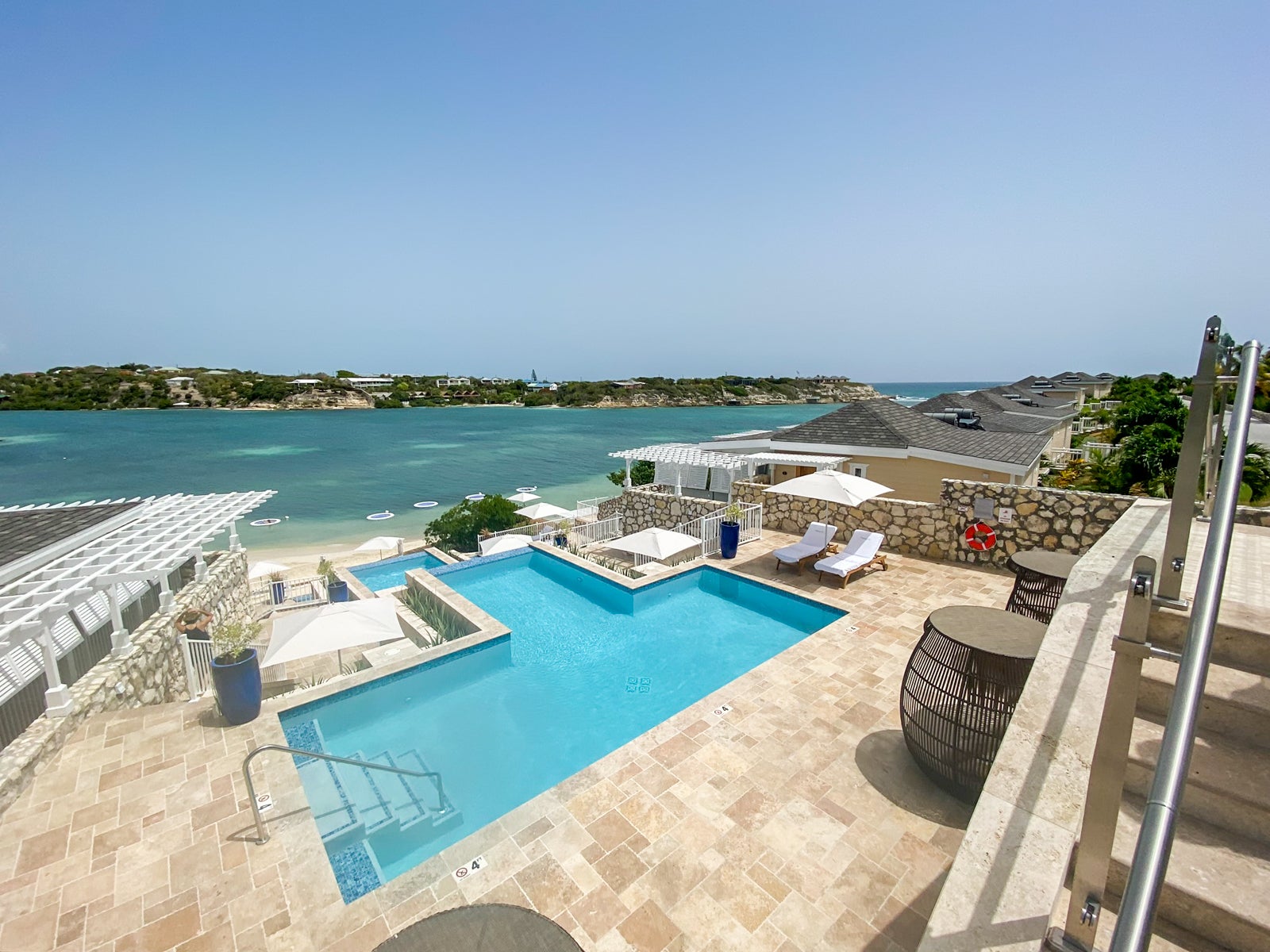 When I initially heard Antigua would be opening up for American tourists in early June, I immediately wanted to go.

I hadn't been out of the country for several months, and I thought this would be a great opportunity to visit a country I'd never been to before, while also getting an idea of what travel will be like in a world with an unrelenting pandemic.

With coronavirus cases still spiking in the United States -- causing the European Union to block American tourists from visiting the continent for now -- and no sign that COVID-19 is going to go away any time soon, I believe we have to figure out a way to live with this disease and travel responsibly and safely while doing so.

New to The Points Guy? Sign up for our daily newsletter and check out our updated beginner’s guide.

I've received several positive antibody tests in the last few weeks, so I may have had COVID-19 earlier in the year.

Of course, I followed all of the recommendations from health officials both in the U.S. and in Antigua once I arrived, which include wearing face masks in public, sanitizing and washing my hands frequently and practicing social distancing.

Having just returned from the trip with a friend earlier this week, I'm pleased to say it was a success, and if this trip was any indication of the future, I believe we can get to a place where travel can occur safely and responsibly and in a way that keeps the risk of spreading COVID-19 to others at a minimum.

Related: How to minimize risk on your summer vacation

Booking my trip to Antigua

Right now, American Airlines is the only airline connecting the U.S. with Antigua and Barbuda. JetBlue will resume its New York-JFK to Antigua (ANU) service later this month, but for now, AA's daily service from Miami (MIA) is the only option, and what I flew for my weekend getaway.

When I began my hotel search, there were a few important considerations. I learned that the best scuba diving is on the south side of the island, which ruled out Hodges Bay Resort and Spa on the north side. Jumby Bay, likely the top resort on the island, remains closed until the fall, so that was also out. There's a Sandals resort, but it's too focused on couples and not exactly what I was looking for. And, unfortunately, there aren't any traditional points properties on the island.

That's when I settled on Hammock Cove Resort and Spa, on the east end of the island near a breathtaking area called Devil's Bridge where the Caribbean Sea meets the Atlantic Ocean.

Rates at Hammock Cove often go upwards of $1,200 per night, but for last weekend they were $685 per night. It's an all-inclusive property so all food and nonmotorized watersports were included in the rate. Since this isn't a traditional points property, I decided to book my stay through the Chase Travel Portal, where I redeemed a total of 136,906 points at a value of 1.5 cents per point.

After I made my reservation, I inquired with the hotel about an airport transfer, but they were unable to provide it due to the pandemic and told me I'd have to arrange one through a private company. I booked a round-trip transfer for two for $129 through Eagle Discovery Tours, and I'd recommend the company to anyone traveling to Antigua.

A driver was waiting for us at the airport and brought us in a private shuttle to the resort. There was a plastic barrier between the front and rear seats to minimize the risk of spreading germs and he wore a mask during our transfers.

My weekend at Hammock Cove

My flight from Miami landed in Antigua around 11 p.m., which meant we didn't arrive at Hammock Cove until around midnight.

Since it was so late when we arrived, there was just a skeleton crew working the check-in desks, but the process was smooth. Before we entered the building, our temperatures were taken and the hotel staff explained to us how the hotel was taking its pandemic procedures very seriously, and they would be strictly enforced.

Related: What your hotel stay will look like after coronavirus

Masks had to be worn in common areas of the property and when walking between different areas. But once you arrived at the beach or pool or restaurants, they could be removed.

The staff sprayed our luggage with a disinfectant, so I recommend traveling with hard-sided luggage for the time being.

After we checked in, we were escorted to our room by a staff member. Inside, there were a couple of salmon sandwiches for us to eat. I really appreciated the gesture, but the sandwiches themselves gave me Fyre Festival vibes. Just some potato chips and soft drinks would have done the trick.

I wanted to stay at a resort that actually felt like a resort, with pools, a nice beach and a few restaurants in case I was required to stay on the property during my vacation.

Luckily, I didn't need to quarantine. The authorities in Antigua accepted the COVID test results we'd received the day before in Miami, and we were allowed to venture off property. The morning after we arrived, we even got to scuba dive!

Hammock Cove is just 30 minutes to V.C. Bird International Airport (ANU) and also about a half-hour away from English Harbour, where we went for our dive. It wasn't the best diving in the world, but it felt great to be doing it again.

The resort is very compact. You can walk the entirety of the property no problem.

I particularly loved the tiered pool, which was especially great for traveling during a pandemic because guests weren't fighting for chairs around the same large pool. And the loungers were mostly in separate nooks, perfect for social distancing.

The beach was great, too, and there were plenty of toys available to use, such as stand-up paddleboards (some even with pedals!) and large circular rafts for relaxing in the sun. We also got a ride on the resort's catamaran one afternoon from Julio, who managed the beach.

There are just 42 villas at Hammock Cove, and each is about 1,000 square feet, which is a great size.

The room was equipped with an air conditioning unit directly above the bed. This made it difficult to cool the room without the freezing cold air blowing directly on the bed, but just having that cold air was appreciated since it's so hot — day and night -- in Antigua in the summer.

The minibar was stocked with medium-size bottles of liquor, local beers and water bottles which were greatly appreciated after a day in the sun.

The room was nicely designed and even had a private plunge pool. It wasn't an over-the-top Maldives villa by any means, but it was comfortable and certainly a nice place to spend a few nights.

The food at Hammock Cove was a mixed bag.

In general, it seemed like everything was imported and "Americanized." For example, there were few fish dishes. At the resort's high-end restaurant, you could basically choose beef or pork — not exactly what I expected from a resort in the Caribbean. I did have a grouper dish once, but it was overcooked.

That being said, there were some dishes that I loved, like the shrimp Caesar salad and the truffle eggs and steak at breakfast.

The drinks were also excellent. Nothing says "Caribbean vacation" like a frozen Miami Vice by the pool!

Overall, I wasn't blown away by the food, but it was in line with what I would expect at an all-inclusive property, and it really was wonderful eating at a poolside restaurant — and not having to do the cooking.

The staff was consistently great at Hammock Cove. Like I mentioned above, Julio at the beach was fantastic and gave us a fun afternoon on the hotel's catamaran.

I got a massage at the spa one afternoon, which was also excellent. Marilyn, my massage therapist, was awesome.

And a visit to the spa felt overwhelmingly "normal." The only difference I noticed was that I had to sanitize my hands before entering, and Marilyn wore a face mask for the duration of the treatment.

Since most hotels are cutting back on housekeeping for now, I had to request (and pay an extra $20) for our room to be serviced, but I was happy to do so.

I really enjoyed my weekend at Hammock Cove in Antigua. Even though, on top of everything else, the Caribbean skies were clouded by a Saharan dust storm, my friend and I had a great time. The weather was still very good and we enjoyed every minute of our time at the pool and beach.

My flights and navigating the airport in Antigua was a breeze, and it's clear the country is taking its pandemic-prevention protocols very seriously.

I think I got a good value for my Chase points at Hammock Cove. I wouldn't have been happy to spend $1,200 or more per night there, but at under $700 per night for an all-inclusive resort, I was pleased.

We are going to have to embrace this "new normal" of travel, and if my weekend trip to Antigua is any indication, I think that if people make a concerted effort to follow the regulations of local health authorities, we will be able to do so responsibly and safely.