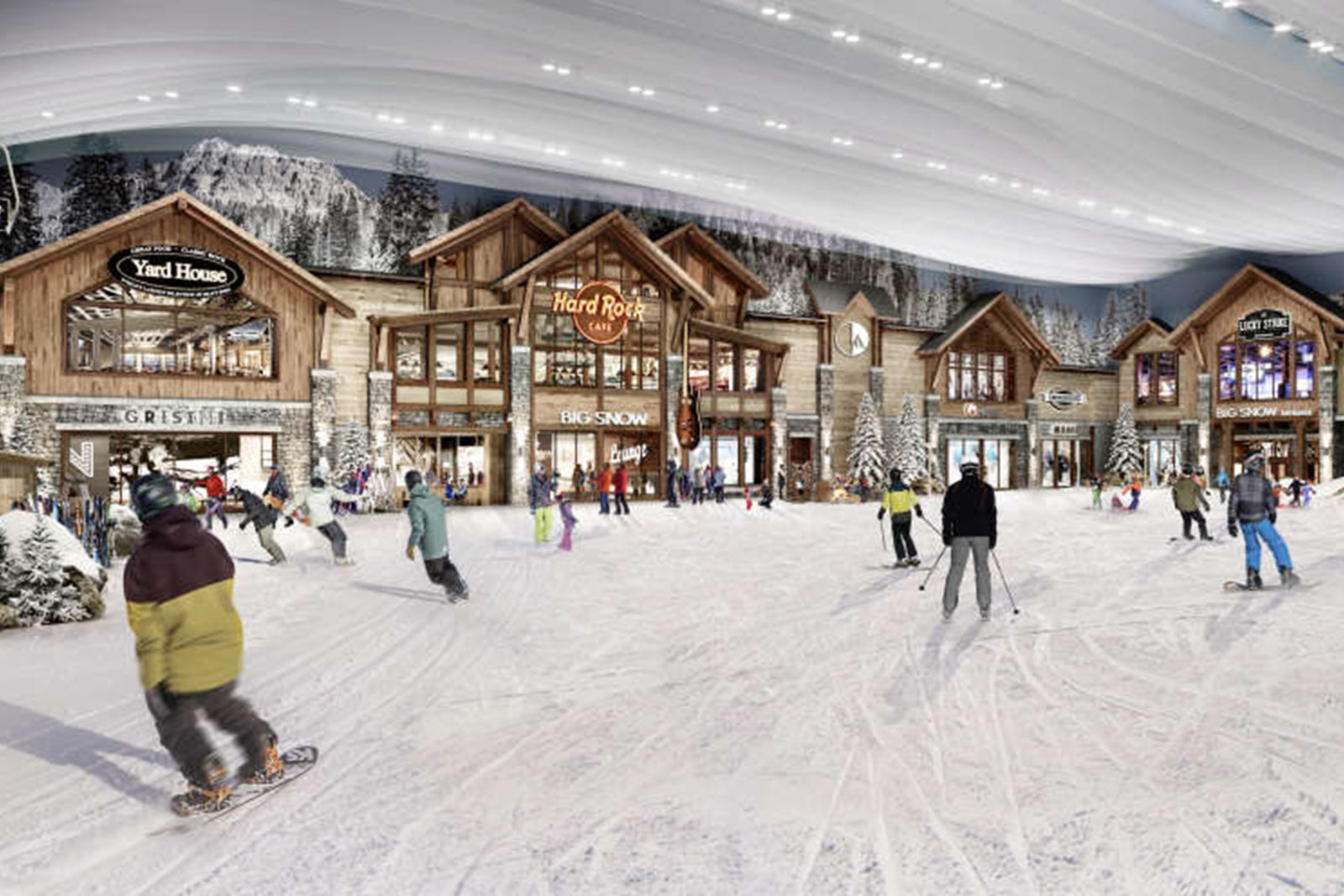 North America's first indoor ski resort just opened in a New Jersey mall
This post contains references to products from one or more of our advertisers. We may receive compensation when you click on links to those products. Terms apply to the offers listed on this page. For an explanation of our Advertising Policy, visit this page.

Ski season is officially here — and now, you can even hit the slopes inside a shopping mall in New Jersey.

On Dec. 5, the new American Dream mall in East Rutherford, New Jersey, opened North America’s first indoor ski resort. Called Big Snow America, it will be open 365 days a year — even during the hottest, most humid days of summer. The ski resort is just the beginning of the mall’s multiphase opening, which also included the debut of North America’s largest indoor theme park, Nickelodeon Universe, in October.

“Big Snow is a game changer for skiing and snowboarding in the United States,” Hugh Reynolds, vice president of marketing and sales for Snow Operating, said in a statement. "The unprecedented access to year-round snow combined with the center’s unrivaled location ... will allow us to provide opportunities never before seen, and to move the needle on growing the sports in a big way.”

For years, the sprawling American Dream mall was little more than a vacant eyesore along the Jersey Turnpike. It's 16 stories tall and stretches over 180,000 square feet, and now home to an après ski lounge and a 200-foot-wide ski slope.

While it isn’t the first of its kind in the world, similar attempts at indoor skiing in North America have made use of artificial revolving slopes. Big Snow, however, uses advanced technology to maintain a constant indoor temperature of 28 degrees, so they can make, groom and control actual snow.

What does that mean for skiers and snowboarders? None of that annoying freezing, thawing and refreezing so common on the East Coast that results in terrible, icy conditions outdoors. The snow can even be recycled, making the resort more energy efficient.

The lift-accessed terrain has a 160-foot vertical drop and runs that range from beginner to advanced, although expert skiers and riders likely won’t be extremely challenged by the 26-degree black diamond run (some of the steepest inbound runs in the U.S. exceed 50 degrees).

Still, the most avid skiers and riders will rejoice once they're able to scratch their mid-summer itch with a turn. There's even a terrain park — perfect for those hoping to hone their skills on the jumps and rails.

Related: The best credit cards to use on ski trips

As you might expect, the facility will largely cater to first-time and beginner skiers and riders. Snow Operating, which owns Big Snow and a number of outdoor ski resorts across the nation. including nearby Mountain Creek, is utilizing their Terrain Based Learning method. Features on parts of the slope help skiers and riders naturally control their speed, turns and body positioning.

First-time and infrequent skiers and snowboarders also know that lack of equipment and appropriate clothing can be a huge barrier to trying the sport. At traditional resorts, skis, snowboards, helmets and poles can usually be rented (for a hefty fee), but snow pants and jackets can't. Guests are forced to choose between purchasing potentially pricey snow gear, or taking to the slopes in unsuitable clothes. That alone can make skiing and snowboarding a potentially miserable experience.

That's another way Big Snow is great for beginners. Packages, which start at $49.99 when purchased online, include equipment rentals; snow pants and a jacket; a helmet; a two-hour lift ticket; and access to Terrain Based Learning and dedicated instructors.

One-on-one private lessons will also be available for $199.99 (for two hours). And for visitors who already have their own gear, a two-hour lift ticket will cost only $29.99 when purchased online: not bad when compared to the $200 day passes offered by some higher-end resorts.

Regardless of whether you're a veteran skier or rider, or a novice who hasn't had the time (or cash) to head to a major outdoor resort, Big Snow could be a great way to bring the great outdoors a little bit closer to the Big Apple. After all, you can now fit in a few turns as easily as you would spend a couple hours at the gym, regardless of the weather or time of year.

Related stories
Legislation that could gut credit card rewards set to move through Congress
Would you stay at 1 of these 8 haunted hotels this Halloween?
Southwest winter flash sale: Get one-way flights for as low as $29
You can currently buy points and miles with up to a 100% bonus — but should you?
Featured image by (Photo courtesy of American Dream)