US hotel occupancy rates are plunging due to coronavirus

Articles
Jennifer Yellin is a contributing writer to The Points Guy where she focuses on family travel. She is also the founder of Deals We Like where she helps her readers travel on a deal.
Follow
March 16, 2020
•
8 min read 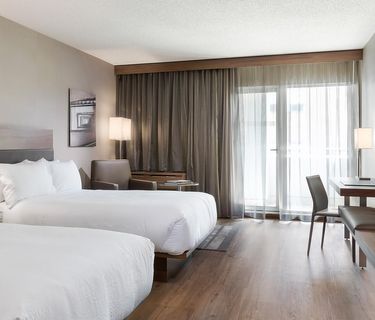 Last year was a good one for hotel brands.

According to a forecast released by CBRE Hotels Research in 2019, it was the 10th consecutive year in which U.S. hotel occupancy did not decline. And while CBRE's report indicated its data pointed to a slight reduction (-0.6%) in occupancy in 2020 and 2021, that data did not bake in the effects of the still-undiscovered novel coronavirus that would soon sweep across the globe.

Now that the World Health Organization (WHO) has declared coronavirus a pandemic, it's no surprise the threat of illness -- paired with school and business disruptions -- is keeping more people at home. The number of business and personal trips have been significantly reduced. These factors are not only hurting air travel but also heavily affecting occupancy rates at U.S. hotels.

Spring break is here for students in many parts of the country, yet many families are canceling their travel plans as major entertainment complexes like Disney World, Disneyland, Universal, Knott's Berry Farm and others announce temporary closures. Even some hotels, like the Great Wolf Lodge Resorts chain, have closed their properties entirely from March 15 to April 1.

Hotels, usually at full capacity right now, have seen demand dry up over the past few weeks.

US hotel occupancy by the numbers

STR, a company offering insights into the hospitality industry, provided TPG with data from the last few weeks; and their analysis matched what we're hearing. Occupancy rates are, in fact, lower — significantly lower — than the same period last year.

While comparing the first week of March in 2019 to 2020, STR measured three key performance metrics. All metrics showed a decline, much more than what the company normally sees year after year when comparing similar weeks.

Related: Coronavirus hotel change and cancellation policies: what to know

Analysts also looked specifically at airport hotel demand data week-over-week and their analysis continued to show a decline in occupancy rate. The graph below shows the demand starting at the beginning of February and going through the first week in March. As you can see, starting toward the beginning of March, demand started to decline drastically.

TPG also spoke to Sean Hennessey, a clinical assistant professor at the NYU School of Professional Studies Jonathan M. Tisch Center of Hospitality. He also supports the analysis put together by STR.

"We have seen drops in hotel revenues during the past week which are well beyond the trending levels," Hennessey said. "For example, New York revenues were down 20% last week, whereas they had been down 3% to 5% prior to that time. Also, many hotels in the New York market are reporting sizable jumps in cancellations for both individual reservations and group events."

Unfortunately, with travel bans in place, flights being canceled and people staying put, hotel occupancy rates will continue to decline. We've also seen many hotel lounges and restaurants closing simply due to a lack of demand.

Related: These are the hotels and airlines offering elite status extensions for those impacted by coronavirus

What's the outlook for the future?

It's too early to make predictions about how long coronavirus will negatively affect the U.S. hotel market. But, we can make some inferences about the industry's eventual rebound based on previous virus outbreaks, such as H1N1 in 2009 and SARS in 2003.

Before sharing data related to those outbreaks, however, we'd like to stress that these situations are not apples-to-apples comparisons to COVID-19. Neither H1N1 nor SARS impacted the U.S. as much as coronavirus is expected to. Also, while H1N1 did have an impact on U.S. hotel occupancy rates, the country was simultaneously recovering from the 2008 financial crash — so other factors were at play in addition to the virus.

Related: Can I cancel or change my award ticket due to coronavirus travel waivers?

But there's reason to be hopeful when reviewing the industry's recovery from both of these incidents that affected other countries, like Mexico and Thailand, far more than they did the U.S.

STR noted three main takeaways from the H1N1 and SARS crises. First and foremost, the situation will get much worse before it gets better. Remember last year's data from CBRE that we mentioned earlier, which predicted that domestic hotel occupancy would slip 0.6% in 2020? If the U.S. experiences similar slumps this year as Mexico and Thailand did after N1H1 and SARS, respectively, hotel occupancy could plummet a lot farther than predicted.

We only need to look at other countries where the threat of coronavirus arrived earlier than it did in the U.S. to see its negative effect on hotel occupancy. In an article in The Jakarta Post, the Indonesia Hotel and Restaurant Association secretary-general Maulana Yusran told reporter Anthony Iswara: "The country's overall occupancy rate had fallen below the regular low season average of 50 to 60% to 30 to 40% since the outbreak of the coronavirus in China in early January."

Clearly, coronavirus is having an impact on hotels around the globe.

Closer to home, Paul Sacco, the president of the Massachusetts Lodging Association, told Bisnow Boston last week that Boston hotels are already "experiencing as much as a 40% drop in occupancy.”

STR's second takeaway is that the impacts of H1N1 and SARS were "fairly short-lived." And, finally, demand began to rebound about six to nine months after the World Health Organization (WHO) warnings about the viruses.

With all that in mind, the faster the U.S. can flatten the curve of the spreading coronavirus outbreak, the faster we can expect hotel occupancy to begin ticking upward.

Related: How to ward off coronavirus in your hotel room

Plans to win back business

As we said, the coronavirus situation -- and therefore hotel occupancy -- will get worse before it gets better. But, hotels and destination visitors bureaus are already working on initiatives to get travelers back on the road as soon as you feel the time is right.

For example, according to Fox 10 Phoenix, the Arizona Office of Tourism has launched its "Unreal Spring Deals" campaign to promote discounts of up to 50% on hotels in the state during March -- a month that is normally the state's busiest in terms of visitors -- and beyond.

Despite the decrease in demand for hotel rooms, advertised rates are still relatively high for peak travel dates. In tourist destinations, we have not yet seen too many discounts to incentivize travelers to fill empty hotel rooms in the future when travel can resume as usual. But those deals will no doubt come. How much coronavirus hurts the hotel industry in the U.S. remains to be seen, though hopefully the industry is poised for a quick comeback.

Related stories
Flying Blue finally fixes its award search, making it easier to book award tickets
Newark's gorgeous new terminal just got delayed into 2023
The best credit cards for paying your cellphone bill
Why you should consider having both the personal and business Amex Platinum cards
Featured image by (Photo courtesy of AC Hotel Park City)