Articles
David Slotnick is a senior aviation business reporter at TPG. He covers anything and everything to do with the business of running an airline.
Follow
May 21, 2021
•
8 min read 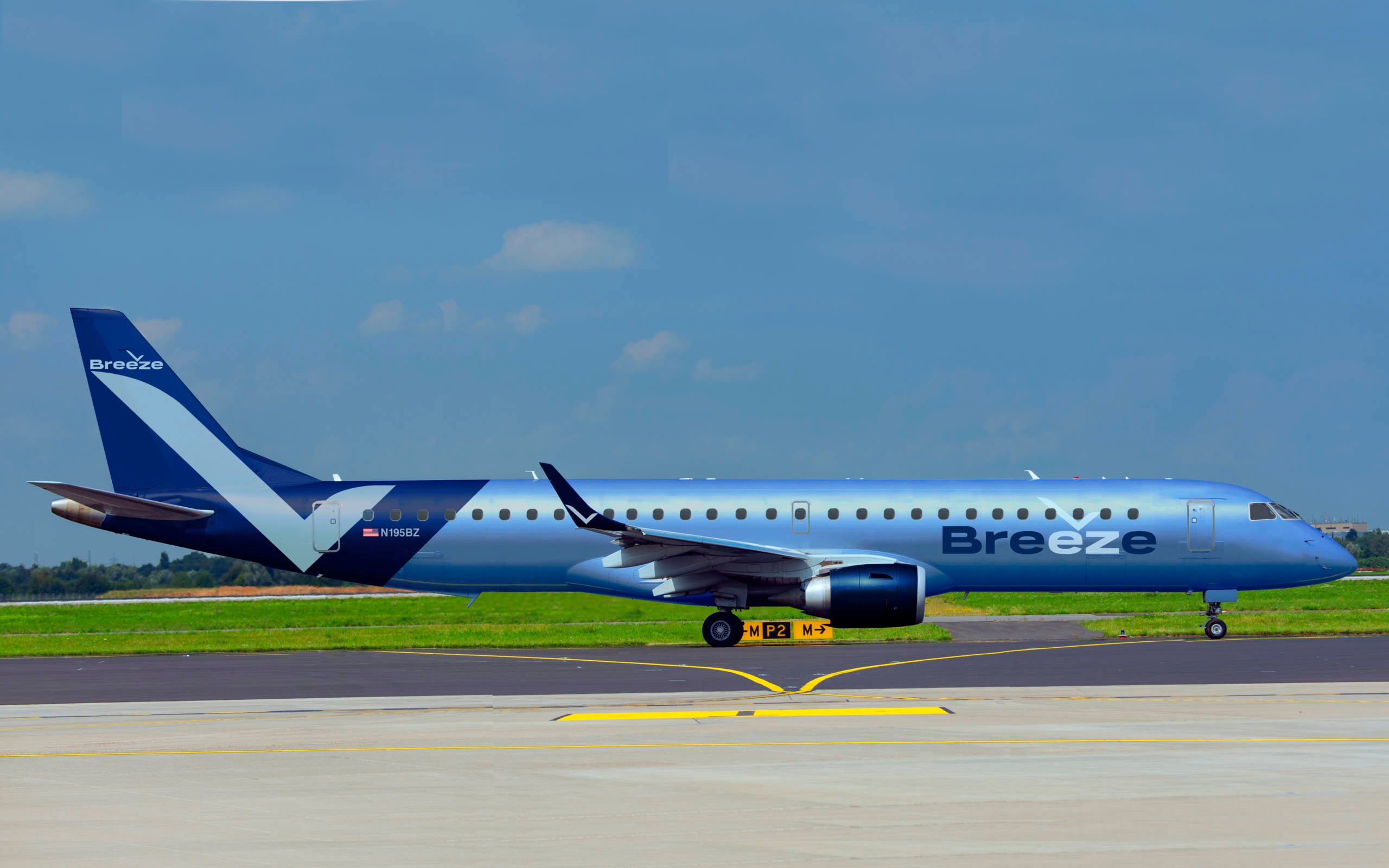 Breeze Airways, the latest venture from JetBlue founder David Neeleman, is poised to begin selling tickets and operating flights. The new airline received final approval from the Department of Transportation to open ticket sales on Friday, clearing it to become the second U.S. startup carrier to launch this year. The other, Avelo Airlines, debuted in April with 11 routes along the West Coast and soon followed with plans to expand in the East.

Although this may seem like an unusual time to start an airline, Breeze — which will begin flying just in time for the Memorial Day weekend — will be well-positioned to take advantage of the recovery in travel demand, Neeleman told TPG in an interview.

The carrier will focus on point-to-point routes between small, underserved cities. Eschewing hubs, and generally avoiding competition, Neeleman — who also founded Brazilian airline Azul and was previously a co-owner of TAP Portugal — plans to run a low-cost, nimble operation connecting city pairs that might not come top of mind. That means nonstop flights between places like Louisville and Norfolk, Virginia, rather than higher-profile routes like New York and Los Angeles. Perhaps not coincidentally, it's the same blueprint that's being used by the other startup, Avelo.

For Breeze, its launch is a bigger one, beginning with 39 routes, primarily from four focus cities: Tampa; New Orleans; Charleston, South Carolina; and Norfolk, Virginia.

In-depth interview: Neeleman says Breeze will use a ‘see how it goes’ approach to succeed. And business class — eventually

The airline plans to have a presence in a total of 16 cities, including the four focus cities. The others are Louisville; Tulsa; Bentonville/Fayetteville, Arkansas; Akron/Canton, Ohio; Columbus, Ohio; Huntsville, Alabama; Richmond, Virginia; Hartford, Connecticut; Pittsburgh; Providence; San Antonio; and Oklahoma City.

Breeze plans to reduce costs and expedite its launch by initially leasing 118-seat Embraer E195 jets from Azul, as well as 108-seat E190s from Nordic Aviation Capital. That means low capital costs to start. The airline is also in agreement to purchase 60 new Airbus A220-300 jets, which can hold up to 160 passengers. Neeleman said he expects the first delivery in October, with one delivery a month after that through the next few years.

More: Traveling soon? Here’s where you can quickly get a COVID-19 PCR test for travel

The A220s will feature in-flight entertainment and Wi-Fi. However, the Embraer jets will not have connectivity, Breeze said, citing the shorter flight times for those aircraft. They will, however, have streaming entertainment options.

Breeze received its formal “Certificate of Public Convenience and Necessity for Interstate Air Transportation,” from the Department of Transportation in March, which gave Breeze one year to begin flying passengers with up to 22 aircraft — although the airline can apply for permission to increase its fleet size at any time. The airline could not begin operations, however, until it received safety authorization from the FAA, and final approval to begin selling tickets.

New airlines must receive economic authority to begin operations from the DOT, as well as separate safety authority from the Federal Aviation Administration, before it can begin selling flights. The last of regulatory approvals that the carrier needed came through just this week.

The airline will be headquartered in Salt Lake City.

The first routes for Breeze Airways

The inaugural Breeze flight will be on Thursday, May 27, flying from Tampa to Charleston. The plane will continue on from Charleston to Hartford, before flying back the same way.

Here's a full list of routes that Breeze will launch, as well as start dates:

In addition to those routes from its focus cities, Breeze plans to fly standalone routes between:

Breeze fares will start as low as $39 at launch for one-way tickets, although it was not clear what normal fares would be.

Breeze will also launch with an in-house loyalty program.

“It’s going to be pretty simple,” Neeleman said. “You just earn credits, and you can use those credits on future flights.”

Passengers earn 2% “BreezePoints” on Nice fares, and 4% on Nicer fares. Points can be redeemed towards future flights or ancillary products, such as bag fees or on-board food.

At launch, Breeze will offer two fares aboard its Embraer jets: "Nice" and "Nicer."

Nice fares, the airline's hybrid of standard and basic economy, come with a standard seat without a seat assignment — all seats are in a 2-2 configuration — with 29 inches of pitch on the E-190 and 31 inches on the E-195. Nice passengers can bring a personal item — a full-size carry-on or checked bag will cost extra — and earn 2% BreezePoints.

Nicer fares come with an extra legroom seat — depending on the row, that's 33 to 39 inches of pitch on the E-190s, and 34 to 39 inches on the E-195s. Nicer fares include a full-size carry-on and a checked bag, a drink and snack, and earn 4% BreezePoints.

Seat assignments start at $10 each, although families traveling with children 12 and under can pick seats for free. Checked bags — and carry-on bags, for Nice fares — are $20 each, one-way, for up to three bags.

When Breeze starts flying the A220, the airline will introduce a third fare: Nicest.

Nicest fares will be the airline's business-class product. Initially, at least, the front cabin will have standard first-class recliners in a 2-2 configuration, although Neeleman said the airline could always upgrade to lie-flat seats if that makes sense down the road. Economy seats on the A220 will be in a 2-3 layout.

Featured image by A rendering of an Embraer E195 in the planned livery for start-up carrier Breeze Airways. (Image courtesy of Breeze Airways.)
Editorial disclaimer: Opinions expressed here are the author’s alone, not those of any bank, credit card issuer, airline or hotel chain, and have not been reviewed, approved or otherwise endorsed by any of these entities.