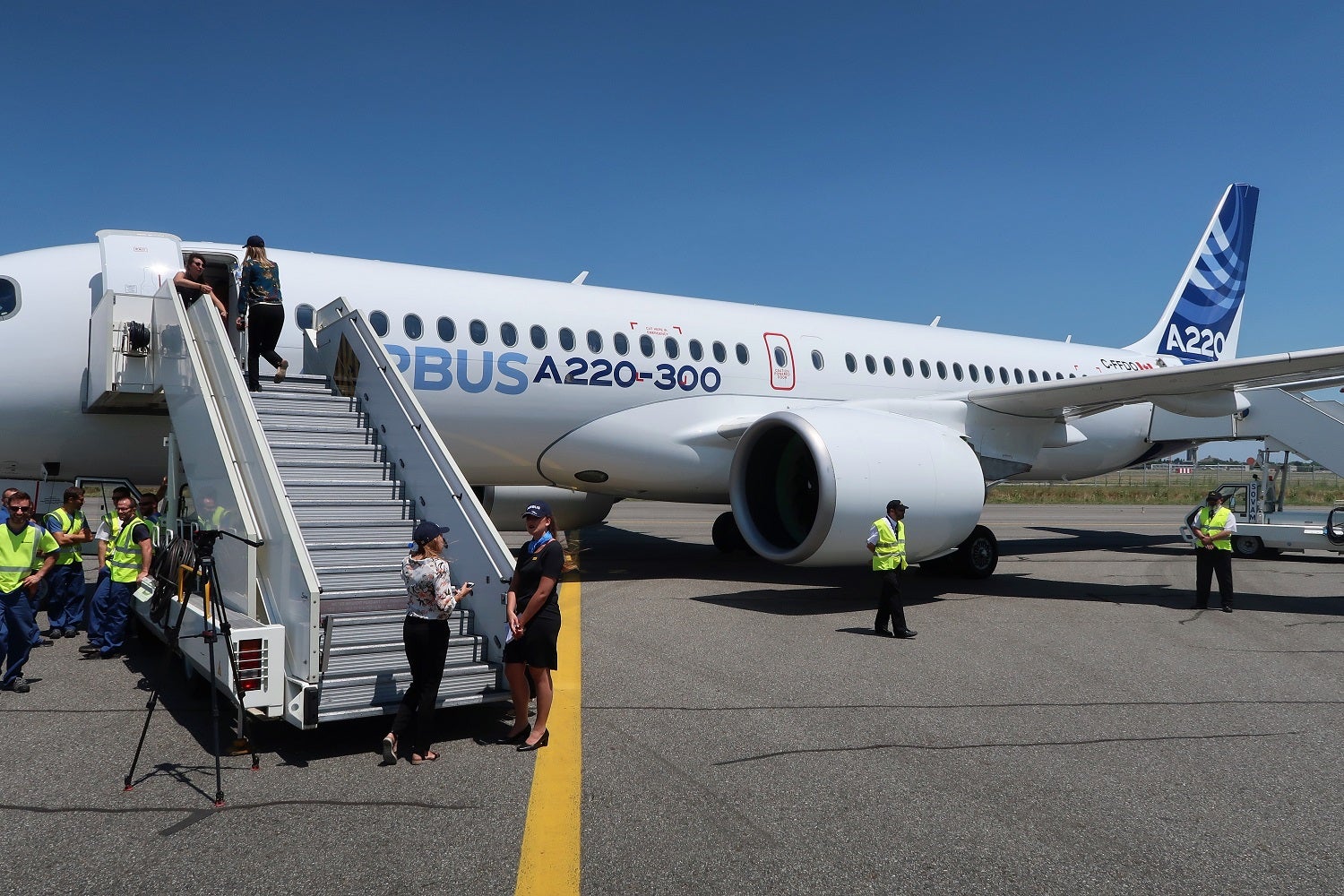 A Look Inside the First Airbus A220-300
This post contains references to products from one or more of our advertisers. We may receive compensation when you click on links to those products. Terms apply to the offers listed on this page. For an explanation of our Advertising Policy, visit this page.

Still, when the newly renamed A220-300 landed in Toulouse for a media event, I jumped on the chance to explore the inside of the aircraft.

The Airbus/Bombardier partnership chose an A220-300 for this special event. This aircraft, the larger version of the two-aircraft family, was the second CS300 ever produced, with MSN (Manufacturer's Serial Number) 55002. Despite Airbus' control over the program, the Airbus/Bombardier partnership will be based in Canada. So, it's still fitting for this aircraft's registration to be Canadian: C-FFDO.

As this aircraft is a test vehicle, there's a notice next to the main boarding door informing passengers and crew that "this aircraft is operating without a certificate of airworthiness."

As I rarely get the chance to "turn left" from the boarding door, I took advantage this time to check out the cockpit:

The C Series was not designed to be an Airbus, it only became one when the European company bought the program. But it looks like one on the flght deck, with a side-stick rather than the yoke you'd find on Boeing aircraft. That's the easiest way to tell Airbus cockpit from Boeings.

The Airbus A220-300 demonstrator isn't fitted with a business class. Instead, this high-density model seems designed to be shown off to airlines for short-haul operations. The bulkhead seats get extra legroom in this layout.

And, the overwing exit row also gets extra legroom:

One of the features that passengers like about the C Series aircraft is the seat width, especially for short-haul aircraft. Seats measure between 18 and 20 inches wide, depending on how the airline chooses to arrange them.

While the seats are wide, the pitch is set at just 30 inches in most arrangements. There's enough legroom for most passengers due to the slimline seats, but the thin cushioning led TPG contributor Lori Zaino to describe her experience as "sitting on a rock" during a six-hour flight on AirBaltic's CS300.

Another good passenger-experience aspect of the A220 is that its designed with enough overhead bin space to allow each passenger to carry on a rollaboard bag.

The only difference I could find between this A220 and the AirBaltic CS300 I explored in April — besides the new livery and the A220 headrest covers — was the lack of small overhead video screens. This was a feature that I'd assumed was built into each C Series aircraft, but perhaps is an optional accessory.

Besides the rare chance to check out the cockpit, this tour only confirmed one thing: Airbus seems to just be changing the name of the C Series to the A220, while leaving everything else as is. Considering the C Series has generally gotten positive reviews from passengers (except the hard seats) and airlines, for its reliability and operational performance, Airbus is wise to leave it as is.