Articles
Ben Mutzabaugh is the senior aviation editor and heads TPG’s airline coverage. Ben joined TPG in March 2019 after nearly 19 years at USA Today, where he launched the long-running, industry-leading Today in the Sky blog in 2002.
Follow
Nov. 17, 2020
•
9 min read 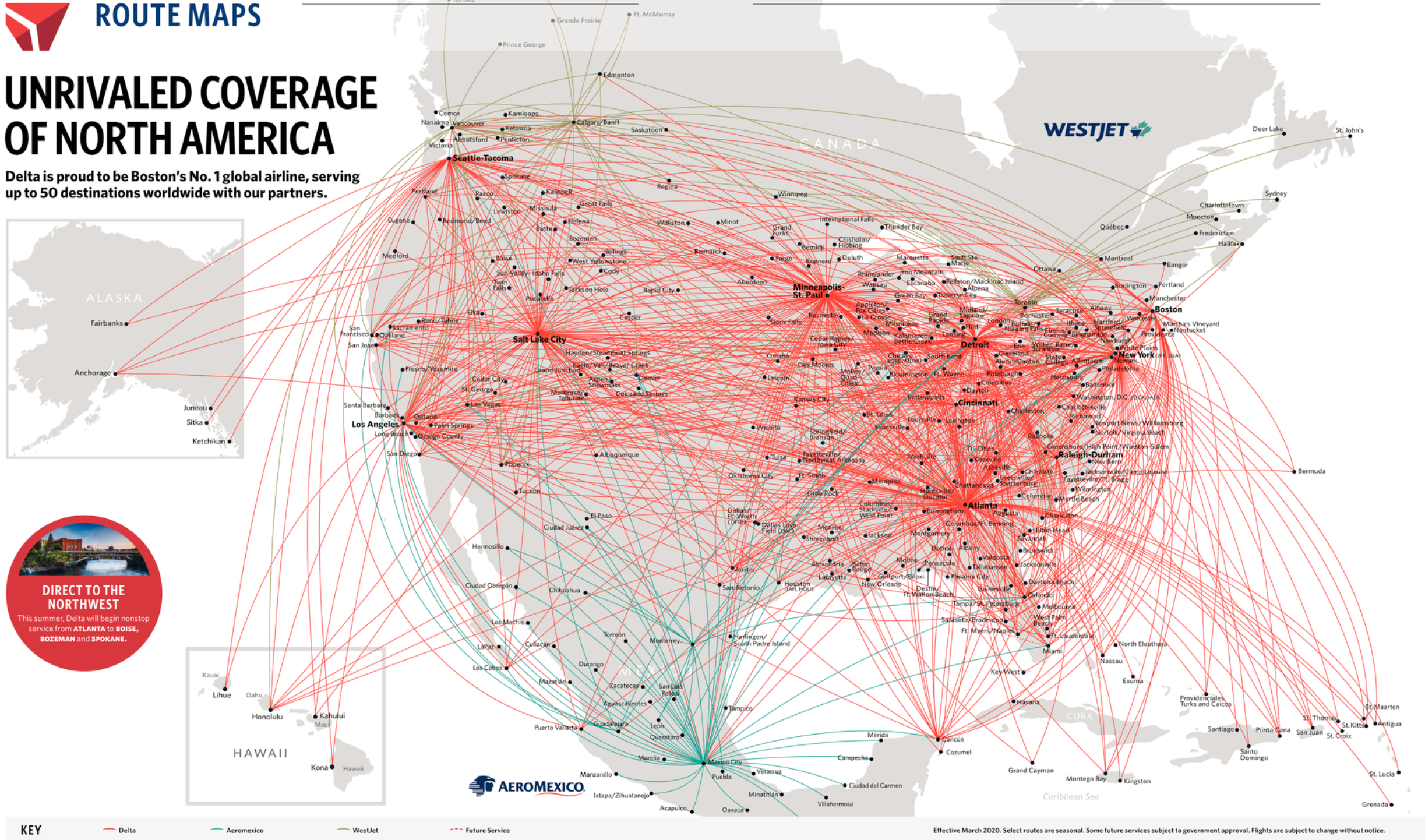 The coronavirus has upended nearly everything about the way airlines operate these days. But beyond service cuts, social distancing and new cabin cleaning protocols, the pandemic has also forced the airlines to rethink not only how they fly, but where they fly — with international routes slashed and domestic routes rejiggered.

Initially, airlines had little choice. By late April, the number of passengers being screened at U.S. airports dropped to just 4% of normal.

But, in the U.S., airlines found some breathing room by summer. Slowly, passengers numbers began trending up before plateauing in the fall at about 40% of what would have been "normal" in 2019. But it was enough for carriers to cautiously begin adding flights back to their schedules.

Cuts to international routes remained severe as most foreign destinations remain off-limits to Americans, so U.S. airlines looked instead to domestic destinations where travelers could visit and still social distance.

That trend is likely to continue into 2021, though airline decisions remain tied to the ebb and flow of COVID-19 outbreaks and how much longer the pandemic remains uncontrolled.

For now, travelers who are returning to the skies will find that the route map of their favorite airline may look a lot different than it did this time last year.

International is (mostly) out

International routes were among the first to go as the pandemic began to affect U.S. travel. And they’ll likely be the slowest to come back.

Travel restrictions remain in place around the globe, giving Americans few options to travel outside the United States. That’s clearly reflected in current flight schedules, where flights to overseas destinations remain just a fraction of what they were in 2019.

To see just how much international demand has dropped during the pandemic, look to American Airlines as an example. The carrier will be flying just two routes to Europe for most of December, connecting its biggest hub at Dallas/Fort Worth (DFW) to both London-Heathrow (LHR) and Frankfurt (FRA), according to Cirium.

There have been some bright spots, with the Mexican beach resort of Cancun a particular standout.

And there are glimmers of hope. Both United (from San Francisco) and American (from Seattle) intend to launch the first-ever service from the U.S. to Bangalore next year. Other routes — including United's planned Chicago-New Delhi service in December — also are set to launch in the coming months, though the pandemic has already played havoc with planned launches for several new routes.

More broadly, the overall outlook for international flights is dim at least into early 2021. It's likely that some discontinued international routes will return, especially if restrictions ease or if “travel bubbles” are introduced. Otherwise, hope for a larger-scale return international routes may hinge on the successful rollout of a vaccine.

With both international and corporate travel virtually nonexistent, U.S. airlines have had to look elsewhere to drum up business.

Their solution: Nature-oriented destinations with the built-in option to social distance outdoors.

Beach destinations – especially in Florida (more on that below) – have landed their share of new flights during the pandemic.

But perhaps the biggest winner is the California desert resort city of Palm Springs. It has landed so many new flights this winter that its December flight schedule will be down only slightly from the same period last year, according to data from Cirium.

More: Airlines are flying some unexpected routes during the pandemic. Will they stick around?

The biggest arrival is Southwest, which began flying from the airport this week with nonstop flights to Denver (DEN), Oakland (OAK) and Phoenix (PHX).

"We've not had anything this significant in a long time," Scott White, CEO of the Greater Palm Springs Convention and Visitors Bureau, said to the local Desert Sun newspaper. "This is a game changer for our destination."

To the desert ... : What pandemic? Palm Springs is booming with new flight, but is it sustainable?

... or the slopes: Colorado braces to wave of new winter flights as Americans flock to ‘snow and sun’ destinations

With business travel still largely at a standstill, these leisure routes could be key to accelerating a return to profitability for major airlines — though the exact timeline remains to be seen.

No hub? No problem

The “hub-and-spoke” system has long been a staple of the U.S. airline industry. But even this long-standing approach isn't sacrosanct as U.S. carriers try to find demand wherever it exists during the pandemic.

The most dramatic example might have come from United, which added 17 routes to Florida that bypass its hubs altogether. Those routes – including nonstop flights such as Cleveland-Fort Lauderdale and Pittsburgh-Fort Myers – were to operate for several months during the winter and spring schedule.

“The addition of these new flights represents United’s largest expansion of point-to-point, non-hub flying,” Ankit Gupta, vice president of domestic network planning at United said in announcing those routes, indicating they reflect a new approach during the pandemic “to add capacity where customers are telling us they want to go.”

JetBlue also is looking outside its main bases, saying this summer it would add numerous new point-to-point routes as part of a 30-route expansion. Among its new flights that don’t flow through its hubs are Newark-Austin; Chicago-O’Hare-West Palm Beach; and Philadelphia-San Juan, Puerto Rico.

Such non-hub flights would have been hard to imagine prior to the pandemic. But with passenger levels languishing, airlines are willing to add flights wherever the think there might be demand – even if it's outside their traditional markets.

Southwest's route map gets biggest overhaul of all

While changes have been afoot at all big U.S. carriers during the pandemic, no airline has overhauled its route map as dramatically as Southwest Airlines.

The carrier has now announced plans to add 10 new cities during the pandemic.

The latest came last week, when Southwest said it intends to make Sarasota, Florida, its newest city early next year.

“It sounds risky to go open a bunch of new cities, but the alternative is worse,” Andrew Watterson, Southwest’s chief commercial officer, said to The Wall Street Journal this week. “You could wait [until] COVID is over. But that’s far too long.”

It’s all part of an aggressive growth play for Southwest as it looks to win marketshare while its rivals struggle. But for customers, it means a Southwest route map that’s dramatically bigger than it was pre-pandemic.

The ongoing coronavirus pandemic continues to impact airline operations — both in the U.S. and around the world. But for travelers, this means a completely reimagined route network for popular airlines.

Only time will tell whether these changes are permanent, but in the short-term, the above changes will likely continue until demand for air travel truly recovers — which means your first flight of 2021 may be one that never crossed your mind.