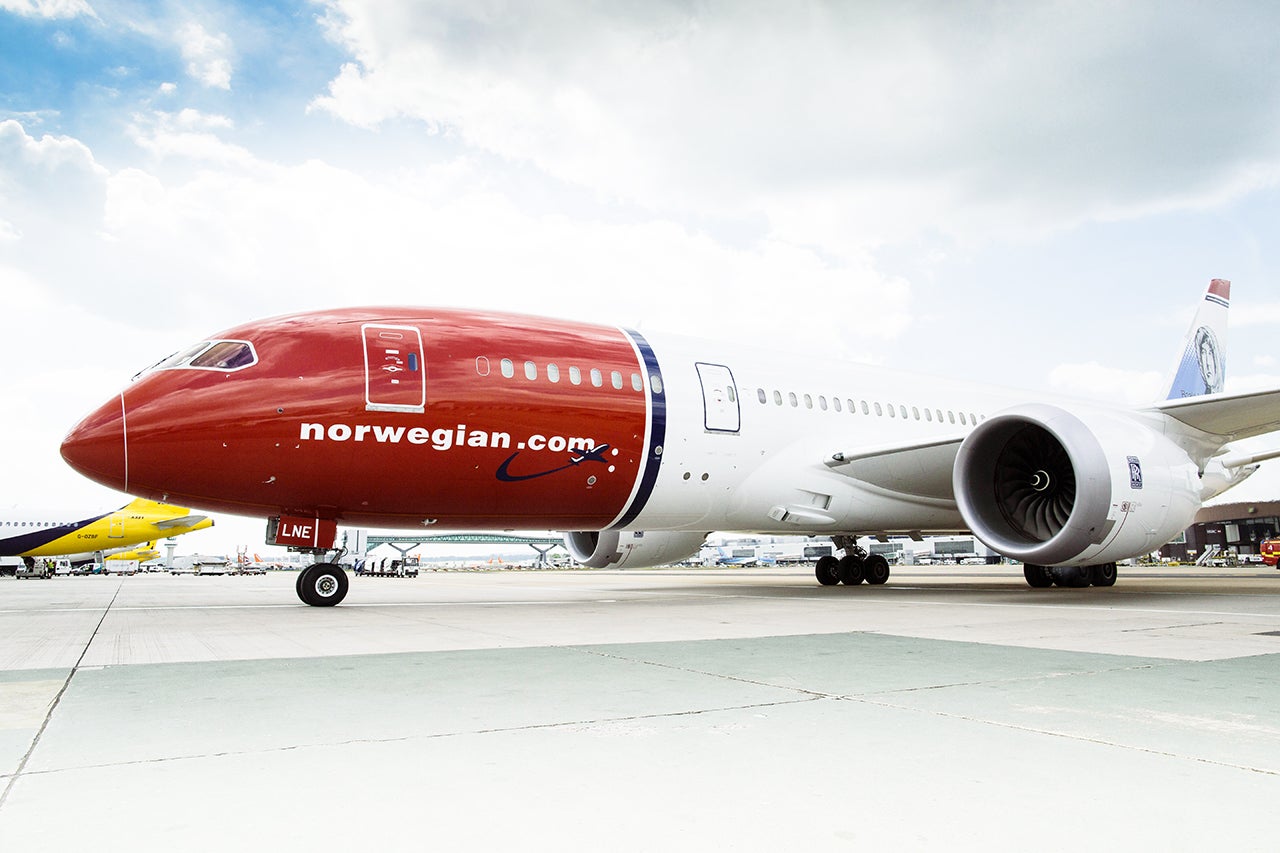 In mid-January, we learned of the news that Norwegian would sadly be ending its long-haul operations in a bid to survive the pandemic.

Back in April 2020 the airline hoped that it would be able to restart long haul operations in April 2021 but the devastating effects of the pandemic on the airline industry were just too much for the Norwegian low-cost carrier.

In its heyday, Norwegian was once the largest foreign operator at New York's airports, carrying more passengers to and from the city than even British Airways and Air Canada. Norwegian's route network from Europe to New York included nonstop flights from capital cities across the continent including Amsterdam (AMS), Barcelona (BCN), Madrid (MAD), Oslo (OSL), Paris (CDG) and Stockholm (ARN).

For now at least, as we head into 2021 and a new, strange era for aviation, Norwegian's short haul Boeing 737s will be predominantly based in Nordic airports serving some key destinations around Scandinavia and the rest of Europe.

So, what was so good about a long haul low cost carrier?

Norwegian made flying to New York, and other destinations in the US, from the U.K. and Europe more affordable than ever. We regularly saw return fares in economy starting at $336 (£245) or even less.

The same could be said for fares in its Premium cabin -- the airline's version of premium economy. Once for a review, we managed to snag a one way in Premium for just $560 (£408) only 12 days out -- that kind of price for competitors for a one-way ticket is quite frankly unheard of and would likely be in the thousands of dollars.

"The cheap last minute one way premium pricing! They saved my ass on more than one occasion, like when La Compagnie canceled my last minute Paris flight. I went to JFK and bought a Norwegian ticket on the way to the airport and salvaged my trip.", said Kelly.

The one downside with low fares is that you arguably got what you paid for when it came to the food in economy. Unfortunately, the airline featured in our worst economy meals in the sky round-up.

Not only were Norwegian's fares cheap, but the airline's entrance into the transatlantic market and the introduction of low cost, super affordable fares, forced the incumbent flag carriers operating the same routes to compete. Thanks to Norwegian, return economy fares with the likes of BA and Virgin were regularly below $400 (£300)!

Premium economy is notorious for being either really good, or really bad.

Norwegian's version of the cabin certainly fell into the former category. The great value fares mentioned above didn't mean a subpar experience. In fact, certain aspects of the experience were so good that Norwegian's Premium could be compared to some business class experiences. More specifically, for ex-TPG General Manager, Christian Kramer, the comfy seats with generous recline on Norwegian's Dreamliners were akin to the old-style, angled, business-class seats before lie-flats became the norm.

Brian Kelly approves of the 46 inches which is quite the complement given that he's 6 foot 7 inches tall.

"Their 787 premium economy was comfy enough to sleep for me on a quick transatlantic flight -- they will be missed!", explained Kelly.

The cabin comprises eight rows of Premium seating on the Dreamliner in a 2-3-2 config -- so 56 passengers in total.

In terms of food and drink, Norwegian's Premium earned a well-deserved spot in our round-up of the best premium economy meals in the sky. Interestingly, in another review, Kramer, didn't rave about the food he was served.

3. Flying Long haul from Gatwick instead of Heathrow to the US and beyond

For many Londoners, flying long haul often means a trip to Heathrow. Depending on where you live in the city, getting to Heathrow is via a long trip on the Tube, a rather expensive Heathrow Express journey or a long and expensive Uber ride.

Related: The best ways to get from Heathrow Airport to London

Gatwick on the other hand has fast and comparatively cheap direct train links to main interchange stations across London. The Sussex airport is also well connected to Brighton as well as other commuter cities North of London and along the South coast.

Sadly, with the permanent departure of Norwegian, gone are the days of being able to jet off from Gatwick on cheap nonstop flights to places like Buenos Aires (EZE), Los Angeles (LAX), New York (JFK) and Rio de Janeiro (GIG).

Related: The best ways to get to Gatwick Airport

Flying Norwegian long haul meant enjoying several hours on one of the most modern, comfortable and environmentally-friendly aircraft in the sky -- the Boeing 787 Dreamliner -- and the only long haul aircraft type in its fleet. According to the airline's website, it has a total of 37 in its fleet.

However, there was no guarantee of a modern new aircraft when flying a competitor. Pre-pandemic, it's no secret that many airlines' fleets were getting close to retirement age. Take BA and Virgin, for example, two U.K. airlines who operate many of the same transatlantic routes that Norwegian used to. While both airlines are slowly modernizing their fleets with the introduction of Dreamliners and A350s, flying across the Atlantic with BA would likely mean now-retired 747 or a triple seven that was due for a retrofit. And, if you were flying Virgin, a now-retired A340-600 or its slightly younger sibling, the A330.

Unfortunately for Norwegian, its Dreamliners were as troublesome as they were modern. The airline's newly delivered, revolutionary aircraft were plagued with engine issues and so the decision was made to lease other aircraft to replace the Dreamliners temporarily. There were times that instead, your flight could be operated by an Evelop A330, a Privilege Style 777 or even the infamous Wamos Air 747.

Related: Norwegian using leased aircraft from 4 different airlines on routes from London to the US

However, the real exciting surprise would be to find out you'd be flying HiFly's

A380, which operated the Gatwick (LGW) to New York (JFK) route on several occasions. The aircraft came from Singapore Airlines, and still featured the old school Singapore Suites at the forward part of the lower deck. Those often unsuspecting passengers who'd booked themselves a ticket in Premium were upgraded by default to this ex-Singapore Airlines suite, benefitting from a lie-flat bed rather than an inclined seat.

I was lucky enough to try it out myself.

Norwegian once had big aspirations for its long haul route network. Back in 2019, Bjørn Jkos, Norwegian's founder spoke of these aspirations: "If New York City is the barometer for success in the airline industry, our rapidly growing passenger numbers are proof positive that Norwegian is here to stay, with further efforts to deepen our roots in this market in the forthcoming years", said Jkos. Thanks to the pandemic, these plans have been grounded with no mention of a restart date anytime soon.

It may be several years before the aviation and travel industry gets back on its feet and when it does, we hope that Norwegian's long haul route network will make a come back, better and stronger than ever.

Featured image by Norwegian 787 Dreamliner. (Photo courtesy Norwegian)
Editorial disclaimer: Opinions expressed here are the author’s alone, not those of any bank, credit card issuer, airline or hotel chain, and have not been reviewed, approved or otherwise endorsed by any of these entities.

Our points-obsessed staff uses a plethora of credit cards on a daily basis. If anyone on our team wouldn’t recommend it to a friend or a family member, we wouldn’t recommend it on The Points Guy either. Our opinions are our own, and have not been reviewed, approved, or endorsed by our advertising partners.
See all best card offers
Related stories
Guide
It’s National Plan for Vacation Day — here’s how to make your dream trip a reality
Deals
Anti-Valentine's Day cruise deals: 4 bargains that will make you fall in love with sailing solo
News
Choice Privileges and Radisson Rewards Americas points transfers are live; loyalty program integration coming soon
News
Delta adds Hertz status for all Medallion elites, revamps earning structure for rentals