The 5 worst first-class meals in the sky today 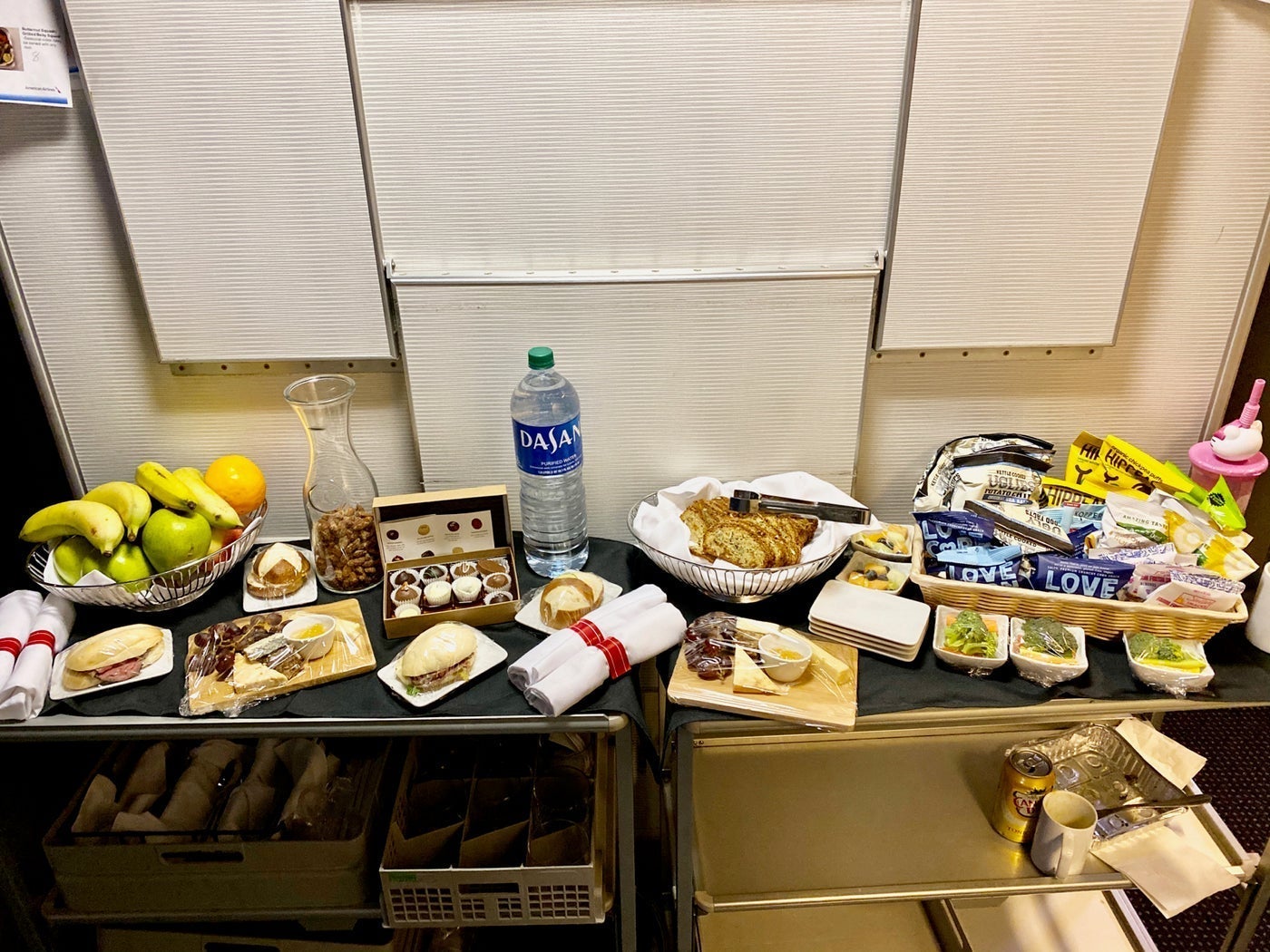 This round-up is a continuation of our best first-class meals in the sky. But this time, we're focussing on the first-class experiences that didn't really meet our high expectations.

The lowest score on the below round-up is 19/25, which is still very commendable. To call these meals "the worst" would be doing them a disservice.

But these first-class experiences just didn't cut it in comparison with our best five. The reason? The majority lacked a certain dish -- any guesses?

In "last" place is American Airlines, from Zach Griff's experience flying from Dallas to Hong Kong.

The service started with a choice of either pre-poured Champagne, orange juice or water and no warm nuts or hot towel were offered. A very business class start, really.

Related: What are the differences between business class and first class?

Caviar-lover Zach enjoyed his tiny caviar tart, but said he'd prefer if they had "served it right."

Having already run out of Maine lobster for the small plate, Zach was left with a rather tasteless tomato tart, which was saved by a "tiny dollop" of rocket pesto.

Having pre-ordered 30 days before his flight, Zach was also disappointed with his well-presented yet tough and overcooked cedar-plank halibut.

To finish, the Haagen Dazs ice cream topped with berries, hot fudge and cream was amazing. The menu included a cheese plate and a sticky toffee pudding, but they must have run out as Zach wasn't given a choice.

There was a selection of fruit, pralines, packaged snacks, veggies and sandwiches available from around five hours into the flight. However, "none of the prepared food looked all that appetizing," added Zach.

Still hungry before bed, Zach perused the mid-flight menu and ordered a mezze platter, which reminded him of Emirates first. Now that is a compliment.

Before arriving in Hong Kong, a rushed and unsubstantial continental breakfast was the final disappointment for Zach.

"Aside from the need to add more food options after the first meal, there was nothing bad about AA's first-class dining, yet nothing was memorable," summarised Zach. "Except the ice cream sundae."

Singapore, Swiss and Oman all scored 21/25. So, to rank them fairly, we took their overall review scores.

That means, with an overall score of 84, Singapore Airlines slipped into the second-to-last spot with this flight from Frankfurt to New York.

In classic Singapore Airlines style, TPG's Ben Smithson was offered both Dom and Krug. Naturally, he went for a glass of each.

Ben was given the option to choose exactly when he'd like to eat his breakfast. While he was disappointed that there was no caviar, it was the "best Sunday brunch [he] had ever had."

First up was a plate of freshly cut fruit.

For the main was a flavourful, fresh and decadent seafood noodle soup, which was just as good as the ones you might find at hawker stalls on the ground in Singapore.

To finish off his brunch extravaganza was a tough, grainy chocolate mousse with chili flakes.

Washed down with an "excellent" coffee. You know you're in good hands when in-flight coffee tastes anything better than dirty water.

A "light" meal of three courses was served around 90 minutes before landing, as Ben requested.

First up was a fresh and delicious lobster starter. Unfortunately, the shriveled-looking pretzel Ben picked out of the breadbasket "tasted about as good as it looked."

Up next was tasty beef cheeks in a wholesome- and hearty-looking stew.

To conclude food and beverage proceedings before landing was a rum babka and another coffee.

TPG's Zach Griff's hop from Zurich to Bangkok started with a glass of Grand Siècle, accompanied by rosemary nuts and a hot towel. Off to a great start, I'm sure you'll agree.

Shortly after takeoff, a trolley of starter courses rolled its way down the aisle. The Balik salmon was "absolutely perfect and tender to the touch," while the egg "mimosa" was "light and refreshing."

Next up was a courgette soup. The tarty addition of goat's cheese blended well with the flavor.

And in the name of reviewing, Zach also tried the niçoise salad. Save for the smoked tuna and quail eggs, it was a rather bland affair.

The flavor profile of the lemon-crusted turbot was great, and "the accompanying sides of pea mashed potatoes and courgette flower were excellent." Zach opted for a glass of Chardonnay, Chablis Premier Cru, which "paired perfectly with the fish."

The duo of desserts, a creamy chocolate cake with praline ice cream and almond tart with peach and apricot sorbet, were "scrumptious." What a combo!

A limited continental breakfast of Bircher muesli and seasonal fruits was served before landing.

Despite everything Zach ate being "quite good," Swiss definitely lost points here for lack of caviar -- a very common theme it seems.

The discovery of Oman Air's refrigerated mini bar was a great start to Zach Honig's flight from London to Muscat.

And a glass of Grand Siècle was served along with nuts and a warm towel. Splendid.

Next up were the quintessentially Middle Eastern dates and Arabic coffee.

The breakfast bread in Zach's spectacular bread bowl "could have come from a patisserie on the ground." In fact, Zach said it was "the best bread I've had on a flight."

(Photo by Zach Honig/The Points Guy)
Aside from its "busy" presentation, the marinated shrimp, smoked tuna and sous-vide salmon starter tasted fresh and had decent flavor. The exception was the over-salty tuna.

Following the second glass of bubbles, Zach switched it up and sampled some Bordeaux before agreeing to a glass.

As Zach was the only person in first class, he asked if he could try another breakfast option. The crew couldn't have been happier to rustle him up an otherwise-wasted portion of fried egg with hollandaise sauce -- "a fine option as well," Zach said.

Because why not, Zach also tried the fruit platter, which was served with a delicious vanilla panna cotta.

Zach described his Oman Air food experience as "adequate." Had he been served his beloved caviar, it might have been a different outcome.

With a very admirable score of 22/25, China Southern's A380 flying from Guangzhou to LA earned itself the coveted spot of best of the "worst" first-class meals.

Related: Will the Airbus A380 fly again once travel resumes?

A glass of lemon water wasn't the most first-class of starts, but a tiny fruit pastry and macaron go someway to make up for a lack of Champagne.

The first installment of Javi's six-course extravaganza was a smoked salmon canapé accompanied by warmed nuts. The Piper Heidsieck Champagne offered is the same served in the airline's business class.

The "surprisingly fresh" salmon and "tender and flavorful" chicken roll, which Javi chose for his main course, certainly didn't disappoint.

In his words, the carrot cream soup was "phenomenal." A strong word to describe soup -- must really have been something special.

Javi was very pleased that he'd picked the traditional Cantonese hot pot from the choice of five main courses. It was "deliciously authentic and flavorful."

In between main and dessert was a scrumptious-looking cheese plate.

And after all that, Javi finished things off with a plate of fresh fruit and ice cream.

The breakfast arrived at nearly 8 p.m., before arriving in LA and started with a basket of bread and pastries and even more fruit.

For his breakfast main, Javi thoroughly enjoyed his Chinese noodle soup --- its top-notch flavor was the highlight of his flight.

Would caviar be a deal-breaker for you? Personally, I'd rather have a bag of Monster Munch.

Expectations are that first class is far better than business class -- and given the price tag, rightly so.

On that note, hopefully, this guide, coupled with our best of first-class food in the sky, will help you decide which airline will be your next first-class venture.