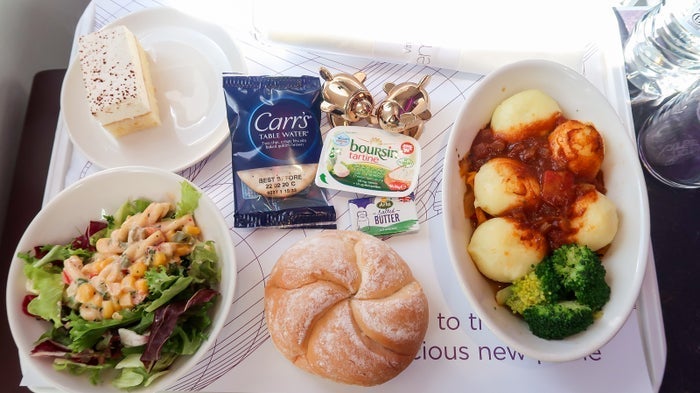 Premium economy is that sometimes-awkward in-between cabin class that often has travelers deliberating whether it's worth the hike in price from economy.

If you have any doubts at all, then this round-up of our five best premium economy meals in the sky might tempt you to spend that extra cash on your next long-haul flight.

We've already sampled the delights and disasters of economy dining, so now is the turn of premium economy.

Some of the experiences TPG staffers have had over the past couple of years could even be mistaken for business class. That's how good premium economy can be.

Given that reviewing flights wasn't possible for the majority of 2020, the meals featured in this write-up were consumed during reviews published from January 1, 2019. The below rankings take into account the best food options our reviewers took in pre-COVID-19 times. Note that if you plan to fly with one of these carriers during the pandemic, the inflight food offerings may be significantly different.

Score: 19/20 (in line with the updated scoring system)

The winner with an amazing score of 19/20 goes to Virgin Australia with this top-quality nosh served on a flight from Los Angeles (LAX) to Sydney (SYD).

Before we tuck in, many of you will know that Virgin Australia was recently bought out from administration earlier this year by Bain Capital. While the airline's model will switch to short-haul operations only, we thought it unjust not to give this unforgettable premium economy experience the top spot.

Related: What will the new Virgin Australia look like?.

First up, upon boarding was a crisp glass of sparkling wine. Non-alcoholic options were also available.

Rather than serving the entire meal on one tray as most airlines in economy and premium economy do, Virgin Australia serves each course separately.

Followed by "surprisingly tender" black pepper beef, which was juicy and perfectly cooked -- adjectives not often used when referring to even the best plane food.

There was a fully stocked grab-and-go snack and drinks bar, complete with wine for any passengers who wanted a tipple between meals.

Virgin Australia pulled it out the bag once again at breakfast. There were multiple starters and main options to choose from, including the crepes that JT opted for, which he said were "fresher than I'd expected." Oh, and actual Nespresso coffee. While I'm not the biggest fan of pod coffee, it's a definite upgrade from the tepid dirty water you often find yourself being served on planes.

I for one wish that Virgin Australia's long-haul makes a return to the sky so I can enjoy this more-premium-than-premium premium economy experience, too.

When you're welcomed onto a flight with a glass of bubbles, you know you're going to have a good time. In this case, TPG's Global News Editor Emily McNutt was offered water, orange juice or Prosecco. She opted for the latter because, well, why not?

Salads on planes can often be a little lackluster, but the cajun pasta salad that accompanied Emily's main course on this flight was "absolutely enjoyable." The main course she chose was equally as impressive -- super-sized vegetarian gnocchi stuffed with ricotta and asparagus.

However, the dryness of the cake at dessert plus the dry bread roll lost Virgin Atlantic a couple of points.

And finally, before landing, Emily was served Virgin's famed afternoon tea, which she said was "a phenomenal way to end the flight." There was a salmon and a mozzarella option for the sandwiches -- Emily chose the latter. Complete with a salted-caramel éclair, passionfruit and yuzu macaron and, of course, the classic scone with cream and jam. The big question though, cream or jam first?

Virgin's premium economy meal on this flight from London to New York was everything you'd expect from a premium economy experience, with a few added touches to make it all the more special. I for one can't wait to have my first Virgin Premium flight after reading this!

Singapore Airlines took its dining experience up a notch in premium to almost business-class levels.

Related: Watch as TPG U.K. reviews all four classes on Singapore Airlines' A380

Up to 24 hours before departure, Katie Genter was able to choose from six regular options or nine "Book the Cook" options for each of the two meals served onboard her flight from Singapore to Los Angeles. Book the Cook is a unique service for Singapore Airlines and is offered on select routes in premium economy, business and first.

Katie's pre-booked vegetarian roast cauliflower steak was served just 44 minutes after takeoff. But despite the meal's colorful and appetizing appeal, the only flavorsome part of it was the cheese on the cauliflower and oil in the grains.

After dinner, passengers were handed out tubs of Häagen Dazs ice cream and there were snacks and drinks readily available in the galley.

For Katie's final meal before landing, she opted for a coconut milk chia pudding, which was thoroughly enjoyed and a great ending to the long flight.

Next up is low-cost airline Norwegian. Norwegian's welcome drink offering doesn't feature sparkling wine or Champagne like you'd find on most full-service carriers -- but that didn't seem to be a problem for Ben Smithson on his flight from New York to London.

Several (not just one or two) drink rounds were offered throughout the flight, which is more than some full-service carriers in premium economy. Spirits were available as an extra charge, but this isn't surprising considering Norwegian is a low-cost airline.

While the beef hamburger main that Ben chose didn't look too appetizing, he described it as "extremely tasty." He also liked the added premium touches like being offered a selection of bread from a bread basket as well as macarons for dessert.

As you'd expect on a transatlantic flight, a second, lighter meal was served around 90 minutes before landing into London. While the fruit salad consisted of just three tiny pieces of fruit, the meal was just as good as the one served earlier.

Score: 16/20 (in line with the updated scoring system)

Related: How to get to New Zealand on miles and points

On to the Air New Zealand flight from Los Angeles to London Heathrow, there was no pre-departure drink. Braised lamb shank or salmon are really great premium options that TPG Reporter Katie Genter had to choose from. Only positive things were said about the main course of salmon as well as the accompanying chicken salad starter and garlic bread.

Breakfast was equally delicious. From experience, breakfast can often be a let down whatever cabin class you're flying in, so the fact that Katie was served up fluffy, not-soggy pancakes at 35,000 feet is really quite something. She could also have opted for a quesadilla.

Other premium perks were the proper ceramic mugs and glassware and a well-stocked snack basket in the galley with crew members on hand for any drink requests.

The airlines featured in this round-up certainly put the premium in premium economy.

When deciding whether to upgrade from your average economy class seat, it's definitely worth doing the research beforehand to make sure your dining experience is as far away from economy and as close to business class as possible.