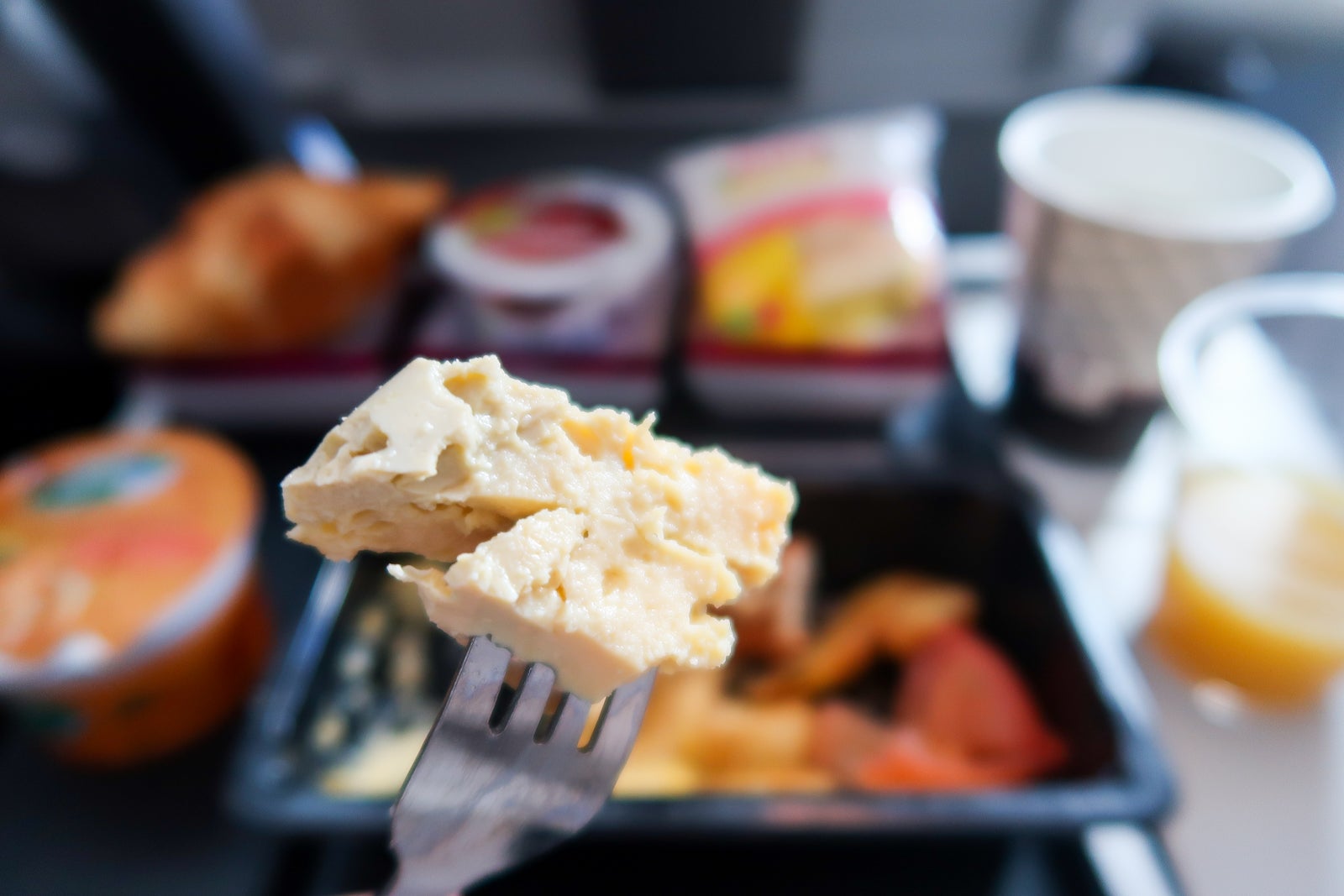 In our latest round-up of top economy meals, we showed that the food served in the back of the plane can often be an enjoyable experience.

Now it’s time to reveal the meals that, quite frankly, you probably would have sent back if you’d been served them in a restaurant.

Given that reviewing flights hasn’t been possible for the majority of 2020, the meals featured in this story were consumed in 2019 and in early 2020. The rankings below take into account the best food options our reviewers encountered in pre-COVID-19 times. Note that if you plan to fly with one of these carriers during the pandemic, the inflight food offerings may be significantly different.

By the time the meal cart got all the way back to TPG Reporter Katie Genter in row 30 on her flight from Papeete (PPT) to San Francisco (SFO), there was only one option left for her to choose from.

For the main meal, her default option was lightly-breaded chicken in a sweet sauce, accompanied by rice.

For the pre-landing meal, the quiche was also “sold out,” so Katie’s only option was a burnt-looking rectangle of soggy pizza.

Overall, Katie was disappointed by both the quantity and quality of her meals, which was likely compounded by the fact that United ran out of options during both services. That’s sure to leave a bitter taste in your mouth if it happens once, let alone twice on the same flight.

How could a meal served during a flight with a review titled “I didn’t want to leave the plane” end up in a tie for last place?

Related: Watch as TPG UK reviews all 3 classes on Qatar Airways’ A380

I’ll start with the positives: I love that Qatar’s economy passengers receive a menu. This is one of the features of the food and beverage service that was seen in some of our top-scoring economy class food reviews. That’s really all the good there is to mention.

It was an early morning departure for my flight from Doha (DOH) to London (LHR) and I was starving. The thought of scrambled eggs and sausage had me salivating. Unfortunately, despite it looking delicious, the potatoes were soggy, the sausage was average and the eggs were tasteless and rubbery.

Here’s a close up of said egg. Needless to say, I didn’t eat much of the meal.

Credit where credit is due, I let the flight attendant who served me throughout the flight know that I was still hungry post-breakfast and she immediately stocked me up with crew snacks (as there were no passenger snacks available) to last until the second meal service before landing.

When the second meal arrived, it was arguably worse than the first. She took pity on me again and gave me two coconut pastries, which I wolfed down out of sheer starvation even though they were sickeningly salty.

To say that TPG’s Senior Writer Ben Smithson was disappointed with his meal on his flight from Brussels (BRU) to Monrovia (ROB) would be an understatement.

The verdict was “cheap with a glimmer of quality.” The cheapness was a disappointingly tasteless couscous starter and a main course of white fish in an alarmingly yellow sauce that was small, overcooked and “basic.”

And the glimmer of quality was the chocolate dessert, which Ben compared to something you’d find at a Belgian artisanal bakery. While such delights are very welcome in economy, I think most of us would rather have a tasty and substantial main meal rather than a fleeting memorable dessert moment.

Related: When Air Belgium meets British Airways: flying an A340 in Club World from London to Newark

The drink situation also left a lot to be desired. There was only one drink run and no refills — not even a juice or water around the mid-flight mark. Brussels could do with taking a leaf out of South African’s book when it comes to booze.

You might be wondering why there isn’t a picture of the pre-landing meal. Well, that’s because there wasn’t one. Instead, Ben was merely served a chocolate bar.

This was perhaps the most detrimental to Brussels’ score. Before landing after a six-hour international flight, you would expect a light meal to be served — not the case here, though.

With a score of 10/15 is South African Airways, which interestingly enough also featured in our top-five economy meals in the sky.

Inconsistency is clearly to blame here.

One aspect of the food and drink service that was consistent on both flights, however, was the free-flowing alcohol supply that former TPG Managing Editor Alberto Riva also received on his flight from Johannesburg (JNB) to New York (JFK).

The beef stew option was merely worthy of a “pass” grade and not much else was said about it. As you can see below, it’s reminiscent of a school cafeteria dinner with lumpy and soggy potatoes.

Other words used to describe the main meal and breakfast on arrival were “tasteless” and “nothing out of the ordinary,” so there’s no surprise that it ended up in our bottom five.

While this meal wasn’t revolting, I think the main reason it features in this story is that it was a complete non-event.

It will be interesting to see the food scores on the next South African Airways review — was this sub-par meal an anomaly, or was the one in our best economy meals round-up the odd one out?

The French seem to love to hate foreign cuisine, as in their eyes, nothing can compare to French gastronomy. So it’s a shame Air France didn’t put that to the test.

The pasta that TPG Reviews Editor Nick Ellis chose was “perfectly tolerable” but “in no way memorable” — so average at best. And the soggy carrot and turnip salad left a lot to be desired. The lemon cake dessert, cheese and bread, however, were thoroughly enjoyed.

Before arriving in New York, a second, lighter meal was “lackluster.” What it lacked in imagination and nutrients, the tiny veggie sandwich, cake and yogurt drink definitely made up for in carbs. It’s a non from me.

While there was nothing disgusting enough about the food to curdle your stomach, it was definitely sub-par.

The hard truth is when flying economy, sometimes you get served food that might only be a borderline fit for human consumption.

While these examples don’t represent the overall culinary experience you’ll receive on these airlines, it provides some insight into how bad things could be, especially when flying similar routes and aircraft to the ones in these reviews.