These are the best times to visit New York City 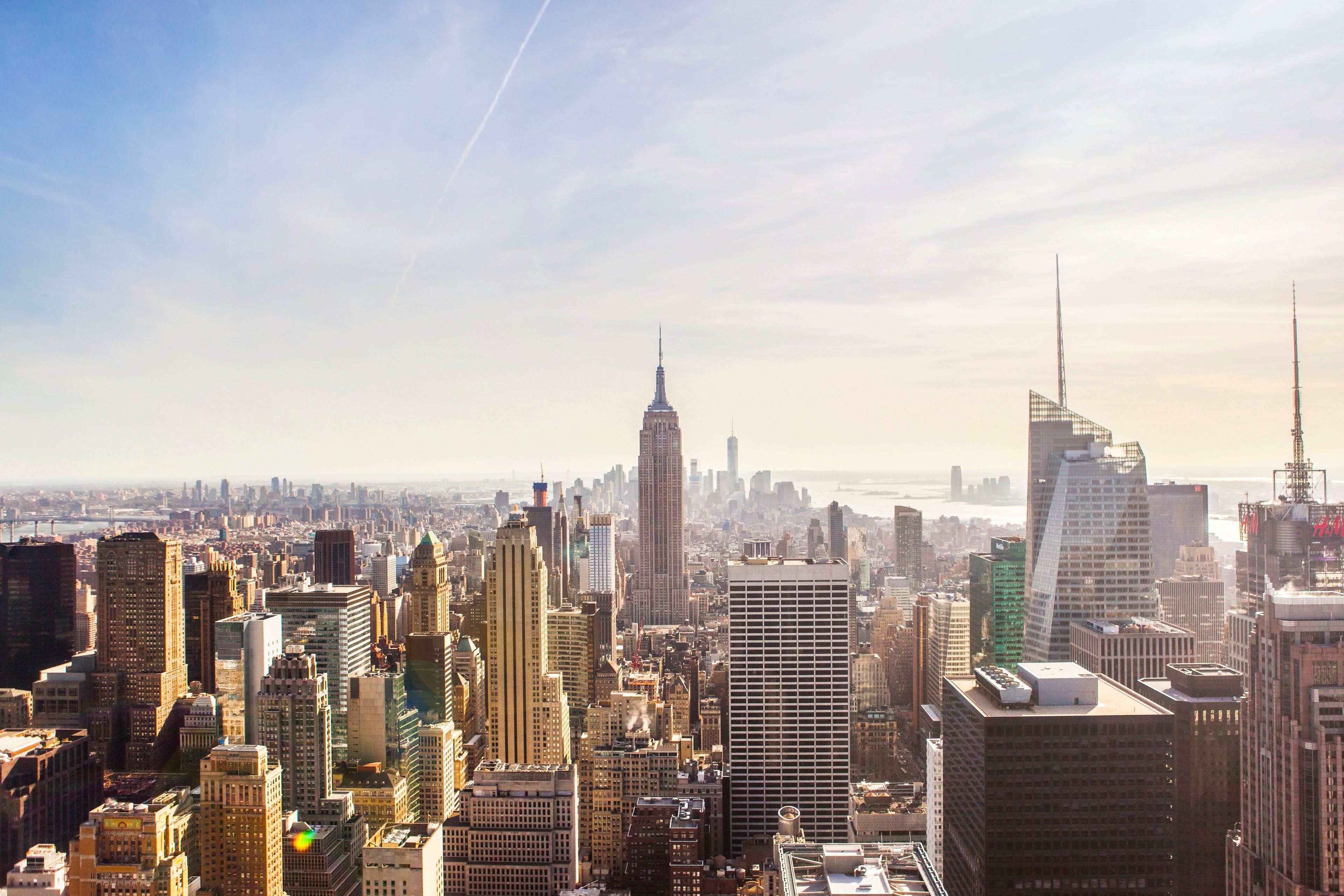 Editor’s note: As the travel industry reopens following COVID-19 shutdowns, TPG suggests that you talk to your doctor, follow health officials’ guidance and research local travel restrictions before booking that next trip. We’ll be here to help you prepare, whether you’re traveling this month or next year. Please be aware that, due to the pandemic, most events, festivals and public gatherings are canceled until further notice. Make sure attractions, events and properties are open before booking travel.

The Big Apple, the City That Never Sleeps, Gotham: Whatever you call it, New York City is alluring all year round.

We might be biased, given that TPG is headquartered here, but we think it's one of the greatest cities on Earth. Between the museums, the parks, the red-hot restaurant scene and the incredible nightlife, there are so many things to do here you can never get bored.

Of course, planning a proper trip to the city requires some strategy. When the world returns to normal, will your priority be visiting museums like the Met, the Museum of Modern Art and the Guggenheim? Or getting tickets to a concert or Broadway play? Are you hoping to score a table at the city's hard-to-get-into Michelin-starred restaurants? Are you willing to go in the off-season to avoid the crowds, or are you dreaming of a New York Christmas?

We tapped data analysts to find out the cheapest times to visit New York City, considered the crowds and weather, and even looked ahead to the best events and festivals worth flying for so you can determine the best time to plan your trip to New York City.

Getting to New York City used to be notoriously expensive, but we've been seeing more and more good deals on airfare in recent years. The key is to avoid peak season which, usually, is May through August, with a bustling holiday period from November until the end of the year.

Analysts at Hopper and Skyscanner in 2019 determined that you can typically find the best deals on domestic flights to New York City right after the holidays, with prices in January and February the cheapest you can get all year. Hopper found that during these early-year winter months, domestic airfare costs under $200 round-trip, on average, from destinations across the U.S.

September will usually yield good deals, too, right after the back-to-school rush, when round-trip tickets average $224. In order to score the best deals, Hopper says you should plan to book your tickets between four to nine weeks in advance. Skyscanner also recommends booking at least a month in advance.

You can expect hotel rates to fluctuate as well, though demand tends to be high throughout the year because New York gets so many business travelers. According to Booking.com, the best deals on hotel rates can usually be found in February, when you can expect to pay 50% less than in October, which has historically been the most expensive month of the year.

According to Hopper, Sundays are generally the least expensive day to check into a hotel in New York. Planning to spend a weekend in the city? You can expect to pay an 18% premium at hotels. Hopper recommends booking your hotel just one to two weeks in advance, when prices begin to drop, but warns there will be less availability, so you might not get the exact room or hotel you want.

Because of the global climate crisis, the weather in New York seems to be getting more unpredictable every year. Generally, however, you can expect frigid temperatures and snow in winter (December through March) and sweltering heat in the summer, especially July and August, coupled with severe thunderstorms.

For comfortable weather, your best bet is to visit the city in the spring (April and May) or fall (September through November), when you can enjoy the fall foliage in the city's parks while sipping a spiced seasonal latte.

In terms of cultural events and happenings, the months of October through May would normally have the busiest calendars. That's when major museums mount blockbuster exhibitions, new Broadway shows debut and the opera, ballet and concert seasons are in full swing. Cultural institutions tend to have less programming in the summer, when many New Yorkers escape the city on weekends, but there are street fairs, outdoor concerts and film screenings, as well as Shakespeare in the Park and other events.

When to visit New York City for events and festivals

This is the City That Never Sleeps, so when life returns to normal, you can expect to find festivals and events worth traveling for all year long. New Yorkers tend to go all-out for holidays such as Independence Day, Halloween, Thanksgiving, Christmas and New Year's Eve. There are also tons of niche festivals, parties and events throughout the year.

New York can be quite magical over the holiday season, when the streets are decked out in lights and garlands and department stores put up their most elaborate window displays. The giant Christmas tree at Rockefeller Center is usually lit in front of a live audience each year at the junction of West 49th and 50th Streets as well as Fifth and Sixth Avenue and is broadcast on NBC as well. And every New Year's Eve, the Ball Drop draws approximately 1 million people to Times Square (though we expect it might look a little different entering 2021).

From November through January, the Rockettes would usually perform their Christmas Spectacular at Radio City Music Hall with the New York City Ballet performing The Nutcracker at Lincoln Center. There are winter markets with vendors selling gifts and seasonal specialties at Bryant Park, Union Square, Columbus Circle and even inside Grand Central Station. Many hotels, restaurants and bars deck their halls for the holidays and offer seasonal specialties, too. If you're planning ahead for 2021 and beyond, these are some of the classic New York festivities to expect.

After a long, cold winter, New Yorkers tend to come out of hibernation in the spring and many outdoor bars and restaurants reopen for the season. The Tribeca Film Festival draws actors, directors and their fans to the city in Aprill for a series of film premieres, red carpet events and parties. And the first Monday in May brings the biggest star-studded event of the season: The Met Gala, whose theme coincides with the exhibit at the Met's Costume Institute.

June is Pride Month in New York City, with events and festivals usually taking place almost every day and culminating in the world's largest Pride Parade. In July, New York puts on one of the best Independence Day celebrations in the country, with a spectacular fireworks show and parties across the city.

There are fun seasonal activities too, like the annual Summer Streets celebration, Shakespeare in the Park at the Delacourt Theater in Central Park, outdoor concerts and film screenings at Bryant Park, Brooklyn Bridge Park and other green spaces. You'll also find plenty of food trucks and festivals such as Smorgasburg — a series of open-air food markets with specialties from local vendors in Brooklyn and beyond — on weekends during a typical New York City summer.

Fall not only brings some of the best weather but also some of the best holidays and events. Archtober is celebrated over the entire month of October, with hundreds of architecture-focused tours, exhibits, talks and events like Open House New York, which throws open the doors to some of the city's most incredible off-limits sites. October also brings Halloween, which is a big deal in New York City. The Greenwich Village Halloween Parade draws New Yorkers of all stripes to march through the streets in elaborate costumes.

In November, it seems like the whole city comes out to cheer on more than 50,000 runners who participate in the New York City Marathon. The Macy's Thanksgiving Day Parade is one of the world's largest parades and is broadcast all over the country.

There really is no "best" time to go to New York City, because every time of year has its own charms and novelties. But first-time visitors generally get the most out of a visit in the spring or fall. January and February offer the best deals, but those are also the coldest months, so you have to decide if the trade-off is worth it. (And you'll need to pack your puffiest winter jacket.)

The best day to check into a hotel is on a Sunday, and, if you're flexible about where you want to stay, you're more likely to get a good deal on a room if you wait to book until a week or two ahead of time. Just be sure to book your flight at least a month in advance.

Related stories
Save money with these travel-related offers on your credit cards this month
Use these shopping portal bonuses to earn extra miles this holiday season
Using miles and points to book airline tickets and hotels for others
Maui magnificence: A review of Kaanapali Alii, a Destination by Hyatt Residence
Featured image by Christopher Postlewaite/NYC &amp; Co