Best ways to redeem points and miles on Hawaiian Airlines

Articles
Ethan Steinberg has been a frequent flier for as long as he can remember. He went from studying abroad in Paris to moving to Shanghai after graduating college, where he covered all things travel in the Asia-Pacific region for TPG.
Jan. 29, 2022
•
13 min read 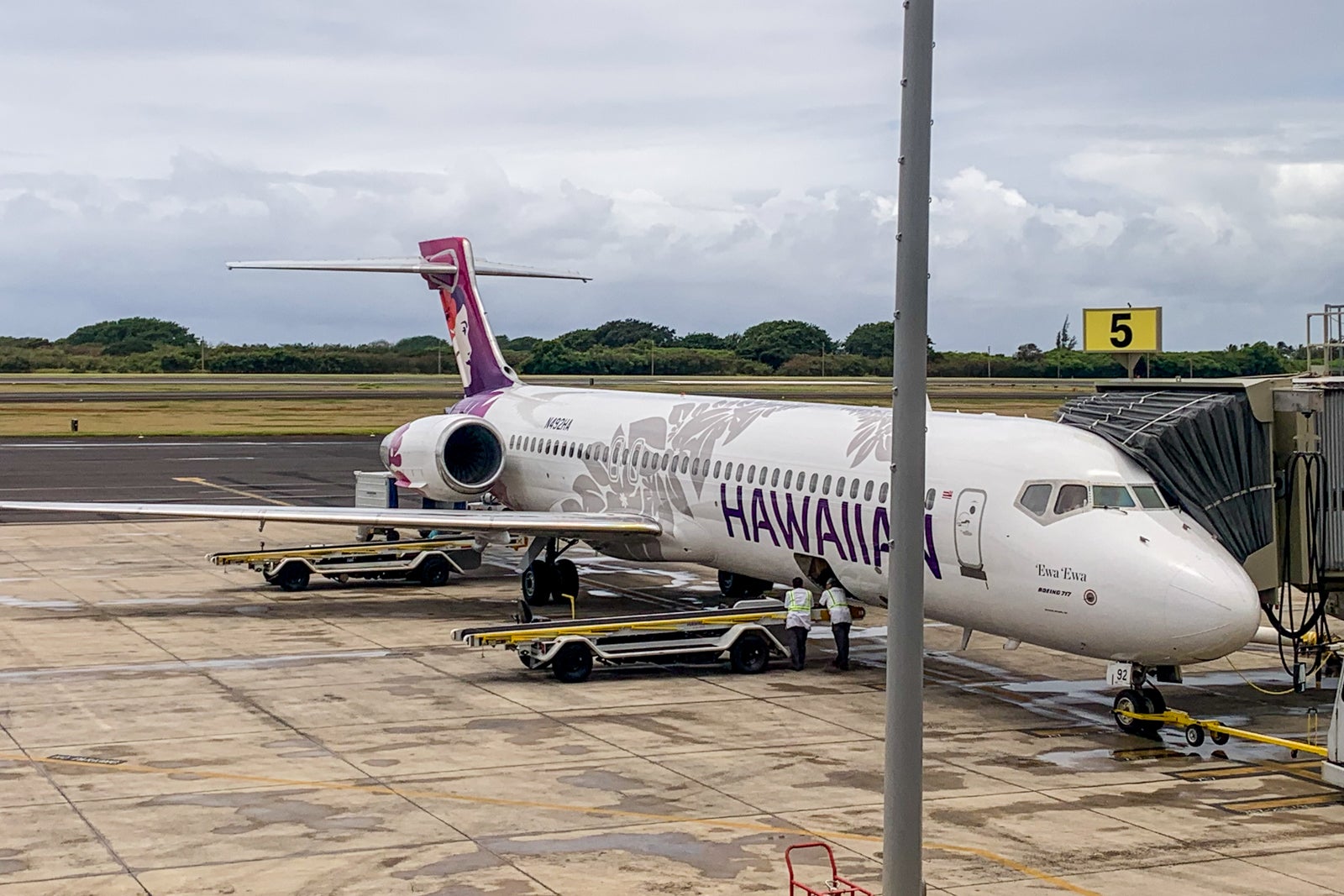 Is it time to say "Aloha!" to Hawaiian Airlines when it comes to points and miles?

Hawaiian Airlines is not a member of any of the major alliances and has a relatively small route network compared to U.S. legacy carriers. As a result, when we talk about the best ways to fly to Hawaii on points and miles, it's easy to overlook the namesake carrier itself.

Doing so would be a shame, though, as there are many different ways to book award tickets on Hawaiian-operated flights. In addition to an extensive list of interisland flights, the carrier also flies nonstop to several West Coast destinations, as well as New York, Boston and beyond (including Tahiti and Australia).

Let's take a look at the best ways to redeem points and miles for flights on Hawaiian Airlines.

The first way to make the most of Hawaiian is to redeem miles directly through Hawaiian Airlines' HawaiianMiles loyalty program. Although it operates independently of the three major airline alliances (Star Alliance, Oneworld and SkyTeam), there are still great options for boosting your miles balance with Hawaiian Airlines. Plus, the miles you earn with the program never expire.

You can also earn miles with the Hawaiian Airlines® World Elite Mastercard®, which currently offers an increased sign-up bonus of up to 80,000 miles. You'll get 60,000 miles after you spend $2,000 on the card in the first 90 days of account opening. Plus, you'll earn an additional 20,000 miles after spending a total of $4,000 on purchases within the first six months. As you'll soon see, that's sometimes more than enough miles for a one-way ticket to Hawaii in a lie-flat seat.

The information for the Hawaiian Airlines World Elite Mastercard has been collected independently by The Points Guy. The card details on this page have not been reviewed or provided by the card issuer.

Another option is to transfer miles to Hawaiian from the American Express Membership Rewards program, which offers a 1:1 transfer ratio and periodic transfer bonuses. You can earn Membership Rewards points easily by taking advantage of the welcome offers on cards such as the American Express® Gold Card. New applicants for the Amex Gold Card can currently earn 60,000 points after spending $4,000 on their new card in the first six months of card membership.

With the Marriott Bonvoy Brilliant® American Express® Card, you can earn a welcome offer of 150,000 Marriott Bonvoy bonus points after you use your new card to make $5,000 in eligible purchases within the first three months of card membership.

Related: Here's what you should know before transferring Marriott points to airline miles

Finally, you can also transfer Bilt Rewards points to Hawaiian at a 1:1 ratio.

Hawaiian Airlines has joined the ranks of airlines using dynamic award pricing in place of a fixed chart. The rates aren't nearly as bad as some airlines that follow this approach, though, and Hawaiian is among the few carriers to publish a range of what you can expect to see with its dynamic pricing.

You can expect peak travel dates to drive up the prices pretty significantly, but outside of that, cheaper economy awards tend to be readily available on many routes.

For a random week in February, every day had availability between Los Angeles (LAX) and Honolulu (HNL) at the lowest economy rate of 20,000 miles each way, with most dates having more than one nonstop flight available at that price.

The pricing for first class is where things start to get more varied, with some dates pricing at the top of the range at 80,000 miles each way. Still, it's possible to score this flight for only 40,000 miles, especially from the West Coast.

Related: How to fly to Hawaii for just 15,000 miles round-trip

One of the odd quirks about dynamic pricing is that first class might be cheaper than economy on some days. The most expensive economy awards from the West Coast to Hawaii cost 95,000 miles each way, while business class tops out at 80,000 miles each way.

In addition to operating long-haul flights to the Aloha State, Hawaiian also operates on dozens of interisland routes. These can be great if you're planning to visit multiple islands on your next trip to Hawaii or if you're a local that wants to see friends and family on another island.

With prices starting at 7,500 miles each way in economy, these awards may seem like a great value. But note that cash prices for these short hops are also sometimes very low. You might struggle to get even 1 cent per mile of value with these redemptions on off-peak days.

That said, availability is often incredibly generous on these routes, even if you're traveling with the whole family. Because these are all domestic flights within the U.S., you shouldn't have to pay more than the normal $5.60 in taxes, keeping your award flights as close to free as possible.

Related: Everything you need to know about interisland travel in Hawaii

Another great use of Hawaiian Airlines miles involves flights to Tahiti (PPT). Hawaiian Airlines operates a weekly nonstop flight from Honolulu (every Saturday), and you can find economy award space from 27,500 miles each way when starting in Honolulu. You can even find lie-flat first-class seats from Honolulu on some dates for 47,500 miles each way.

French Polynesia is otherwise tricky to get to on points and miles, but breaking up your trip with a stop in Honolulu might be the way to go. Award prices starting from the mainland are higher, with economy starting at 47,500 miles each way.

You can extend this trick to Australia and New Zealand, two other challenging destinations to get to on points and miles. If you fly from North America through Hawaii (with an overnight in Honolulu), these awards start at 60,000 miles each way in economy. That's certainly on the pricey side, but you might consider that a fair trade for an easier time finding award space and a stopover in Honolulu on the way. Flights from the U.S. to Japan and Seoul, South Korea, are priced similarly.

Related: How to get to Hawaii: Fly nonstop from 27 mainland US cities

As noted above, Hawaiian Airlines doesn't belong to any of the three major alliances. Still, it has partnerships with several carriers that allow you to book Hawaiian-operated flights to get to the islands. Here's an overview of some of the best, including the easiest ways to boost your account balances in each program:

One lucrative option is through Korean Air's SkyPass program. While these miles are difficult to earn these days, Korean Air does offer a rewarding round-trip award chart for flights on Hawaiian Airlines. However, you're limited to round-trip awards whenever you redeem SkyPass miles for Hawaiian trips.

Earning SkyPass miles: Your only way to leverage transferable point currencies is to transfer Marriott points at a 3:1 ratio (with a 5,000-mile bonus for every 60,000 points you transfer).

You can also redeem miles through Virgin Atlantic's Flying Club program. The carrier displays round-trip pricing in its partner award charts, so you can see that interisland round-trip flights cost 15,000 miles. However, unlike with Korean, you can redeem Flying Club miles for one-way travel at half the rates below, putting the flights in line with what Hawaiian would charge.

Virgin Atlantic splits flights to the U.S. into East Coast and West Coast pricing, so avoid the extra charge for JFK and Boston flights if you can.

Earning Flying Club miles: Virgin Atlantic miles are among the easiest to earn, as the carrier partners with Amex Membership Rewards, Chase Ultimate Rewards, Citi ThankYou Rewards, Marriott Bonvoy and Bilt Rewards. We've even seen transfer bonuses from Amex and Citi in the past.

While JetBlue TrueBlue uses a revenue-based award chart for its flights, it has a fixed pricing scheme for flights operated by Hawaiian Airlines. Here's the one-way economy-class award chart:

And the one-way business-class award chart:

Interisland flights from 6,000 points each way in economy can be a great deal when paid prices are high. Flights to the U.S. aren't bad either, but the premium cabin pricing is too high for the product you receive.

One interesting note is that JetBlue lumps all the international destinations Hawaiian Airlines serves into one category. As such, you can book one-way awards from the U.S. to the South Pacific for only 50,000 miles in economy with plentiful award space. While most people don't think of Hawaii as the ideal place to stop en route to Australia, it just might be at these prices.

Earning JetBlue points: JetBlue offers 1:1 transfers from both Chase Ultimate Rewards and Citi ThankYou Rewards. You can also transfer American Express Membership Rewards points, but the transfer ratio is just 1.25:1 so it's not a great value proposition.

Even though Hawaiian Airlines operates many of the actual flights between Hawaii's various islands, the U.S. legacy carriers (American Airlines, United and Delta) allow their customers to redeem miles for these flights.

American lets you redeem 15,000 miles for a first-class ticket, but since these flights are typically under an hour, it's probably not worth the premium.

You'll want to check the paid prices of these tickets before you redeem miles. At these rates, a $59 or $69 one-way flight will get you less than 1 cent of value per mile, well below TPG's valuations for all three currencies.

Even though Hawaiian Airlines isn't always the cheapest way to redeem points for flights to Hawaii, it's certainly helpful if you plan on traveling between the islands (even though Southwest is also an option now for Hawaii island hopping).

Whether you book directly with HawaiianMiles or through a partner program, it's worth doing a quick cost comparison to make sure you're paying the fewest miles possible, especially since so many of the above programs partner with the major transferable point currencies.

Even if you aren't traveling to Hawaii, you should still keep Hawaiian Airlines on your radar for South Pacific and Tahiti flights. Low award rates from the mainland U.S. and generous economy availability give you plenty of reason to stop overlooking this option for your vacation to the Aloha State.

Featured image by Hawaiian Airlines plane July 2021. (Photo by Clint Henderson/The Points Guy)
Editorial disclaimer: Opinions expressed here are the author’s alone, not those of any bank, credit card issuer, airline or hotel chain, and have not been reviewed, approved or otherwise endorsed by any of these entities.