Articles
Fran Golden is an award-winning cruise journalist whose work regularly appears in Bloomberg, Travel + Leisure, Afar and other travel outlets. She is the author of several cruise and travel books, including “100 Things To Do In Alaska Before You Die." Fran lives in Cleveland, Ohio. Although fond of lake Erie, her first love is the sea.
Aug. 03, 2022
•
11 min read 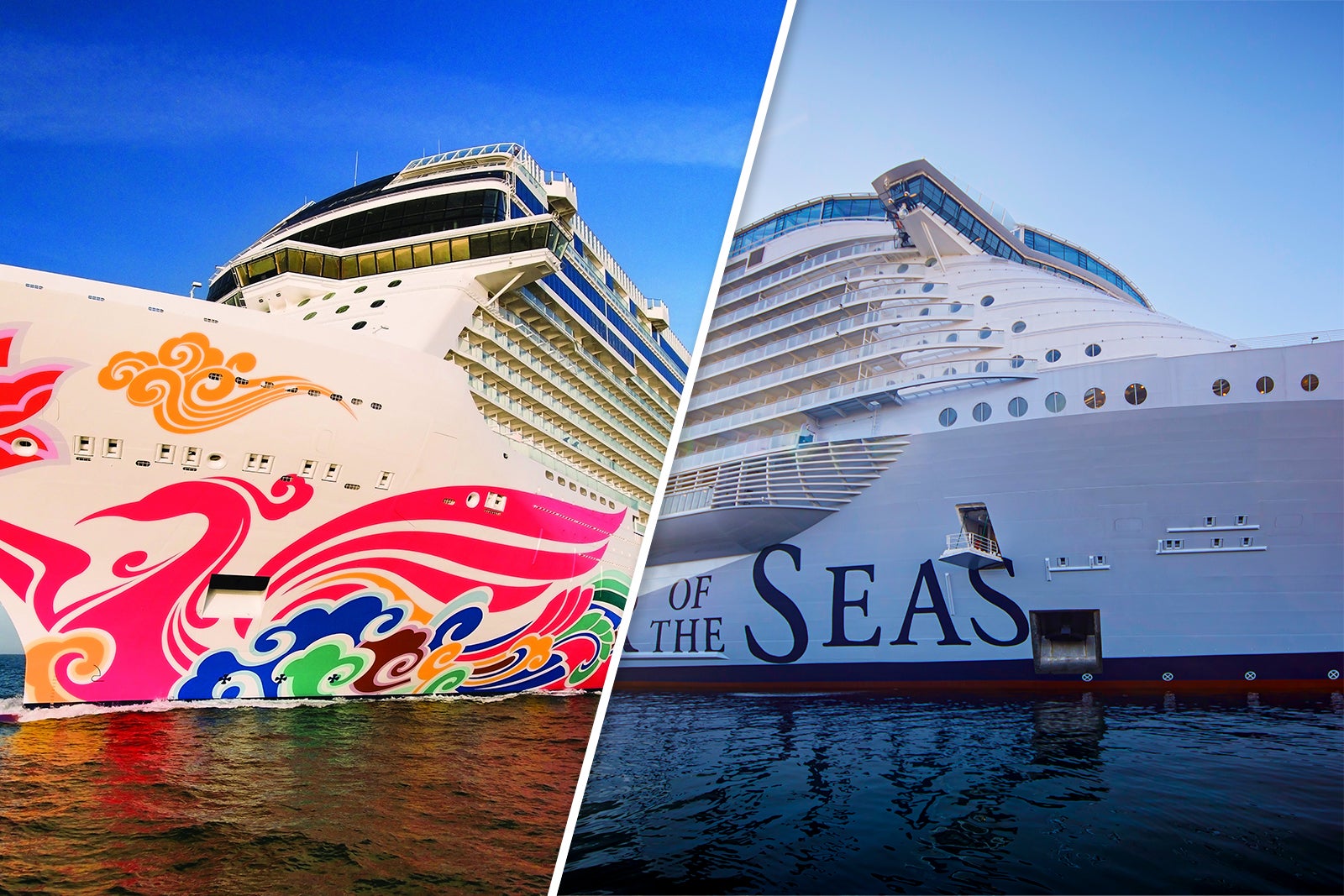 If you are considering a cruise with Royal Caribbean or Norwegian Cruise Line, you are looking for an active, big-ship cruise experience — possibly on some of the largest ships in the world.

These two companies focus on cruises for everyone — couples, seniors, families — with activities and “wow” attractions to match. Their ships are highly popular, particularly on Bahamas and Caribbean routes.

Let’s compare Norwegian Cruise Line to Royal Caribbean to see what they have in common — and what they don’t — so you can find the cruise that’s right for you.

While Royal Caribbean has several ships that carry fewer than 2,250 passengers, the bulk of the line’s ships carry 3,000 to 4,000 passengers; its five biggest ships — topped by the Wonder of the Seas — are the world’s largest cruise ships and carry more than 5,400 guests. These Oasis-class ships are so big they are divided into neighborhoods, including a Central Park with real trees and a Boardwalk neighborhood that’s patterned after Coney Island, with a carousel, hot dog stand and high-diving show.

Norwegian Cruise Line ships range in size from just over 1,900 passengers (quaint by megaship standards) to more than 4,100 passengers. The line is not trying to win the size war, but has plenty of excitement on board. The latest Norwegian ships are topped by multi-level go-kart racetracks that add vroom to the cruise experience.

Both cruise lines proudly offer a broad range of accommodations. Norwegian particularly shines in the area of creativity and innovation.

On top of the newest ships in the fleet is The Haven, a suite complex with a private restaurant, sundeck, pool and lounge — basically a separate boutique hotel on top of the ship. Guests in The Haven get privacy when they want, but also access to all the fun activities elsewhere on board. The contemporary decor reflects the fact you’re staying in fancy digs.

Norwegian also pays special attention to solo travelers. In The Studios, again on the newest ships, passengers traveling solo can book a creatively designed inside cabin that is priced for one (a cruise rarity). It comes with exclusive access to a shared lounge, so you can get social with other solo travelers if you wish.

Elsewhere, family cabins are located near children’s facilities and spa cabins are near the spa.

Royal Caribbean seeks to please all travelers, with the largest selection of cabin types of any cruise line. Royal has everything from tight and inexpensive inside cabins with virtual balconies (sea views delivered via video) and solo staterooms on select ships to two-story loft suites. Some suites have views of the high-diving show, while some standard-sized cabins face the Boardwalk or Central Park neighborhoods of the ship. (You exchange ocean views for people-watching.) Royal has moved to match Norwegian by providing suite guests with access to a private lounge, restaurant and sun deck on its newer ships.

Royal’s decor is soothing, subtle and slightly upscale, akin to a Marriott or Hilton hotel.

Related: Everything you want to know about cabins and suites on Norwegian Cruise Line ships

When looking at Royal Caribbean's versus Norwegian’s dining options, both lines have a lot of fee-based specialty restaurants that surpass what they offer in their free venues. To some cruisers, these restaurants may seem to be a money grab, but foodies don’t mind paying for the upgrade in meals.

Years ago, Norwegian developed what it calls “Freestyle Cruising,” a model that sought to turn some cruise traditions on their head, such as assigned tables in a large main dining room. Instead, passengers eat when and where they want, though in many cases reservations are required and there is an extra fee.

The line goes all-out with choices; large ships such as Norwegian Escape offer more than two-dozen dining experiences. You can eat for free in smaller dining rooms or the buffet, or splurge, for instance, on steak, French, Brazilian and Asian fare -- even “Cheeseburgers in Paradise” at Jimmy Buffett’s Margaritaville. Norwegian pays particular attention to providing outdoor dining options.

For food included in the cruise fare, Royal Caribbean focuses much attention on its Windjammer Marketplace (the buffet) and main dining rooms (where you can opt for assigned tables or anytime dining). A shining point of the fee-based options, on select ships, is Jamie’s Italian with British celebrity chef Jamie Oliver. Fans also rave about the line’s fancy Chef’s Table experience, a multi-course affair with chef commentary on what you are tasting.

Related: The ultimate guide to cruise ship food and dining

Knowing that parents appreciate some downtime, both cruise lines have well-established programs to keep your kids happy. You can have a massage at the spa, hit the casino or otherwise do grown-up things knowing that your children are in a camp-like program with youth counselors who are leading age-appropriate activities such as arts and crafts, movies and sports in playrooms or cool clubs for tweens and teens.

Royal Caribbean’s Adventure Ocean program (for ages 3-12) has an educational spin, with opportunities for kids to become a Certified Jr. Adventure Scientist. There’s also a Royal Tots and Royal Babies nursery for those travelers with infants and toddlers, and a teen lounge for 13- to 17-year-olds.

Norwegian’s Splash Academy (for kids ages 5-12) entertains with creative play, including a Circus School, while Entourage (for those ages 13-17) keeps teens well-occupied with games, sports and parties in a hip club.

Both Royal Caribbean and Norwegian have developed their newer ships to be active floating playgrounds, with supercharged indoor and outdoor activities for all ages. Royal is tops in its ability to push the envelope, but Norwegian is coming on strong.

Related: The 9 craziest attractions you’ll find on a cruise ship

Norwegian Cruise Line and Royal Caribbean have a battle of sorts in terms of signing Broadway shows for onboard productions. Both cruise lines recruit talent from Broadway, London’s West End and around the world to rehearse in their own studios in Florida and have large casts of performers on their ships. The shows are slightly shortened versions of what you would see on land.

Royal Caribbean’s roster includes such popular shows as “Grease,” “Hairspray” and “CATS” on its biggest ships. On Norwegian ships, you can catch productions of such popular Broadway shows as “Kinky Boots,” “Six” and “Summer: The Donna Summer Musical,” as well as the super-fun pub show “The Choir of Man.”

Norwegian features some adults-only show productions you pay extra for because they are themed on wine or prohibition cocktails and come with drinks. Comedy is part of the scene – Norwegian Prima even has an improv club – and Norwegian’s themed parties are particularly popular with the late-night crowd. Fun bars include the Skyy Ice Bar, where you wear a parka to enjoy vodka on ice. Select ships have a Cavern Club featuring a Beatles cover band, complete with shaggy hairdos.

While both lines offer a roster of games and contests, Norwegian has floating, participatory versions of popular TV shows such as “Deal or No Deal” and “The Price is Right.”

Related: Which cruise ship activities should you book ahead of time?

Who is on board?

Norwegian’s “Freestyle Cruising” is designed to be more contemporary and less traditional, and the crowd on board tends to embrace the carefree nature of the experience. Dress is whatever you like — dress up for a date night or down for a casual meal in a pub. On cruises from the U.S., the crowd is mostly from North America and represents all ages, from kids to seniors. Some adults stay up late partying in the dance club or trying their luck at Norwegian’s award-winning casinos.

Royal Caribbean’s crowd is a mix of international travelers and those from North America, including couples, families and singles from all walks of life. You’ll find night owls on Royal too, though the crowd is a tad more upscale than Norwegian. That’s partly because Royal Caribbean ships have a higher percentage of expensive suites on board and attract the types of travelers who can afford to pay for that type of luxury.

Related: Which cruise brand is right for you? A guide to the most popular lines

Both Norwegian and Royal Caribbean position the bulk of their ships in North America, but also have ships sailing in destinations around the world.

Norwegian is the only cruise line with a ship — the U.S.-flagged Pride of America — that sails year-round in the Hawaiian Islands. Norwegian focuses much attention, too, on the Caribbean, Bahamas, Alaska, New England and Canada, the Mexican Riviera and Bermuda. The line offers popular, affordable sailings in the Mediterranean and Greek Isles. Other destinations include Northern Europe, Africa, Australia and New Zealand, and South America.

Royal Caribbean likewise puts much emphasis on North America — the Caribbean, Bahamas (including the line’s own extravagant private island, Perfect Day at Coco Cay), Alaska, Canada and New England, and the Mexican Riviera — but also sails several regions in Europe. Its ships can be found in other international destinations such as Australia and New Zealand and the Middle East.

Related: The 5 best destinations you can visit on a Royal Caribbean ship

Featured image by (Photos courtesy of Norwegian Cruise Line and Royal Caribbean)
Editorial disclaimer: Opinions expressed here are the author’s alone, not those of any bank, credit card issuer, airline or hotel chain, and have not been reviewed, approved or otherwise endorsed by any of these entities.