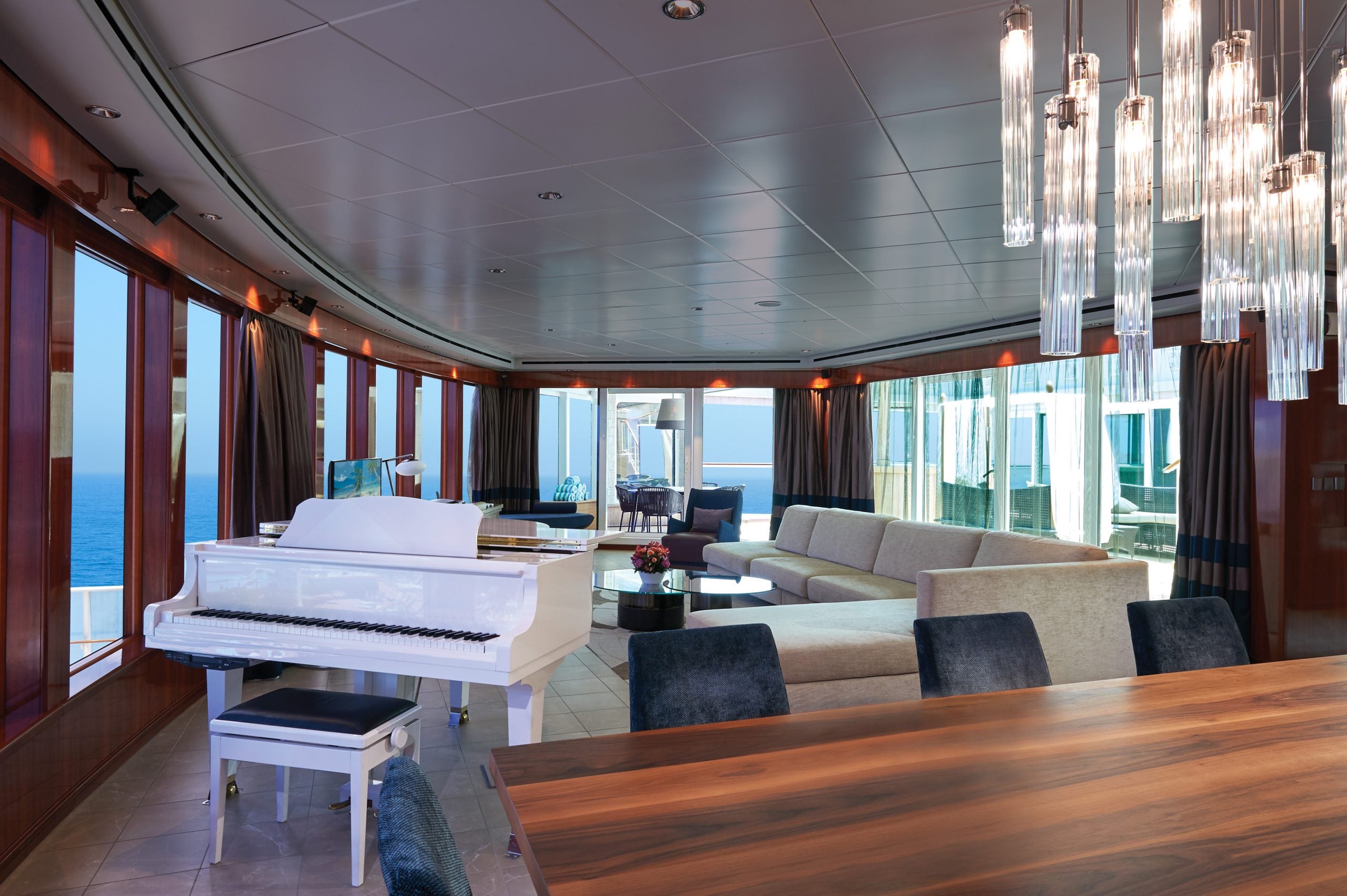 For starters, there are a huge number of cabins available on some Norwegian ships. The line is known for operating some of the world’s biggest cruise vessels — ships so big that some have more than 2,000 cabins each.

However, it’s not just the sheer volume of cabins that makes choosing a room on a Norwegian ship a challenge. It’s also the number of cabin categories.

On some of Norwegian’s newest ships, including Norwegian Encore and Norwegian Joy, there are a whopping 36 different types of cabins — each a little different from the last.

The backstory here is that Norwegian ships are designed to appeal to a wide demographic, including travelers willing to spend at a wide range of price points. That’s prompted Norwegian to offer a wide mix of cabin types.

The room choices the line offers on its ships range from relatively low-cost, windowless inside cabins measuring just 135 square feet (perfect for the budget traveler) to massive, multi-room suites that can be more than 50 times that size.

At the high end, the accommodations are aimed at affluent travelers who, for whatever reason, prefer the megaship experience to being on a luxury ship, and these truly are among the most spectacular accommodations at sea. Some, such as the giant Garden Villas found on six Norwegian ships — Norwegian Jewel, Norwegian Pearl, Norwegian Gem, Norwegian Jade, Norwegian Dawn and Norwegian Star — sprawl over thousands of square feet and have as many as three bedrooms plus separate living rooms and dining rooms.

On newer Norwegian ships, the majority of the cabins are balcony cabins. Cruise lines over the years have discovered that cruisers will pay a significant premium to have a balcony with their cabin, and that’s prompted a rush to add more balcony cabins to ships.

However, Norwegian’s newer vessels are also known for a large number of suites, including suites that are part of upscale private complexes called The Haven.

Here is a breakdown of the cabin types on Norwegian Encore, which is typical for the line’s newer ships:

On older Norwegian ships (and, in general, all older cruise ships), there are fewer suites — sometimes far fewer. Only 1% of the cabins on Norwegian’s oldest vessel, the 1998-built Norwegian Spirit, are balcony cabins.

Inside cabins and oceanview cabins make up nearly half of all cabins on Norwegian Spirit. Here is a breakdown of the cabins on that vessel:

The takeaway here is that you’ll have a tougher time locking down a suite on an older Norwegian ship than on a newer vessel. If you’re planning a cruise on one of the line’s older vessels and a suite is a must, you’ll want to book early to make sure you get one.

Within each of the four broad categories of cabins on Norwegian ships, you’ll find multiple subcategories. Norwegian Encore, for instance, has 16 different types of suites alone, from a Club Balcony Suite Guarantee (Category MX) that measures 249 square feet to The Haven Deluxe Owner’s Suite with Large Balcony (Category H2) that measures nearly six times that amount.

In general, Norwegian cabins have a modern look with clean lines and contemporary furniture, plus lots of storage cleverly worked into the design.

Related: The 5 best destinations you can visit on a Norwegian ship

These are the cabins you stay in when you’re on a tight budget. On any Norwegian ship, they are almost always the least expensive option when you’re booking a cabin, and you can often save considerable money by booking an inside cabin versus an ocean-view or higher-level cabin.

What you’ll give up, of course, is that ocean view. Your room will have four walls and no windows offering a glimpse of the outside world. In some cases, you’ll find an inside cabin with a window opening up onto a hallway, but the view will be of nothing more than the hallway.

Related: Why windowless inside cabins aren’t so bad

Of note, Norwegian is well-known for one particular type of inside cabin: unusually tiny, interior studio cabins designed for solo travelers.

Norwegian first added such cabins to a ship in 2010, on the then-new, 4,100-passenger Norwegian Epic. They were such a hit the line quickly began adding them to more vessels.

Measuring just 100 square feet but superbly designed to maximize storage space, the solo rooms on Norwegian Epic (there are 128 in all) are clustered around an exclusive Studio Lounge with a bar and television area where solos can mingle at daily hosted happy hour gatherings.

Related: I've been on nearly every Norwegian ship. Here are my first impressions of Norwegian Prima

In most cases, these studio cabins have windows that face an interior hallway.

With an ocean-view cabin, you get a window looking out to the sea but not an attached balcony where you can sit outside and enjoy the fresh air.

Norwegian’s newer ships have relatively few such cabins, as generally cabins that face outward are now built with balconies.

Several recent Norwegian vessels have some quite large ocean-view cabins at their fronts that measure from 240 to 372 square feet. Dubbed Family Oceanview Stateroom with Large Picture Window, they are designed to hold up to five people and are marketed to families.

Balcony cabins are what everyone wants these days, and Norwegian is delivering with huge numbers of balcony cabins on all its newest ships.

On the line’s new Prima-class ships, which began debuting in 2022, around 57% of rooms are balcony cabins — and that number jumps even higher if you include suites on the ship that have balconies (see below for more details on suites on Norwegian vessels).

Including suites, the percentage of cabins on Norwegian Prima that have balconies jumps to 64%. The percentage is even higher on the line's newest Breakaway-plus class vessels, at a very high 72%.

Balcony cabins on Norwegian ships typically measure a bit over 200 square feet, including the balcony space, but some can be significantly bigger.

Note that, on a few ships, Norwegian offers special spa-themed balcony cabins. These rooms feature tranquil decor, a luxury bathroom, easy access to the Mandara Spa on the ship and free access to the ship’s thermal spa suites.

As mentioned above, Norwegian is known for a large number of suites on its ships. It’s also known for some of the very biggest suites in the entire cruise industry.

The Garden Villas found on Norwegian Jewel, Norwegian Pearl, Norwegian Gem, Norwegian Jade, Norwegian Dawn and Norwegian Star are truly stunning, with living areas with glass walls looking over the pool areas of the ships. They have as many as three bedrooms plus separate living rooms and dining rooms.

Some of the Garden Villas measure as much as 6,694 square feet — more than twice the size of the typical home in the United States.

On more than half of Norwegian’s ships, many of the top suites are part of an exclusive, keycard-accessed area called The Haven. Aimed at luxury travelers, The Haven complexes are located at the very top of the vessels and often come with private lounges, pools, sunning areas and even restaurants.

Related: 7 reasons to splurge on a cruise ship suite

Depending on the ship, top suites can come with such perks as private butlers and concierges who attend to your every need; access to a private restaurant; a private suite lounge and sun deck; reserved seating in entertainment venues; and priority boarding and disembarkation.

Just be ready to look through a lot of suite types if you’re booking a Norwegian ship. Some Norwegian ships have up to four types of Penthouse suites available, for instance, and three kinds of family suites.

Norwegian has something for everyone when it comes to cabins on its ships.

You can book a small, inside cabin that will get you on board one of the line’s vessels at a very reasonable cost or a super suite that will set you back many times more but that comes with all sorts of perks.