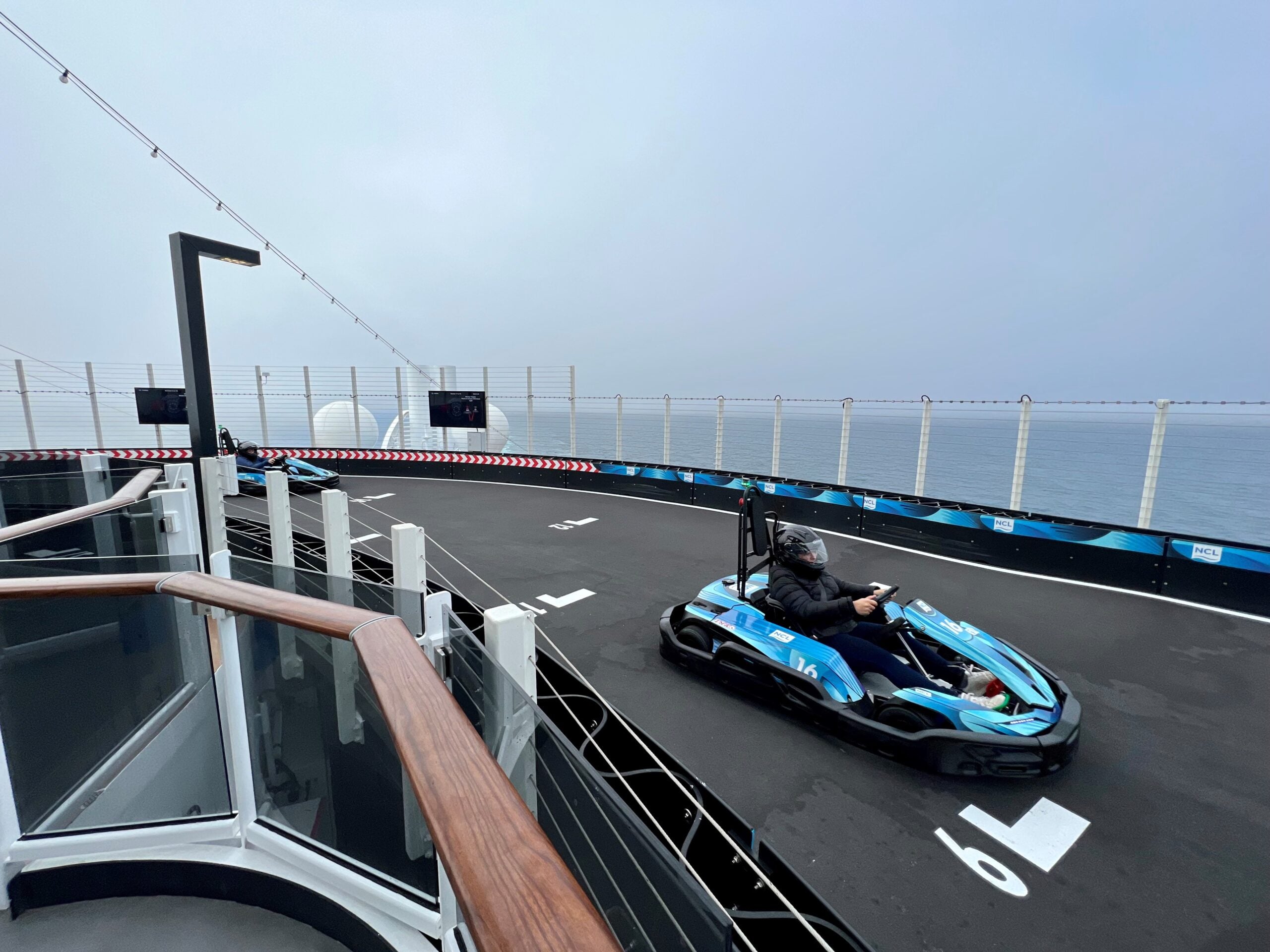 Norwegian Cruise Line's new ship has a ridiculously big go-kart track — here's why I loved it
This post contains references to products from one or more of our advertisers. We may receive compensation when you click on links to those products. Terms apply to the offers listed on this page. For an explanation of our Advertising Policy, visit this page.

Editor’s note: TPG’s Gene Sloan accepted a free trip from Norwegian Cruise Line to attend the unveiling of Norwegian Prima. The opinions expressed below are entirely his and weren’t subject to review by the line.

Here's a prediction: Eventually, the top decks of Norwegian Cruise Line ships will be entirely devoted to go-kart tracks. There will be no waterslides or pools. There won't even be lounge chairs.

You'll just spend all your sea days zooming around and around on curvy roads in miniature race cars.

OK, so maybe that's an exaggeration. But even a casual observer can see where the trend in decktop fun at Norwegian has been going in recent years — and, as oddball as it sounds, the trend is all about go-karts.

Almost every new ship the line has added since the debut of Norwegian Joy in 2017 has had a go-kart track bigger than the last — including the line's newest vessel, Norwegian Prima.

As I'm seeing this week during a sneak peek at the ship in advance of its first sailing with paying passengers, Norwegian Prima has a go-kart track so big it verges on the ridiculous.

Prima Speedway, as it's called, spreads over a significant part of three decks on the top of the ship — a first for the line. Norwegian's previous go-kart tracks only covered parts of two decks.

It's the defining feature of the top of the ship.

This is all the more impressive considering that Norwegian Prima is a significantly smaller ship than the recent vessels Norwegian has built with go-kart tracks. Some elements of the top deck of Norwegian Prima are notably smaller than you'll find on those ships. There's only one waterslide, and the main lounge and pool area has been downsized.

But when it comes to go-karts, Norwegian is not skimping.

I'll admit, when I first heard a few years ago that Norwegian was planning to put a go-kart track on a cruise ship, I rolled my eyes. That can’t possibly work, I thought. And even if it does, who would want to go-kart in the middle of the ocean?

The answer: Way more people than I could ever imagine.

The first three go-kart tracks at sea, unveiled in 2017, 2018 and 2019 on Norwegian’s Norwegian Joy, Norwegian Bliss and Norwegian Encore, respectively, have been huge hits.

The racing "heats" on the tracks inevitably sell out when the rides are open. People line up to make a booking.

And here's where I'll make a confession: Those people lined up to make a booking include ... me.

I may have thought the whole concept of go-karts on cruise ships was inane when I first heard of it. But it turns out that zipping around the top of a ship at nearly 30 miles per hour is a silly amount of fun. And nowhere is it more of a silly amount of fun than on Norwegian Prima.

As I experienced Sunday during an eight-lap test run on Prima Speedway, the extra deck devoted to the attraction makes it more thrilling than any of its predecessors on other Norwegian ships.

The track rises two decks at times and spins around on itself before descending and rising again, like one of those crazy freeway interchanges you see in the Los Angeles area. Even at slow speeds, the many sharp turns (there are 14 turns in all) make for exhilarating moments.

The track also has been souped up with a new, bigger observation area at its very top, and there's now a dedicated, open-air Prima Speedway bar built into the complex, where you can boast of your driving exploits and reward yourself with a cold brew after your heat.

Maybe it's because of the bigger size of the complex, but on this new track in particular, I found myself becoming oddly competitive. Channeling my inner Earnhardt, I jammed down the green “gas” pedal of my car to the floor, hoping to blast past all the other cars for the win.

Alas, when all was said and done, I finished toward the bottom of my heat.

I put “gas” in quotes above because, unlike many go-karts on land, the cars that Norwegian is using on Norwegian Prima don’t use fossil fuels. While they rev and roar like regular gas engine cars, they’re electric-powered. The noise that they make is all a simulation.

Still, don’t think for a minute they’re not serious go-karts. The cars can hit speeds of up to 27 miles per hour on the track, making for a rip-roaring experience. Technically, the cars can go even faster — more than 50 miles per hour — but Norwegian has restricted them a bit for safety.

Perhaps the only bad news about the new go-kart track on Norwegian Prima is that rides aren't as cheap as they used to be on Norwegian's other ships. A few years ago, when there only were go-kart tracks on Norwegian Joy and Norwegian Bliss, a single ride cost $7. With demand sky-high, the line soon raised that fee to $9.95, and with the debut of Norwegian Encore in 2019, the cost shot up to $15 per ride.

It'll remain $15 per ride with the debut of Norwegian Prima.

New for Norwegian Prima, the line also is adding a "You And The Track" single-rider experience where you get to zoom around the speedway for three laps with no one else on the course. For this experience, the speed restrictions that have been imposed on the cars will be lifted so that you can hit speeds as high as 40 mph. It costs $20 per ride.

If you’re the kind of person who can’t get enough of go-karting (or, more likely, you have a kid who loves the track), you soon will be able to buy a weeklong, all-you-can-ride pass. The pricing for this has yet to be set. When Norwegian offered this before at the race tracks on its other ships, the cost was $199 per person.

It sounds like a lot of money. But after testing Prima Speedway this week, I can see the allure, particularly for people like me who have kids. The next time I'm on a Norwegian ship with my kids, I might just buy it.

Not for them, but for me. Even adults need an escape sometimes.

TPG's Gene Sloan is reporting live from Norwegian Prima as it sails from Reykjavik to Amsterdam on a non-revenue preview voyage for media and travel agents. You can find all of his dispatches on his author’s page.

Featured image by Norwegian Prima Speedway. (GENE SLOAN/THE POINTS GUY)
Editorial disclaimer: Opinions expressed here are the author’s alone, not those of any bank, credit card issuer, airline or hotel chain, and have not been reviewed, approved or otherwise endorsed by any of these entities.