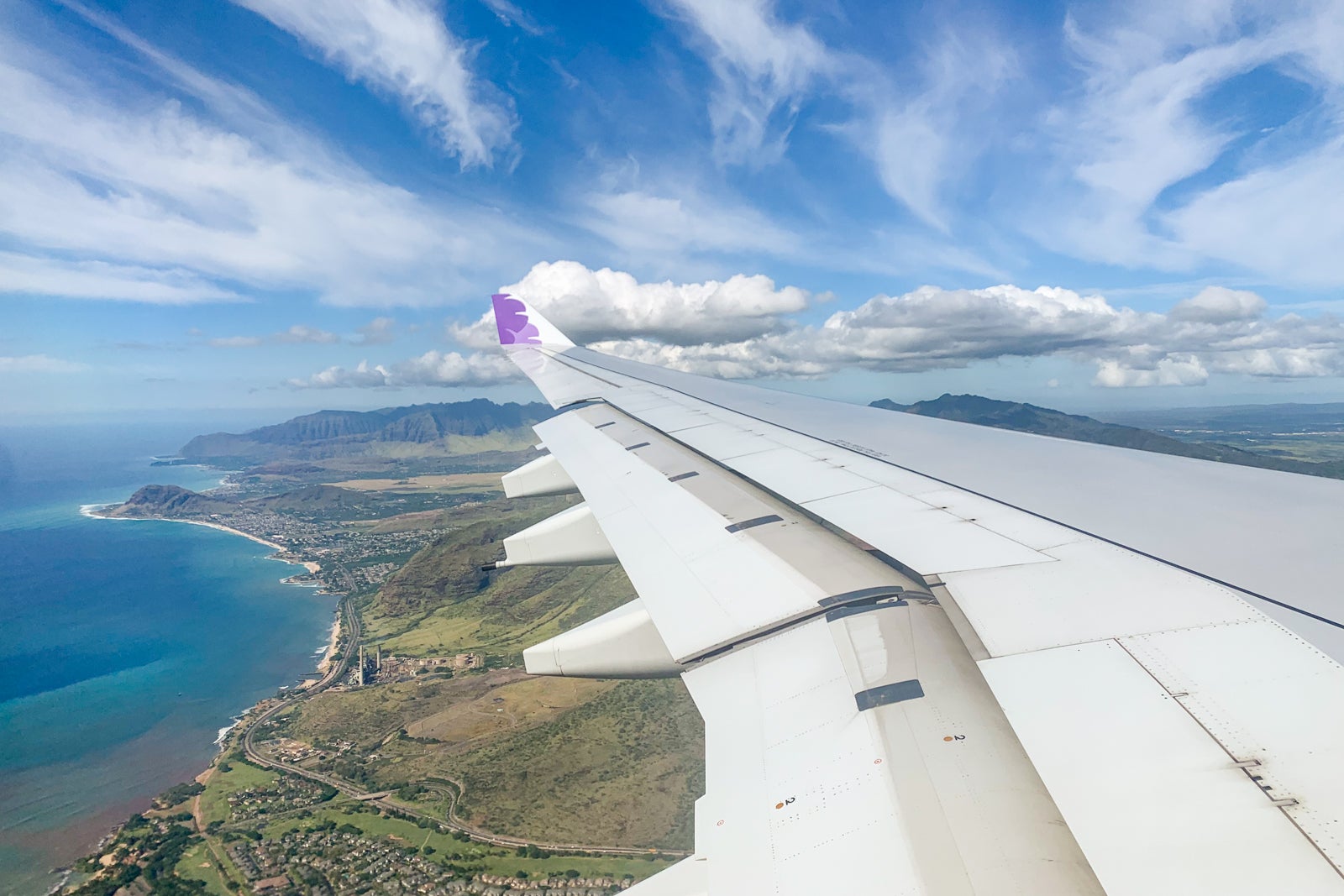 The pandemic has forced airlines to change the flight experience from beginning to end. There are new procedures at the gate, seating assignment changes, reduced food and beverage services in the air and in the lounge and, of course, new face mask requirements.

And while the number of people up in the air may be on a slight decline once again, there are still plenty of travelers wondering what they should expect on upcoming trips.

Take Hawaiian Airlines, for example. Are those onboard mai tais still relaxing when you're contending with face masks, disinfecting wipes, COVID-19 tests and general pandemic-induced anxiety?

Here's what you need to know about flying with the state's flagship airline right now.

For more travel news and advice from TPG, sign up for our daily newsletter.

You may need to take a test before you fly

These days, your travel experience with Hawaiian Airlines begins before you get to the airport. Hawaii is currently requiring a 10-day quarantine (previously 14 days) upon arrival — unless you're traveling to an island participating in the state's pre-arrival testing program. Not all islands are participating (Kauai, for example, does not allow travelers to opt out of the required quarantine even with a negative COVID-19 test). If you do hope to avoid a strict 10-day quarantine, you'll need a negative COVID-19 test taken within 72 hours of departure from a trusted testing partner.

Hawaiian Airlines offers a tool to help potential travelers search for trusted testing partners by departure city to help cut down on confusion and time spent researching. I personally ordered an at-home test from Vault, but keep in mind that shipping delays could throw a wrench in your travel plans. Whenever possible, I'd recommend finding an in-person testing location for your trip.

The Hawaiian Airlines website also lists information on interisland travel (rules and procedures for testing and quarantine requirements may vary by county) and international travel from Japan.

There are enhanced cleaning procedures

Like many airlines, Hawaiian Airlines has upped its cleaning game to help keep flyers and flight crew safe.

The airline was one of the first to adopt electrostatic spray disinfecting policies. Each night, aircraft on the U.S. West Coast undergo a deep clean before they head back to the Aloha State in the mornings. And every aircraft (including those that fly interisland and international routes) are disinfected after each flight and given an electrostatic spray treatment at least once daily.

Hawaiian Airlines facilities that may not see passengers but do see employees daily are also more thoroughly cleaned.

Like many other airlines, the Hawaiian Airlines gates I saw in San Francisco (SFO), Honolulu (HNL) and Maui (OGG) had plexiglass barriers between gate agents and customers.

There were also social distancing dots line the floors to help promote customer spacing at gate areas. And while the gate area didn't have blocked off seats, I was pleasantly surprised to find most guests practicing social distancing while waiting at the gates. While families and couples would sit together, groups generally had at least three or four seats in between them. And with fewer flights operating in and out of Hawaii the moment, there were nearby gate areas with space to help people spread out.

One of the policies Hawaiian Airlines has adopted that I hope remains permanent is the new boarding process. Currently, flights are boarded by row from back to front rather than via the old boarding pass zones. United and Delta have both adopted similar policies.

This helps minimize the risk of having a lot of people walk past you once you're settled into your seat. The exceptions to this are first-class cabin guests who can still board at their leisure and those who need additional time and assistance to board the aircraft.

Upon landing, guests were asked to stay seated until the row in front of them had deplaned.

When exiting the plane, passengers were directed to a check-in area as part of the Safe Travels program. The line moved quickly (and airport employees helped ensure people in line kept a safe distance between each other), and I was able to get through the entire process in Honolulu in under 10 minutes.

Related: Preboarding screenings and new cleaning procedures: How US airlines are working to keep flyers healthy

As with all major U.S. airlines, you have to wear a mask for the duration of your Hawaiian Airlines flight unless you are actively eating or drinking. Masks must cover the mouth and nose, and face coverings with vents, exhalation valves, mesh and similar materials are not allowed. Children under the age of 2 are exempt from the policy, and those with medical conditions and disabilities that prevent them from wearing a mask can complete an assessment with a medical professional prior to boarding at the airport.

Flights from the U.S. mainland to Hawaii are at least five to six hours long, and much longer from the East Coast. While that may sound like a long time to wear a face mask, however, it really is so second-nature now it wasn't an issue.

From what I could tell, others were being compliant with mask policies and social distancing measures. Because flights were far from full, it was easy for passengers to spread out. Flight attendants helped direct people to new seats if they were in a row near others and wanted to be farther away from people. Of course, masks were taken off to eat during meal service, but I didn't feel as if anyone was abusing that policy to avoid mask compliance.

My flights to and from San Francisco to Hawaii were both fairly empty, which means everyone on board was able to space out and really maintain a comfortable distance between passengers.

Because of the new boarding policies, it was a quick walk directly to my economy seat. At boarding, I was greeted by a mask-wearing Hawaiian Airlines flight attendant and given a disinfectant wipe for my tray table and seat. Overhead space was widely available with fewer people on board, and flight attendants were mindful to keep people spread out while we got situated.

The flights themselves were enjoyable, even in economy.

At the time of my flight in early December, Hawaiian Airlines was still blocking middle seats (which officially ended Dec. 15). That, combined with low demand on my flight, meant I got an entire row to myself. The airline no longer offers pillows and blankets for North American flights, but I brought a hoodie and was fine with my own trtl travel pillow.

Hawaiian Airlines does have seatback entertainment on its A330s, but no Wi-Fi. I had downloaded a book to read on my iPad, so I didn't mind being unplugged for the five-hour flights. But that may be an important consideration for anyone who usually works while in the air.

Every guest receives a complimentary bottle of water during boarding. In first class, meals come on one tray rather than as multiple courses. And you'll notice the beverages offered have been reduced slightly — open-pour drinks such as coffee and tea aren't currently available in the main cabin and alcohol sales have been suspended — with the exception of the longest flights between New York-JFK and Boston (BOS).

While the in-flight experience may look a little different these days, my flights were both enjoyable. I was able to spread out a bit and get some reading done without worrying about people too close to my own personal space.

Middle seats will no longer be blocked

Hawaiian Airlines was one of the major U.S. airlines that made the decision to block middle seats.

On both of my flights, I had a row to myself, which made the flight experience more enjoyable and safer. While I didn't encounter anyone on any of my flights who wasn't following the proper mask policies, having that buffer between myself and others provided another layer of safety and personal peace of mind on the flights.

Unfortunately, middle seats are no longer being blocked. However, it is possible some flights will still benefit from reduced travel. This means you may still be able to book a flight where you score an empty row in economy, but that's no longer a guarantee.

Lounge and airport amenities may not be available

Food in the lounge now comes individually wrapped and there are new social distancing policies in place within the open lounges. Of note was that most shops and restaurants at both the Honolulu and Maui airports were still closed when I was there. For example, in Honolulu, only Burger King and Starbucks were open within the airport.

Since most of the Hawaiian Islands have reopened to leisure travel, Hawaiian Airlines is likely on more travelers' minds than it was even a few months ago.

If you plan to fly Hawaiian, know that some services have resumed, and blocked middle seats are no longer guaranteed. You also may find that some lounges have not reopened, and those that have reopened will have reduced offerings.

"Hawaii is our home, and at Hawaiian Airlines, it's at the root of everything we do," said Jeff Helfrick, vice president of airport operations at Hawaiian Airlines. "It's important not only that we take care of our island home, but also that we do it right."

As a first-time Hawaiian Airlines flyer, none of the pandemic-related adjustments negatively affected my personal flight experience. It was obvious that the flight attendants and gate agents remained dedicated to sharing the Aloha spirit and providing an enjoyable flight both to and from paradise.

Our points-obsessed staff uses a plethora of credit cards on a daily basis. If anyone on our team wouldn’t recommend it to a friend or a family member, we wouldn’t recommend it on The Points Guy either. Our opinions are our own, and have not been reviewed, approved, or endorsed by our advertising partners.
See all best card offers
Related stories
News
No more plastic cups for Alaska Airlines
News
Earn American Airlines Loyalty Points and miles through the AAdvantage shopping portal
Guide
11 things you should never buy on a cruise ship (or in port)
Reviews
A luxe boutique hotel with authentic Spanish style and verve: Thompson Madrid