From Connemara to the Giant's Causeway: 9 of the most beautiful beaches in Ireland

Articles
Hayley Coyle Hayley Coyle is the Features Editor for The Points Guy U.K. She is a former tabloid newspaper journalist and is currently renovating a cottage in Yorkshire and baking enormously fattening cakes. Not at the same time.
July 05, 2020
•
9 min read 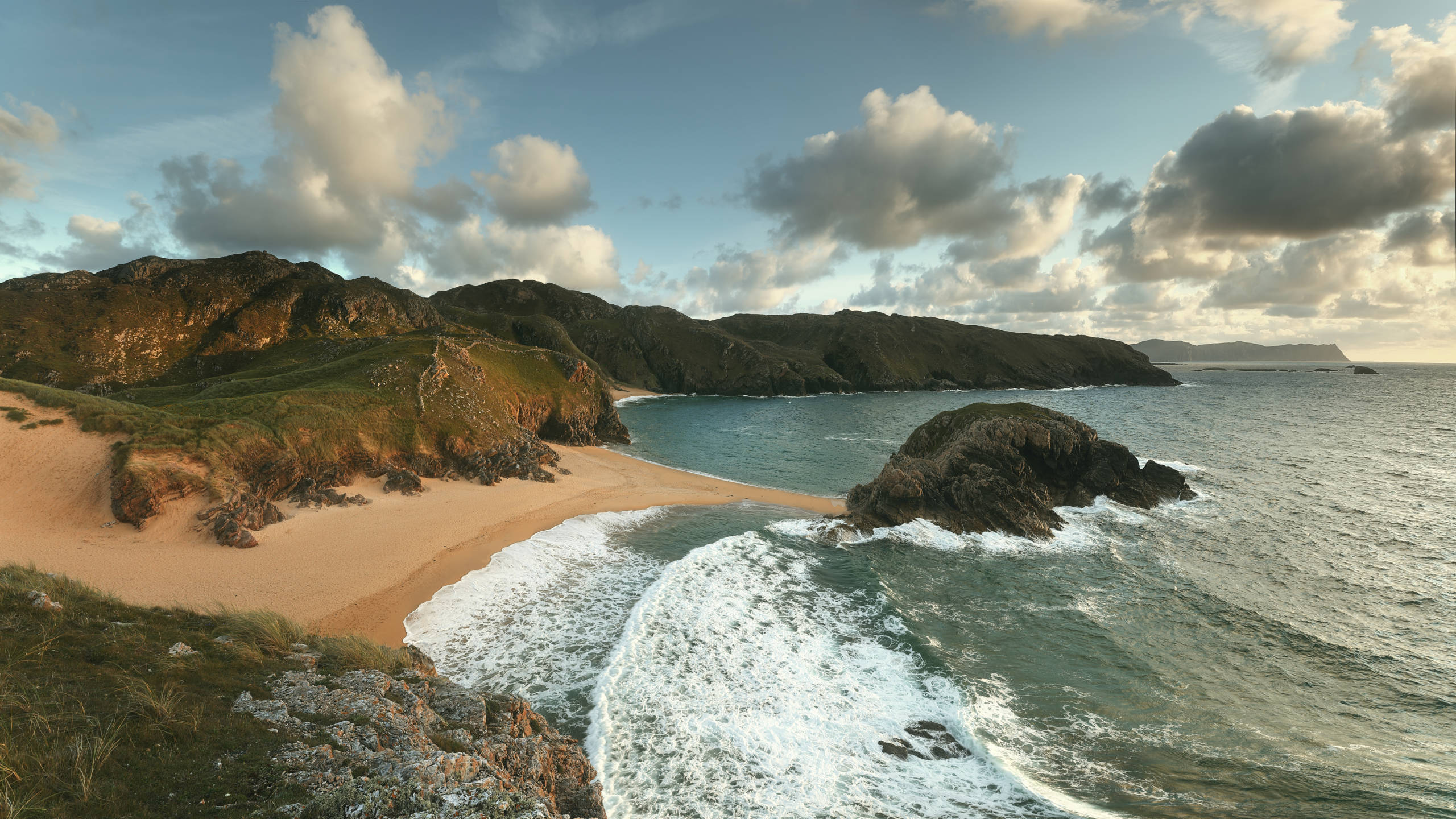 Editor’s note: The team at The Points Guy loves to travel, but now is not the time for unnecessary trips. We are publishing travel deals and destination content because we should all use this time to think about and plan our next adventures.

The coast of Ireland is something spectacular to behold -- rugged, treacherous, dramatic but beautiful. Irish beaches may not be for the faint of heart when it comes to swimming — it's very cold — and you may become quite wind-swept. But there are some seriously stunning beaches to be found around the Emerald Isle, both in Northern Ireland and the Republic of Ireland.

While we navigate the restrictions on travel that coronavirus has created, we can plan our next trip, and perhaps think about a future trip to Ireland to experience all this magical country has to offer -- including, of course, its beaches.

Inch Strand is three miles of glorious sand and dunes that juts into the sea on the Dingle Peninsula in Kerry, on the southwest coast of Ireland. It's popular with surfers, swimmers and anglers and was the location for the 1970 film Ryan's Daughter. It's also safe for numerous water sports including kayaking, windsurfing and kitesurfing due to its low gradient. There are some lovely B&Bs dotted around the area and plenty to explore.

How to get there: The nearest airport is Kerry Airport (KIR) and then it's roughly a 30-minute drive. Cork Airport (ORK), which is bigger, is a two-hour drive. The best way to get around Ireland after flying there is by car. But as it's such a small country, attractions are never that far away.

Achill is Ireland's biggest island and is off the coast of County Mayo. Keem Bay is a bit of a hidden gem, surrounded by cliffs and said to be one of the most "picturesque bays in Ireland." To get there, you have to traverse a twisty route on the side of the Croaghaun mountain. This spot is super remote, so also a wonderful retreat. Keem Bay was also a former shark fishing area in the fifties and sixties.

How to get there: The nearest airport is Knock Airport (NOC), that serves western Ireland, and Keem Bay is a one-hour and 45-minute drive and then a short boat ride.

This two-mile-long beach in Northern Ireland is one of its most popular attractions with 180,000 visitors a year. It's one of the few beaches in Ireland where cars have access, so it's ideal for families with loads of things to cart. The beach is located between Portstewart and the mouth of the River Bann. As well as swimming, you can enjoy scenic walks, horseriding and surfing. Nearby accommodation includes holiday parks offering caravans and tent pitches, traditional B&Bs and luxury self-catering accommodation, and there's also a nature reserve in nearby Barmouth.

How to get there: The nearest airport is Derry Aiport (LDY), then a half-hour drive.

Inchydoney is a small island off the coast of West Cork, connected to the mainland by two causeways. It has two stunning and popular beaches, on either side of the Virgin Mary headland. The tide goes very far out during low tide, making it even more expansive, and there's plenty of room for kitesurfing, as well as a surf school. You may not associate Ireland with surfing, but you certainly can -- it's just extremely cold, so a decent wet suit is mandatory. To stay, there's the luxurious Inchydoney Island Lodge & Spa, which offers seaweed therapies as well as delectable seafood and lovely rooms.

How to get there: The nearest airport is Cork, and then it's a 45-minute drive.

Streedagh Strand has amazing views of the mountains of Donegal and big, big skies. It's also close to the flat-topped rock formation called Benbulben where the famous Irish poet W.B. Yeats is buried. It's great in the winter for hearty, blustery walks and is very quiet, remote and peaceful. The strand is an exposed beach with reef breaks, which create ideal surfing conditions all year round (remember your wet suit!).

How to get there: The nearest airport is Knock, then about a one-hour drive.

Dog's Bay has been described as one of the "finest beaches in Ireland" and is situated close to the village of Roundstone in the Connemara region of Galway. It is a spectacular horseshoe shape with more than a mile-long stretch of white sandy beach. The area has international importance for its rare and interesting ecological, geological and archaeological features, according to Discover Ireland. Connemara is also part of the Gaeltacht area of the country, where Gaelic is the native language and where's there's a strong focus on Irish culture and heritage. After a day at the beach, head to the nearby Roundstone House Hotel for a pint and a slice of its famous banoffi pie.

How to get there: Shannon Airport (SNN) is the closest, then it's a fairly long two-hour and 20-minute drive.

Not only is Curracloe Strand a long, sandy haven with dunes and a rich shellfish life (think delicious oysters, mussels, cockles and scallops to be gobbled at nearby eateries), it's also famous for being the location for the harrowing D-Day scene in Saving Private Ryan, as it's similar in appearance to Omaha beach in Normandy. The strand is also a top spot for bird watching and tourists always cite its good facilities for families.

How to get there: The nearest airport is Dublin Airport (DUB), then a one-hour, 40-minute drive by car.

Access to this picture-perfect beach is via a floating bridge from the car park and on really sunny days (yes, these do occur in Ireland sometimes!), the turquoise waters could rival the Caribbean -- the water temperature will certainly not though. It's situated close to Mizen Head on the Mizen Peninsula and the big waves are perfect for surfing. There are also large shallow areas ideal for children and the beach is backed by sand dunes, which were thrown up in the tidal wave that swept Europe after the earthquake in Lisbon in 1755. A selection of quaint Airbnb rentals are also nearby.

How to get there: Cork or Kerry Airport then about a two-hour drive from each.

This small seaside village is just two miles from the famous Giant's Causeway and only has a tiny population of around 734, according to the last Census, and the village has been described as like "stepping back in time." The beach is made of sand and shingle and surrounded by grassy cliffs with incredible views of the Atlantic. Portballintrae also has a rich history. In 1967 a team of Belgian divers discovered the wreck of the ship La Girona and brought up the biggest collection of shipwrecked treasure from the 1558 Spanish Armada, ever. The Girona's recovered gold jewelry is on show in the Ulster Museum, Belfast. We recommend staying at the Bay View Hotel, a four-star haven on the Causeway Coast. Stylish rooms, great food and stellar views.

How to get there: The nearest airport is Belfast Airport (BFS) then a one-hour drive.

Ireland is known for its Guinness, music, poetry, friendly folk and of course, being green. But as an island, it has miles of coastline that is perhaps overlooked. Its beaches may not offer the calm, warm seas of the Mediterranean or the white sands and palm trees of the Caribbean, but they are magnificent in their own right. When the time comes when we can travel again, be sure to add them to your bucket list. Slainte!