From cleaning robots to plastic barriers, what to expect the next time you're at the airport 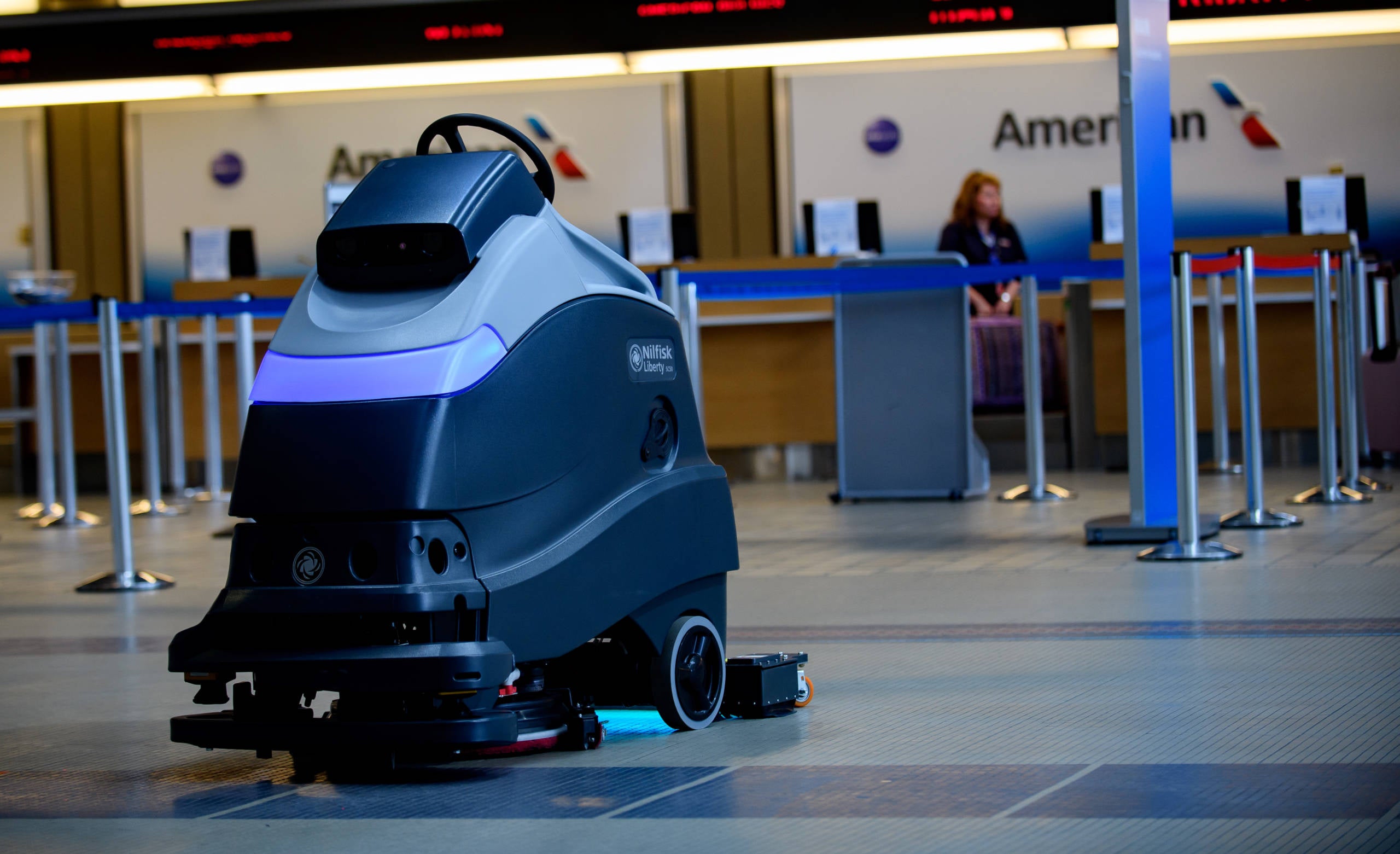 Few sectors have been hit by the novel coronavirus harder than the aviation industry.

Air travel plummeted to just 5% of the normal volume. On April 14, the Transportation Security Administration (TSA) screened only 87,534 passengers, compared to over 2 million on a normal day. Travel is slowly starting to pick up — passenger counts have been on the rise, with more than 200,000 passengers screened a few times in recent days — but the busiest air travel day in the U.S. since the pandemic caused life to screech to a halt still represented just 8% of the normal volume of air travelers. The numbers depict a stunning drop in demand.

Now, as the normally very busy summer season arrives and stay-at-home orders begin to expire or loosen, airports are preparing to welcome travelers back to the sky in a very new reality. The airport, once notorious for snaking lines, crowded lounges and a crush of humanity waiting to board all at once, may now become a place of high-tech cleaning robots, plastic shields, temperature screenings, mandatory face masks and reduced amenities.

Related: What it is like to fly in the U.S. during coronavirus

“Public safety and security are always the top priorities," Christina Cassotis, CEO of the Allegheny County Airport Authority that runs Pittsburgh International (PIT), said as that airport rolled out its "PIT Safe Travels" initiative. Pittsburgh's airport described the program as an effort to "help increase confidence in air travel through enhanced protocols that outline best practices for reducing the spread of germs."

It's a challenge airports across the country will face in the coming weeks, especially as coronavirus-related changes add new wrinkles to the flying experience at a breathtaking pace. And more changes are almost certainly on the way. One possibility: The TSA could begin administering temperature checks in addition to screening bags. If, when and where that would happen remains unclear, but it underscores the evolving landscape travelers face during the pandemic.

For now, airports are scrambling to stay ahead of the curve to make travelers feel welcome. Here's what you can expect at airports in the coming weeks — and don't forget to double-check which terminal your airline is flying from, as several airports have temporarily consolidated operations during the pandemic.

Forget the old yellow mop and bucket on wheels you saw parked outside the airport bathroom. That will no longer cut it. Pittsburgh International recently became the first airport in the U.S. to deploy two robots with UV-C rays to clean and disinfect the floors in high-traffic areas.

Even the air now needs to be cleaned, it seems. Long Island MacArthur Airport (ISP) became the first airport in the world to install systems that continuously sanitize air and surfaces in the airport’s facilities. Called CASPR (Continuous Air and Surface Pathogen Reduction), it delivers trace levels of hydrogen peroxide (H2O2) to the air in indoor spaces to (hopefully) scrub it clean of pathogens.

On a more ground-level approach, more than 250 additional hand sanitizer stations were added at Los Angeles International (LAX). Here, public areas and restrooms are also being cleaned at least once per hour. Expect to see similar efforts rolling out at airports around the nation.

Many airports, including Orlando International Airport (MCO), are readying for the hopeful return of travelers by installing new acrylic protective screens at ticket counters and at retail and food outlets. Work on these screens has already begun at the Orlando airport, according to Carolyn Fennell, who's with the Greater Orlando Aviation Authority. These barriers can be found in the gates the airport manages, as well as locations directly managed by the airlines.

On May 4, Orlando saw its daily passenger count drop to 4,848 departing passengers, compared to the original pre-pandemic projection of 78,725. As Disney World and other area theme parks continue to work toward a phased reopening, however, that number could increase at a rapid clip in the coming weeks and months.

We've all checked into a flight, and perhaps even printed boarding passes and bag tags, using those ubiquitous self-service kiosks throughout airports worldwide. Despite being self-service machines, kiosks are traditionally very high touch point areas. But, even that's changing.

At select airports, you can now print your United bag tags at a kiosk while keeping your hands clean and practicing social distancing. You'll simply scan a boarding pass on your mobile device or via a copy you printed from home. When you're done printing and attaching your luggage tags, you'll proceed to drop your own bags at the designated location.

Related: How coronavirus may change the future of travel

It's not just airlines requiring passengers (and crew) to wear face masks — some airports are mandating personal protective equipment as well. For example, Los Angeles (LAX), San Francisco (SFO) and San Diego (SAN) are requiring masks for all airport occupants. Others will begin doing so soon, such as Pittsburgh, which says everyone will be required to wear masks anywhere on airport property starting Monday, May 18.

Don't be surprised if mask requirements become universal, at least in the short term. That's the goal of Airports Council International – North America (ACI-NA), the trade group that represents commercial airports in the U.S. and Canada. It called on the U.S this month to require "facial coverings" for "all individuals in the public areas of passenger airport terminals."

So far, there's been no action by the government on that front, but mask usage is recommended by most health experts. Here's where you can buy a face mask for yourself (and even your kids) before your next trip to the airport.

And, if you're in Las Vegas, the city's McCarran International Airport (LAS) is even selling N-95 masks by for $8.25 via a vending machine. Other airports TPG spoke with are also considering the installation of similar airport vending machines.

Masks and hand sanitizer are one thing, but across the ocean, Hong Kong International Airport (HKG) is trialing a full-body disinfection booth for staff. This chamber puts an antimicrobial coating on the skin and clothes of the person in the booth within 40 seconds. Of course, this would only disinfect surfaces, and would not prevent a potentially infected person from spreading the virus.

While so far this method has only been used to disinfect select staff members, its future use for passengers has not been ruled out.

The odds are high you're not going to be in a security line jammed right up against other travelers anytime soon. The TSA website indicates it's implemented procedures to increase social distancing and reduce direct contact between employees and the traveling public whenever possible. This includes metering passengers to increase the distance between individuals; placing visual reminders of appropriate spacing on checkpoint floors; and staggering the use of lanes in the security checkpoint where feasible.

TSA agents also now wear masks, and passengers can wear masks in the TSA line, except when having documents checked. The use of technology already available at a number of airports that allows TSA agents to process passengers using only an ID (and not a boarding pass), may also expand and be tweaked so officers don't need to physically touch any documents.

Aside from the possibility the agency might check flyers' temperatures, travelers should expect other changes such as plexiglass dividers, though availability may vary by airport.

Getting your temperature taken at the airport may become as common as having your blood pressure checked at the doctor's office. Just as individual airlines have led the charge requiring passengers to wear masks, Frontier Airlines will become the first U.S. carrier to require temperature checks for passengers using touchless thermometers on June 1. A temperature of 100.4 or higher means you'll be denied boarding.

Already, Air Canada is requiring all passengers to submit to temperature screens. And while temperature screening may only be required by some individual airlines right now, airport-wide tests could come in the near future.

Social distancing is going to remain in our vernacular for the foreseeable future, and that includes at the airport. Exactly what travelers will see will vary by airport, but efforts are already underway from coast to coast.

At Washington Dulles (IAD), for example, some tables have been removed from food court areas to allow for more space between seated customers. For now, sit-down restaurants remain closed because of local mandates, with airport spokesperson Christina Saull telling TPG "there’s an emphasis on grab-and-go availability."

Other airports have taken measures to give flyers more space. Pittsburgh has removed or repositioned furniture and seating in gate, food court and baggage claim areas. In California, Oakland International (OAK) has adjusted seating in gate areas. The Orlando airport, thus far, has not adjusted gate seating, but has increased signage emphasizing the importance of social distancing throughout the airport.

For passengers picking up checked luggage, Taylor said the airport is "determining a layout plan for the Airport’s baggage claim areas" during the pandemic. In the meantime, Oakland has placed social distancing markers are on the floors to promote social distancing there.

The airport is just one part of the puzzle facing the aviation industry as it grapples with how to safely bring back travelers. But it's an undeniably important step in the process.

For now, airports have the luxury of space and time, as only a small fraction of the normal number of travelers are passing through the terminals and boarding gates. But as summer quickly approaches, and travel restrictions presumably continue to ease, the cleaning robots, air sanitizers and mask-wearing humans keeping our nation's airports running will have their work cut out for them.