Tour Suites, Business and Economy on Emirates' 100th Airbus A380 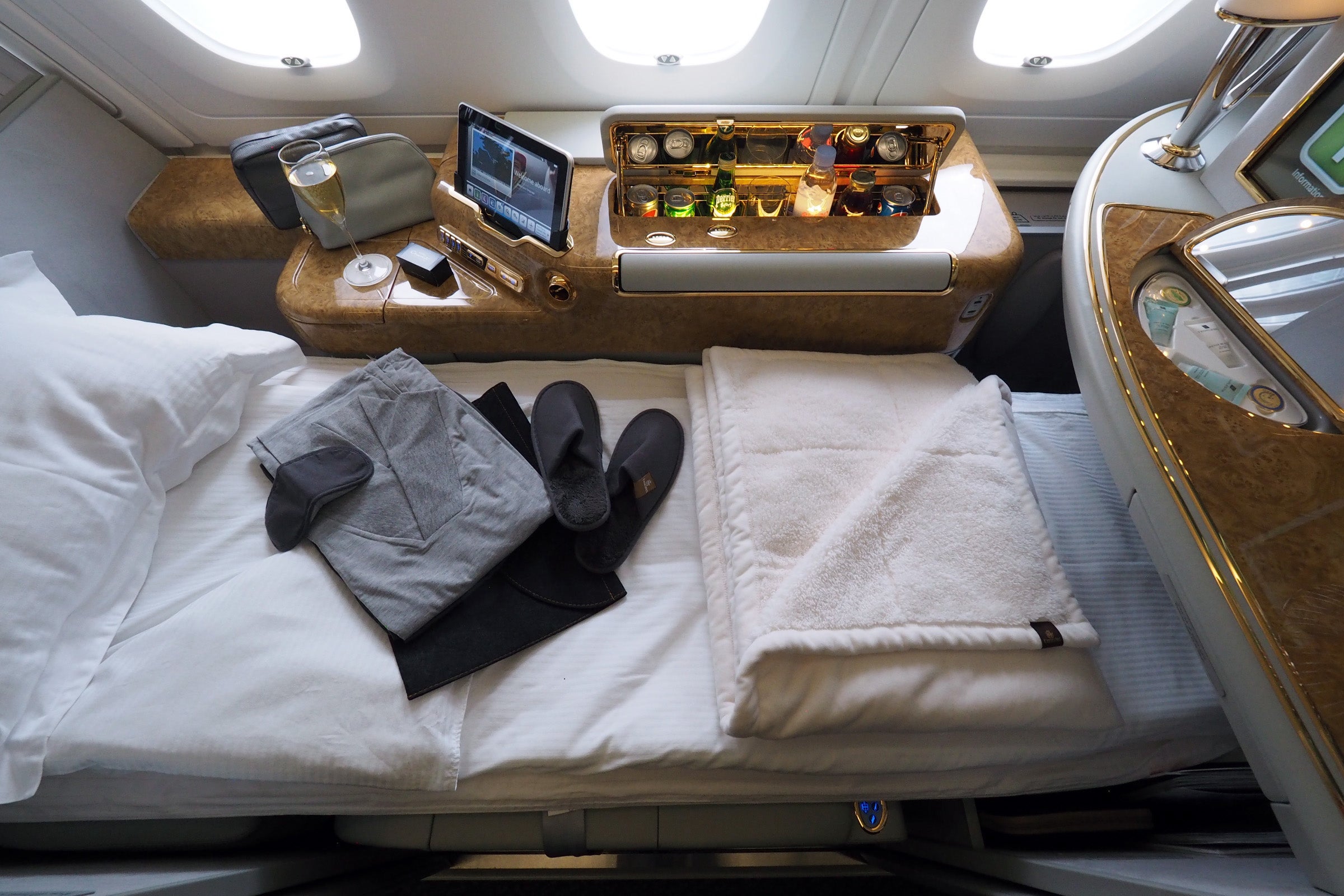 I'm a sucker for brand-new planes. Sure, I'm an AvGeek in the traditional sense, but I also "geek out" over fancy seats and amenities, especially when it comes to overcoming engineering hurdles by successfully implementing imaginative design.

Emirates blew us all away when it introduced first-class suites and onboard showers nearly a decade ago, and, believe it or not, that exact same product continues to roll off the factory line today — albeit with some relatively minor modifications. I've flown first class on Emirates' A380, as have TPG, other members of the team and countless readers.

So before you get too excited, I want to be clear — this post today outlines the same product we've covered numerous times before. But given the occasion of Emirates' 100th A380 delivery this past Friday, I decided a full tour was in order. This is also one of the very first planes to feature Emirates' outstanding new upper-deck bar, which you can see detailed here.

And now, without further ado, let's take a look at the airline's 100th superjumbo plane, starting at the front of the upper deck.

A first-class flight on Emirates' A380 is a bucket-list item for many frequent flyers. Fortunately, availability is generally fantastic, but don't expect to be able to use your American, Delta or United frequent flyer miles to book one of these coveted suites. You do have a handful of options though, bringing suites within the reach of many credit card power users — especially those with loads of transferrable points.

Until I flew Emirates first class earlier this year, I was pretty overwhelmed by all the "bling" — it's definitely a bit ostentatious, sure, but after actually flying the product I didn't feel like it was too over the top.

When it comes to space to stretch out, there isn't much by A380 standards, due in part to this being one of the very first superjumbo products to launch. Each of the 14 suites feature a sliding door, and center seats have a partition in the middle as well. Still, if having room to move about is your top priority, I'd definitely recommend the Etihad Apartment over Emirates first class.

I actually find the Suite to be quite tasteful, believe it or not — although it often comes across as being gaudy in photos.

First-class passengers definitely travel in luxury, with amenities galore — from high-end toiletries to pajamas and even a mini-bar and snack basket.

But the highlight for me is the first-class shower — there are actually two of them on each A380, and they're staffed by dedicated shower attendants that keep them refreshed between each use.

The shower suites double as regular lavatories as well — you don't have to worry about there being enough room to change into your PJs in here!

And then there's the shower itself. I found the water pressure to be surprisingly decent, and while you're limited to five minutes of running water, you can start and stop the flow — and the clock — as often as you wish.

While I have yet to fly business class on Emirates' A380, I'll finally have my chance when I make my way from Seoul (ICN) to Dubai (DXB) next week. TPG Associate Editor Emily McNutt thoroughly enjoyed her experience though.

If you didn't know any better, you might mistake business class for first, given the crazy finishes in the business-class cabin.

These are very much business-class seats, though — they're plenty comfortable, but they're a far cry from the suites up front.

There are a whopping 76 business-class seats on the A380, and they occupy most of the upper deck, with a gigantic cabin in the center of the plane and a smaller mini-cabin just before the business-class bar.

Unlike most of the seats on Emirates' 777s, all business-class seats on the A380 lie completely flat.

Some of the first-class amenities have made their way here, such as the integrated mini-bar and detachable tablet controller.

There's no reason to fix a drink at your seat, though — just head on back to the fantastic staffed bar. You can get a feel for the new space in the video below.

I love the redesigned bar — while just seven A380s are currently flying with the latest version, the older bar is certainly worth your time, too.

My favorite feature would have to be the four-person booth on the port side of the plane. I mean, how cool is this?!!!

There's plenty more to see when it comes to the new bar — don't miss the full tour here.

While the upper deck is dedicated to the plane's two premium cabins, if you head downstairs you'll find nothing but coach.

There are 426 economy seats spread between four cabins on the main deck.

Seats are arranged in a 3-4-3 configuration, but since the A380 is wider than the Boeing 777, each seat is a full inch wider than what you'll find on 777s with the same seating arrangement.

Emirates' current generation of the A380 offers the largest IFE screens I've seen in economy — they measure 13.3 inches and occupy nearly the entire width of the seat.

Emirates is by far the largest operator of Airbus A380s — the carrier has a terminal dedicated to A380 operations in Dubai, and currently flies the superjumbos to nearly 50 destinations around the world.

Emirates offers this handy A380 routes list, so I recommend starting there if you're looking to book an A380 flight. As far as US service goes, the airline typically flies the A380 between New York (JFK) and Dubai and Milan (MXP), as well as Dubai to Washington, D.C. (IAD), Los Angeles (LAX) and San Francisco (SFO).

While Emirates' A380 is still a joy to fly, there's no question that after almost 10 years, the airline has some catching up to do. Etihad flies its superjumbos from just a few miles down the road in Abu Dhabi (AUH), and customers looking to travel to and from the UAE may opt for the Apartment instead. Meanwhile, Singapore's outstanding new Suites product is far more attractive, even though there isn't a shower onboard.

That said, just about a week from today we'll know what to expect from the next generation of Emirates' first-class suites, when the airline hosts an unveiling ahead of the Dubai Air Show. That new product will come to the 777-300ER first, and I hope to see it on the Airbus A380 shortly after that.