Articles
Nick Ellis joined The Points Guy in 2016 as an intern and is now Reviews Editor, primarily responsible for arranging, writing (some of), editing and publishing reviews of hotels and airport lounges along with helping manage, write and edit travel content.
Follow
Nov. 02, 2017
•
5 min read 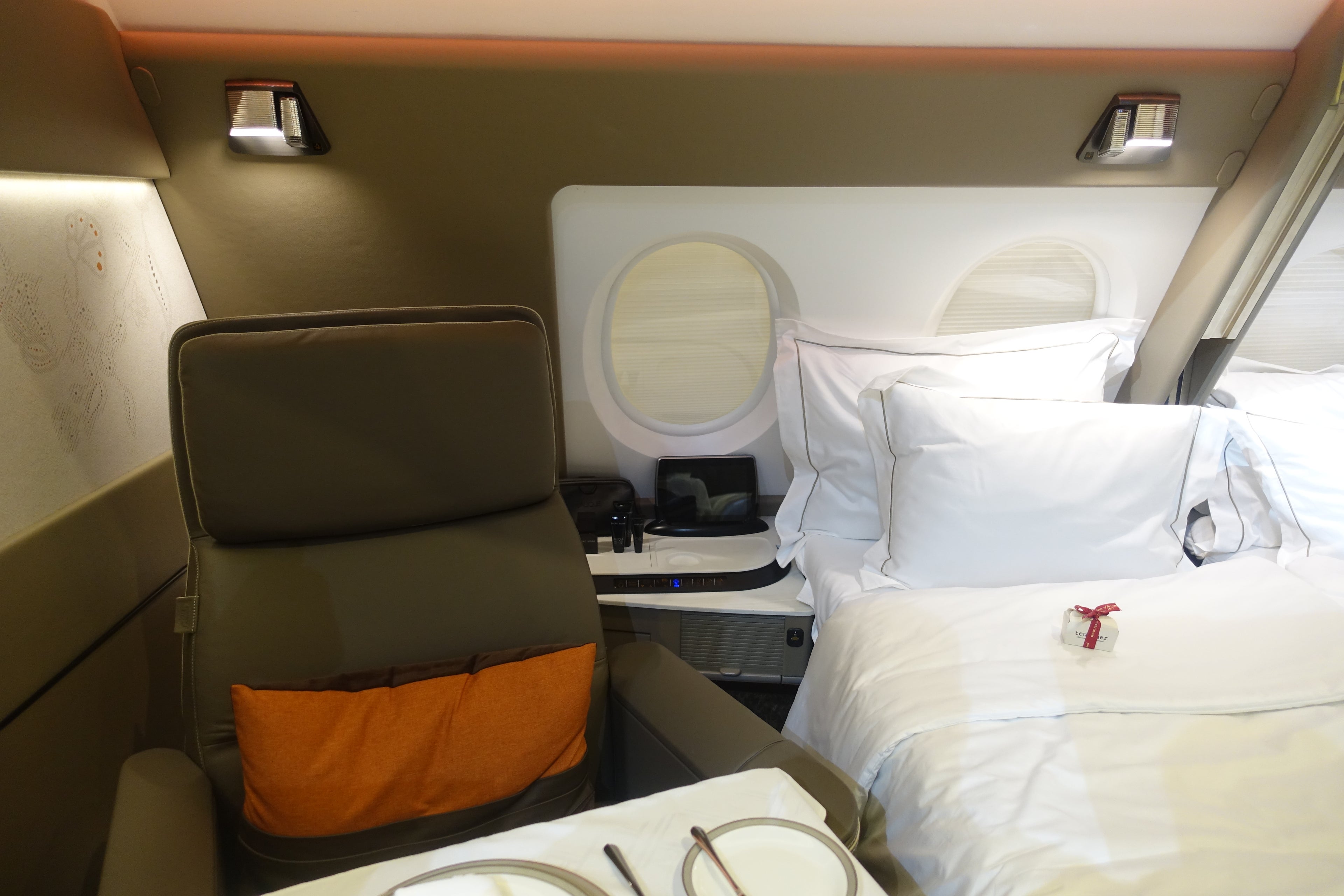 Here Is The New Singapore Airlines A380 Suites Product — and It's Stunning
This post contains references to products from one or more of our advertisers. We may receive compensation when you click on links to those products. Terms apply to the offers listed on this page. For an explanation of our Advertising Policy, visit this page.

We've known for a long time now that Singapore Airlines was planning on introducing a new Suites product on its new Airbus A380s that it's going to begin flying between Singapore (SIN) and Sydney (SYD) in December.

On Thursday, November 2, the airline's CEO, Goh Choon Phong, officially unveiled the new Suites and business-class products that will debut on the new A380, as well as improvements to its premium economy and economy products. Note that we didn't actually see the product on board an aircraft, but we had access to mockups of each product at a convention center in downtown Singapore.

Of course, the most exciting part of the unveiling was the new Suites class. Singapore Airlines turned commercial flying on its head when it introduced its original Suites in 2007, and it looks like it may be doing it again — these new suites look fantastic.

The Suites themselves are much more spacious than the current product. They're more like bedrooms in the sky, and feature both a 21-inch wide chair upholstered in plush leather by Poltrona Frau of Italy and a separate, fully-flat bed.

The chair has a motorized swivel function that allows you to sit in different positions. Plus, the seat reclines up to 45 degrees.

The bed itself measures 76 inches long, which is 6'4". On paper, that's a little short for TPG, but when he tested the bed out, he fit just fine. It's interesting to note, too, that the bed can be stored when not in use to open up the space even more.

Singapore Airlines introduced the "double bed" feature with its original Suites product, and the feature still exists in its second iteration. However, only the first two Suites of each aisle are equipped to be converted to a double bed, so if you're traveling with a companion, make sure you're choosing seats in the first two rows.

Each suite provides the utmost in privacy thanks to a sliding door and features a positively gigantic 32-inch HD monitor that can be adjusted such that you can watch comfortably from the chair as well as the bed. The pictures don't do the screen justice — it feels huge when you're sitting (or lying down) in front of it.

The new Suites product resembles the Etihad Residence in the sense that it has a separate and fully-flat bed in addition to a chair. However, it differs from the Residence in that each Singapore Suite is going to be much more spacious — there will only be six of them in the forward cabin on the upper deck of the A380 while Etihad squeezes nine Apartments and one Residence into that same space.

The Suites cabin will also feature two lavatories — pretty generous considering there will only be six Suites total in the cabin.

While there won't be a shower on board Singapore's A380s, Suites passengers will have plenty of space to freshen up, as one of the lavatories features a sit-down vanity.

During a Q&A session with the CEO, TPG asked if the airline was limiting KrisFlyer redemptions for the Suites product, as often there's very little availability. Goh responded by saying that the airline is committed to offering its members the chance to redeem miles for flights in all classes of service.

As a reminder, the first A380 with the new Suites product will be flying as of December 18, 2017 on the route between SIN and SYD. After that, the carrier plans to take delivery of four more new A380s and will perform a complete retrofit of the rest of its A380s by 2020. At the same event, SQ also unveiled its new business class product on the A380, which we cover in a separate article.