Too Crowded to Be Cool: A Review of the Turkish Airlines Lounge at Washington Dulles 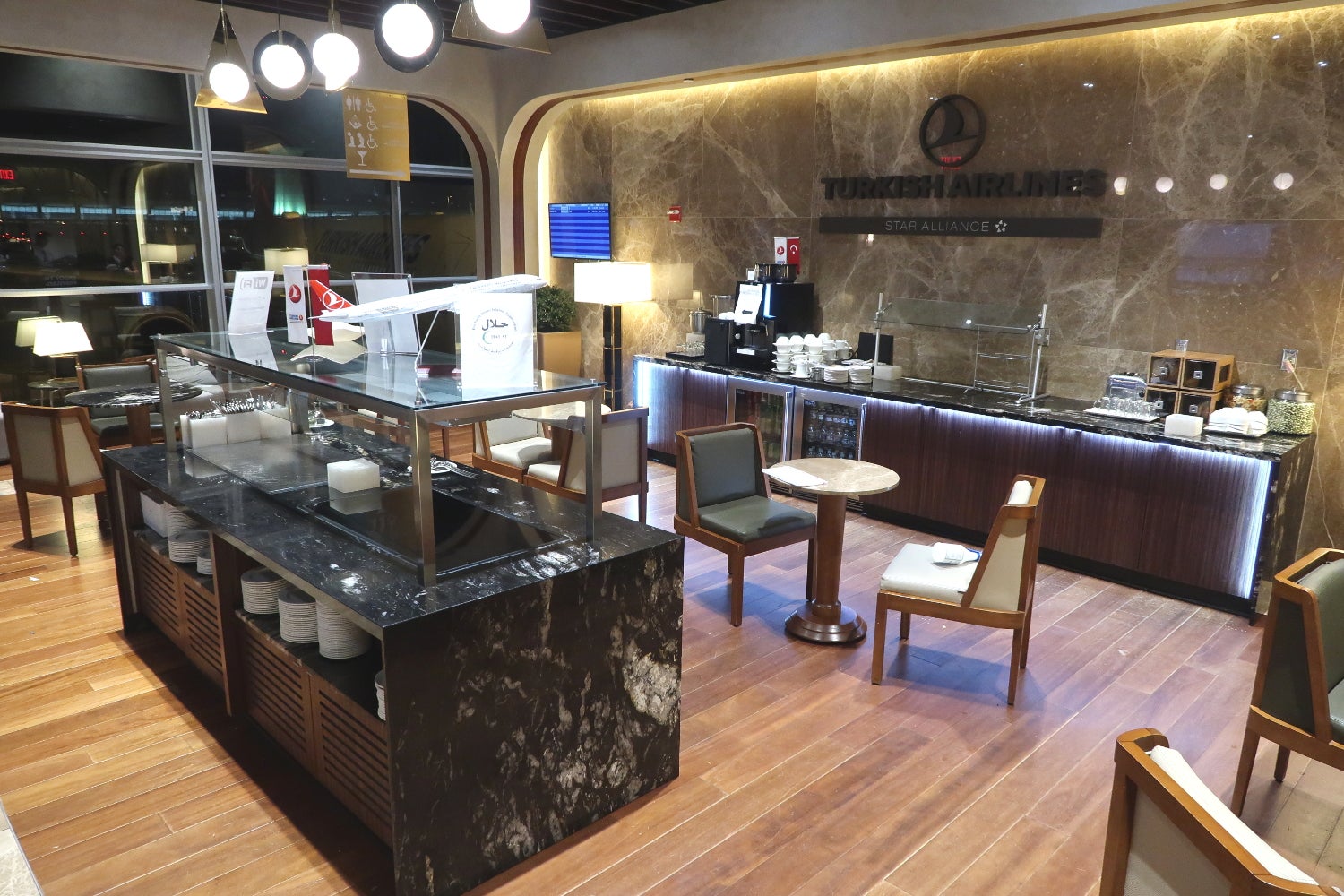 The Turkish Airlines lounge at Washington-Dulles (IAD) -- a member of the Priority Pass network -- is generally regarded as one of the strongest lounges in the whole system. TPG named this lounge in our list of the best Priority Pass lounges in the world. And, this lounge won the best quality of refreshments award from Priority Pass, out of over 1,200 lounges worldwide. Before a recent flight on Cathay Pacific's new A350-1000 business class from IAD to Hong Kong (HKG), I had some time to kill, so I hopped into the lounge to see what all the fuss was about -- here's my take.

My husband, JT, and I were flying a Oneworld airline, but we had plenty of ways to gain access to this lounge. I used the Priority Pass that came as a benefit of my Citi Prestige Card, but I have another card that came with the Platinum Card® from American Express. Alternatively, JT could have used any of his three Priority Pass cards, including one he received as a benefit of the Chase Sapphire Reserve.

The lounge is open 6am to 11pm daily and, unlike some of the other Priority Pass lounges at IAD, is open to Priority Pass customers the entire time.

A bowl of Turkish delight greets passengers at the entrance.

From the entrance desk, turn right to enter the lounge's main sitting area.

On the left side of this room is a buffet with hot and cold items. Along the left wall is a counter with coffee, tea, cheeses and desserts. Under the counter are two refrigerators with canned sodas and bottled waters. There are some small dining tables in this area, but most of the seating is on couches and lounge chairs.

I noticed that many of the lounge's chairs and other seating options were a bit worn, and some even had uncomfortable dips in the middle of the cushion from so many passengers sitting on them.

Along the right wall are six TVs. Headphones associated with a specific TV can be borrowed from the entrance desk, but be prepared for the staff to ask to see your boarding pass, and take note of the number of the TV you want to watch.

Along the far wall are large windows overlooking the apron -- though we couldn't see much since it was dark out. There's a sort of communal work station in the form of an oval table with two computers, but there were no outlets for charging your gadgets. And, the large screen behind this table was fairly distracting as its primary purpose was to display advertisements.

Near the wall of windows is a hall that leads to a second sitting area and bar. Halfway down is another hall that leads to two bathrooms, a prayer room and a shower room. Each of the four rooms are lockable and designed for use by one person at a time.

In the second sitting area, there's an island with various green plants and a padded bench all the way around its perimeter as well as more seats with small coffee tables.

There's a bar at the far side of the room.

There's also an upstairs sitting area in the lounge. Although the lounge was close to capacity when we arrived at 9pm, the upstairs area wasn't open. An attendant said it's only open from 2pm to 5pm.

Power outlets are available near most seats, but many of these outlets are hidden in inconvenient locations like on the floor under tables or behind couches. Some lounge seats have faux-marble dividers between the seats that contain outlets.

I was able to get connected to the Wi-Fi quickly and found the speed to be surprisingly good despite the number of people in the lounge who probably had their computers and cell phones connected to the network.

There are two single-person bathrooms between the lounge's two main sitting areas. There always seemed to be a line for these restrooms -- and the one I used was not exactly pristine.

There's one single-person shower room near the restrooms. There weren't any towels left when I poked my head in, although I could have inquired at the front desk if I'd needed to shower.

Shampoo, conditioner and body wash were provided in the shower in refillable pump-top bottles.

At the buffet I found hot items like chicken, cod, rice and two types of soup. The chicken was moist and nicely spiced, but the pitas weren't fresh.

There were also cold items like three types of dips for the pita bread (eggplant, hummus and yogurt dip), olives, couscous salad and cucumber salad.

Baklava -- the best I've had outside Turkey -- is available next to Turkish tea on a buffet bar against the wall. Nuts and a dried fruit mix are available in large jars. There's also decadent-looking bread pudding.

The coffee machine in the dining area was broken, but the machine in the bar could make simple coffee drinks like lattes, mochas and espressos. The mocha I tried was bitter, unfortunately.

A good variety of liquor, wine and beer are available from a staffed bar. I was pleasantly surprised to see Efes beer available.

After all the hype for this lounge, I was disappointed. Yes, there's a large variety of high-quality food and the alcohol options are ample. And the food certainly ranks above the best Priority Pass lounge food I've had in the US (that wasn't in a restaurant). But the lounge is small, and it was crowded during my visit. The crowds combined with the uncomfortable, worn seating, lack of charging options and the poor attitude of the check-in agent made it a disappointing visit. I'd certainly return for the food and drink, but I'd find another place to sit and relax during a long layover if this lounge is crowded again.