Articles
Summer Hull , aka Mommy Points, ran the Mommy Points site for families who want to travel more for less using miles and points for seven years. She now heads up a variety of special projects at TPG when she isn't exploring the world with her own two girls.
Follow
Nov. 16, 2018
•
11 min read 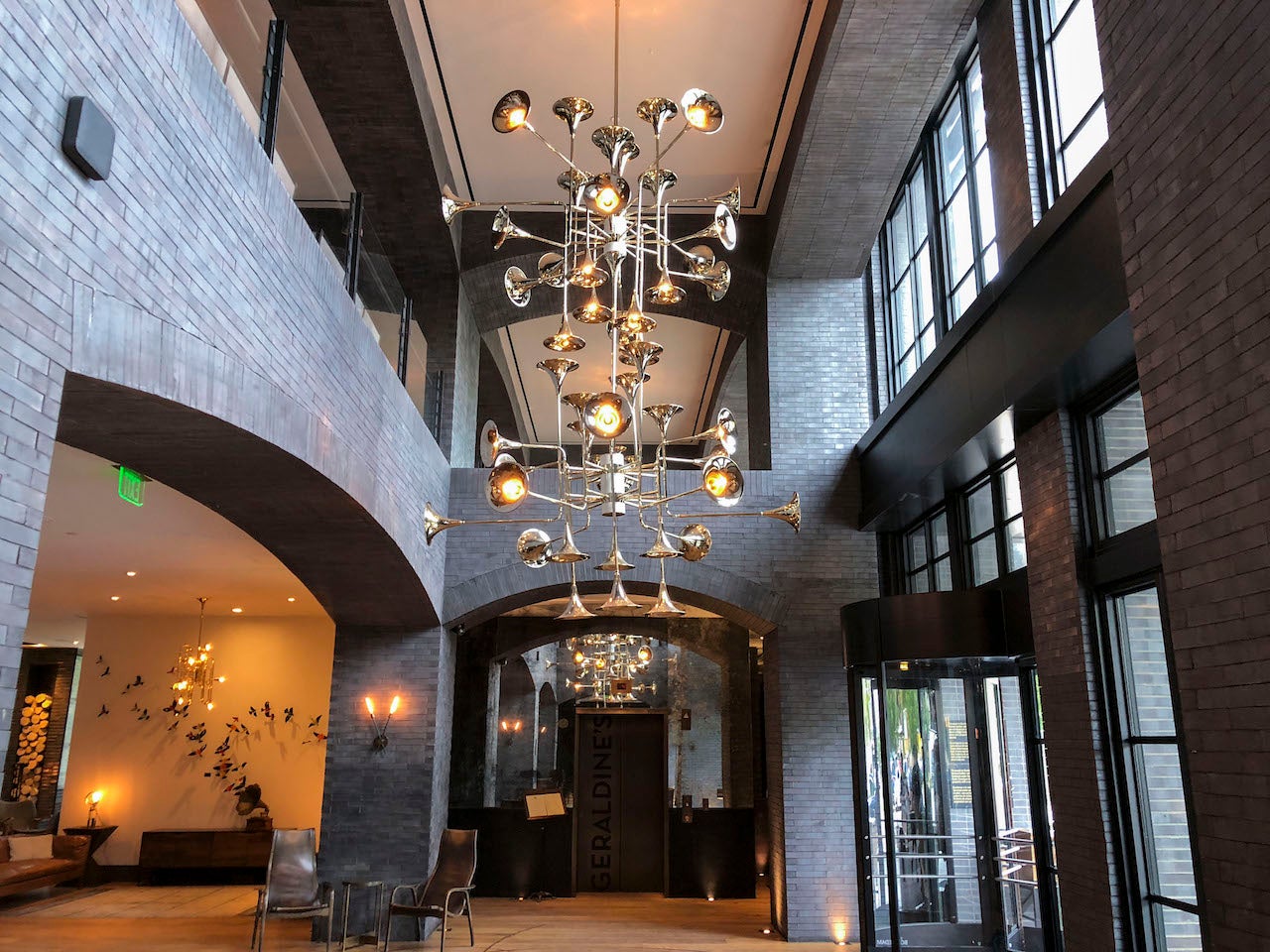 Austin is a cool city in the middle of Texas that is home to SXSW, Austin City Limits Music Festival and hundreds of live music venues. Austin has so much going on, it even lays claim to the nickname "Live Music Capital of the World". As hip and "weird" as the capital of Texas may be (and it is), the hotel scene hasn't always been all that invigorating or exciting. In fact, most of the hotels we've stayed at in and around Austin have been as bland as sugar-free, unflavored yogurt. For the most part, they didn't reflect the energy of the city in which they were located. (The Driskill being a hauntingly fabulous exception.)

Having lived in Austin for many years before children came along, we wanted to actually feel like we were back in Austin on a short family visit. So we went to the Kimpton Hotel Van Zandt.

To take advantage of existing IHG promotions and to earn as many points as possible during the stay, I booked directly with IHG. When you book a stay at an IHG property directly, go through a cash-back site such as Ebates to get up to around 10% cash back on your stay (rates vary, so check cashbackmonitor.com for current offers).

We could have used IHG points for the stay, but it would have cost 60,000 IHG points per night. TPG currently values IHG points at 0.6 cents each, meaning the stay would need to cost more than $360 per night to tip the scales toward the redemption. For our stay, rooms were going for $379 per night, which was basically right at the cutoff point. We ended up booking with cash as we wanted to earn points towards the ongoing promo. We put the one-night stay on my Chase Sapphire Reserve card, which earned me a total of 1,350 Ultimate Rewards points (worth $27) after factoring in parking, which cost a steep $45 per day (more on that later), taxes and fees. I also earned a meager 3,759 IHG points from my stay, worth just $23 according to TPG's latest valuations.

The Kimpton Van Zandt was in Downtown Austin on Rainey Street, adjacent to Lady Bird Lake. It seemed slightly hidden at first, but once you found the property (we just looked up — it was pretty tall), the location was ideal, as there wasn't much through traffic, because of the lake. We were minutes away from Downtown Austin hotspots such as the Warehouse District, Town Lake, 6th Street, Zilker Park and hundreds of music venues. (Austin boasts over 250 places to see live music!)

My oldest daughter had been lucky enough to stay at several Kimpton properties this year, and she'd memorized their "secret password," which unlocked goodies such as a complimentary in-room movies, minibar credit, free food or drinks and more. Unfortunately for my daughter, the secret password ended days before our stay (it will return later in the year), but the check-in agent promised to send something special up for her anyway.

Check-in was otherwise pleasant, uneventful and efficient, though the lobby itself was noteworthy. The Kimpton Van Zandt lobby was dark, mysterious and yet still welcoming. It was, in a word, cool.

There were worn-in brown leather couches, light fixtures made of musical instruments, dark bricks, a fireplace and a very Austin-infused vibe.

Our family of four booked a room with two queen beds that measured in at around 360 square feet. The wallpaper and carpet were a fun blue color with earth-toned accents.

Speaking of blue, from the window you could see the extremely hip pool deck below and on toward Lady Bird Lake.

The beds themselves had white linens and were plenty comfortable after a long day of exploring Austin. As a family traveler, I'm always appreciative when hotels opt for queen beds that can indeed each hold two people rather than double beds that, frankly, cannot hold two humans.

The artwork in the room carried the Keep Austin Weird theme with musical nods and references to the city's famous bat population.

Kimpton properties have in-room minibars, but what makes that a nice feature is that IHG elites get a $10 "raid the bar" credit with each Kimpton stay ($15 in New York City). This credit can be used in the hotel's actual bar for a beverage or in the minibar. You can get automatic IHG Platinum Elite status by having the IHG Rewards Premier Credit Card, more than enough elite status to score you the $10 credit. Should you wish to stay four nights on points, that card would also give you the fourth night free award.

The bathroom in our room at the Kimpton Van Zandt had a separate vanity area with a sink, and the actual bathroom was separated with a pocket door (heavy and hard to close). I liked the separation of the two areas, but families should note that the room with two queen beds still only had a shower.

It was a nice shower, but younger kids who aren't yet ready for showers may have a bit of trouble. Our 3-year-old is used to adjusting to baths or showers, thanks to our travels, but it was a little jarring the first time she had to make that transition.

Kimpton properties aren't typically inexpensive, but there were nice touches and inclusions here. For example, complimentary morning coffee and tea was available in the lobby. In the evenings from 5pm to 6pm, there was a social hour that typically consisted of beer and wine and a local specialty, margaritas! We weren't able to partake in the social hour on this trip, but grabbing a couple of free drinks in the evenings could easily save you $20 to $30.

Speaking of complimentary treats, after my daughter's failed secret-password attempt at check-in, the hotel promptly sent up warm chocolate chip cookies and cold milk for both girls to share.

Not only that, but when we got back to our room later that evening, there was a second round of cookies with cold milk and crayons! Again, the room rate was not insignificant, but these touches didn't go unnoticed.

Our schedule was jam-packed, so we didn't eat at the hotel on this trip, but I did take a peek at the fourth-floor dining and cocktail haven, Geraldine's.

It was a sit-down restaurant and bar, and had a stage that played host to live music acts.

Downstairs on the lobby level was a grab-and-go market, Cafe 605, open from dawn to well after sundown (6am to 10pm). On this menu we saw coffee, juices, salad, melts, pastries and desserts.

On the same level as the restaurant and bar was the outdoor pool, which seemed to be quite the scene on warm weekend days. In fact, it was so much of a scene that this wasn't a good place to take the kids swimming unless you went at very off-peak times, such as early in the morning (or in the rain).

There were complimentary bikes available for Downtown Austin exploration.

Like all Kimpton hotels, this property was pet-friendly, so your critters could stay with you at no extra charge and no set size limitations. For families, there were rollaway beds and connecting rooms.

The hotel had a 24-hour gym, but skip that and take advantage of staying right next to the 10-mile hike-and-bike trail around Lady Bird Lake. There were also a variety of nearby outlets to rent stand-up paddleboards and kayaks.

The only thing I didn't love about the Kimpton Van Zandt was the $45-per-night valet charge. While not exactly an apples-to-apples comparison, the Hyatt Regency Austin on the other side of Lady Bird Lake charged $32 per night for valet parking and permitted self-parking for $26 per night. Parking charges at the Kimpton Van Zandt were in line with the W Austin's valet charges, but it still felt high for overnight parking in Texas.

The Kimpton Hotel Van Zandt captures the flavor and feel of Austin within its four walls. There are included margaritas, live music, a relaxed yet sophisticated ambience and immediate access to the sights and sounds of Downtown Austin. This property is the right choice for a couple's getaway or a friends weekend, and it even met our needs for a family weekend away. It is not an overtly family-friendly hotel, but the room layout and kindness of the staff made our family feel right at home.

The hotel is pricy at 60,000 IHG points per night, with paid rates often north of $300, before you even get to the nightly parking charges. This is by no means the most budget-friendly lodging in Austin, but it is one of the few Austin hotels that feels like the eclectic, diverse and vibrant city. I hope to get back to the Kimpton Van Zandt for another short stay in Downtown Austin, but it would not be my choice for a longer stay, as the prices would break the bank in short order.

For more budget-friendly Austin hotel ideas, check out the Hotel Indigo Austin Downtown or the Hyatt Place Downtown Austin. But if your points or cash budget can take the hit, I recommend giving the Kimpton Van Zandt a shot.

Images courtesy of the author.

Related stories
Legislation that could gut credit card rewards set to move through Congress
Would you stay at 1 of these 8 haunted hotels this Halloween?
Southwest winter flash sale: Get one-way flights for as low as $29
You can currently buy points and miles with up to a 100% bonus — but should you?
Featured image by Kimpton Van Zandt in Austin (Summer Hull/The Points Guy)
Editorial disclaimer: Opinions expressed here are the author’s alone, not those of any bank, credit card issuer, airline or hotel chain, and have not been reviewed, approved or otherwise endorsed by any of these entities.