The worst 5 business-class cabins in the sky today 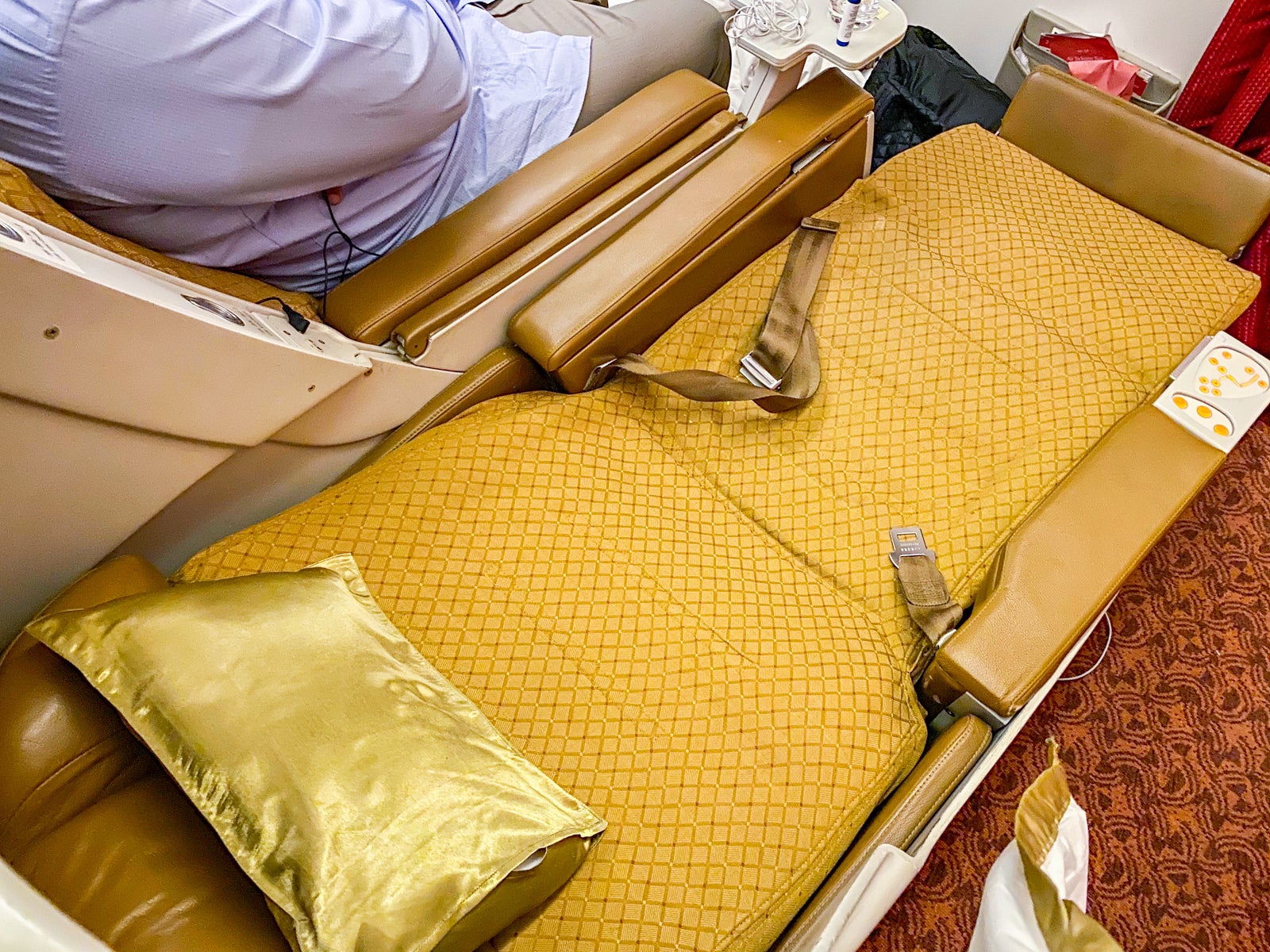 We already brought you TPG's top-rated business cabins in the sky today. Now, it's time for the worst.

We haven't put this list together to name and shame, but rather to help you when trying to work out where to spend your hard-earned miles. This roundup of the worst-scoring business-class cabins from our reviews comes after our recently published top and worst premium economy cabins as well as the best business-class cabins.

Some might argue that 62 isn't a terrible score out of 100, but when we reviewed well over 40 business classes, fifth from bottom place leaves a lot to be desired.

The one saving grace for this flight was the seat itself. TPG contributor Ethan Steinberg liked the popular reverse-herringbone seat onboard China Eastern's 777-300 on his flight from Shanghai (PVG) to New York (JFK) and said "It was one of the best hard products I could've hoped for."

That said, why such a bad score? Well, it seemed that the aircraft and cabin had endured its fair share of wear and tear and was being held together in places by bright red duct tape.

The IFE was a huge let down, as the in-flight map and Wi-Fi didn't work throughout the entire flight and the headphones were cheap. The slippers were a nice little perk to take away from the measly blanket that was available for sleeping. There was no duvet, mattress topper or extra pillow in sight.

Let's move onto the real deal-breaker, the food, which only scored a total of 8/25. Ethan was quickly informed that there would be no soup or dessert, as it was an evening flight -- very bizarre.

What followed was a procession of cheap, lazy and bland meals that included a slimy salad, far too much overcooked rice, flavorless veggies and a "disgusting" beef tendon, served on none other than an economy-esque meal tray. This sorry state of meal affairs meant that he was hungry for most of his flight, and ended up snacking on packets of chips from the galley to curb his hunger.

You might be surprised to see Lufthansa featured in the worst scoring business-class category. It was mainly down to an aging aircraft and poor meal service.

Though TPG Editor-at-Large Zach Honig was sitting perhaps the most spacious of all of Lufthansa's business-class seats in its fleet (4D on the 747-400), the main cabin behind the nose of the 747-400 is quite densely configured (2-3-2) for business class with no direct aisle access for every passenger.

Despite the bonus of having no seatmate, the seat felt exposed, there wasn't much storage and the massage function seemed to be stuck, which made an already-uncomfortable hard mattress even less comfortable.

The age of the old bird shone through with the IFE, which "was in desperate need of an overhaul." The terrible interface with a smaller-than-average 15-inch screen shaved a good few points off the IFE and amenities score. However, with no less than 177 films and more than 300 TV shows, the variety of content slightly made up for where the rest was lacking.

Related: Flying across the ocean? Use your IFE to watch for shipwrecks

The food and beverage were also subpar by Lufthansa's standards. Zach did, however, enjoy the alcohol selection on board, having had not just one, but three drinks before his dinner started to arrive. There were several little hiccups in service along the way like being the only passenger not offered pepper, and a crew member forgetting to bring crackers for the cheeseboard. On the topic of cheese, there was none at all to be found in the mac 'n' cheese that accompanied the fillet of beef. Then, before landing, the breakfast of bland and spongy eggs rounded off the flight on a disappointing note.

It's worth noting that Lufthansa's business class on its newer 747-8 version of the jumbo, scored a considerably better 83/100 on a flight from New York (JFK) to Frankfurt (FRA).

Also scoring 61 was Egyptair's 787-9 on a flight from Cairo (CAI) to JFK. Flown also by Zach Honig, he remarked that the cabin is a vast improvement to the angled business-class seats of the airline's older triple sevens. Overall, he was impressed with the space, privacy and storage that his seat provided, but a larger or second pillow, as well as mattress topper, would have given that lie-flat seat a more bed-like comfort. The lack of personal at-seat air vents was also a disappointment for Zach, as it would be for many passengers who get hot when sleeping in-flight.

It was all downhill from there. The cheap headphones provided poor sound quality and there were only 19 films in English on the in-flight entertainment system that crashed many times.

As a dry airline, no alcohol was served at all during the flight. While we can't take off marks for that, it's worth noting if you like a good slurp while flying. That said, Zach's welcome drink alternative was a rather pleasant tea with ginger and cinnamon. The food he was served was really not up to business-class standards and included a very oily "Oriental" breakfast dish and everything in the second main-meal seemed to have been cooked for far too long.

To add insult to an already-injured overall score, the crew strangely kept two out of the three business-class lavatories locked for the entire flight and the level of cleanliness, hygiene and overall washroom etiquette — even by the cabin crew — was shameful.

At second-to-last place, this is where we really start to see some serious shortcomings -- this time with the hard product and the onboard service.

Air Tahiti Nui's 2-2-2-configured business-class cabin is probably "better suited as a premium domestic seat" on shorter flights, as not every seat has direct aisle access and there was a distinct lack of privacy. While the seats were indeed fully lie-flat, they were only two-and-a-half inches wider than economy seats on most Airbus A350s. There also wasn't much storage in the seats, which can be an annoyance if you have to keep getting possessions out of the overhead lockers.

One perk for was the solid enough quality of the Air Tahiti-branded headphones. That's about as good as it got with the IFE, as the selection of content was a lot smaller than you might expect. There was no live TV or tail cam, and the Wi-Fi didn't work.

This flight lots several marks for the service which was described as "bipolar." Drink refills weren't proactively offered and on one occasion even a request for Grand Marnier was refused by a member of the crew because it's saved for digestifs only.

A final gripe was the lack of communication in English by the crew. While it's understandable that it was a French-speaking airline, transporting passengers from France to French Polynesia, albeit via LAX, the crew continued to address English-speaking passengers in French, even though they knew the passengers didn't speak the language and they also seemed to know English.

At a very measly 46/100, Air India's 777-300ER takes the spot for the worst business class we flew last year at TPG and the worst TPG's Sam Rosen had ever experienced in her life.

For starters, a 2-3-2-configured business-class cabin isn't the most favorable, though some airlines, like BA, still have a 2-4-2 configuration on some of its aircraft.

The seat was far from premium. It didn't lie fully-flat, it was narrow, uncomfortable and downright dirty, and there was a distinct lack of storage. The very basic blanket and uncomfortable pillow didn't improve things much. Oh, and the dirty theme continued into the lavs.

The IFE was, well, pretty much just a screen on the wall. Controlling it meant scrolling with a cursor, as there was no touch screen capability. The choice of movies was poor by anyone's standards, and the moving map showed "no flight data available" -- an AvGeek's nightmare. The control itself was dated and was sometimes activated simply by resting an arm on the armrest that it was housed in. The headphones were flimsy and uncomfortable. At this point, you're not likely to be surprised that there was no Wi-Fi at all to speak of.

Though the food wasn't terrible, the whole experience felt very economy. There were no menus for food or drinks, and when Sam asked what there was to eat she was told quite simply "vegetarian or meat." The entire meal was served at once on a tray.

The most comedic element of all was the drink cart that came through the cabin two hours before the end of the flight, laden with alcohol and just after breakfast. A bizarre ending to a very bizarre almost 20 hours on an Air India aircraft.

As for the service? Here's Sam's summary: "Horrible, terrible, no good, very bad." The crew never smiled or said thank you and Sam felt like she was an inconvenience. You'd expect more from Ryanair.

Knowing what to avoid when you're thinking of splashing out on those business-class tickets can be very handy. From uncomfortable seats, terrible service and inedible food -- there's certainly room for improvement for many of these airlines. While the experiences our TPG staffers had on these flights might not be the standard for the airlines in questions, it's worth remembering that while service failings could be improved with different crews, the subpar hard product as well as the food and drink fiascos on these flights are more than likely to be consist offenders by these airlines, on these aircraft and on these routes.

Don't forget to check out our roundup of the top five and worst five premium economy cabins in the sky.