Solo seat in the nose: A review of Lufthansa's 747-400 in business class from Seattle to Frankfurt 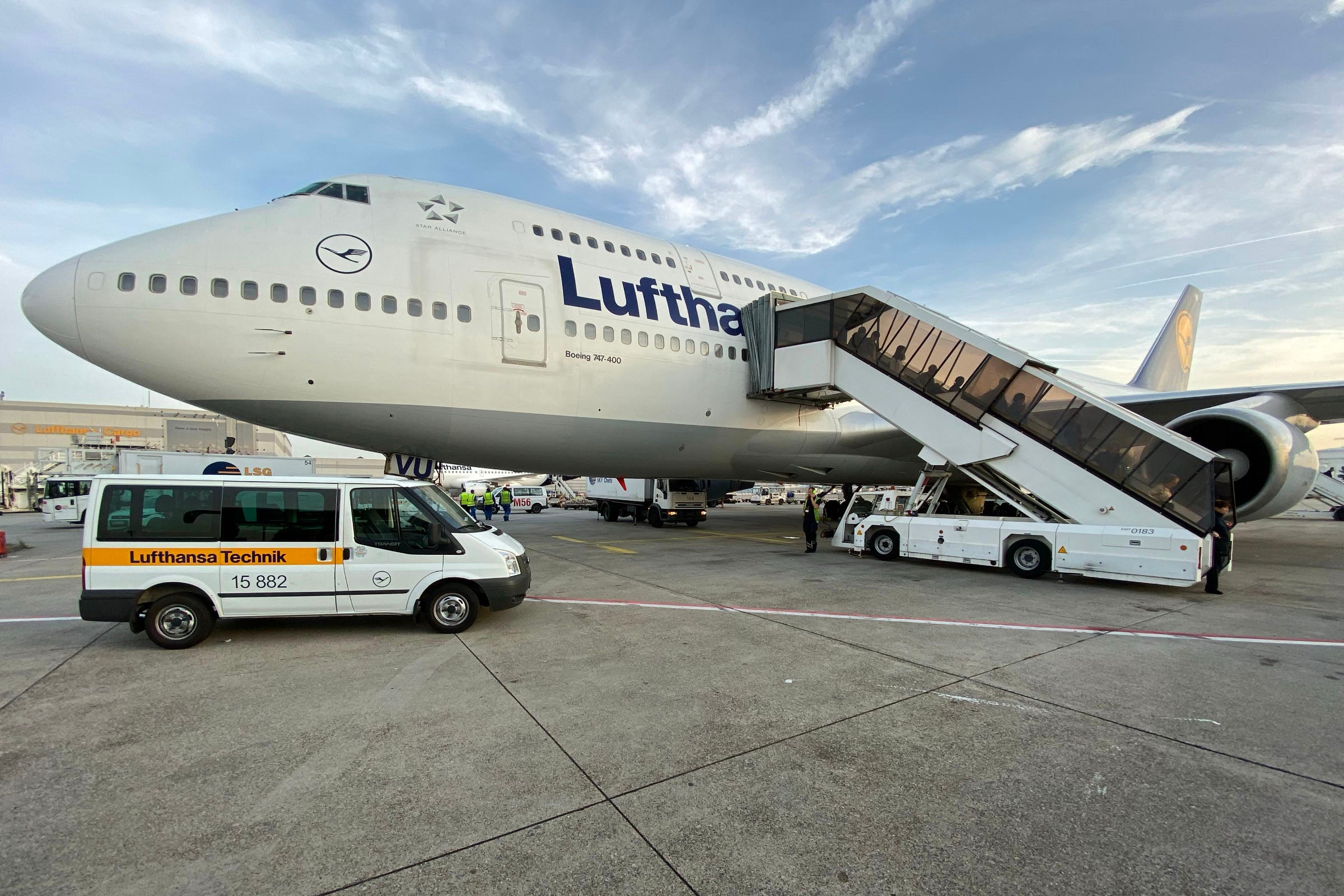 Solo seat in the nose: A review of Lufthansa's 747-400 in business class from Seattle to Frankfurt
This post contains references to products from one or more of our advertisers. We may receive compensation when you click on links to those products. Terms apply to the offers listed on this page. For an explanation of our Advertising Policy, visit this page.

This fall, I needed to make my way from seeing the northern lights in rural Alaska to joining the TPG team at PeaceJam in South Africa, with a very firm timeline to boot. Ideally, I would have worked in an overnight stay at home to swap clothes and recuperate in New York, but there wasn't even time for that — so, a multiple-itinerary journey from Coldfoot, Alaska, to Cape Town, South Africa, it was!

The one-way journey ended up being 13,000 miles in total, with the longest segments all falling under one United award ticket, with flights operated by Lufthansa and South African Airlines.

One-way business-class fares from the West Coast to Cape Town, South Africa (CPT), can easily approach $7,000, so I was very fortunate to find saver-award availability on Lufthansa and South African that got me from Seattle (SEA) to Cape Town just about as efficiently as possible, given that United's Newark (EWR)-Cape Town nonstop had yet to launch.

We redeemed 80,000 MileagePlus miles plus about $50 in taxes for the ticket, worth $1,120, based on TPG's valuations — a phenomenal redemption given the cost of a paid itinerary.

I also had an opportunity to experience both Lufthansa 747 variants, sitting in the nose on the Boeing 747-400 for this first leg from Seattle to Frankfurt (FRA), and on the upper deck of the much newer 747-8 for the flight to Johannesburg (JNB).

Since I was connecting from Fairbanks (FAI) on Alaska Airlines and a bit short on time, I began my SEA adventure airside. I had to make my way from the North Satellite terminal to the South Satellite terminal, but the train was fairly easy to navigate, and there wasn't any need to pass through security again.

The South Satellite terminal was undergoing a renovation, so it was a bit of a mess — there were a few stores available, but I wouldn't plan on spending any more time there than you must.

The terminal was limited on the food front, too, with a crowded food court and a few standalone restaurants, which were all packed as well.

As a Lufthansa business-class passenger, I had access to The Club at SEA, which also accepts Priority Pass customers beginning at 2 p.m.

The lounge was very crowded, but I was able to find a seat at the back of the main room.

The food was more diverse than what you'd find at a standard U.S. airline lounge, perhaps, but they were lacking by international standards.

Some of the cold items included a couple of wraps and a salad bar.

There was also a vat of super-gooey mac and cheese (yum!) and soup.

Interestingly, all of the liquor was kept behind a bar. Guests were prompted to ring a bell for service.

Soft drinks, coffee, tea and water were available, as well.

The best thing about the lounge was definitely the Wi-Fi — it was more than sufficient for finishing up some last-minute work.

From there, I headed out to the crowded gate area, where there were barely any open seats.

After what seemed like an especially long wait at the gate, boarding was finally called at 1:25 p.m., just 25 minutes before our scheduled departure. Despite the delay, Lufthansa managed to board an entire 747-400 in just 20 minutes, getting us off the gate just two minutes behind.

Most of the seats are in a four-row cabin behind the nose in a dense 2-3-2 configuration. I'd absolutely avoid sitting here — the nose and upper deck are much more interesting, with a more favorable layout, too.

Had I not been so excited about trying out Lufthansa's odd single seat, 4D, I would have certainly snagged a spot on the upper deck.

Instead, I was making this journey in the small cabin up front. That's my seat just below the giant Lufthansa logo on the wall.

The first row was unusual, as well — I'd never seen this many premium seats crammed into the nose.

The 747-400 is the only plane in Lufthansa's fleet to offer a standalone business seat. Because of the curvature of the plane, there was room to squeeze in one extra passenger in Row 4.

I was happy to be sitting all alone, but I immediately noticed that 4D felt especially exposed.

I was immediately jealous of the passengers in 4A and 4K. None of Lufthansa's business seats offer much storage, but neither of my neighbors had a seatmate on this flight, so they ended up with far more space than I had in 4D.

My storage was limited to a compartment under the ottoman and a small enclosed area to the side, which couldn't hold much more than the water bottle and amenity kit that were already there.

I was hoping to find somewhere to store and charge my iPhone under the armrest, but there was just a dedicated tray-table compartment in there.

The provided noise-canceling headphones took up the only other storage spot, too, so I ended up keeping my phone in my jacket, instead.

The seat controls were fairly intuitive, but my massage function appeared to be stuck. As a result, my seat continuously inflated and deflated a little throughout the flight. It was also quite firm in bed mode, making it hard to get comfortable at first.

My unusual standalone seat seemed to be a curiosity to other passengers, and I almost felt like I was on display. As we deplaned, another flyer remarked that I'd slept for much of the flight, so I was clearly within view during the journey to Frankfurt.

There was a pair of lavatories for the lower-deck business passengers between the two cabins. Both were standard and dated 747-400 lavs.

Lufthansa had an amenity kit already waiting at my seat (in that small storage compartment), stocked with a dental set, disposable socks, an eye mask, earplugs, lip balm and cream.

The carrier also provided Denon noise-canceling headphones. I wasn't in love, but they worked far better than the headphones you find on most other carriers.

There was a dated, 15-inch inflight-entertainment system at the front of the seat, which tilted up for easier viewing when I was sitting upright.

Lufthansa's IFE system was in desperate need of an overhaul — the interface was terrible, and it was very difficult to control, since I needed to use the awkward wired remote instead of a touchscreen.

There was a good mix of content: 177 movies and more than 300 TV shows. I just wished I'd been able to access it without so much effort.

Ugh, this remote — I'm getting frustrated all over again just thinking about having to use it.

The moving map worked well, but it wasn't high-definition and ran in a loop.

Lufthansa offered three Wi-Fi packages, including an $8 plan limited to just 64 kbps, a $20 400 kbps plan, and a $34 package that included up to 1 GB of data without a bandwidth cap.

That last package seemed like the best pick. Though expensive, it seemed more reasonable given the duration of the flight. The performance was a bit lacking, though, and I wasn't able to do much more than send emails and texts.

Each seat also had a universal power adapter, which worked just fine to charge my laptop and phone.

I boarded hungry, since I began the day with a very early flight from Fairbanks and it was pure chaos in the lounge.

Lufthansa had a pretty robust selection of food and beverages, including a few hearty items I figured I might enjoy.

The wines sounded interesting, as well. I had a sparkling rose.

About 45 minutes after takeoff, I ordered a weissbier ("white beer," a German wheat beer), but the flight attendant misunderstood — or, really, I'm sure I just mispronounced it — and brought me a Warsteiner.

A half hour after that, it was time to begin the main meal service. I started with the salmon tartare, which was served with a seaweed salad.

When the bread basket came around, I picked what looked like a pretzel roll. It was cold and not especially soft, though, so I didn't eat much.

Thirty minutes later, my entree of beef filet with shrimp mac 'n' cheese arrived, along with a side salad.

Oddly, my mac 'n' cheese didn't have any cheese — not one bit. I pointed that that out to the flight attendant, who chuckled a bit then said "OK" and walked away. He also offered fresh ground pepper to some of the passengers, but skipped over me. Perhaps he didn't want to be part of the show over at Lufthansa's most-exposed business-class seat, 4D.

Another half hour passed, and it was time for dessert. I went with the cheese plate, a cup of ice cream and a glass of scotch. The flight attendant asked if I wanted any crackers with my cheese, and I said yes, but then he walked away to grab some and never returned.

Later, I was offered after-dinner chocolates. Quite the delight!

Breakfast was served 90 minutes before landing and consisted of fresh fruit, eggs, and smoked salmon with bread, all presented on a single tray.

The fruit tasted fresh, but the eggs were bland and spongy, so I focused on the cold items.

The crew seemed friendly, but they weren't fantastic about providing attentive service. For example, my garbage was only collected when I asked, and several items were overlooked. It was also challenging to get their attention at times -- both flight attendants had to walk past my seat to serve the cabin, but they seemed to be masters at averting my politely beckoning gaze. It also took several minutes for someone to respond to the call button, which isn't ideal, especially in a premium cabin.

As much as I liked having a guaranteed solo seat without anyone next to me, Lufthansa's business-class product just felt so dated. The food and service were a letdown, too, the inflight entertainment system was tricky to use, and the Wi-Fi didn't work nearly as well as I would have liked.

All that said, I flew halfway across the world in a lie-flat seat for 80,000 miles, including two flights on a 747. That's hard to beat.