Articles
Kaeli Conforti is a digital nomad and has been backpacking solo around Southeast Asia, Australia and New Zealand since January 2018. She loves inspiring others to travel the world and create their own adventures.
Follow
March 15, 2020
•
7 min read 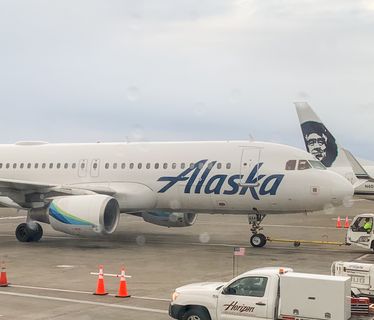 On the heels of an increased offer for the Alaska Airlines Visa Signature® credit card — which comes with 40,000 bonus miles, a $100 statement credit, and Alaska's Famous Companion Fare from $121 ($99 fare plus taxes and fees from $22) when you make $2,000 or more in purchases within the first 90 days of opening your account.— we asked our TPG Lounge members to share their best-ever award redemptions through the Alaska Airlines Mileage Plan program.

Here’s a look at some of our favorite answers. (Some responses have been lightly edited for style and clarity).

From memorable redemptions between North and South America to flights in some of the best business- and first-class products in the skies, our TPG Lounge readers never fail to impress us when it comes to redeeming miles for incredible experiences.

"Fairbanks (FAI) to Anchorage (ANC) to Los Angeles (LAX) to Dubai (DXB) for a stopover to Hong Kong (HKG) for a stopover to Tokyo (NRT) for a stopover to San Diego (SAN) to Seattle (SEA) to FAI — all in first class on Alaska Airlines and Emirates and in business class on JAL for 250,000 Alaska miles. We live in Fairbanks and wanted to visit Dubai, Hong Kong and Tokyo. It was a great 2.5-week trip. I should mention I was also 26 weeks pregnant at the time." — Lauren F.C.

"200,000 Alaska Airlines miles for a round-trip flight from Seattle (SEA) to Bangkok (BKK) in first class on Emirates. I got that trip right before they raised the charge for miles and it was awesome." — Kathy V.

"120,000 Alaska Airlines miles to fly from Los Angeles (LAX) to Sapporo (CTS) on Korean Air when they were a partner, in business-class round-trip. And it was my first time on an A380!" — Paul L.

Memorable vacations to Oceania and beyond

Several TPG Lounge members wrote in about how they'd been able to redeem Alaska miles for trips to Australia, Africa, New Zealand and the South Pacific.

"It was a ridiculous number of miles, something like 200,000 per person one-way, but in first class on Emirates from Seattle (SEA) to Johannesburg (JNB) thru Dubai (DXB) and was totally worth it! Plus, we had the entire first-class cabin to ourselves on both legs. An incredible experience." — Amy D.

"I stocked up on Alaska miles last year in order to book a trip to Fiji and New Zealand in business class. Just haven't had time to go yet." — David P.

"My two best-ever redemptions were from using Alaska miles. The first was flying in a Cathay Pacific A350 in business class from Dublin (DUB) to Hong Kong (HKG) — a route that has since been discontinued — for just 42,500 Alaska Airlines miles plus $42 in taxes and fees. The second was the "unicorn redemption," also known as Qantas business class from New York-JFK to Los Angeles (LAX) to Melbourne (MEL), an 18-day stopover and open-jaw flight, then from Brisbane (BNE) to Perth (PER) in Qantas' domestic business class. All that for 55,000 Alaska miles and just $49 in taxes and fees." — Matthew T.

Related: How to earn miles with Alaska Airlines Mileage Plan

"80,000 Alaska miles to fly in first class round-trip to Australia with a stopover in Fiji on Fiji Airways, coming up in November. All of it is in first class except the Los Angeles (LAX) to Seattle (SEA) leg on my return trip home, but I'm counting on getting upgraded." — Leandro V.

We love it when our TPG Lounge members get so involved in a topic they end up helping each other with advice based on their own experiences. That's what happened when TPG Lounge reader Kabir G. responded to a post by David P. about a tricky redemption he made for the same itinerary he's looking to do himself later this year.

"From Seattle (SEA) to Tokyo (NRT) — stopover — to Singapore (SIN) in JAL business class because first class wasn't available. 65,000 Alaska miles one-way. I love JAL's Sky Suite product, which is probably my favorite business-class hard product, although I've also been in Delta One, JetBlue Mint, Singapore Airlines' A350 and 777, KLM 777, ANA 787, Lufthansa 747 and some others that aren't worth mentioning." — David P.

"I'm actually considering booking this exact itinerary for my girlfriend and me over Christmas and New Year's. Found availability in business class for both flights. I'd been hoping to fly in first class since it's only 10,000 more miles, but JAL's business class looks amazing, too." — Kabir G.

"JAL doesn’t fly first class out of Seattle, I think. You can always book business class and keep monitoring, and if first class opens up out of Los Angeles, just pay the $125 per person change fee to book first class." — David P.

"There’s actually zero award availability on the direct Seattle flights. San Francisco (SFO) to Tokyo (HND) is wide open in J, so I’ll probably be planning on that. Good idea about monitoring for first-class availability though, thank you!" — Kabir G.

"When I booked mine initially, there was only Seattle (SEA) to San Diego (SAN) to Tokyo (NRT) to Singapore (SIN). Seattle then opened up availability about two weeks in advance. I think LAX might have opened up a first-class ticket but I would have needed to change again and also fly to LAX, so I went with the more direct flight." — David P.

"Good to know! Plus Alaska is giving a waiver for a free change on all flights booked during March for travel through Feb. 21, 2021, so I could always change it if something better becomes available." — Kabir G.

Related: How points and miles got my 79-year-old mom home in first class before a coronavirus lockdown

Related stories
How to check your business credit score
How to save on a cruise: 33 money-saving tips from an expert cruiser
Hyatt elites are now eligible for instant American Airlines elite status — what you need to know
9 things to do when you get the Amex Business Platinum Card
Featured image by (Photo by Clint Henderson/The Points Guy)
Editorial disclaimer: Opinions expressed here are the author’s alone, not those of any bank, credit card issuer, airline or hotel chain, and have not been reviewed, approved or otherwise endorsed by any of these entities.

Our points-obsessed staff uses a plethora of credit cards on a daily basis. If anyone on our team wouldn’t recommend it to a friend or a family member, we wouldn’t recommend it on The Points Guy either. Our opinions are our own, and have not been reviewed, approved, or endorsed by our advertising partners.
See all best card offers
Related stories
Guide
How to check your business credit score
Guide
How to save on a cruise: 33 money-saving tips from an expert cruiser
News
Hyatt elites are now eligible for instant American Airlines elite status — what you need to know
Guide
9 things to do when you get the Amex Business Platinum Card